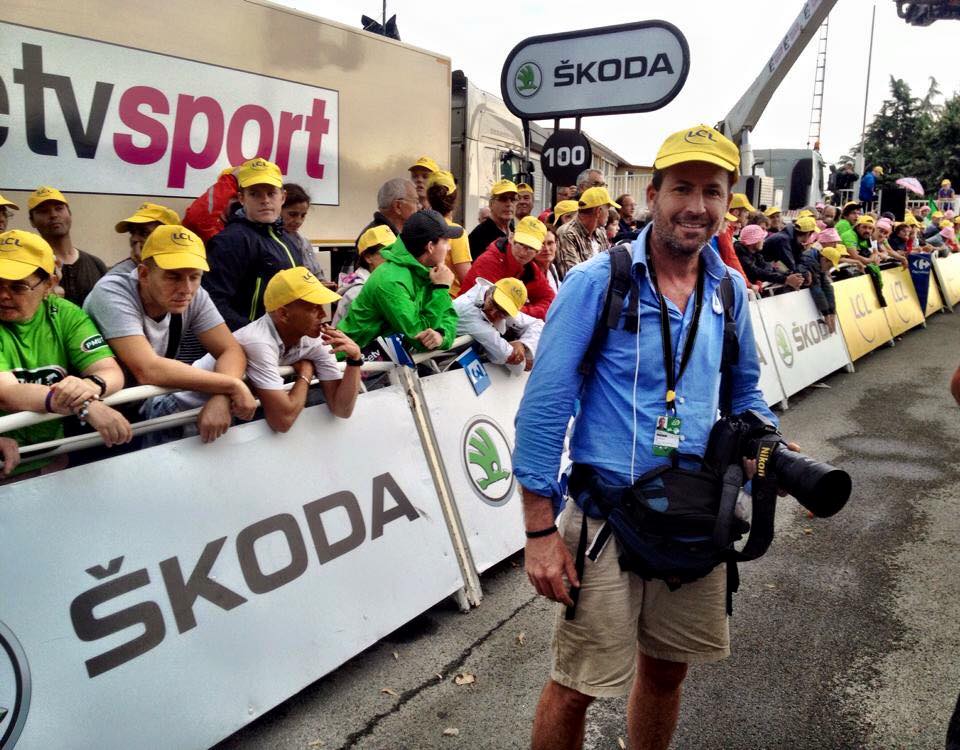 Following your passions, what is your own language, is always going to be the way to fluently express and continue to develop yourself. A Mackerel Beach gentleman since a toddler, Nat Bromhead stuck to what interested him, what keeps his mind moving and worked at it until a love of fishing and a gift for English saw his first byline appear in Bush 'n Beach Fishing Newspaper in 1998. Nat kept working, became a journalist, online editor and photographer for other Queensland-based newspapers and now is an established Editor and photojournalist.

Mr. Bromhead is also the proprietor of Pittwater Photography, capturing those excellent and beautiful images of Pittwater we have, on occasion, been fortunate to share with readers. Some more of these run as October 2015’s Artist of the Month exhibition.

Sydney in 1970. My family lived at Eastwood and we had a little shack at Mackerel Beach that I apparently was first taken to at about 3 months of age. I met our neighbours about then and guess what, they are the same neighbours to this day!

Childhood memories revolve around weekends and school holidays at Mackerel Beach. We used to explore the bushland, play aboard boats on the beach, climb on the rocks near the lagoon and hide out in the caves. Sailing to Portuguese Beach in a small sabot is indelibly etched - my mates and I thought we were Bligh and Flinders. Jumping off the back of the old Merinda was another highlight. Please kids - don’t try this, but we used to pretend to be going from Mackerel to Palm Beach and as the ferry pulled away from the wharf we’d run through and jump off the back.

Where did you got to school?

Eastwood Public prior to moving to the UK then Queensland in my teenage years. Regular trips back to Mackerel Beach were always a highlight during this time.

What did you do on leaving school?

Many and varied jobs - I’ve pretty much done it all. I guess the first ‘proper’ job was training as a technician with an office equipment company. That eventually became rather pedestrian …obviously. A keen angler since childhood and passionate writer and photographer, I started submitting articles and images to a fishing newspaper. I eventually branched out to other magazines and online, and this leads neatly into the next question.

How and why did you get into journalism?

A long story but English was the only subject I passed at high school - I had no interest in any others (and haven’t had to use algebra or the periodic table in daily life…).

While living at Hervey Bay on Queensland’s Fraser Coast I decided to would be nice to write not just for fishing magazines but a broader audience. I bombarded the Editor of the local newspaper with photos and stories and he eventually offered me work for a day a week. This became two, as it does, and before long I was on the photo desk full time.

Keeping it brief I was eventually graded as a photo journalist then went full time as senior reporter with another APN title, Mackay’s Daily Mercury.

After that I took a position as Editor of the Whitsunday Coast Guardian, a 110-year-old family owned weekly newspaper based in Proserpine, North Queensland.

Sadly that paper was sold to a multi-national last year and my ‘valuable service no longer required’.

But it’s worked out well as I’ve been able to return to my beloved Pittwater and take up new opportunities here. 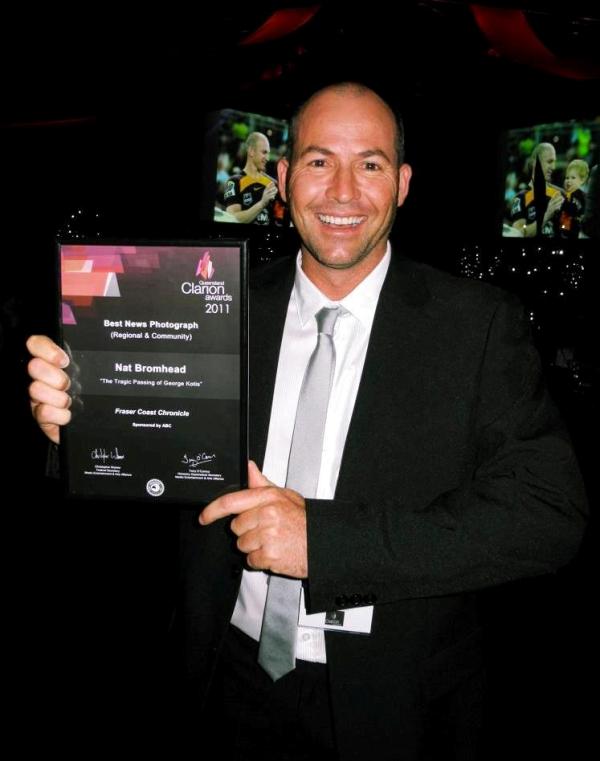 What awards have you won and for what?

In 2011 I won a Queensland Clarion Award (the state’s top media award from the Walkley Foundation) for Best Regional News Photo. This was for a series of images from a road crash that tragically killed a well-known local restauranteur. It happened on the same weekend of the grand opening of his least waterfront venue. On Friday night a journo and I covered the sold-out restaurant opening, on Saturday the sickening crash and on Sunday the wake. It was a terrible weekend.

In 2013 I was thrilled to win an award for ‘Best Newspaper up to 10,000’ at the Queensland Country Press Awards. The owner of the paper said the win was a highlight of the Whitsunday Coast Guardian's 110-year history. It was particularly rewarding given we were up against some big name, big budget titles.

There are a few other multimedia gongs but I’m most proud of these two.

When did your love of photography begin?

I guess it was via the Polaroid cameras and film my father used to give me as a kid. He worked at ABC TV and often had Polaroid land cameras at home - some of which we still have in the house at Mackerel. I then experimented with film and slide and eventually morphed into the digital world. I still have some classic film cameras and look forward to creating a series of Pittwater images with them soon.

Who are your favourite photographers and why?

Number 1 would have to be Frenchman Henri Cartier-Bresson. I have been fortunate to spend a fair amount of time in France. I love looking at his work in small galleries and museums, and also attempting to replicate some of his fantastic images.

I love the work of Annie Leibovitz and can’t think of anything better than having the time and resources to put together the elaborate backdrops she uses in her work. A truly inspirational modern master of the art.

Other than those two - about 100 others. I have countless photo books and love nothing more than relaxing, flicking through being inspired by the work of others.

You now are a freelancer - what are you doing there and why do this from home?

I run Pittwater Photography and perform digital media work from a home office at Mackerel Beach. A typical day involves far more writing and editing than photography but the cameras are always at the ready.

As a freelance writer, editor and Wordpress specialist my core duties revolve around updating websites, editing articles, design, layout and the like.

Well Mackerel Beach has got to be #1. After 45 years I still absolutely adore the place. A mad-keen cyclist, I love to take my bike up to West Head Rd and enjoy riding on the smooth road up there. I also really enjoy working via laptop from my favourite cafes in Avalon and Mona Vale.  Why? The laid back lifestyle and atmosphere of the northern beaches but convenience and close proximity to Australia’s biggest and most impressive city.

I don’t exactly have a motto but if I did it would be about positivity, making the most of every moment, taking chances and maximising opportunities. 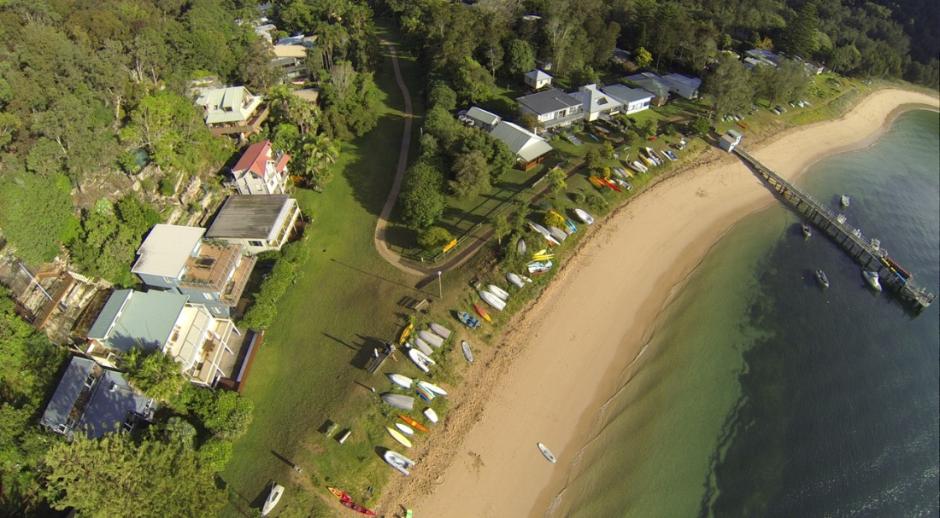