The Mermaids of Palm Beach

Beryl Driver, Viktorija MacDonnell and Elyse Cole are the Mermaids of Palm Beach, three feisty and energetic ladies who have a deep and lasting commitment to helping children through the Variety charity and are also up for adventure in entering the annual Variety ‘Bash’ and all that brings.

The Australian term, ‘Bashing’, possibly short for ‘bush-bashing’ was used in 1985 by businessman, adventurer and philanthropist, Dick Smith, when he invited a few mates on a drive to the outback. The drive was eventually called the Bourke to Burketown Bash and went from Sydney to Bourke, in far western NSW, and on to Burketown, in Northern QLD. The idea was to relive the fun and adventure of the Redex car trials of the 1950s, popularised by Gelignite Jack Murray, and to raise money for the Variety Club of NSW, a charity which provides goods and services for children with special needs.

Despite its informality there were rules and regulations for this first Bash. These stipulated that all participating vehicles had to have been built before June 1966 and have no performance modifications. In the days before mobile and satellite phones all vehicles had to carry a 40-channel UHF CB radio, be fitted with laminated windscreens and have tow bars fitted front and rear. Twenty litres of drinking or radiator water, 5 litres of oil, and numerous spare parts like fan belts, oil filters, spark plugs and fencing wire had to be on board. On the trip there were mobile workshops with welding kits crewed by mechanics, engineers and technicians who undertook roadside repairs to vehicles to get them to the nearest town.

Methods of fundraising during the Bash included issuing vehicles with fines for unauthorised modifications. There were also fines for going too fast or too slowly, cheating or not cheating, not enjoying yourself enough, taking the Bash too seriously by bribing officials and not giving refreshments to officials. Bonus points were awarded for vehicles with style, gimmicks, clever details and general outrageousness. Prizes awarded to winners of the Bash were of minimal value to make sure that as much money could be raised for the Variety Club as possible.

All Bashs go to and from places in Australia which start with the letter B. Last year’s 2012 event went from Balmain to Bamaga on the tip of Cape York in Queensland, a distance of 4202 km. The Palm Beach Mermaids were among the 120 cars and 400 odd participants who raised just under $2 million dollars for disadvantaged and disabled kids in NSW, a wonderful achievement.  The girls covered the 4,200 kilometres in 9 days and were at the finish for the photo at the tip of Cape York, an incredible logistic achievement for our Bash Co-ordinator Stewart Telfer.  Beryl once again raised over $25,000.00 with the help of all local supporters.

In previous years a Botany Bay to the Barrier Reef, Bourke to Beagle (in Darwin), and Bayside to Barossa have tested entrants as well as provided a lot of fun. Although the Variety Bash began in NSW, it’s now run in all states of Australia and has also spread to New Zealand, USA and South Africa.

This year the Mermaids will be participating once again and journeying from Bankstown to Ballarat in Victoria, a mere 4,425 kilometres. The ‘race’ commence on August 22nd, 2013.

The Mermaids will be holding one last fundraiser at the Palm Beach RSL; (Club Palm Beach) on July 22nd. There’s only a few tickets left for this, and as they are always one of the best events held at this venue, so we suggest you get in quick should you wish to be part of the evening.

This week we are privileged to present a few insights from Palm Beach Mermaids Beryl and Elyse, (Viktorija was away at time).  Elyse is in Teal, Beryl in Blue

How and why did the Mermaids of Palm Beach begin?

I had always wanted to do the Redex Trial but a young friend had done the Bash and said “you should do the Bash!!”.  I was 65 at the time!!!  However, my sons, Michael and Bruce, helped me get a car together and my friend Kit Moore and I just became the “Mermaids”.  We were the first female crew.

What is your aim?

To bring as much help and joy into the lives of any disabled or disadvantaged children as we can and the Children’s Charity, Variety is able to do just that, they raise funds to help in so many ways.

Please share three of the most challenging experiences of any of the Variety Bash's you have participated in?

Crossing the Tanami in 1999 as the First all girl crew.  This was my first Bash and was the most challenging. From Sydney to Broome across the Tanami Desert, nearly 7,000 klm.s on dirt road and not really knowing anything about Bashing.
The second most challenging was crossing the Snowy Mountains with lots of damage to the car, including a broken front end, no first gear, no hand brake and having to put chains on, this while dressed as Mermaids in the snow!!!
The road from Cooktown to Cape York was very challenging with very few places to stop along the way, plenty of spots with deep dust holes followed by extremely rough tracks, especially for a 50 year old car with no 4 wheel drive.
The Gibb River road, mostly at night to Mt. Barnett and running out of petrol in lots of places – on the road to Woomera in the pitch black with no traffic coming either way for the last two hours of driving.

Please share three of the funniest experiences you've had

Obviously  No#1 is possibly the best ever ‘Mug of the Bash’ award; we managed to get our car into the line up for lunch time at Glen Rowan in Victoria. However, on closer inspection we were lined up for the Victorian Bash !!!!!!

One of our funniest times was in a very small outback town, our lovely crew member, Ineke, got out of the bed and said “I’m going to get us cappuccino’s for breakfast”, this was a town we thought wouldn’t have heard of cappuccino, however, she arrived back 1/2 an hour later with 3 piping hot frothy caps and hot buns.  We couldn’t stop laughing, only Ineke, ‘Pollyanna’ could do that.
Another Pollyanna moment was in Borroloola, in the Gulf Country, we had no accommodation and would be sleeping in the car but while we were getting petrol, Ineke once again said “I’ll go and see if they have a room at the hotel (the only accommodation in town and 400 of us there with the Bash for one night) Unbelievably, she came back with three beds in the soon to be refrigerator with fresh sheets, towels and hot water for the princely sum of $10!!!!

When we broke our axle near Musgrave Station on the last Bash, our roadside mechanic said we’d have to get towed to the nearest town (hundreds of K’s.) to get another axle. We said “we’ve carried one for 14 years.” He said, “which one, right or left?”
We couldn’t believe there were two sorts, and much laughter and labour later, we had the correct one, very happy.

Where did the car come from originally?

This is the second “Mermaid” car 2108. This one came from Hughendon in North Queensland. The car came through yet another Bash generosity story. I had been told by my son, Michael, that my car had outlived its Bash life and that I was just going to have to give up Bashing.  That “final” bash, on our trip north, we passed through the town of Hughenden and one of our great Basher’s, Gordon Douglas, saw an old couple in a service station with a 1964 Holden in very good nick, they were buying petrol, he asked if they were interested in selling and they said “No!  That they loved the car, however, they had another like it at home” on checking the car out, he bought it and that night handed me the keys and said “Happy Bashing Beryl”, such an incredible act  has allowed me to, this year, complete my 15th Bash.

How many Bash's have you all been on now?

What is coming up ?

Our last big night will be at the Palm Beach RSL on the 22nd of July; dinner, entertainers, raffles etc. all our fundraising has been completed for this year.

On the 22nd of August we leave Bankstown via Mandildra, Nyngan, then Wanaaring to Tibooburra, Cameron Corner to Innamincka SA, Innamincka to Cordillo Downs to Birdsville Qld, Birdsville to Mungerannie to Leigh Creek SA , Leigh Creek to Curnamona Station to Peterborough , Peterborough to Morgan to Mildura, Mildura to Pinnaroo to Horsham and then Horsham to Ballarat, finishing on the 30th of August.

What is the Mermaids of Palm Beach favourite place/s in Pittwater and why?

My favourite place in Pittwater is Currawong as I have been going there for nearly 50 years, taking my own children and grandchildren and may friends regularly.

The wharf at Palm Beach and Currawong; an incredible spot that has now been saved for us all to enjoy, particularly when it’s our Golf Fundraiser with the ladies of Palm Beach Golf Club, but anywhere on the water as this is where we choose to live and we try to make the most of the wonderful outdoors we are lucky enough to have so close to our homes.

What is the Mermaids 'motto for life' or a favourite phrase you try to live by?

Beryl: Live Each Day to the fullest

Elyse: Have you got champagne to go with that??? 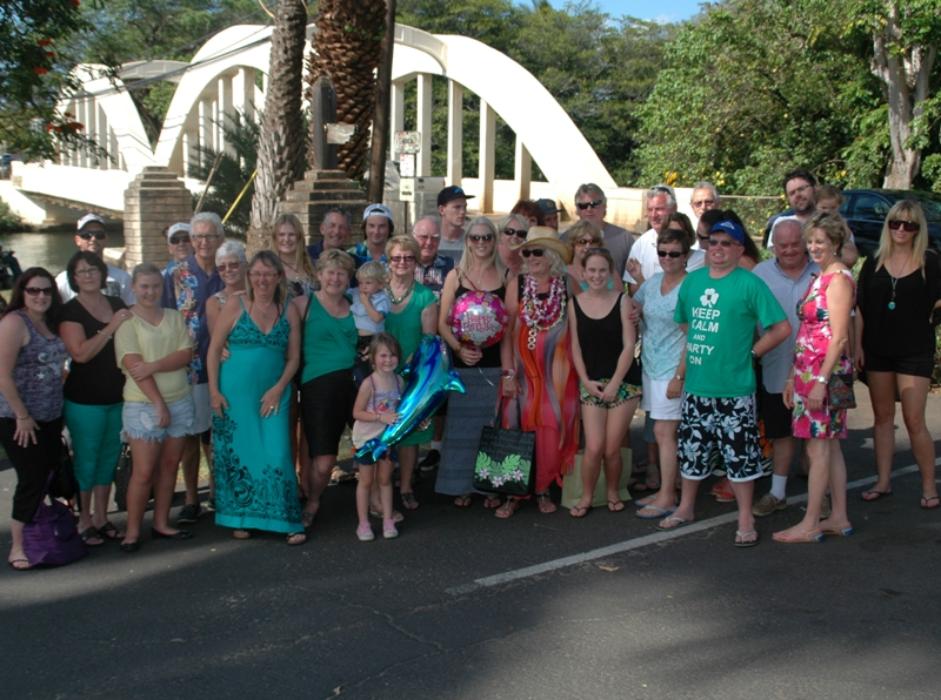 A last note from Elyse: To date Beryl has raised nearly $500,000.00 for Variety with the help of all those local supporters who love her enthusiasm for life. On the 17th May, 40 of us celebrated her 80th at Haleiwa Joe’s restaurant in Waiamea Bay Hawaii!!!!!. 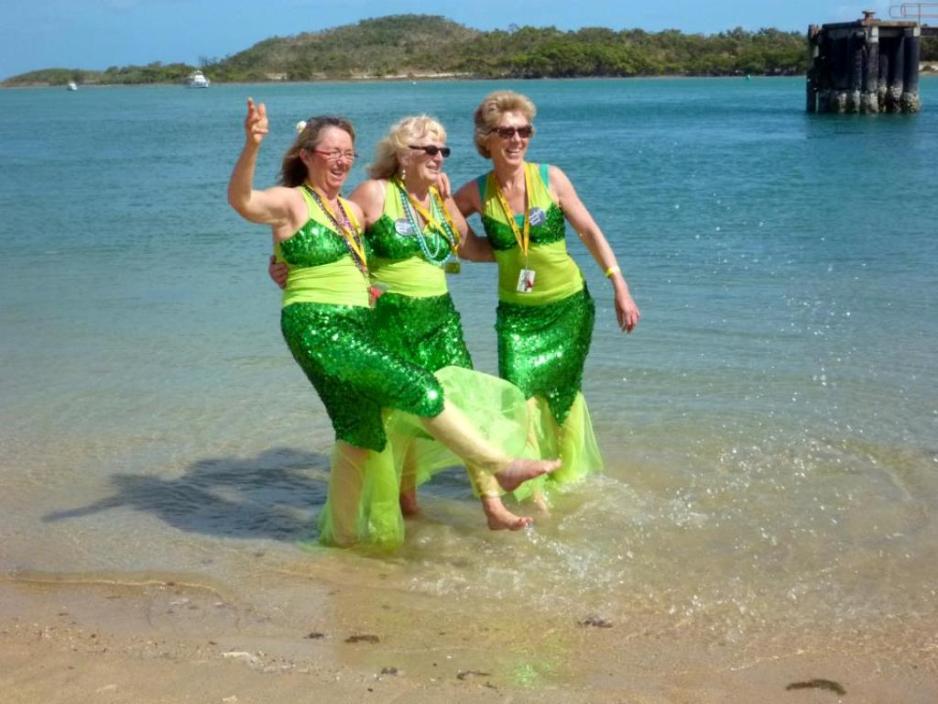 Mermaids in water!!: we are at Bamaga about to catch the ferry to Thursday Island, photo by Esa Thomas.