"Like kangaroos and gum trees, parrots are part of what defines Australia. "

A few weeks ago we received a beautiful new book compiled by ornithologist Penny Olsen. With a Publication Date of 14 October 2013, and with the great array of parrots we have residing in Pittwater, this seems a great way to celebrate National Bird Week  (19-25 October 2013),

Have perceptions of parrots changed over time (since the arrival of the First Fleet for example)? Are any Australian parrots extinct or endangered? Late sixteenth-century maps showed how early explorers told of a great land to the south where large flocks of parrots occurred and inspired the name "Psittacorum regio" meaning "The Land of Parrots".

In this stunning book Flocks of Colour, published by the National Library of Australia, Penny Olsen shares with us her love of an iconic Australian bird –the parrot. The book contains beautiful reproductions of illustrations of parrots, including many of the first ever painted, from the library's collection.

Not many Australians would realise that the National Library of Australia in Canberra has such a comprehensive collection of ornithological material, including many rarities. Award-winning natural history writer Penny Olsen always enjoys viewing original artworks, rare books and journals.

"I did not expect to find anything new, so I was surprised and delighted to come upon three 1860s hand-coloured prints of parrots—the Sulphur-crested Cockatoo, Australian King-Parrot and Crimson Rosella—by French water-colourist and lithographer Edouard Travies, one of the best artists of his generation," says Penny Olsen.

From an illustration of a Rainbow Lorikeet collected live on Cook's 1770 Voyage –to Cooper's twentieth-century watercolour of the elusive Night Parrot, this book features all 56 species of the parrot family and places them in historical context.

With illustrations from more than 35 artists, Australian parrots are the most diverse assortment of species of any country. They are often distinctive in behaviour or colour, or both. "Arguably, parrots are Australia's best-loved and most familiar birds," says Penny Olsen.

With introductory essays by ornithologist Penny Olsen, Flocks of Colour covers two and a quarter centuries of discovery and illustration of Australia's avifauna. It features a rich portfolio of images of all the Australian parrots, by various artists including John Gould, Edward Lear, Neville W Cayley and William T Cooper, selected from the collections of the National Library of Australia. The foreword is by Joseph Forshaw, a world expert on the parrot family.

We took the opportunity to ask Penny a few questions about Flocks of Colour this week:

Who is, in your opinion, the most important ornithologist in this new book and why are they? 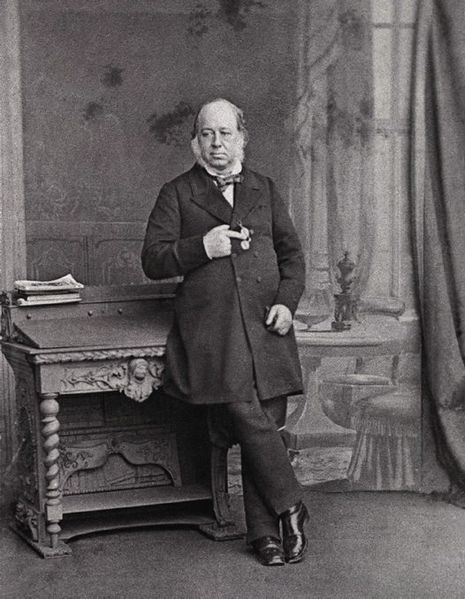 I would have to say that John Gould was the most important ornithologist in the book: he is often referred to as the father of Australian ornithology. He made the first descriptions of a great many of our birds and gave them a scientific (Latin) name. He was a superb ornithologist and many of his names stand today. Of course, he also produced those magnificent illustrated volumes, The Birds of Australia, detailing all that was known at the time—an awesome achievement.

Picture at right of John Gould, 1860, by unknown photographer.

Flocks of Colour encompasses the shift from skippers such as de Vlamingh noting the presence of parrots in Australia through to when naturalists were begun to be included on voyages here. How important was including naturalists to be for future generations?

Australia was colonised during the period when the superpowers of the time were sending out ships in search of lands, resources and trade. Part of this trade was the birds and other creatures of the world, which were sought after by scientists, gentlemen naturalists and newly established museums. Some too were potentially useful for domestication as pets or for food.

Naturalists collected and recorded what they could at each landfall. Often an artist was among the naturalists and this was especially important in the era before an effective means of specimen preservation had been discovered. Curiously, no naturalists or natural history artists were sent on the First Fleet.

Nevertheless some of the officers realised the value of recording the natural history of the new colony of New South Wales, and used their training and equipment as naval draughtsmen to paint the animals and plants, or employed convicts with some artistic talent, such as forgers, to do so. These first records tell us something about what Australia was like at the time.

Flocks of Colour celebrates as well as charts the development of illustrating birds as well as the way their names were spelt and are now spelt - how important is a knowledge of the change in spelling when identifying what bird may be referred to?

The subject of bird names is a minefield. Various names, both scientific and vernacular, have been used over the years and illustrate how important it is to have standardised names and a system for achieving that. How else do we know which bird we are talking about? The Linnean system of classifying and naming living things scientifically work well, though taxonomists still argue about where certain taxa belong, are they full species or subspecies, which birds are their allies. Common names are cause for even more argument—there are regional differences in names (both within Australia and internationally), they may change over time and people are wedded to their favourites. So, most of us stick to one of the accepted lists.

On page 198 - The Night Parrot - beautiful illustrations of the only true nocturnal parrot - and not seen for a while?

Flocks of Colour celebrates our parrots but also charts insights into the environmental shifts of these birds and their habitats – for example the movement of galahs from inland areas to coastal regions due to land clearing. Which parrot has been most impacted by Europeans settling in Australia?

Various parrots have been impacted differently: some have benefited and spread or multiplied in numbers. These include the galah, as you mentioned, and some of the corellas, which have benefited from changes associated with agriculture (water, crops, more suitable habitat). Other parrots have suffered through loss of their habitat to agriculture, development, overgrazing and so forth; these include the extinct Paradise Parrot from the Darling Downs region. At the moment, of the parrots in book, the Orange-belled Parrot, numbering about 40 birds, is probably the parrot nearest to extinction in the wild. Coxen’s Fig-Parrot, the Tasman Parrot and the Western Ground Parrot, arguably subspecies, are not faring much better.

Flocks of Colour is a stunning visual collection of some of the National Library of Australia's vast collection of Australian Parrot illustrations - how did you choose which ones to include and which are your favourites?

One of the purposes of book is to showcase the collections of the National Library of Australia, which has an amazing collection of colonial-era paintings and old monographs with hand-coloured illustrations to choose from. I wanted to include every resident Australian parrot, including those on Australian territories such as Christmas and Macquarie Island; 56 in all. For each species, I particularly tried to get the first illustration and a couple of more modern interpretations. Apart from historical significance, I sometimes chose for beauty, sometimes accuracy, sometimes quirkiness—anything that appealed! My favourites change from day to day.

Penny Olsen is an ornithologist, researcher and writer with a passion for natural history. She is Associate Professor in the Research School of Biology at The Australian National University. She has written more than 20 books including Glimpses of Paradise: The Quest for the Beautiful Parrakeet (2007), A Brush with Birds: Bird Art in the National Library of Australia (2008), Upside Down World: Early European Impressions of Australia's Curious Animals (2010) and Cayley & Son: The Life and Art of Neville Henry Cayley & Neville William Cayley (2013). 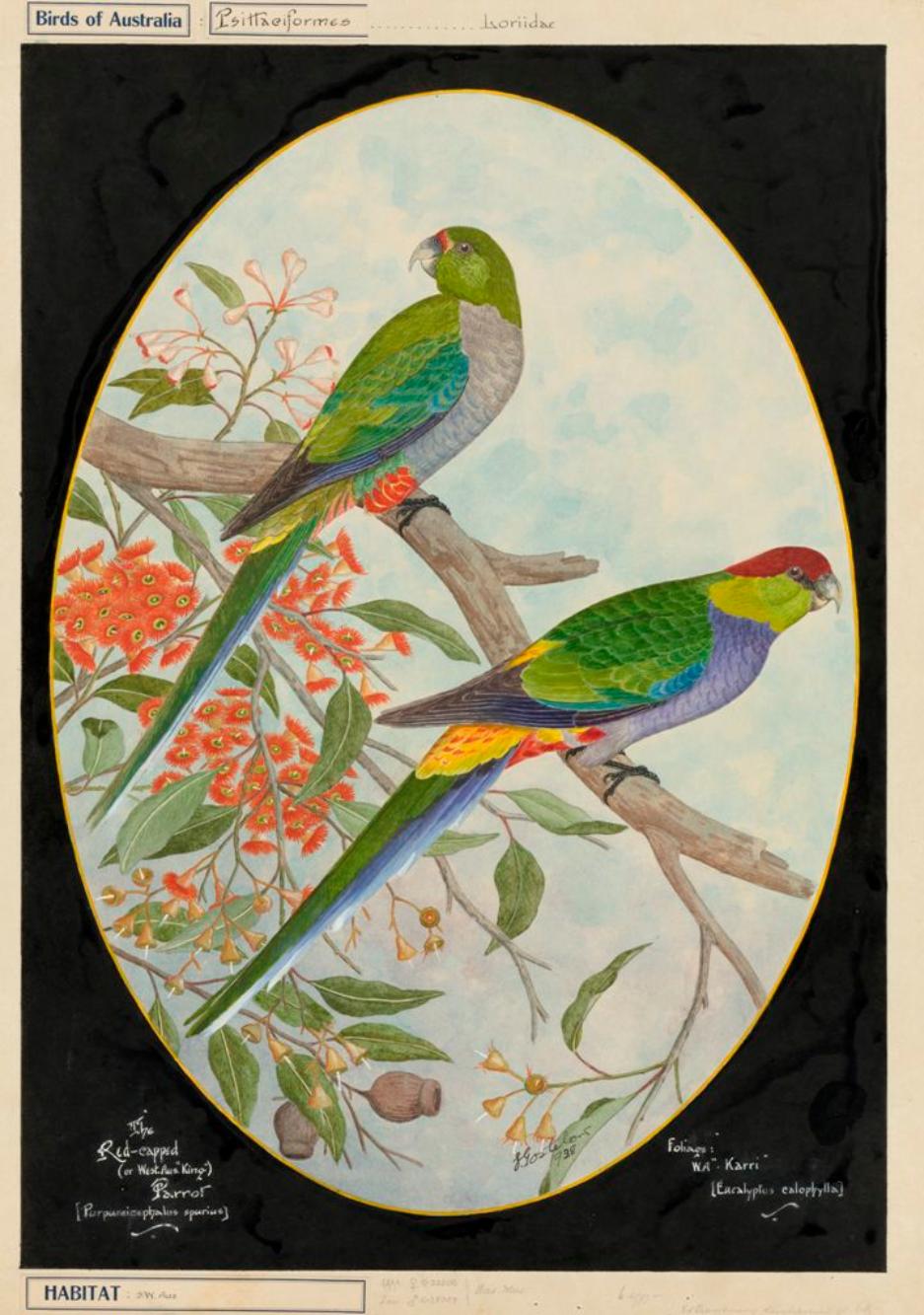 One of the glorious illustrations from this new work by Dr. Penny Olsen - The  Red-capped (or West Australian 'King') Parrot, Purpureicephalus spurius, 1938 by Ebenezer Edward Gostelow - female is at top and male bottom.