This week we again saw the flock of white Australian ibises that have been frequenting the creeks and foreshores of the northern end of Pittwater for well over a few years now and they inspired us to share some insights and a story for children of old.

Less then a hundred years, like the carrion eating and cleaning the land eagles, our ibises were destroyed by rural graziers who saw their flocks descending on crops as harmful to themselves. Further education was needed and insights into all the benefits of keeping our native local birds around had to be spoken of. Many of our birds keep down insects and when these reach plague proportions, as they can in the case of locusts, if you have scared off all the locust eating birds, you are going to be in trouble. It's good to look at how people once thought and how learning more helps all to think again and become a little smarter about choosing what kind of world they want to live in. It's greayt when we realise we've made a mistake about something and change things to reflect our new knowledge.

We also include a small mention from a gentleman, Neville W Cayley,  who once lived in Pittwater, in Marine Parade at Avalon, so you realise we have a rich heritage here of loving and looking after birds that goes back as far as birds have been studied in this country.

Please remember when reading anything in Pitwtater Online News that if we use a dark blue colour for the words it means the words are from the breath of someone else; blue = breath in Pittwater Online News, the air with which we shape letters into words to express thoughts. Using this colour also is a clear indication of who said what and when they did. It is very important to always give credit where credit is due and not attribute the works of others to yourself, especially since the point of listening to anyone is not only to hear what they say but how they say it so you also get to visit, for a while, with their self. Long live the celebration of our daily expressions of our individual and original songs is the motto here!

The Australian White Ibis (Threskiornis moluccus), is a wading bird of the ibis family Threskiornithidae. It is widespread across much of Australia and has a predominantly white plumage with a bare, black head, long down-curved bill and black legs. Historically they were rare in urban areas, but have immigrated to urban areas of the east coast in increasing numbers since the late 1970s; it is now commonly seen in Wollongong, Sydney, the Gold Coast, Brisbane and Townsville.  Its sister species is the Sacred Ibis.  It was known as Mardungurra among the Yindjibarndi people of the central and western Pilbara.

Breeding season varies with the location within Australia, generally August to November in the south, and February to May, after the Wet Season, in the north. The nest is a shallow dish-shaped platform of sticks, grasses or reeds, located in trees and generally near a body of water such as river, swamp or lake. Ibis commonly nest near other waterbirds such as egrets, herons, spoonbills or cormorants. Two to three dull white eggs are laid measuring 65 mm × 44 mm. The clutch is then incubated for 21–23 days. Hatchlings are altricial, that is, they are naked and helpless at birth, and take 48 days to fledge. The Australian White Ibis is a fairly large ibis species, around 65–75 cm (25–30 in) long and has a bald black head and neck and a long black downcurved beak, measuring over 16.7 cm (6.6 in) in the male, and under in the female. The slightly heavier male weighs 1.7–2.5 kg (3.7-5.5 lb) compared to the 1.4–1.9 kg (3.1–4.2 lb) female.

In culture
The African Sacred Ibis was an object of religious veneration in ancient Egypt, particularly associated with the deity Djehuty or otherwise commonly referred to in Greek as Thoth. He is responsible for writing, mathematics, measurement and time as well as the moon and magic. In artworks of the Late Period of Ancient Egypt, Thoth is popularly depicted as an ibis-headed man while consumed in the act of writing. According to local legend in the Birecik area(a town and district of Şanlıurfa Province of Turkey, on the River Euphrates), the Northern Bald Ibis was one of the first birds that Noah released from the Ark as a symbol of fertility

THE IBIS. Graziers' Best Friend.MOREE, Monday.
During a lecture on birds, delivered In the School of Arts, Mr. Cayley, secretary of the New South Wales Royal Australian Ornithological Union, said the Ibis was worshipped by Egyptians, and should be worshipped in Australia. It was one of the means by which liver fluke in sheep could be kept down. The bird ate freshwater snails, which were the host of the liver fluke. He urged graziers to do their utmost to protect the ibis, which, he said, was one of their best friends. Australian birds, Mr. Cayley proceeded, were, perhaps, the most interesting In the whole world, and it was a pity that Australians did not realise the fact. THE IBIS. (1933, October 31). The Sydney Morning Herald(NSW : 1842 - 1954), p. 11. Retrieved from http://nla.gov.au/nla.news-article17020242

The Ibis Tells His Story Another 'Bird Letter'

MY Dear Boys and Girls.—I know that you were all delighted with the story of the halcyon, which my friend the kingfisher described so well, but as you would guess, it was simply a beautiful fable woven together by the clever men of old. My family history reads like a fairytale, but I wish you to know that it is quite true, handed down to us throughout countless generations, and we are proud to know that we belong to such an ancient family. In that wonderful land, which I have heard you call Egypt, there flows- a noble river called the Nile. Ages ago the people of the land worshipped this river, because they saw that every year its water became swollen and spread out over the land and enabled them to plant the crops which formed their chief food. You can imagine how anxious they were that this should, happen, because they knew that if it failed them thousands would die of starvation As the season approached, the people eagerly scanned the river for the first sign of the approach of the water. And what do you think this was? Not the water itself, as you might imagine, but a countless flock of ibises. Year by year these birds heralded the approach of  the flooding waters,: and you can well understand that they were looked upon as holy birds. But there was a further cause of rejoicing. These people knew that the birds would do valuable service by destroying the locusts, grasshoppers, and other pests so destructive to their crops. Thus they became the sacred bird of Egypt, and no man dare lift a finger against them for fear of punishment.  Thousands of years have passed and the sacred ibis is seen no longer on this great river;, but, my friends, we to-day, as members of this –ancient family, are carrying on their great work.
My object in telling you this story of the past is to impress upon you the value of our services to your vast country as protectors of your crops. The locusts, crickets, and caterpillars are just as plentiful here as they were to Egypt of old, and must be kept down! We are willing to help you, if you will allow us to do so. Where ever  we go we do good. We have tremendous appetites and can clear whole areas of these pests. But we must be looked upon as sacred by all and we must be free to come and go without danger to ourselves and young ones.

Now, my boys and girls, so far I have said little about myself, because I feel that it is my duty to warn those people who wilfully destroy us that they are not true lovers of their country’s welfare. 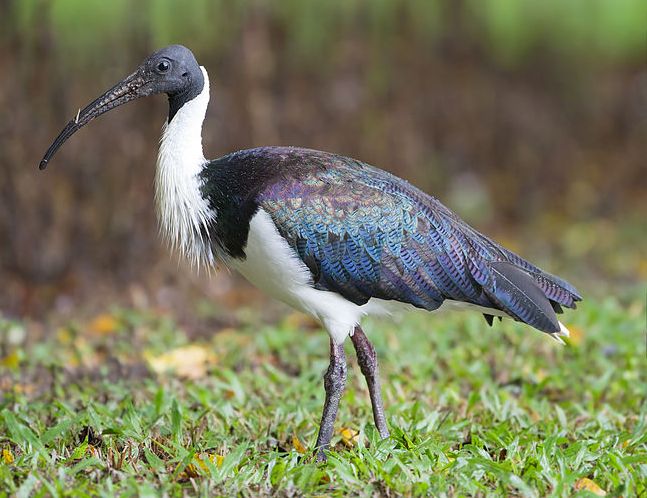 There are three kinds' of ibises in your land, and my white cousin in the south is very similar to the sacred ibis of old. I am called the straw necked, and you young people know me very well. I have a black arched bill, and the centre of my foreneck is white with long straw coloured plume's on each side. I am glossy, bluish black above, and my wings are of a purplish colour and the whole of the upper parts are barred across with black. The lower part of my back is also black. The upper parts of my body are white, and the crown of my head and forepart of the throat are bare. My mate is slightly less than I am. My white cousin does not leave its swampy home, but you will see me in all parts of the country, and where I roam you may be sure that I am busy among the pests.

I am called the 'farmers' friend, and no better name could be given to me. Do you know, my friends, that some of your wise men say that I can eat upwards of 2000 caterpillars daily? Can you imagine if this is true, and I quite believe it is judging from my appetite— anyone trying to do me harm? Really. They must be short of common sense to think of such a thing! I wonder how many of you have seen my nest? Probably very few. In many parts of your country there are great swamps, and if you could visit one of these you would probably see our home. Put what a sight you would behold. Instead of one nest you would see thousands, for we are very sociable birds, and like to live together. I have been told by one of my friends who has travelled that there were as many as 300,000 on a swamp that he had visited. Of course, we do not make a very elaborate nest. My wife simply treads down the green twigs and rushes until they lie almost flat, and then she lays her eggs. There are generally three of them, and they are white in colour. Here we remain until our young flock is reared, and then we fly away to fresh pastures in search of food. I have come to the end of my story, and I sincerely hope that what I have said will bear good fruit. I am quite aware that we are different from the happy songsters about you, but we have our part, to play in Birdie Land, and we try to do it to the best of our ability. Do not hamper our work, but rather encourage us to come amongst you. Remember, we check the march of the insects that are gradually overwhelming this beautiful country- Good-bye.
For Boys and Girls. (1935, November 3). Sunday Mail(Brisbane) (Qld. : 1926 - 1954), p. 30. Retrieved from http://nla.gov.au/nla.news-article97859316

The Straw-necked Ibis (Threskiornis spinicollis) is a bird of the ibis and spoonbill family Threskiornithidae. It can be found throughout Australia, New Guinea, and parts of Indonesia. Adults have distinctive straw-like feathers on their neck.
Straw-necked Ibis (Threskiornis spinicollis), Centenary Lakes, Cairns, Queensland, Australia by JJ Harrison, June 2011.
Australian White Ibis. (2013, April 10). In Wikipedia, The Free Encyclopedia. Retrieved from http://en.wikipedia.org/w/index.php?title=Australian_White_Ibis&oldid=549758063 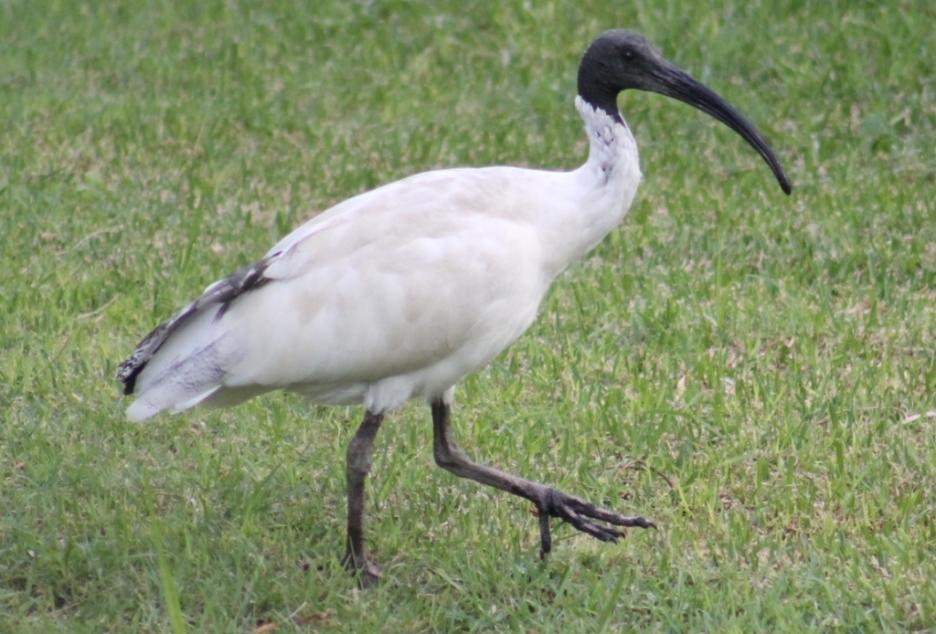 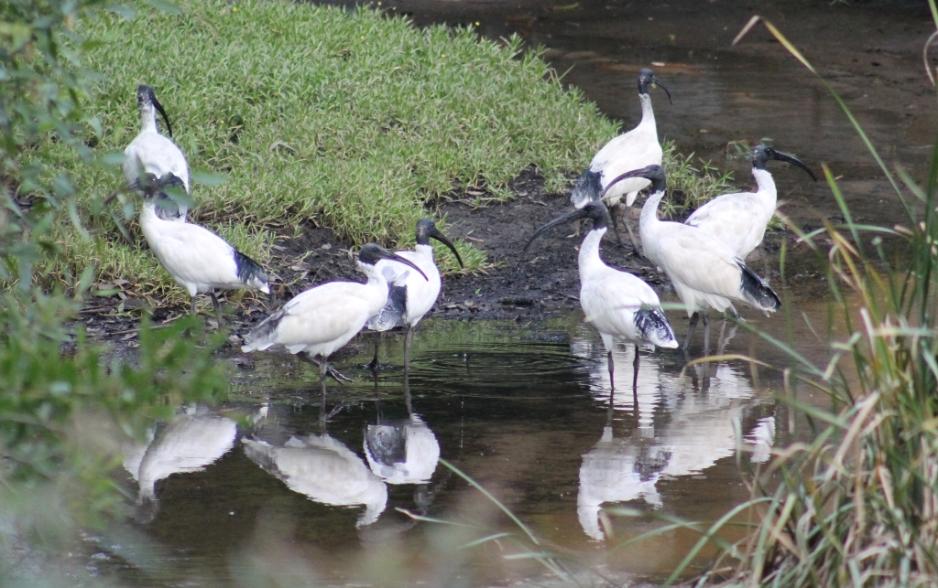 Australian Ibis photos by A J Guesdon, May 2013. 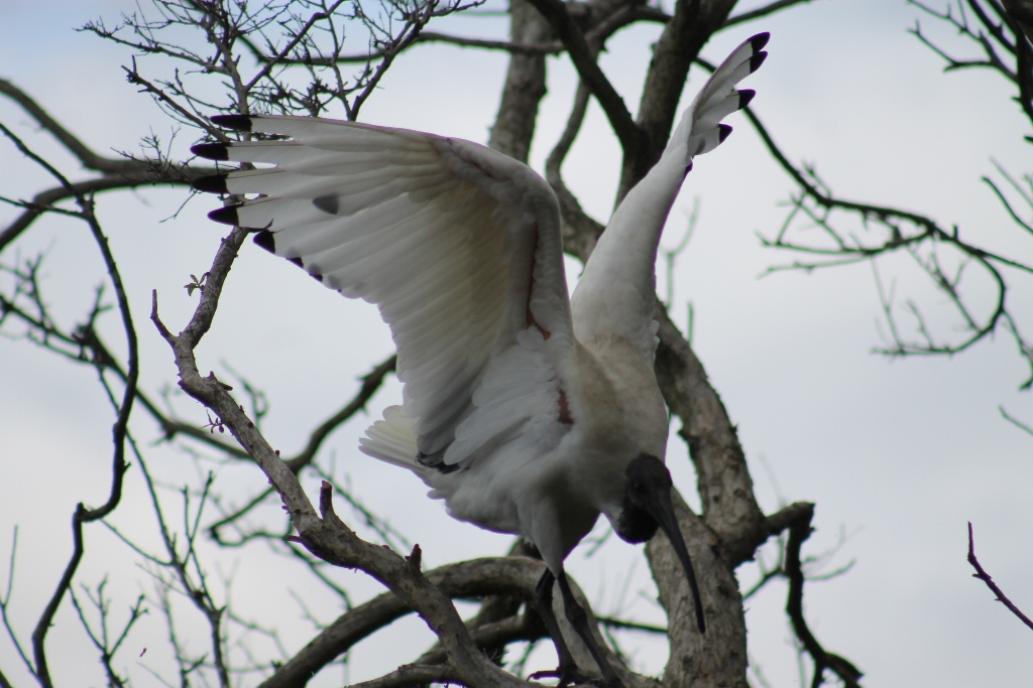