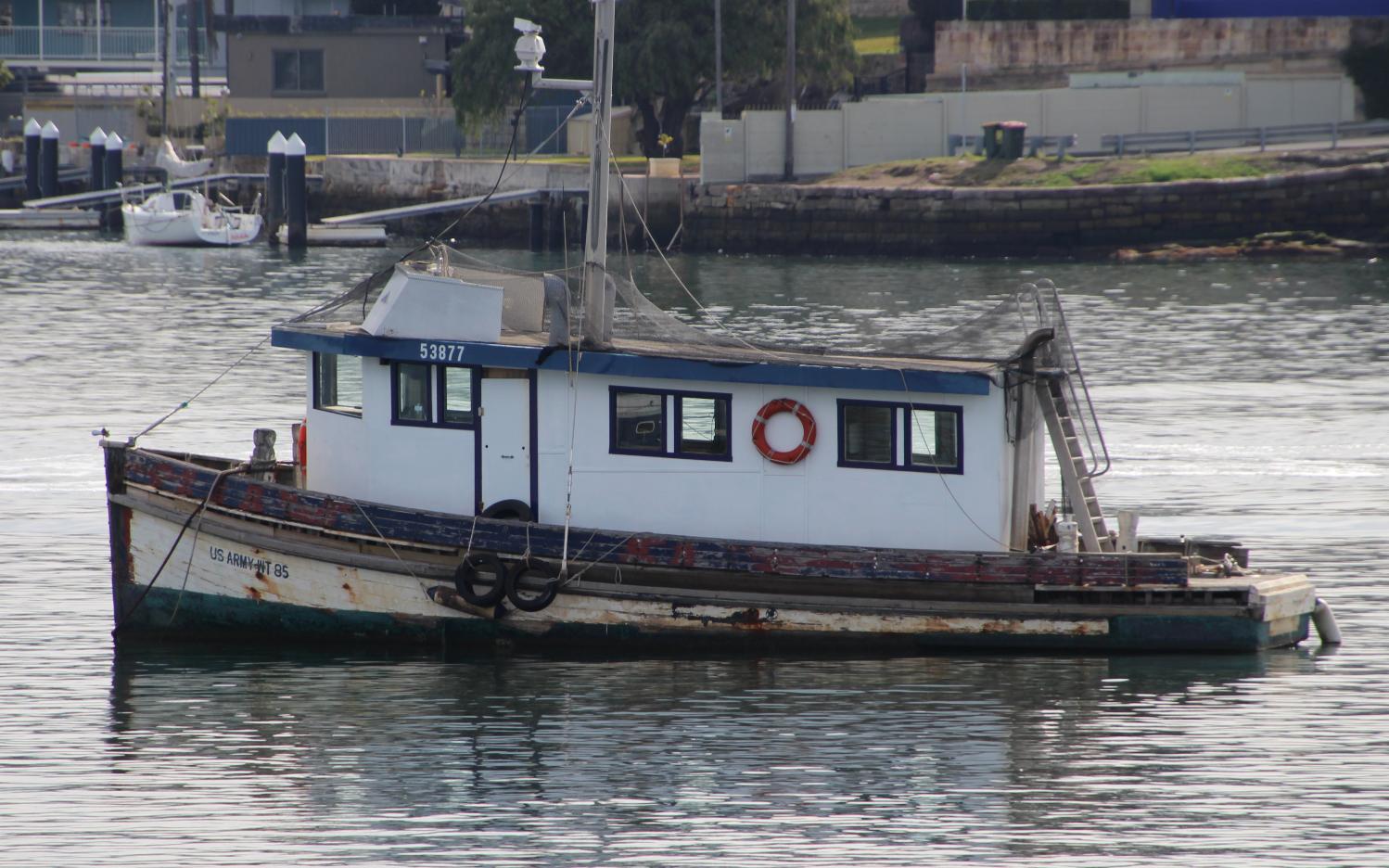 An old vessel sitting on a mooring in Pittwater has prompted interest as its rustic appearance and name on the bow suggest a story.

The name US Army WT85 prompts those who might know that it’s a possible original wartime vessel and was part of the US Army Small Ships Fleet in WW2. And in thinking that, they’re right. WT85 is one of very few existing small ships that played a strategic role in defence of Australia’s northern wartime boundaries and its owner, a member of the NSW-based US Army Small Ships Association, is intent on restoring her.

There are those, including myself, who believe that the US Army Small Ships Fleet was for many years not widely known or appreciated for the important role it played throughout the near coastal regions of Australia’s northeast and when you look at recent history you can probably see why. The fleet and those who manned the ships, all fell between the cracks when it came time for recognition of their role in the war effort. It was all a matter of the government of Australia finding how to go about acknowledging a war effort where largely Australian civilian crews worked ships that were part of a US Army fleet.

But the role they played is now acknowledged as a critical one that led to allied successes in the islands to Australia’s north. And in their frontline role of secretive missions often in the ‘fog of war’ they paid the price and were victims of friendly fire.

Understanding how WT85 came to serve in its wartime capacity we have to go to the very beginnings to find out why there was a small ship fleet that was brought together by the US Army.

In the 1930’s two American adventurers set sail from America into the Pacific on a self-funded mission of exploration. Brothers, Sheridan & Bruce Fahnestock made good use of knowledge gained during their voyage to the southwest Pacific and later reported that if there was ever a conflict in the area (tensions between the US and Japan were increasing at the time) that a fleet of small vessels would be an essential part of any war machine given the logistics of location and navigation – small ships that without the appearance or profile of a warship could have a tactical advantage and ‘slip under the radar’ to carry out their missions.

After the commencement of war in the Pacific, the brothers, now commissioned in the US Army flew to Australia to set up the US Army Small Ships Command. Then came the task of procuring the vessels that would be suitable for strategic service in delivering agents, ammunition, medical supplies, other essentials to outlying bases that could not be reached by deep draft ships and in assisting in tactical missions.

History notes that, ‘war shortages meant that ships were procured from wherever they could be gotten in Australia creating a fleet like none seen before’. It was a fleet consisting of fishing trawlers, schooners, ketches, luggers, tug-boats, yachts and ferries some of which were constructed in the previous century. If there was ever a raggle taggle fleet, this was it. (The book to read is Ladislaw Reday’s, The Raggle Taggle Fleet. How the book came to be written by a member of the ‘raggle taggle fleet’ is another story for another day).

Australian war effort was directed at strengthening the combat preparedness of the Australian Services so the crewing of the US Army Small Ships Fleet became a civilian affair which ultimately retained over 3000 Australians and many from other nations who worked alongside US Army personnel. And so the push was on to the contested areas of Milne Bay, New Guinea and islands in preparedness for the defence of northern Australia.

Part of ‘the raggle taggle fleet’ is WT85 (WT for Wooden Towboat) and we are fortunate in having this living piece of history sitting now in Pittwater as she awaits restoration. 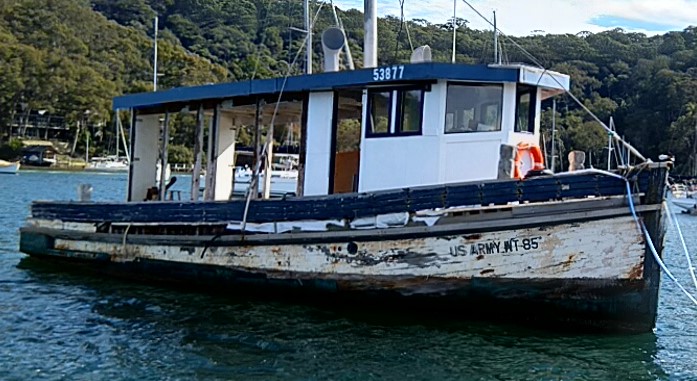 WT85 is a 13m wooden vessel built at Tuncurry NSW in 1943 under the direction of US Army Small Ships and later in the war following allied successes when the threat to Australia’s north had improved, she was handed over to the Royal Australian Navy. WT85 was first advertised for sale in 1948 and commenced service with successive ferry operators. Since then her time on the water has taken her through various ownerships until arriving at her present mooring in Pittwater.

The NSW-based US Army Small Ships Association since its inception in 2003 has done a remarkable job in drawing attention to the ‘forgotten fleet’ of small ships and the role they played in the defence of Australia’s northern boundaries. It’s a credit to those who devote their time to the history and the Association’s activities particularly when there’s a challenge afoot for the Association itself to restore another of the few surviving ships of the forgotten fleet.

The Association has been offered a vessel that has a chequered wartime history but is more than a challenge and a half to accept unless it can raise the funds to do the work.

MV Shangri La, a 17m motor cruiser was built in 1938 in Sydney and at the outbreak of war was engaged in guarding the storage of explosives at Bantry Bay, Middle Harbour. The ship arrived in Port Moresby on October 6, 1942. Of its operating history one report says she arrived in the Philippines after the landings at Leyte, carrying General MacArthur’s personal staff. She later returned to Australia in operating condition as deck cargo during 1946.

After the war MV Shangri La played a prominent role in the development of tourism in Queensland and spent two years cruising from Mackay to the Barrier Reef. The Lindeman Island Company bought her next and she became the main supply and passenger vessel between Mackay and Lindeman Island for 17 years. For the past 15 years she has been out of the water awaiting TLC and a new role to commemorate her historic background.

The future of this classic ship which is now an Australian Registered Historic Vessel will depend on how the Association might get funds for its restoration and future use in a range of practical and community uses in Australian ports. Anyone interested should contact US Army Small Ships via its web address …www.usarmysmallships.asn.au -  secretary@usarmysmallships.asn.au 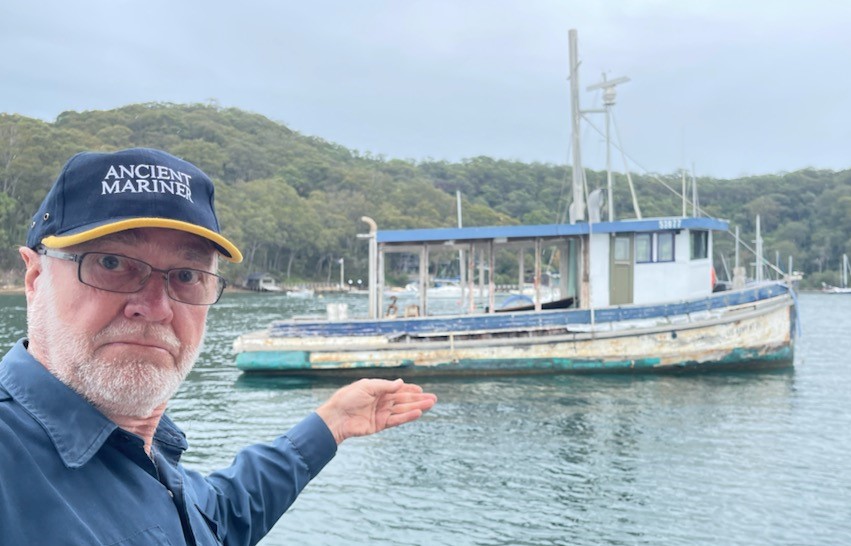