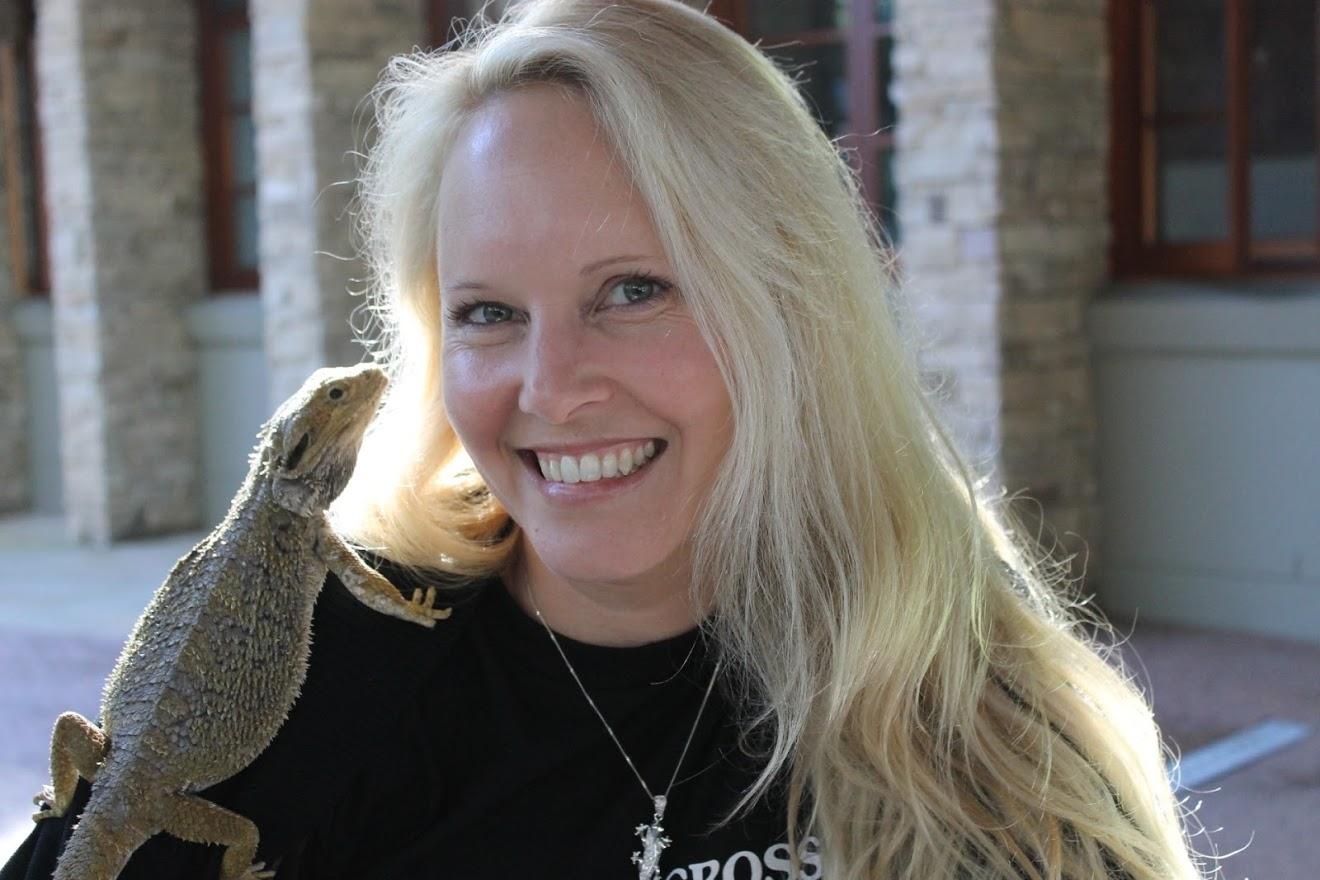 Lynleigh with Harley the dragon in 2013, who is now a very old boy. A J Guesdon photo

The 2022 Queen's Birthday Honours list recognises 992 Australians, including 669 in the General Division of the Order of Australia, and awards for meritorious, distinguished and conspicuous service.

"On behalf of all Australians, I congratulate the Australians recognised in today’s Honours List," the Governor-General said

“Recipients share some common traits – including selflessness, excellence and a commitment to service. They’re from different backgrounds, their stories are each unique, and each has served in different ways. This diversity is a strength and each has impacted their community and made it better.

“For that, we thank them and, today, we celebrate them.

“Collectively the recipients, whose achievements span community service, science and research, industry, sport, the arts and more, represent the very best of Australia.”

“The Order of Australia belongs to all Australians. In addition to the characteristics of selflessness, excellence and service, each recipient in the Order has something else in common: someone has taken the time to nominate them for recognition.”

“Please consider nominating someone outstanding from your community for recognition. The Order belongs to each of us and we all have a part to play. The only way a person can be recognised through the Order of Australia is for someone to nominate them.”

Residents and those with connections to our area recognised in the 2022 Queen's Birthday Honours list include:

MEMBER (AM) IN THE GENERAL DIVISION OF THE ORDER OF AUSTRALIA
Dr Deidre Karen ANDERSON
For significant service to tertiary education, and to sports administration.

Board and volunteer roles - other

MEMBER (AM) IN THE GENERAL DIVISION OF THE ORDER OF AUSTRALIA
Mr Barry Martin LAMBERT, Collaroy
For significant service to cannabinoid medical research, to business, and to charitable organisations.

The Lambert Initiative is the outcome of an unprecedented pledge of $33.7 million by Barry and Joy Lambert to the University of Sydney in order to fund long-term research into the medicinal potential of the cannabis plant.  A world first in the extent of support for medicinal cannabis research, this remarkable gift places Australia at the forefront of medicinal cannabinoid research.

As a result of the experiences of their granddaughter Katelyn who suffers from debilitating paediatric epilepsy, the Lambert’s goal was to fund the establishment of research into the possibility of cannabinoid treatments, not only for epilepsy, but for a broad range of chronic illnesses.

The donation is also the largest ever made to research at the University of Sydney.

The Lamberts’ gift holds the promise of achieving innovative and effective new medicines to alleviate the suffering of countless numbers of people by enabling research across a broad range of applications, from addiction, cancer, obesity, childhood epilepsy and chronic pain to dementia and mental health disorders.

The Lambert’s donation funds a multi-year program (2015 - 2024) to build on the University’s extensive clinical and scientific cannabinoid-related expertise to ultimately produce cannabinoid-based medicines that are safe, reliable and affordable.

MEMBER (AM) IN THE GENERAL DIVISION OF THE ORDER OF AUSTRALIA
Mr John McCONAGHY, Avalon Beach
For significant service to the yacht manufacturing sector.

John McConaghy, was a boy who sailed out of Seaforth Sailing Club in the 1950s who went on to become a “World-wide Legend of Boat Building.”  McConaghy boats was founded by John McConaghy in 1967, building 12, 16, and 18 foot skiffs, Tornado and A-class catamarans, moths and other high performance dinghies. Early boats were built of plywood, quickly after McConaghy began engineering and perfecting the vacuum formed foam sandwich, fibreglass / Kevlar construction method, which proved an immediate success.

As the company’s reputation grew, so did McConaghy's research and development into pre-preg composite techniques earning them a reputation as the best in the business and making the McConaghy name synonymous with light, strong and stiff laminated structures.

In the year 2000, long term McConaghy employees, Jono Morris and Mark Evans embraced the opportunity to take over the company from founder John McConaghy and long time business partner Steve Moxham. Since that time, the company has continued to pursue a very conservative financial strategy while also diversifying to extend its revenue base, a strategy that has seen it triple in size in the past decade.

MEMBER (AM) IN THE GENERAL DIVISION OF THE ORDER OF AUSTRALIA
Dr John Huston STEWART, Balgowlah
For significant service to medicine as a nephrologist.

MEDAL (OAM) OF THE ORDER OF AUSTRALIA IN THE GENERAL DIVISION
Mrs Joan BRATEL, Balgowlah
For service to people with cerebral palsy.

The NSW RFS History Website was created under the guidance of NSW RFS Honorary Historian, Alan Brinkworth AFSM, and much of the content is from Alan’s personal collection.

Since 1972 Alan has been documenting the history of the Service and his collection includes memorabilia such as posters, brochures, publications, photographs, signs, badges, patches, decals, stickers, dress and operational uniforms, helmets, hoses, fittings, hand tools and small equipment, radios and phones.

Alan Brinkworth inside truck: Taken in 1979.

MEDAL (OAM) OF THE ORDER OF AUSTRALIA IN THE GENERAL DIVISION
Mrs Lynleigh Dawn GREIG, Elanora Heights
For service to wildlife conservation.

The award was announced at the annual Zonta International Women’s Day Breakfast, at Royal Prince Alfred Yacht Club, and recognises outstanding achievements of local women and their valuable contribution to the Pittwater community.

Over the past 10 years Lynleigh has volunteered countless hours supporting injured and vulnerable wildlife, including during the 2019/20 catastrophic bushfires across NSW. Lynleigh has also been instrumental in establishing Sydney Wildlife Rescue’s mobile care unit, which provides deployable treatment in emergency situations.

“Lynleigh is a passionate advocate for our native wildlife and is widely regarded for her fearlessness and expert knowledge,” Rob Stokes said.

“Many locals have called upon Lynleigh when faced with snakes, possums, lizards and other types of uninvited wildlife in their homes.

“Lynleigh has an encyclopaedic knowledge of wildlife and has an enviable ability to calmly wrangle, rescue and relocate those creatures that make many of us squirm.

“In a community like ours that’s fortunate to be surrounded by bushland and national parks – wildlife volunteers like Lynleigh are invaluable.

“Lynleigh’s enthusiasm, knowledge and approachability is evident to everyone that’s sought her assistance and seen her at work.

“The role Lynleigh and other volunteers performed in the aftermath of the fires was particularly important and has directly benefited our state’s wildlife recovery.

“This award is a fitting recognition of Lynleigh’s enormous efforts and ongoing contribution to our community,” Rob Stokes said. 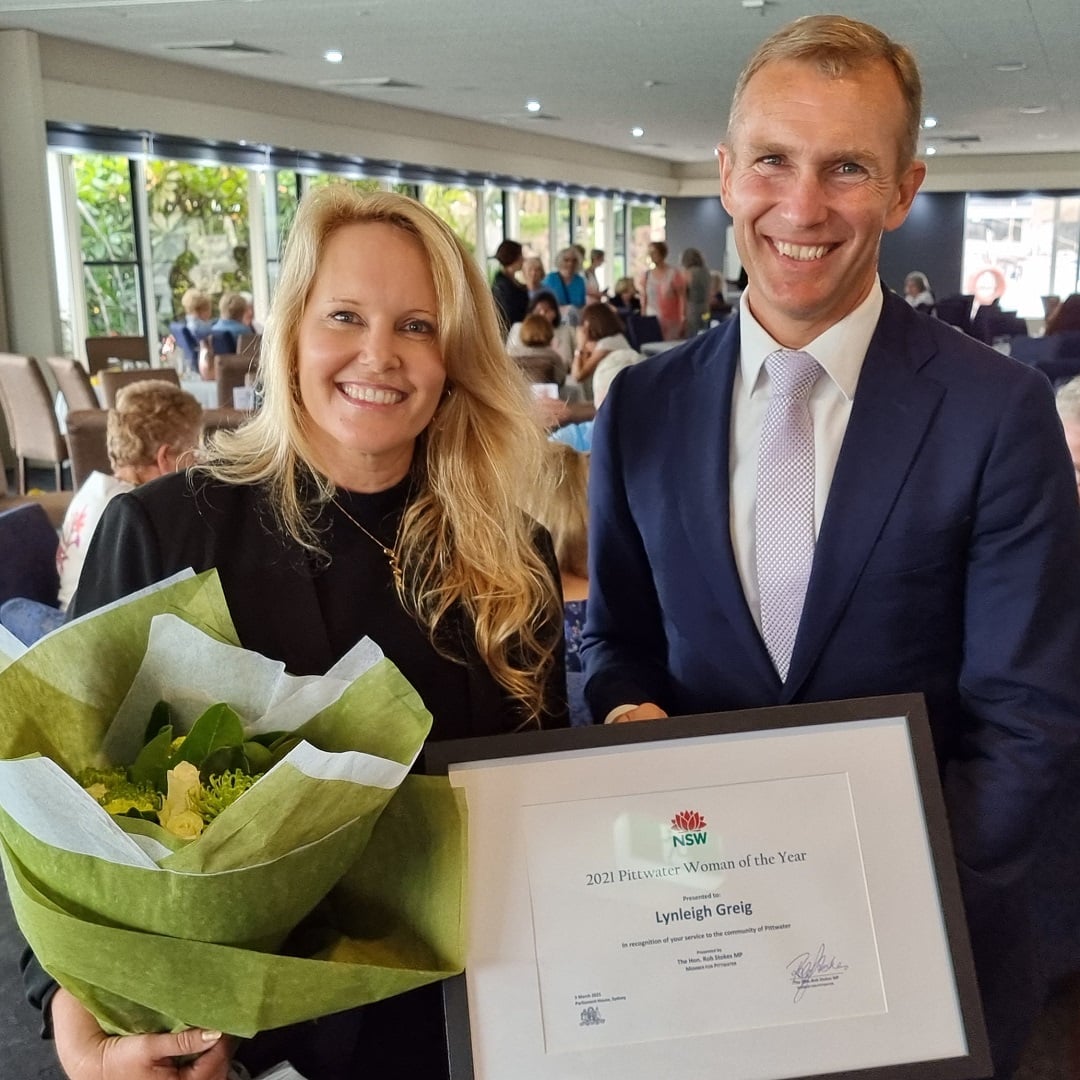 Many long-term Readers will have read some of the articles and reports Lynleigh writes for Pittwater Online News over the years. Every form of wildlife that can be found here has featured at one time or another. More than that, Lynleigh has also run timely information for when snakes emerge, or when newly fledged birds may be found out of nests. Lynleigh's information on how to check the pouches of mothers of wildlife hit by cars on our roads for young frequently is revisited.

Lynleigh's work as a volunteer wildlife rescuer goes beyond sharing her knowledge and experiences though. She is in demand speaker at schools and for local organisations, gets her hands in the dirt to help maintain facilities at the Sydney Wildlife Waratah Park Rehabilitation centre, trained to become a reptile handler, trained to become on of those licensed to dart macropods as part of rescues, has been and continues to be an articulate speaker when media focus on the plight of our wildlife comes into focus, particularly during the 2019/2020 bushfires, then throws on a spiffy dress to host fundraisers to support the work of wildlife carers; the medicines needed, the facilities that need an upgrade or even to be built.

In the Spring of 2019, Lynleigh sent in a report about fitting out the van. Then came the fireball Summer of 2019-2020 and the horrific impact this had on our wildlife in the firegrounds.

This was the van’s ‘maiden voyage’ so it was very special for the wildlife carers and veterinarians travelling with them to enjoy some community spirit with a great send off. There was a convoy as along with the van, 6 volunteer veterinarians, 3 volunteer rescuers, 3 kangaroo joeys and a few media crews went with them.  The wonderful veterinarians volunteering on this trip were Dr Margot Horder, Dr Caroline Woods and Dr Nandita Kataria - all from Collaroy Plateau Veterinary Hospital; Dr Izi Sladakovic from NVS/AVES in Terrey Hills; Dr Kathleen Graham from Kellyville Veterinary Clinic;  and Dr John Thirlwell and Kimberley Moore from Belrose Veterinary Hospital. Full report in: Sydney Wildlife Mobile Clinic's Inaugural Run Into The New South Wales Firegrounds Has Been Supported By The World's Leading Wildlife Organisations and Carers: January 2020

The emotional impact on all the wildlife carers the team went to help, along with that team itself, was devastating. The physical strain, which went on for months, is hard to understand for those outside of this field.

Becoming a wildlife carer is a little alike becoming a new mum with 2am and 5am and 11pm feeds - only this goes on for as long as you are caring for an animal, and in the Greig household, sometimes there are a variety of 'critters' that need attending to - dressing wounds, giving medicines, feeding. It's a 24 hours 7 days a week job. If you want time off you have to find someone who can step in and undertake that work load.

Then there's those that don't make it, or make it and then pass away unexpectedly. Lynleigh's report on the much loved Cloudy still brings many to the point of anger over how careless human beings are around other animals while others are simply reduced to tears, over and over.

It's not for the faint hearted - you have be strong willed, resilient, determined, and ultimately, have a very big hearted.

MEDAL (OAM) OF THE ORDER OF AUSTRALIA IN THE GENERAL DIVISION
Ms Jennifer Mary JONES
For service to family and child health nursing.

MEDAL (OAM) OF THE ORDER OF AUSTRALIA IN THE GENERAL DIVISION
Ms Janet Helen JUDD, Narrabeen
For service to conservation and the environment.

MEDAL (OAM) OF THE ORDER OF AUSTRALIA IN THE GENERAL DIVISION
Dr Jonathan Leslie KING, Avalon Beach
For service to community history.

Author of approximately 30 books including:

Involved in the production of approximately 20 documentaries/films, on Australia's heritage including:

MEDAL (OAM) OF THE ORDER OF AUSTRALIA IN THE GENERAL DIVISION
Dr Daniel John WHITE, Narrabeen
For service to education.

Mrs Amanda Farrar is currently serving as the Director, Public Affairs and Development at the Australian Museum. She has demonstrated exceptional leadership, dedication and determination, making a significant contribution to the Australian Museum in the areas of environmental sustainability, accessibility and inclusion, and fundraising strategies.

Mrs Farrar has also been the key driver of the Australian Museum's Access & Inclusion Action Plan. The Plan has seen a multitude of physical facility changes in the Museum making it more welcoming to people with physical and intellectual disabilities. She has also overseen the implementation of early morning openings for children with autism to explore an uncrowded Museum.

As champion of the Museum's Reconciliation Action Plan, Mrs Farrar's passion for First Nations inclusion has been inspiring. She delicately navigates what can, for some, be a challenging issue with empathy and care. The Australian Museum's recent award winning First Nations exhibition ‘Unsettled' reflects Mrs Farrar's dedication to this cause.

From the Australian Museum Foundation perspective, Mrs Farrar has been enormously helpful in expanding the philanthropic support for the museum, helping shape the donor strategy, meeting with donors to develop proposals that resonate, and following through to secure large donations. Her dedication has seen philanthropic revenue increase by 500% since she assumed her role.

Mrs Farrar has led with drive and commitment, patience, pragmatism and intelligence. Her efforts have ensured the Australian Museum remains a hallmark cultural institution for generations to come.