upgrade of Mona Vale Road East to Commence this Month

In November 2018 Member for Pittwater Rob Stokes announced the NSW Government has awarded the construction contract for the upgrade of Mona Vale Road East. The contract was awarded to Georgiou Group Pty Ltd and onsite works are expected to commence in February next year, after the summer holiday period. The project is expected to be completed in 2022.

On Tuesday January 29th the contractor will commence preliminary works such as installing traffic controls, such as barriers, signs, linemarking, setting up the site compound for the project team and delivering materials and equipment to site.

The $140 million project, between Foley Street at Mona Vale and Manor Road at Ingleside, will involve building additional climbing and descending lanes to improve travel times, and the introduction of median separation and a heavy vehicle arrester bed to help address the road’s tragic crash history.

What can you expect during construction?

During construction, Roads and Maritime will aim to minimise the impact on businesses, residents and the community. However, this is a significant project and there will be disruptions including:

• noise and dust from rock cuttings

• traffic changes such as contra-flows and detours

• traffic delays, including additional heavy vehicles on the roads

• major utility relocations in and around Ponderosa Parade, Samuel Street and Foley Street.

Standard working hours on the project will be between 7am and 6pm from Monday to Friday and 8am to 1pm on Saturdays.

As part of the upgrade, the intersection of Mona Vale Road and Ponderosa Parade will be changed to a traffic light intersection.

Features of the new intersection include:

• dedicated right-hand turn lanes on all approaches to the intersection

• left-hand slip lanes on all approaches to the intersection.

The upgraded intersection will significantly improve safety at this location, and improve traffic flow entering and exiting the commercial area

The work is expected to take up to 16 weeks to complete, with some work carried out at night for the safety of workers and motorists.  Affected residents will be notified in advance of all work, and notifications are available on our website and via email distribution.

During clearing, an independent ecologist is on site to ensure no animals are harmed and any found are relocated to a safe habitat.

The project’s Construction Flora and Fauna Management Plan will be in place to ensure appropriate measures are in place to protect the environment during construction, including establishing exclusion zones and regular monitoring.

We will take some excess material to the Mona Vale Road West section where it will be used to build an embankment in readiness for the future widening work on the West project. Work will include relocating power poles, drainage and removing vegetation.

The two projects have been designed to ensure a minimum amount of material is removed from the projects combined. This will reduce the number of truck movements along the corridor, overall cost for both projects, and reduce our carbon footprint.

The work to build this embankment will form part of the early work for the Mona Vale Road West upgrade, and will start from the first quarter 2019. The work will cover around 850 square metres on the northern side of Mona Vale Road, between Kimbriki Road and Tumburra Street, Ingleside.

Construction is expected to commence in 2021, subject to funding.

If you have any questions please contact the project team. 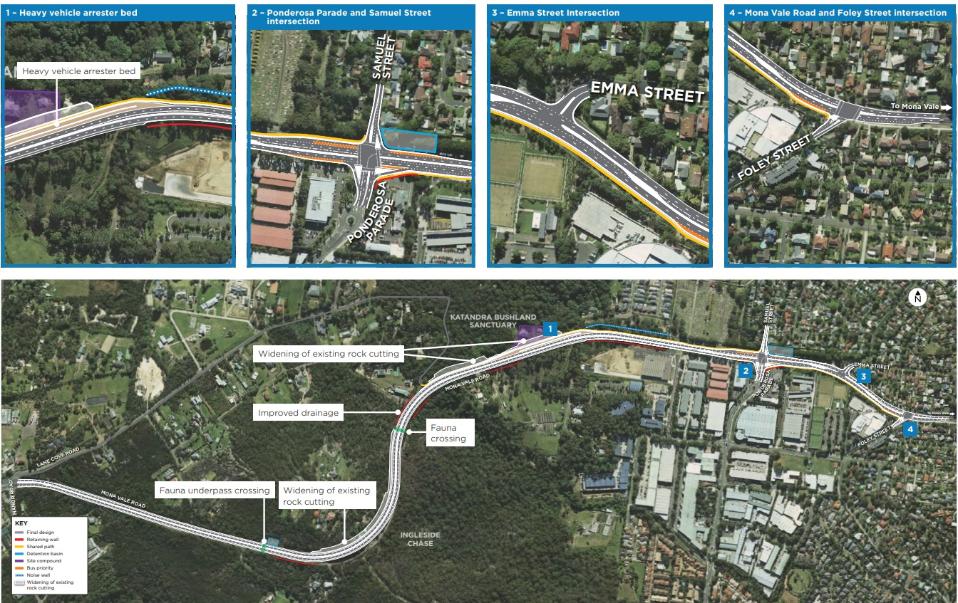