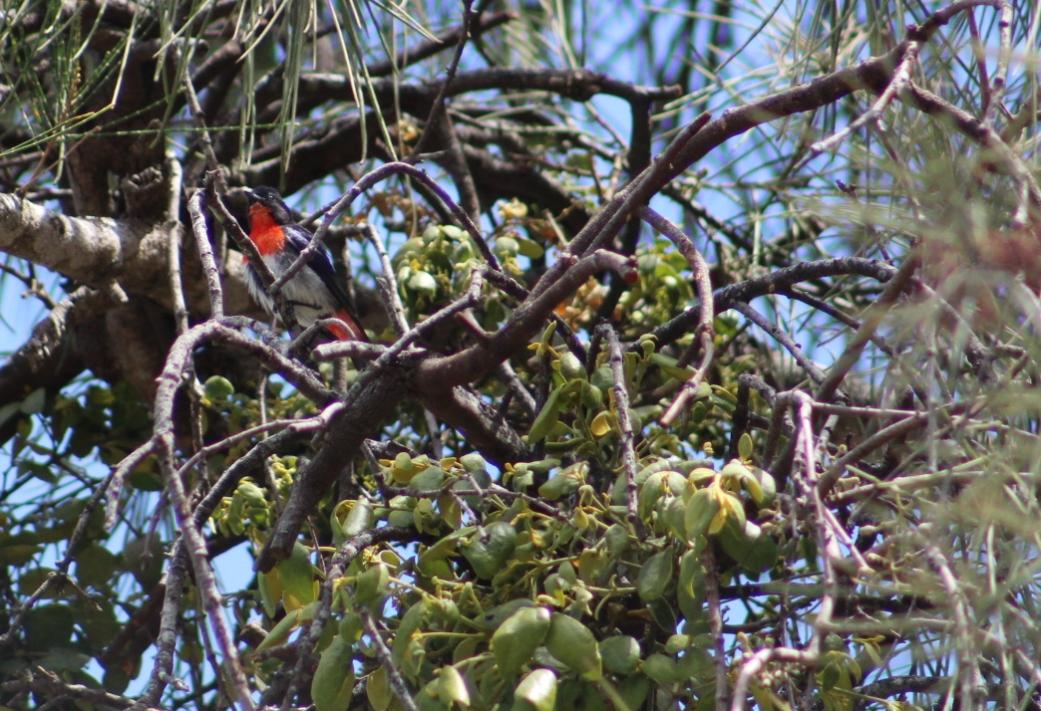 Of all the birds about the bush
The busiest I know
Is the Mistletoe-bird, because he has
To plant the mistletoe.
He eats the berries and keeps the seed,
And puts it on branches to grow :
And it’s very hard work for a little bird
To be planting mistletoe.
He has planted all over Australia now,
As far as he can go :
But he hasn't had time for Tasmania yet,
So it has no mistletoe.
from "Tales and Tarradiddles", by The Perfessor and Alter Ego, Esq. 1925. Angus and Robertson.
actually written and illustrated by Launcelot Harrison (1880-1928), zoologist.
The mistletoebird (Dicaeum hirundinaceum), also known as the mistletoe flowerpecker, is a species of flowerpecker native to most of Australia (though absent from Tasmania and the driest desert areas) and also to the eastern Maluku Islands of Indonesia in the Arafura Sea between Australia and New Guinea. The mistletoebird eats mainly the berries of the parasiticmistletoe and has adapted its digestive system to help spread the mistletoe seeds.
The mistletoebird is one of 44 species of flowerpeckers (Family: Dicaeidae). Flowerpeckers are considered to be nearest in avian evolutionary relationship to the sunbirds (Family: Nectriniidae). Both the flowerpeckers and sunbirds are thought to be early offshoots of the early passeroid radiation that occurred 20-30 million years ago.
The mistletoebird is a geologically recent arrival into Australia from South-East Asia. It is thought to have started colonising Australia from about two million years ago. 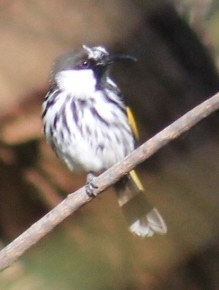 Mistletoebirds are a mistletoe feeding specialist and mistletoe feeding specialists have evolved independently in eight of the world's avian families. This extreme dietary specialization has evolved in non-passerine as well as sub-oscine and oscine passerines. Early scientific research had the mistletoe and mistletoebird mutually co-evolving with a high dependence on each other through their evolutionary development. As the mistletoe has been in Australia for a long time and mistletoebirds for a relatively short time, the mistletoe seed was distributed originally by non-specialized frugivore birds like the honeyeater. Even though the mistletoebird has evolved into a very efficient local distributor of mistletoe seeds, the mistletoebird needs the mistletoe but the mistletoe does not need the mistletoebird. [1.]
Right: white cheeked honeyeater - AJG Photo
Molecular-based scientific methods have been used recently to evaluate generic taxonomy within the flowerpeckers family. The flowerpicker genetic subdivision is based on a single morphological character- the length of the outermost primary wing feather. Most flowerpickers are sexually dichromatic, have stouter bills than sunbirds and display a broad variety of tongue structure. Genetic analysis of mitochondrial DNA of 70% of flowerpecker species showed the mistletoebird and red-capped flowerpecker (D. geelvinkianum) to be each other's closest relative.
The mistletoebird derives its name from the name of the swallow (Hirundo) and refers to its long and pointed swallow-like wings.
There are four recognised subspecies, which differ in geographical location and plumage details, primarily of the males:
Dicaeum hirundinaceum hirundinaceum Shaw & Nodder, 1792 — Australia (extensive red on throat and chest; flanks grey)
Dicaeum hirundinaceum keiense Salvadori, 1874 — Watubela archipelago, Indonesia (red on chest limited)
Dicaeum hirundinaceum ignicolle G. R. Gray, 1858 — Aru Islands, Indonesia (flanks yellow-buff)
Dicaeum hirundinaceum fulgidum P. L. Sclater, 1883 — Tanimbar Islands, Indonesia (flanks buff, red on chest limited, and throat pale buff)
The mistletoebird is small, 9–10 cm long and 7.5–11 g weight. The male is glossy blue-black above, with a red chest and a slight red under-tail, and a black center stripe running down its white belly. The female is dark grey above, with a white throat, light grey underparts, and just a touch of pinkish-red under the tail. The eyes, bill and legs are black; the bill is just over a centimeter long, slender, slightly down-curved and sharply pointed. Immature birds are similar to the female, but have an orange-pink bill instead of black.
There is a variance in size and colour across their distribution. The adult mistletoebird is smaller in the north of its distribution and females in the north have lighter coloured underparts compared to darker ones in the south. 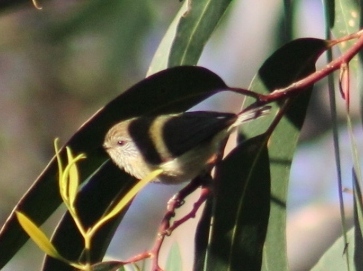 The mistletoebird has long pointed wings and a short square tail with a slight notch at the tip. They usually occur singularly or in twos but occasionally in small family groups or flocks and very occasionally in mixed-species flocks when food is in abundance.
Their flight is swift and are usually seen flying above or high in the tree canopy on distinctively pointed wings., while posture is usually upright when perched but adopt a more horizontal, swaying posture when alarmed. The male mistletoe bird can be mistaken for a scarlet robin (Petroica multicolor) or flame robin (Petroica phoenicea) but has no spot on the forehead and has a black streak on the white belly.
Right: Thornbill - at Ingleside. AJG Photo.
Due to the combination of size, shape, behavior and plumage the Mistletoebird is unlikely to be mistaken for any other Australian passerine, however the Pardalote and Thornbill are the closest in size and shape. 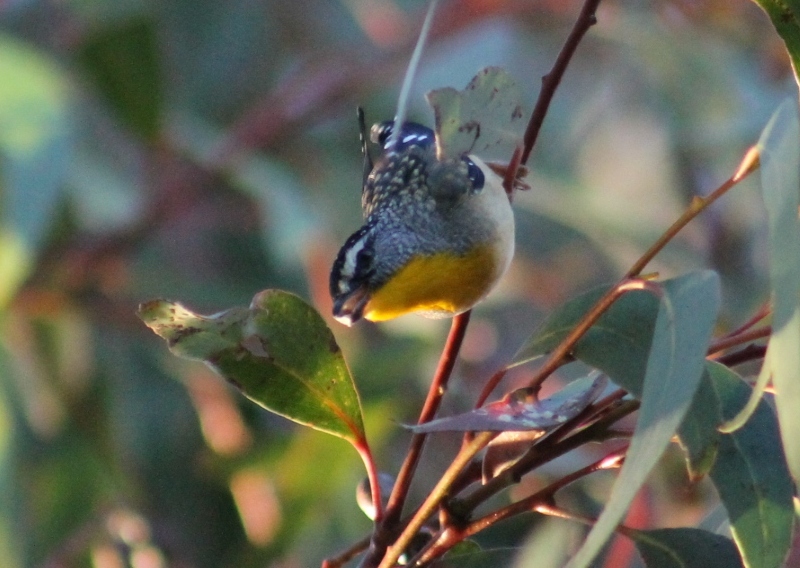 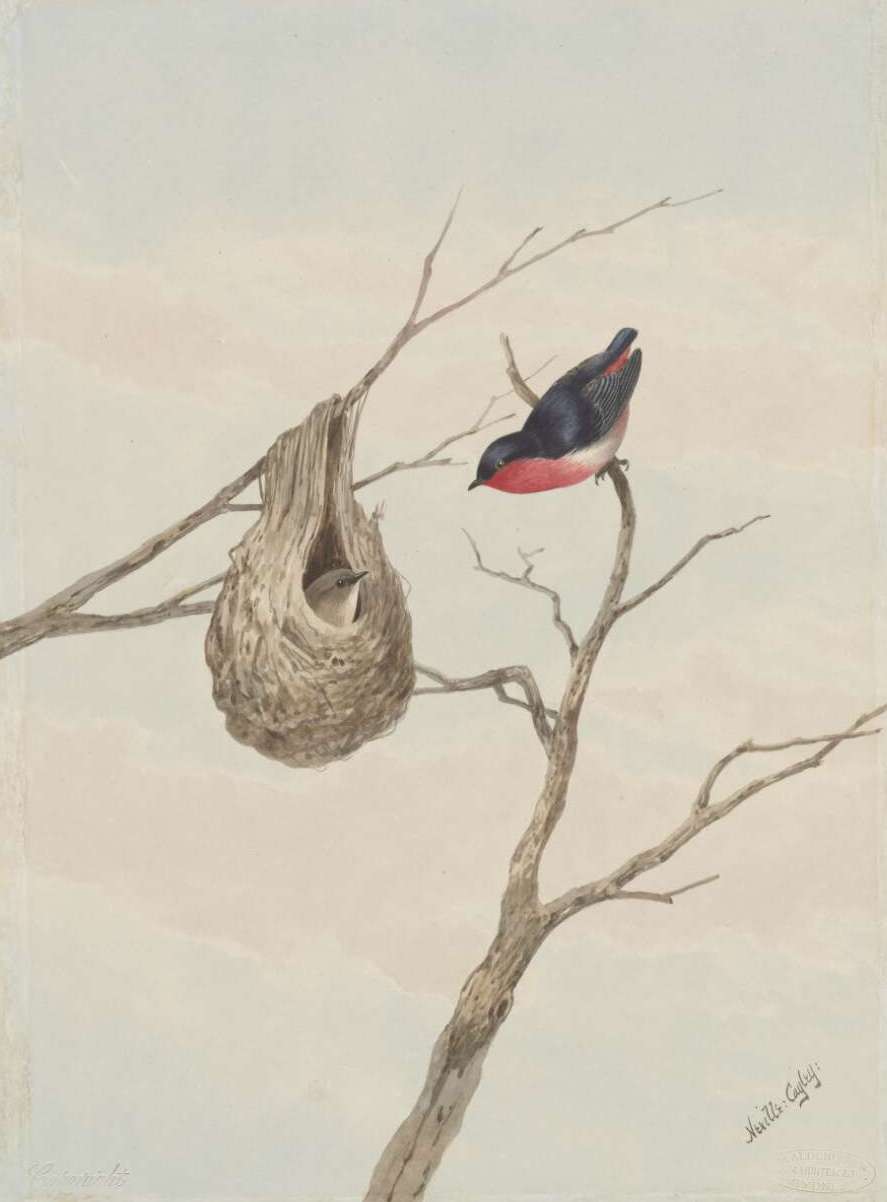 Mistletoe bird by Neville Cayley (1854-1903) - created 189?, courtesy National Library of Australia - PIC Drawer 6431 #R6318-Mistletoe bird.
They have a variety of vocalizations but their most familiar is a short sharp high pitched tzew or dzee whistled mainly on the wing. Songs while perched include a whistled wissweet wissweet, uttered repeatedly. Mistletoebirds can vocally mimic other birds. Heard in all seasons and sung by both sexes, they have been recorded mimicking the mulga parrot ( Psephotus varius) as well as more than 25 different species of passerines. 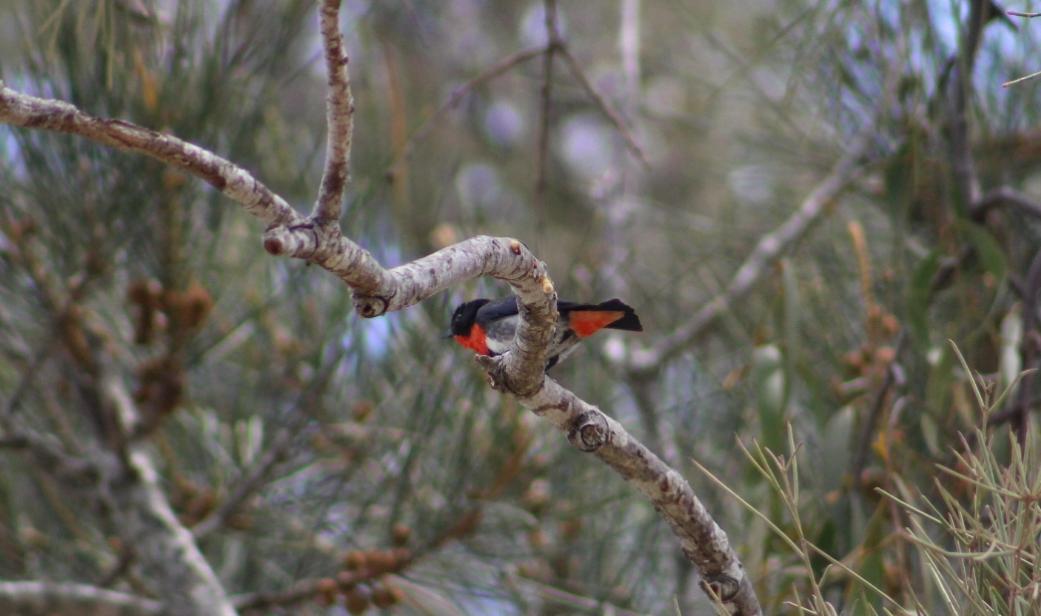 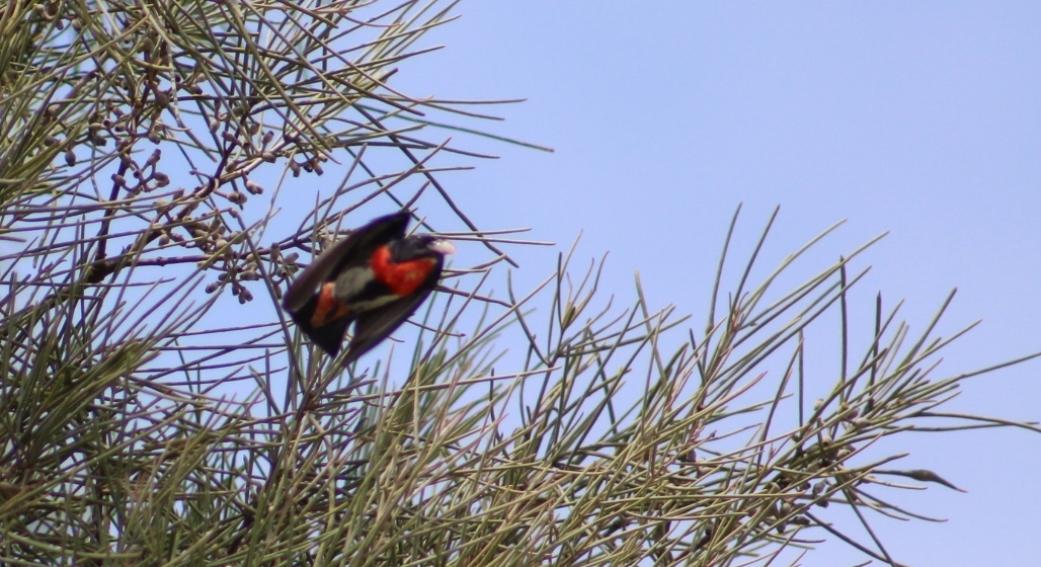 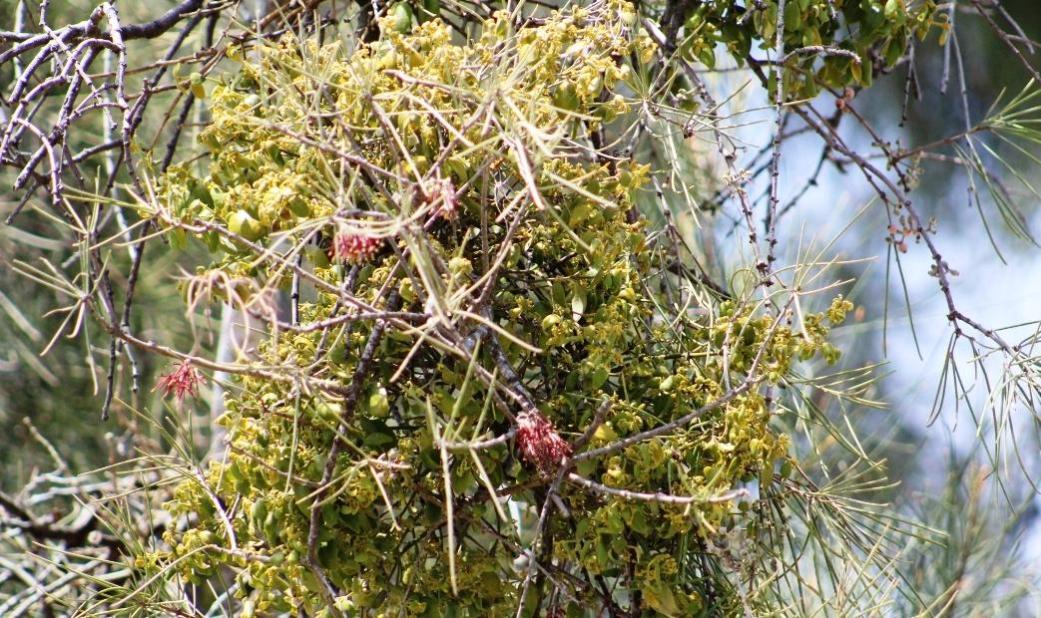 Mistletoe is the common name for most obligate hemiparasitic plants in the order Santalales. Mistletoes attach to and penetrate the branches of a tree or shrub by a structure called the haustorium, through which they absorb water and nutrients from the host plant.
The name mistletoe originally referred to the species Viscum album (European mistletoe, of the family Santalaceae in the order Santalales); it was the only species native to Great Britain and much of Europe. A separate species, Viscum cruciatum, occurs in Southwest Spain and Southern Portugal, as well as North Africa, Australia and Asia.
Over the centuries, the term has been broadened to include many other species of parasitic plants with similar habits, found in other parts of the world, that are classified in different genera and even families — such as the Misodendraceae and the Loranthaceae.
Parasitism has evolved at least twelve times among the vascular plants; and of those, the parasitic mistletoe habit has evolved independently five times, in the Misodendraceae, Loranthaceae, and Santalaceae, including the former separate families Eremolepidaceae and Viscaceae.
The largest family of mistletoes, the Loranthaceae, has 73 genera and over 900 species. Subtropical and tropical climates have markedly more mistletoe species; Australia has 85, of which 71 are in Loranthaceae, and 14 in Santalaceae.
The word 'mistletoe' derives from the older form 'mistle', adding the Old English word tān (twig). 'Mistle' is common Germanic (Old High German mistil, Middle High German. mistel, Old English mistel, Old Norse mistil). Before 1000; Middle English mistelto, apparently back formation from Old English misteltān (mistel mistletoe, basil + tān twig), the -n being taken as plural ending; cognate with Old Norse mistilteinn
Mistletoe was often considered a pest that killed trees and devalued natural habitats, but was recently recognised as an ecological keystone species, an organism that has a disproportionately pervasive influence over its community. A broad array of animals depend on mistletoe for food, consuming the leaves and young shoots, transferring pollen between plants and dispersing the sticky seeds.
In Australia the diamond firetail and painted honeyeater are recorded as nesting in different mistletoes. More than 240 species of birds that nest in foliage in Australia have been recorded nesting in mistletoe, representing more than 75% of the resident birds in some areas.
A study of mistletoe in junipers concluded that more juniper berries sprout in stands where mistletoe is present, as the mistletoe attracts berry-eating birds which also eat juniper berries. Such interactions lead to dramatic influences on diversity, as areas with greater mistletoe densities support higher diversities of animals. To some, rather than being a pest, mistletoe can have a positive effect on biodiversity, providing high quality food and habitat for a broad range of animals in forests and woodlands worldwide.
Mistletoe is relevant to several cultures. It is associated with Christmas as a decoration, under which lovers are expected to kiss. Mistletoe played an important role in Druidic mythology in the Ritual of Oak and Mistletoe.
In Norse Mythology, Loki tricked the blind god Hodur into murdering Balder with an arrow made of Mistletoe, being the only plant to which Balder was vulnerable. Some versions of the story have mistletoe becoming a symbol of peace and friendship to compensate for its part in the murder.
Mistletoe continued to be associated with fertility and vitality through the Middle Ages, and by the 18th century it had also become incorporated into Christmas celebrations around the world. The custom of kissing under the mistletoe is referred to in late 18th century England: the serving class of Victorian England is credited with perpetuating the tradition. The tradition dictated that a man was allowed to kiss any woman standing underneath mistletoe, and that bad luck would befall any woman who refused the kiss. One variation on the tradition stated that with each kiss a berry was to be plucked from the mistletoe, and the kissing must stop after all the berries had been removed.
Mistletoe. (2016, October 25). In Wikipedia, The Free Encyclopedia. Retrieved  from https://en.wikipedia.org/w/index.php?title=Mistletoe&oldid=746185550
For Jan: Mistletoebird At Bayview - A J Guesdon, 2016
Tweet