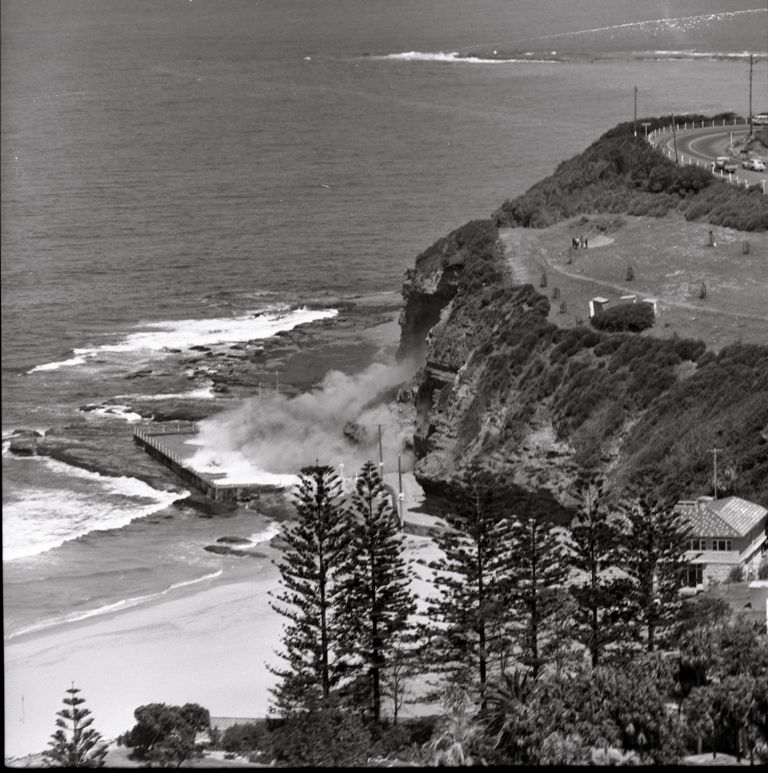 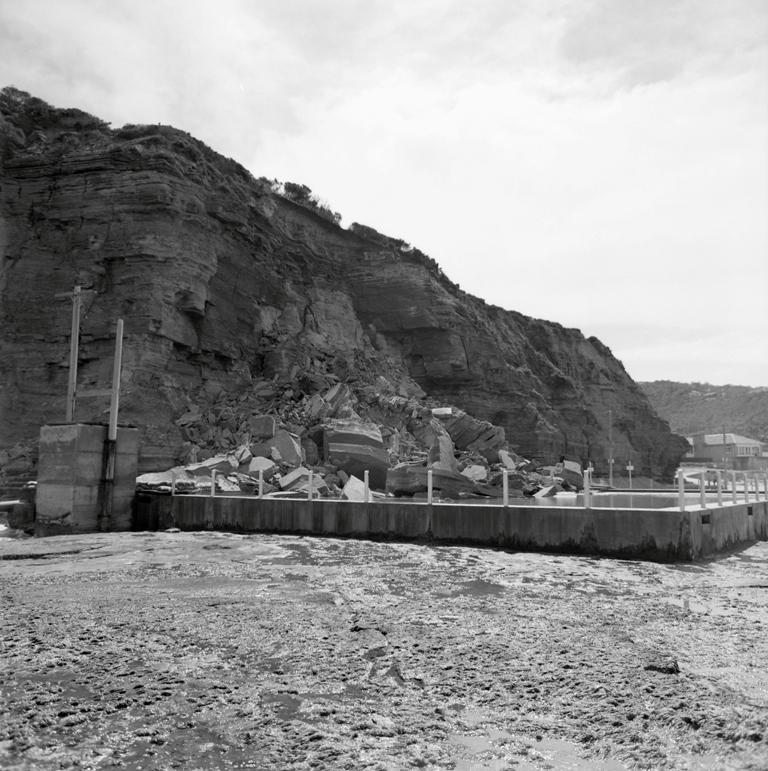 Our Profile of the Week for this Issue is John W. Stone, the gentleman who opened John Stone Photo & Record Centre in Avalon Beach in the mid-1960's and was the photographer for our area through the then weekly newspaper Pittwater News as well as the man who photographed babies at Mona Vale Hospital, Graduating Nurses, football matches, Surf Life Saving carnivals, ANZAC Day Marches and Services, wonderful landscapes - you name it, he probably took the photograph you saw or can still see of this.
Above are two from a series John took of safety works at Bilgola pool in October 1968, the top one in this set appeared in the now defunct Pittwater News. The article accompanying this states, "One of the blasts fired at Bilgola Beach last week dislodged about 3000 tons of rock that was dangerously overhanging the Bilgola swimming pool. Altogether 21 explosive charges were fired to shift the rock..."
Below is one of John's own personal favourites from among all those he took - this appeared in the May 12th, 1966 Issue of Pittwater News and shows Cadets from Pittwater High School forming the Guard of Honour at that year's ANZAC Day Commemoration Service, surrounded by local Returned Service people, with the much younger Guide Hall and a bushier Central Road in the background.
Has photography been a life-long passion for John Stone? - You bet it has!
This week, one of our greatest living treasures HERE 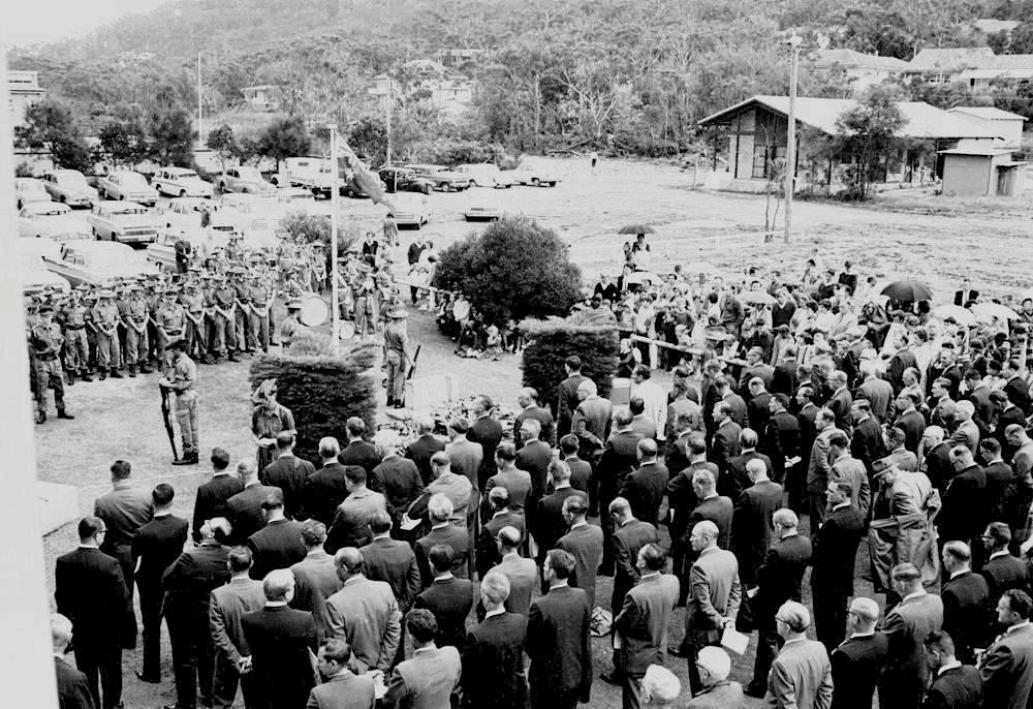 White-faced Heron in Careel Creek as three unleashed dogs and owner walk past
As you watch this white-faced heron, photographed Thursday morning, July 7th, you will notice it sees something going from right to left behind the bird-photographer, whom it's not too worried about, and edges itself further up the trunk of the tree it's standing on to get away from this something.
What this bird is seeing is three dogs off the leash and clearly is scared and attempting to put more distance between them. The owner of this three clearly didn't care that the bird was being scared by her canine companions and although they may be passive gentle dogs who would never chase a bird, the bird's reaction indicates that another 'wisdom' has been learnt by the feathered creatures who live here.
Even if you choose to disregard the signs everywhere indicating you must leash your dog, and the fact that it is law that dogs must be leashed in these areas when walking beside creeks, or kept out of them altogether when they are sanctuaries adjacent to the estuary, surely dog-walkers must realise their five minute jaunt for their furred lovelies is going through another's home. Perhaps they could consider how they would feel if an animal known to frighten dogs was given free reign to have a five minute jaunt through their dog's backyard or home.
Would you be so blasé and uncaring then?
Once at the end of the track beside the creek the owner decided to put one dog back on its lead before starting down the 'yellow brick road' into Avalon, but unfortunately another dog owner, with her dog off it's lead, was entering this path behind Barrenjoey High School to give her dog five minutes free reign in terrorising yet another creature in its home because she clearly didn't give a damn either.
Having witnessed one owner urging his Alsatian to go into the creek and chase birds, laughing while it did, or two other dogs in the creek chasing ducks, with no owners in sight for this two dog hunt pack, people may wonder if ours is the last generation to see these other residents of Pittwater living among us. 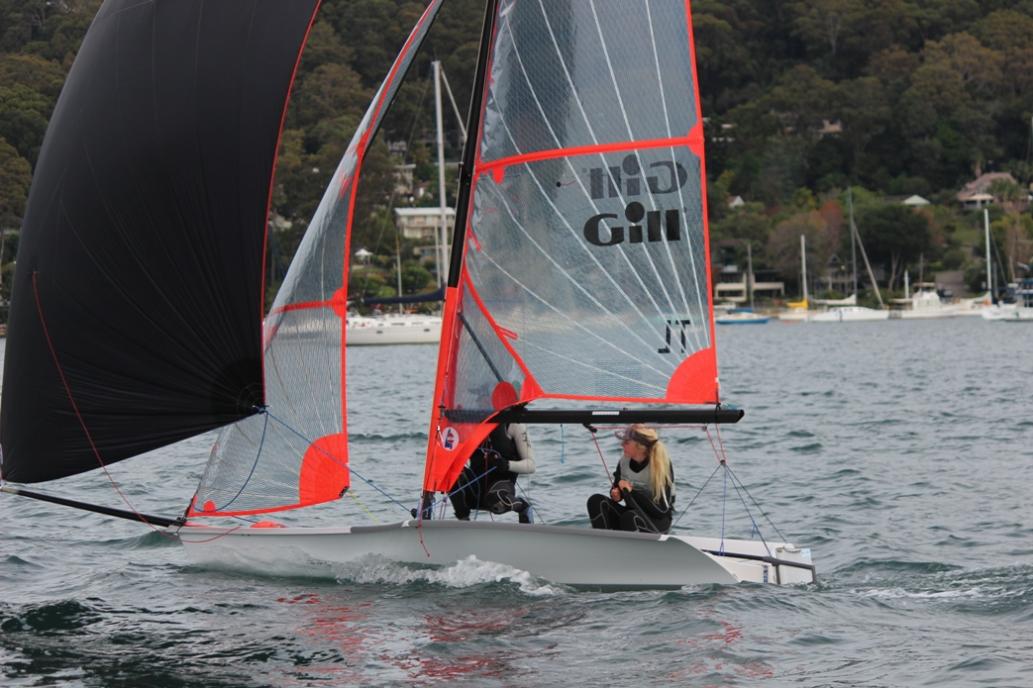 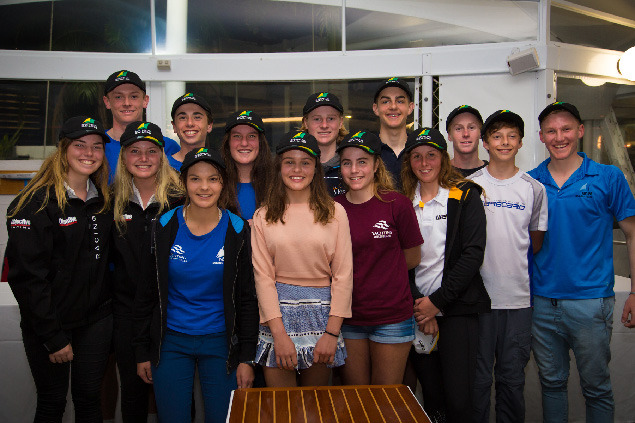 Australian Youth Sailing Team 2016 - photo by  Beau Outteridge
The group who have qualified are all ‘first-timers’ at the Youth Sailing World Championship, and will be vying to defend the Nations Trophy, which was won by the Aussies in 2015 in Langkawi, Malaysia.
The team is still to be ratified by the Australian Sailing Board. 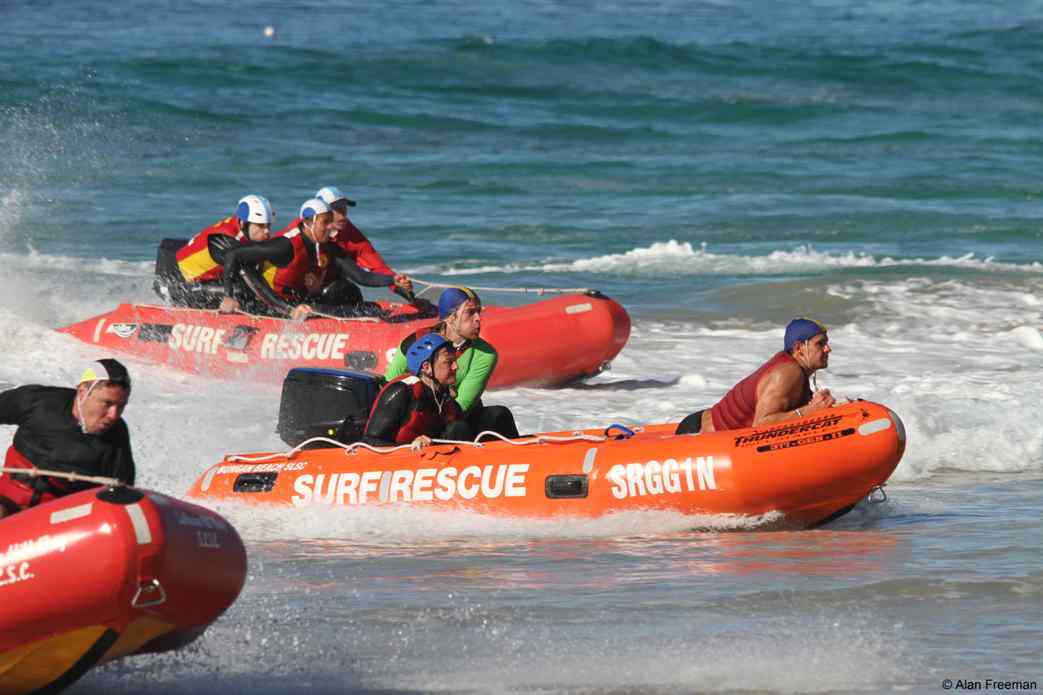 Pittwater IRB Teams Among The Medals At NSW IRB 2016 Championships 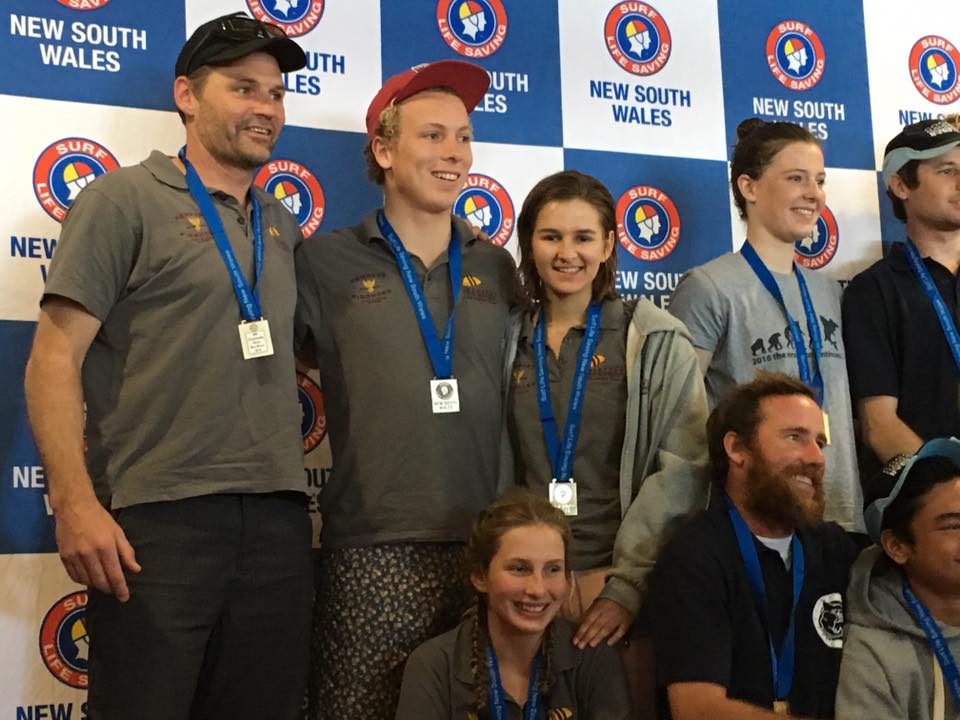 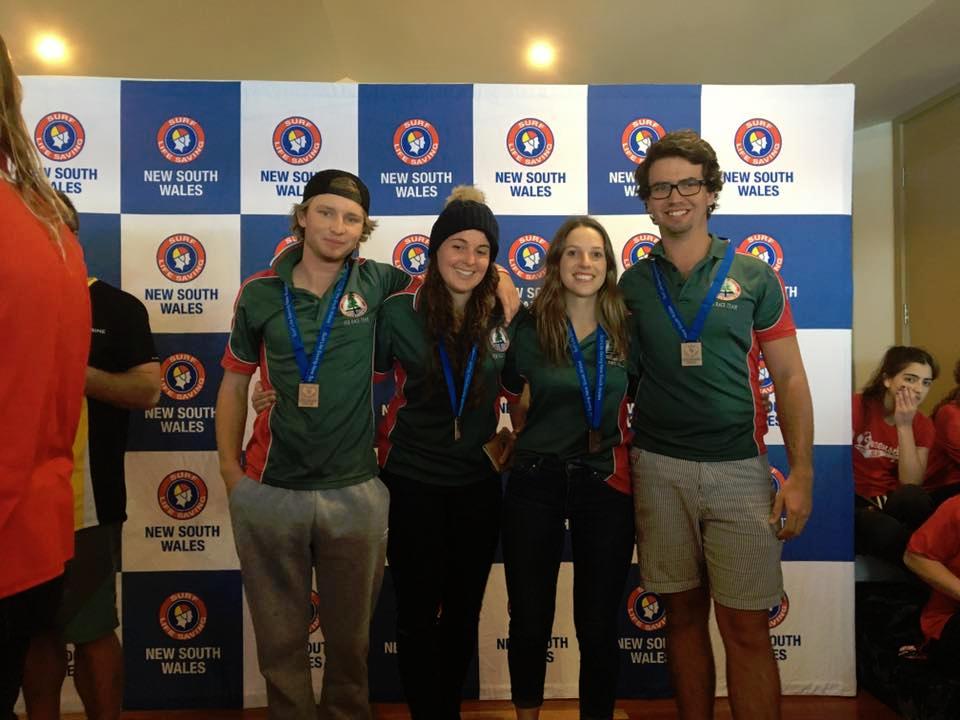 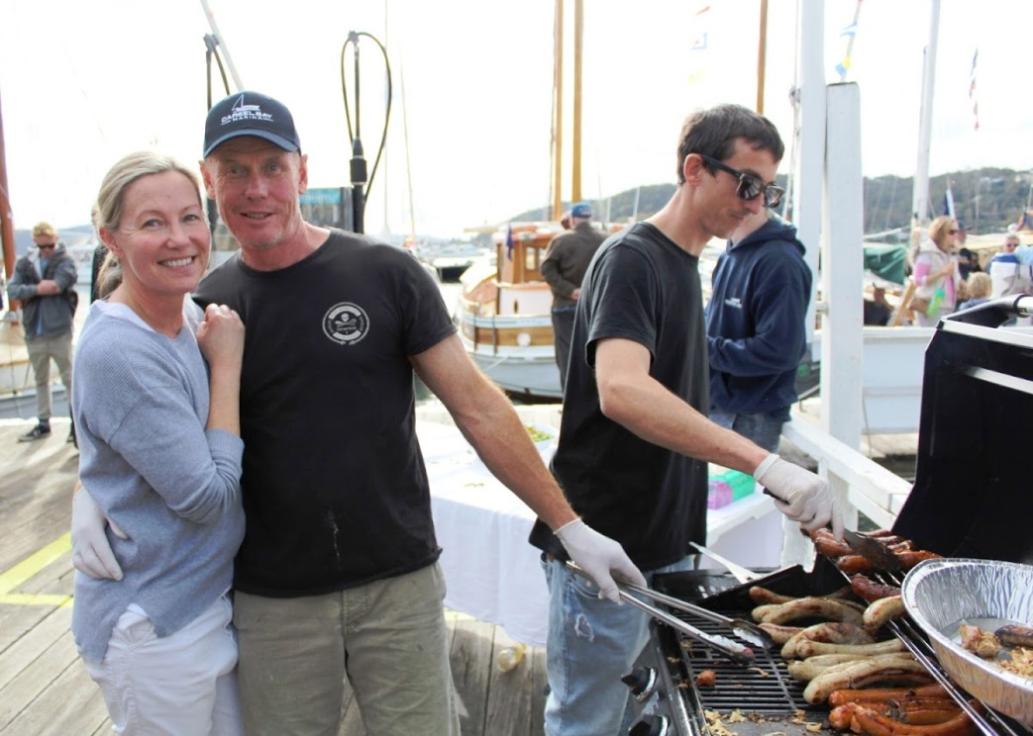 Anne-Marie and Gordon “Bluey” Woolcott, Careel Bay Marina proprietors, and crew, served up Gourmet Sausage and Salad rolls at the Inaugural Careel Bay Marine Winter Festival - July 9th, 2016.
The inaugural ‘Winter Festival’ at Careel Bay Marina (Saturday July 9th, 2016)featured 25 classic wooden yachts and cruisers – 17 tied up to the wharf and 8 on moorings offshore. Visitors were welcomed by a beautiful wooden skiff on entering the premises.
The car parking area was turned into a mini aquatics market place with great nautical antiques and collectibles, Artists showing Marine Art Sculptures (John Woulfe), beautiful photographs by Rita Kluge and even handmade cray pots!
Children were kept well entertained by Maria from ‘Silly Cheeks’ with face painting, balloon twisting and hula-hooping, while on the marina’s large deck great food could be eaten while listening to some excellent live music and basking in this sheltered nook’s Winter sunshine.
One attendee stated afterwards ‘Best boatie winter festival I have ever been to. 5 stars!’
Others raved about what a great learning experience the Careel Bay Marina Winter Festival was for children, especially with a gentle soul like Ray Gascoigne on hand to share salty tales of yore and explain the Art of Building Ships in Bottles.
More HERE 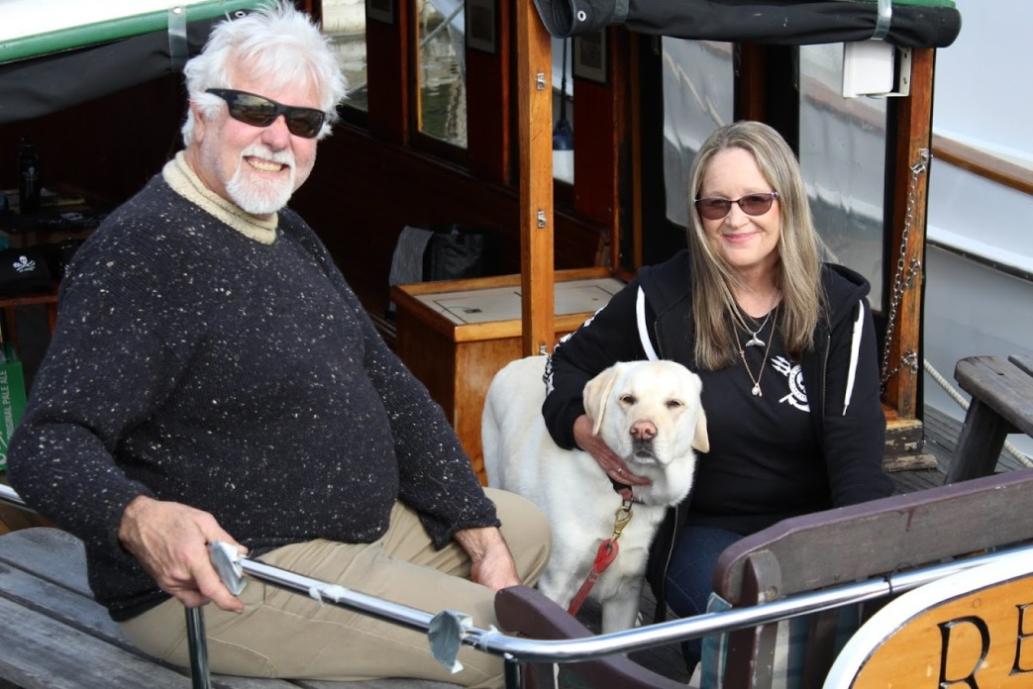 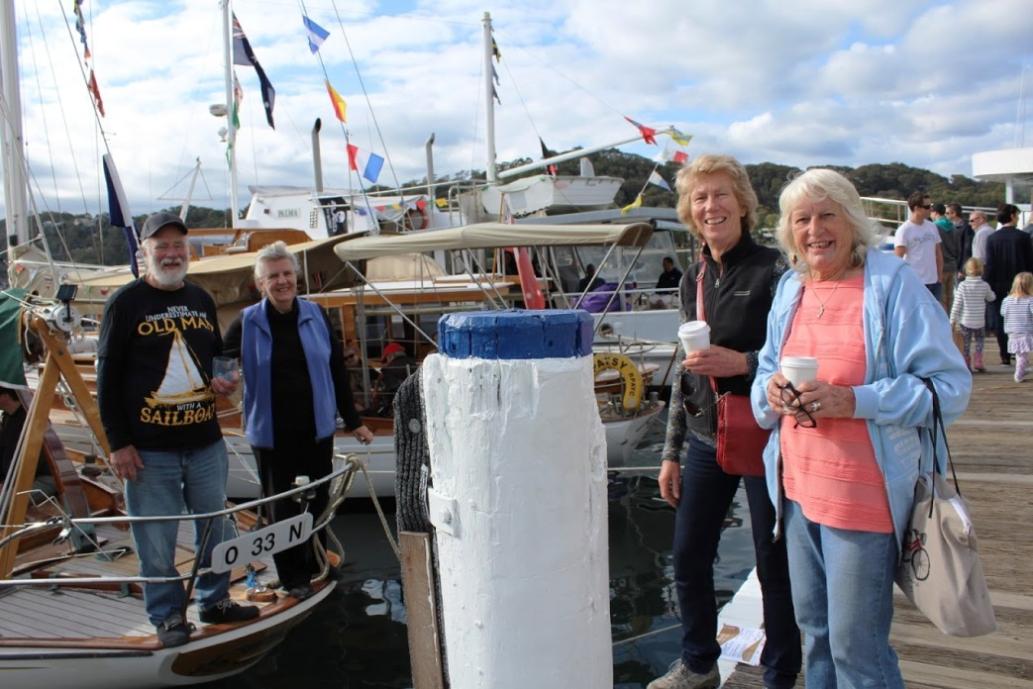