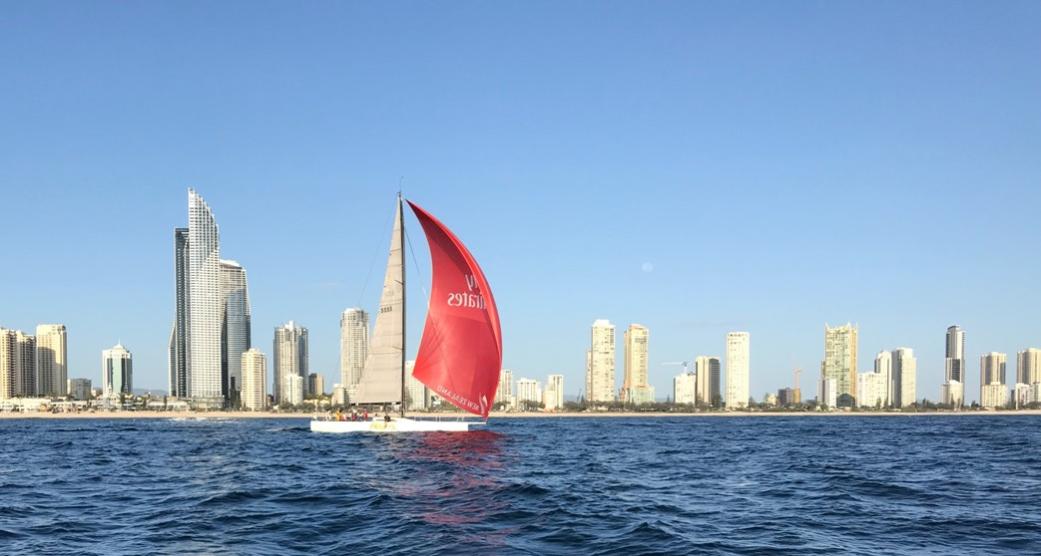 Michael Martin’s TP 52, Frantic enjoyed sensational sailing up the NSW north coast to arrive at Southport Yacht Club under the light of a full moon and rising sun at 07:24 AEDT, taking line honours in the 2018 Club Marine Pittwater to Paradise Regatta, Thursday 4 January.

After 418 nautical miles, compared to nearest rival Nine Dragons which sailed 398 nautical miles, Mick and the Frantic crew enjoyed a boaties’ breakfast at SYC, reflecting on the race, and declaring it “THE best race we’ve ever sailed!”

“We couldn’t have sailed better,” said the affable owner and skipper. “We had a crew of 12, long-term crew and a few new guys. It was a good race. Our fastest speed was 29.8 knots, but we were a constant 20 to 24. There was a period of calm for about 6 hours around Seal Rocks, and everybody caught up to us, but we eventually took off and did well to make it here in time for breakfast.”

Simon Hunter, Frantic boat manager and professional sailor, prepared the boat after the Sydney-Hobart, and admitted the toughest part of the race, since Boxing Day, was managing crew fatigue.

“It was all about making sure everybody was ready and fresh for their watch,” he said. “I think if we hadn’t been becalmed there for a while we could have smashed the race record and adding a World Record to our win.”

Frantic made the return from Hobart, where they came 11th in their Division and 24th over the line, just in time for the race start in the P2P.

“We did one of our quickest Hobarts,” continued Mick. “Two days and 1 hour. We got smashed around Flinders Island in 51 knot winds, and hit a sailfish, so we had a few repairs. We watched the New Year’s Eve fireworks on the NSW coastal towns as we headed back to Sydney. That was nice.

“But it was truly special to come into Southport with the full moon.”

During the race, key members of the Frantic crew were hit with tragic family news, which only motivated them to dig deeper for the win.

“We relied on each other for support, we’re all mates, and found strength in that to really pull out all stops and win it,” said Mick. “Sport is at the centre of Australian culture and that sense of mateship is what gets us through tough times.”

“We were neck and neck the whole way,” confirmed Michael Lockley. “It was awesome sailing the whole way. We hoped for second place, but the better boat won on the day.”

The appeal of the P2P, according to Michael is the mixed bag of conditions that summer sailing delivers. “We sailed upwind, downwind, and used every sail. We enjoyed the full spectrum of sailing. We used three different spinnakers, as well as J1, JT and J2.

“Our youthful bowmen were brilliant – Emily, James and Francois – and the camaraderie is really what it’s all about. What other sport is there where three generations can compete on the same team? Sailing allows every different age group and skill level to participate, and compete, and enjoy the sport for life.”

Second over the line and likely winner of IRC Division 1, Dk46 Nine Dragons, followed Frantic a few hours later at 11.28 AEDT, but enjoyed a close battle with the TP52 in the early stages of the race. 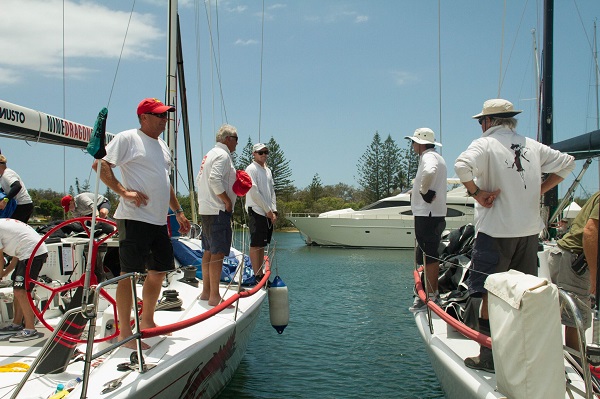 “In the early part of the race we were topping out at 20 knots and managed to hold Frantic for a while,” said a race weary but extremely affable Bob Cox.

“Then our newly purchased number 4 spinnaker exploded and we had nothing to put up. We had a great dice with them until we hit 25 knots and they disappeared.

“It was my choice not to take a heavy-duty spinnaker, so we had to wait till it was below 20 knots. The crew did a great job. We put up a number 4 headsail, then number 2 and a Code zero. Once it dropped to around 14 knots, we hoisted a light number 2 kite, which was out of its range, and then nursed the boat to the finish line.”

Bob praised the crew of Pretty Woman, describing them as “exceptional quality”.

“They pursued us relentlessly, but we managed to beat them. The real sleeper in the fleet was Checkmate, who had a great crew and extremely competitive IRC rating. So, although we didn’t see them during the race, we were aware they were pushing hard behind us. Congratulations to the crew of 90210 for a well-deserved win and to Pretty Woman for harassing us throughout the race. They fought hard and never gave up.”

Ann O’Brien, a school teacher at Stella Maris College, Manly, was competing in her first offshore race aboard Nine Dragons with two other women, Tracey Richardson and Alison Higgins, and said it was beyond her expectations. “The crew really made it,” she said. “There’s so much trust, camaraderie and banter. I would do it again . . . the day after tomorrow!”

Highs of her experience included scooting along at 20 knots with the full moon, spinnaker up and sea glistening. While the low point was “peeing in a bucket”.

Ann, who runs the girls’ sailing program at Middle Harbour Yacht Club, said P2P was exhilarating and an experience she would like to relive in 2019 – a thought shared by all crews as they arrived to the welcoming docks of SYC under brilliant blue skies.

“It was our first Australian race, after the disappointment of missing the Hobart,” said Michael Spies. “We backed ourselves. The competition wasn’t soft. Nine Dragons is an Australian champion. It wasn’t ideal conditions for our boat, but the boat lived up to our expectations – more than!

“Having run grand prix boats for 30 years, with a world champion crew, a mix of youth and experience, Checkmate was vastly different. It’s a 40 year-old timber boat, not carbon fibre. She’s a lot harder to steer, but more forgiving in motion, not as hard on the body. It was nice to have a hot meal and good sleep. We actually had an oven! It just proves the IRC rule is doing its job.”

In December, Ray Roberts competed in the Kings Cup in Thailand in his TP52, Team Hollywood, where they came second, then on to the Hobart in Hollywood Boulevard, taking 10th, and in Checkmate of Hollywood in the P2P which they are hopeful of claiming first IRC overall.

“Full credit to Ray Roberts and his enthusiasm for Checkmate and supporting this event,” continued Spiesy. “He had a vision and supported getting this boat back to Australia. For the crew, it was different, we worked hard without breaking the boat, learning about it on the way. There’s a lot of depth of talent and we prepared well for Hobart with new sails, which were flying for the first time in the P2P.”

Brilliant Pearl and Sticky retired in Coffs Harbour, while Jazzamatazz and Pelagic Magic had crew injuries and retired in Port Macquarie.

Galileo, Javelin and Amante, which tore its mainsail are yet to finish, expected in around 22.00 AEDT.

Following the 370nm category 2 ocean race is the Southport Yacht Club’s spectacular summer offshore sailing regatta, the Bartercard Sail Paradise series. Four days of racing will be staged on the beautiful ocean waters off the Gold Coast’s golden beaches from Saturday 6 to Tuesday 9 January 2018. Both events have been combined to create a new offshore series for competitors and the ultimate winner of the ‘Pittwater to Paradise Regatta’.

The Presentation was held at the Southport Yacht Club. 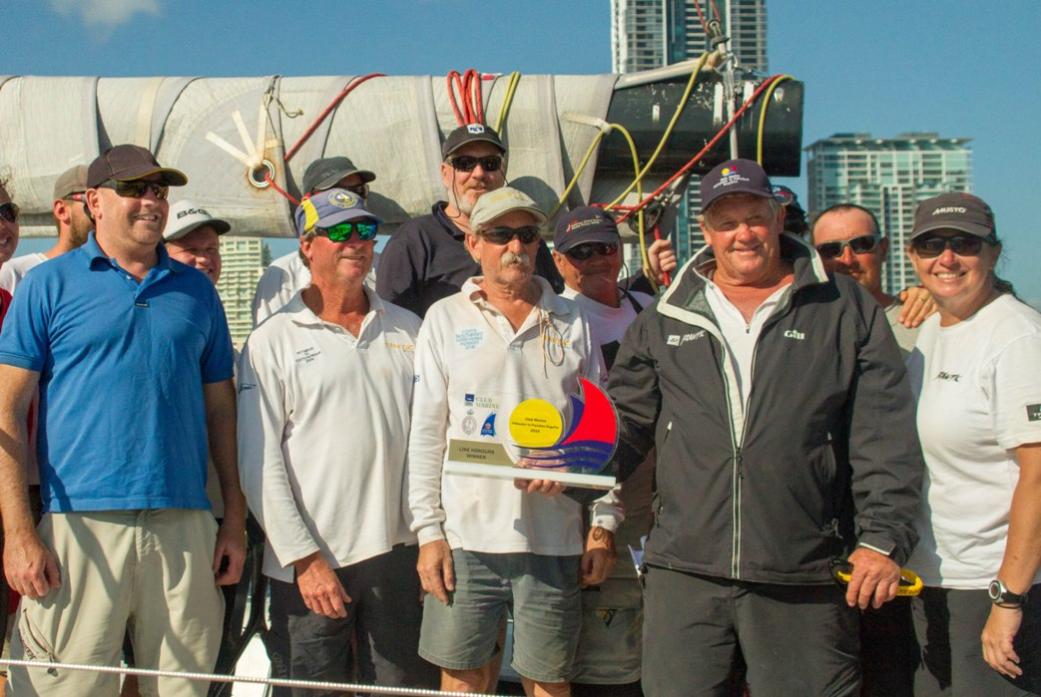