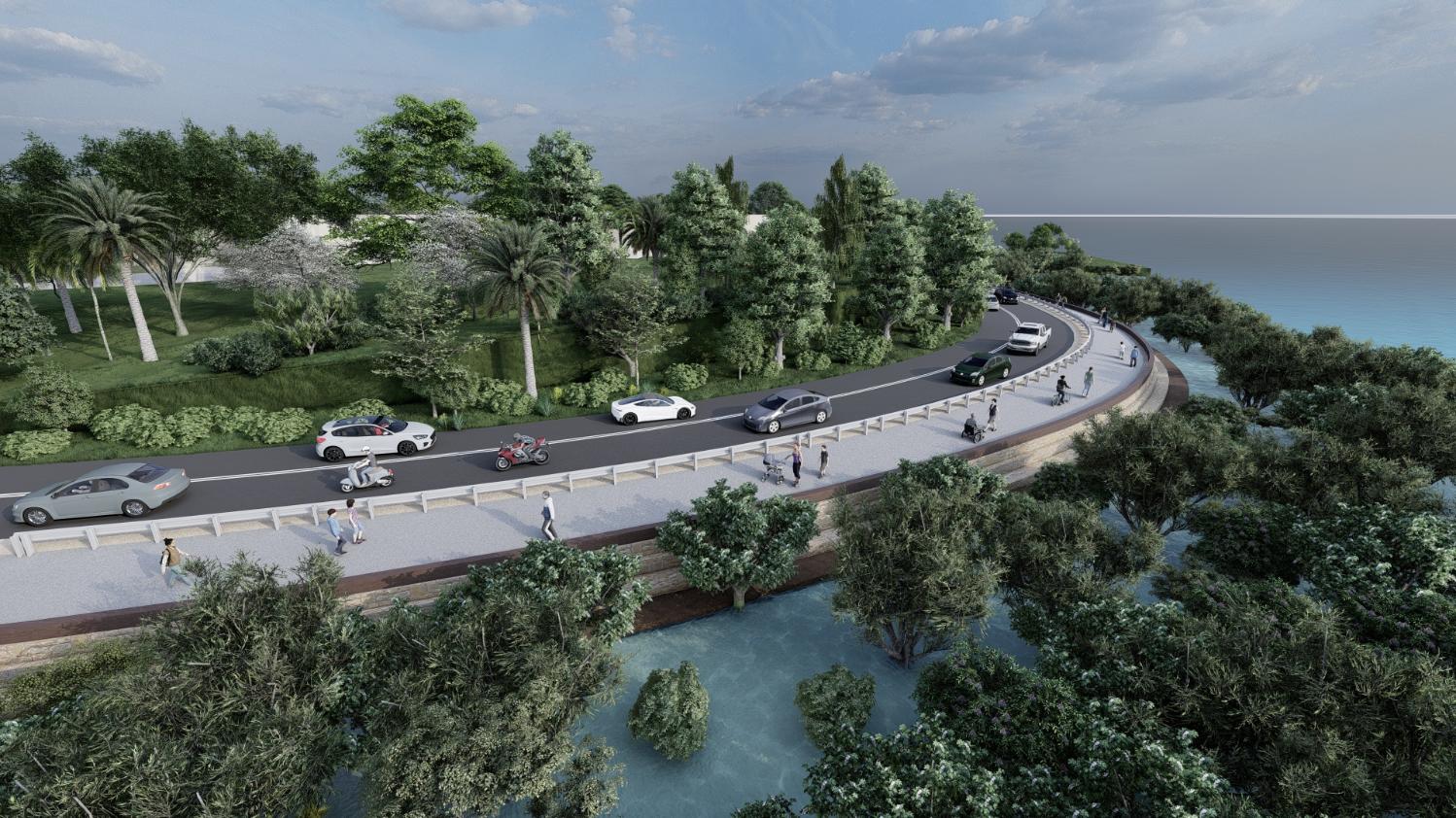 Artists' Impression of proposed works/concept. Image courtesy NBC
The footpath between the Bayview Sea Scouts Hall and Bayview Baths is a highly utilised foreshore connection that currently provides a poor level of service for the community. The path has been impacted by coastal erosion which has caused it to become uneven in places and difficult to traverse.
In June 2022 Council announced a new sandstone seawall will be constructed at Bayview to ensure the ongoing structural integrity of Pittwater Road and the foreshore pathway will be widened to increase pedestrian safety.

“Church Point is the gateway to Pittwater’s offshore communities and a beautiful location for walking, cycling and boating,” Mayor Regan said.

“Improvements to the pedestrian path, which is part of the popular walkway extending from Mona Vale to Church Point, will ensure the safety of all residents and visitors, while upgrades to the seawall will preserve the structural integrity of Pittwater Road.

Initially the plan was for widening the path along the foreshore from 900mm to 2100mm to minimise the impact on mangroves and potentially provide opportunities for greater habitat.

The $1.2 million project will have significant safety, connectivity and environmental benefits as well as remove existing hazards along the path and minimising the impact on mangroves.

This project has been allocated a $599k grant from the NSW Governments Metropolitan Greenspace Program and through funds allocated by Council.

Local Member for Pittwater Rob Stokes said in June the upgrades would help improve green open space along the foreshore.

“This is one of our community's most picturesque foreshore walking areas and this project will help make it safer and more accessible.

“There's been fantastic collaboration between the Community, Council and State Government and it’s great we’ve now secured the funds to progress the works.”

Council are planning to widen the concrete path and better protect the embankment it sits on from coastal erosion. The existing seawall will be upgraded to modern engineering standards which will protect the widened footpath and Pittwater Road from erosion.
The proposed seawall will be comprised of stepped sandstone blocks and sandstone rock toe protection, which will protect the bank and provide tidal habitat for fauna.
Artists' Impression of proposed works/concept. Image courtesy NBC
Council states that some mangroves will need to be removed to stabilise the bank. Mangrove seedling replanting will be undertaken at the end of construction with the aim to replant more than were present prior to the works.
In accordance with Part 5 of the Environmental Planning and Assessment Act 1979 (EP&A Act), a draft Review of Environmental Factors (REF) has been undertaken. The draft REF outlines potential impacts and mitigation actions for proposed works. The REF is available to view on the Your Say page.
One traffic lane will be closed for the duration of the works. Temporary traffic lights will provide a contra-flow arrangement along the affected section of Pittwater Road. Pedestrian access will be closed along this section of Pittwater Road during the works. An alternate route will be provided via Fermoy Ave, Roches Ave, and King Edward Avenue.
Access to the Sea Scout Hall and Bayview Tennis Courts will be maintained throughout the project. The work will not impact the Marina carpark or parking availability.
A construction contractor has not yet been engaged for the proposal and as such the exact construction methodology is unknown. However, an indicative construction methodology has been provided in the REF to inform the environmental impact assessment.
Key activities listed are:
Council's REF states the construction methodology would be confirmed during the detailed design and planning stage of the works before the engagement of the contactor.
A Construction Environmental Management Plan (CEMP) would be prepared for the works by the appointed contractor. The CEMP would document the mechanisms for achieving compliance with the commitments made in the REF.
Construction of the proposal would require the clearing of some vegetation within the proposal site to facilitate the removal and reconstruction of the existing seawall and footpath. It is anticipated that the proposal would require the removal of:
The removal of the Swamp Oak Forest would include some mature trees and foraging habitat resources.
The Draft REF states;

a five part Test of Significance under the BC Act was undertaken by Cardno in 2019 for the Swamp Oak Forest TEC, which determined that the removal of up to 0.03 hectares of Swamp Oak Forest is not considered to be significant to the local occurrence of the TEC within and surrounding the proposal site. As such, a Species Impact Statement or entry into the Biodiversity Offset Scheme would not be required for the proposal.

Council will be going to market to seek tenders for a suitable contractor to undertake the works. Construction is expected to occur between April and August 2023.
View the Design Plans and Draft REF HERE
Have your say
Council invite you to have your say on the detailed design plan by:
Comments close Wednesday November 30th.
All comments regarding this public document will be treated as public documents and made available on request.
Earlier report: Council To Revitalise Bayview Church Point Foreshore - Issue 543, June 2022 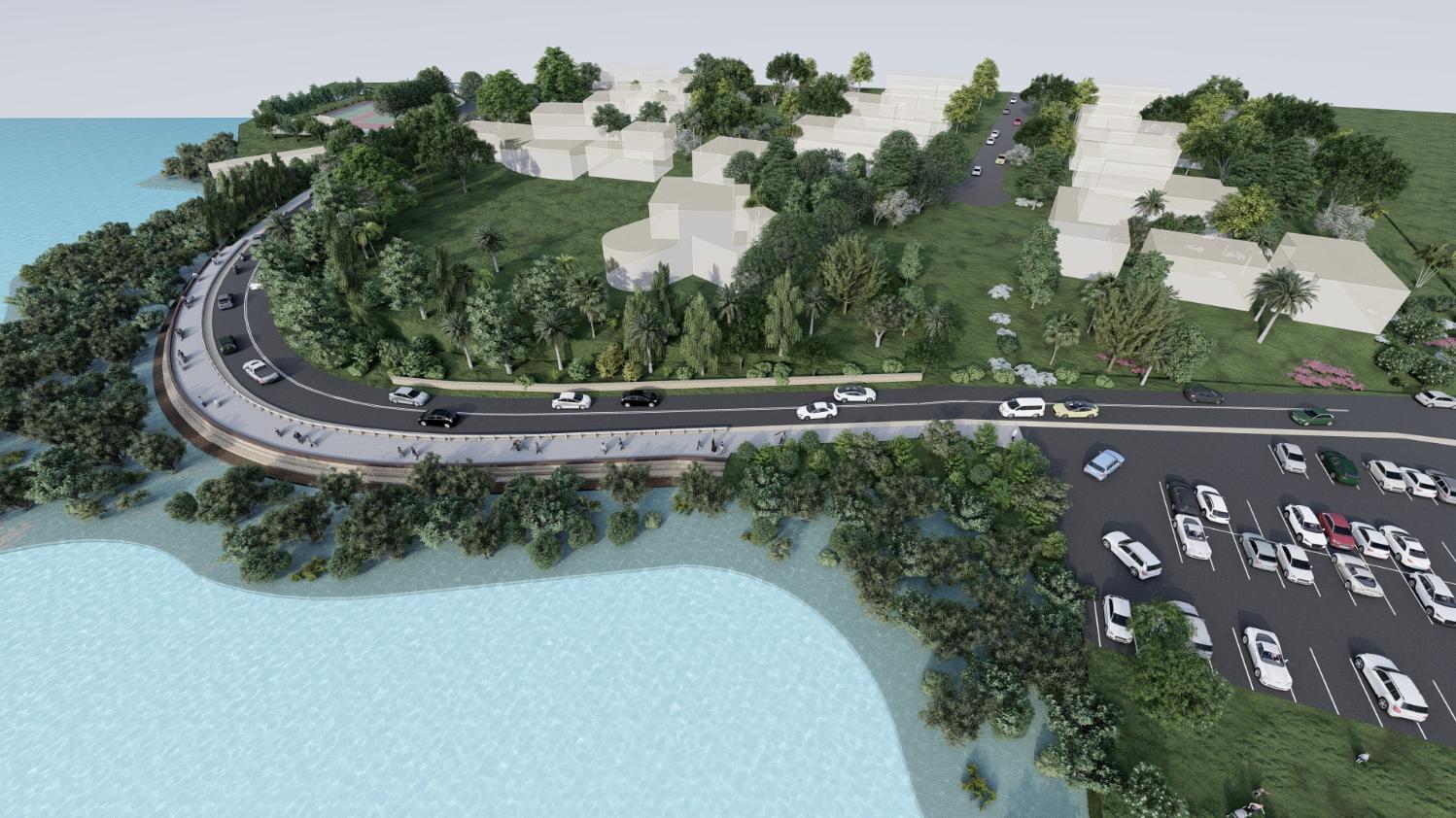