If you are thinking of a career in Nursing this Avalon Beach icon's story may be of interest. A wonderful lady, who has given since young and continues to invest her self in our community still.

Many thanks to Sue Martin for her 'journo' volunteer stint in finally getting this story in the records.

Until I was seven, we lived in Roseville. We then spent time in Camden before returning to Roseville. In 1940, my older sister, Margaret, and I were sent to live with an Aunt in Tamworth because of the fear of invasion.

However, the fear of invasion diminished and we returned home after only six months. This was somewhat premature in light of the invasions by the Japanese submarines in Sydney harbour in 1942.

I can’t really remember what we did for fun. There was no organised “fun” in those days. There was not the same focus on “play” and as children we definitely had jobs to do around the house. I can remember being taught to play mah-jong by my parents and we did enjoy playing mah-jong as a family. I still have the set. I can’t remember any playgrounds but in Roseville, people lived in houses with gardens. I suppose playgrounds are more important now as so many people live in flats or apartments.

We did play tennis, taught by our father, because there were lots of tennis courts in Roseville. I suppose most of them have now been replace d by houses and apartment blocks. We also enjoyed swimming at North Sydney pool.

I notice the noise. People seem to yell and of course there is much more traffic noise. We had a car but many people didn’t and certainly no house had more than one car which was kept in the garage, not left on the street which is what seems to happen now. Houses were smaller and there were no tall blocks of units. Roads didn’t seem as crowded. There wasn’t as much rushing about. Life seemed to be at a slower pace. People seemed to have time.

I went to school at Hornsby.

I can’t remember what I wanted to do because in those days, careers were not really taken seriously for girls. There was the assumption that you would get a job, any job, rather than a career, for a while. Then you would marry, have children and become a housewife. Of course, in many professions, women had to resign once they married. If they were allowed to continue working, they were paid less than their male counterparts doing the same job, as happened to my mother in teaching.

At age 15, I left school and, like most girls, went to a secretarial college. I then got a job with an architectural design firm doing office work. After a while, I decided I was not getting anywhere and decided to do nursing. I trained as a general nurse at Manly Hospital. That is where I understood why people were agitating for a hospital at Mona Vale. We nurses used to talk about all the DOAs, those sick people for whom Manly Hospital was too far away and they were dead on arrival at Manly Hospital.

We are now back to same situation as the government has virtually closed Mona Vale Hospital, with our closest hospital, now at Frenchs Forest. I strongly believe that a level 4 Mona Vale Hospital is necessary for the welfare of local community. I was happy to participate in the pop-up maternity unit on Wakehurst Parkway organised by the Save Mona Vale Hospital group to highlight the loss of a maternity unit at Mona Vale Hospital. My two visits to Northern Beaches hospital in recent months have certainly not reassured me that we can do without our local public hospital. 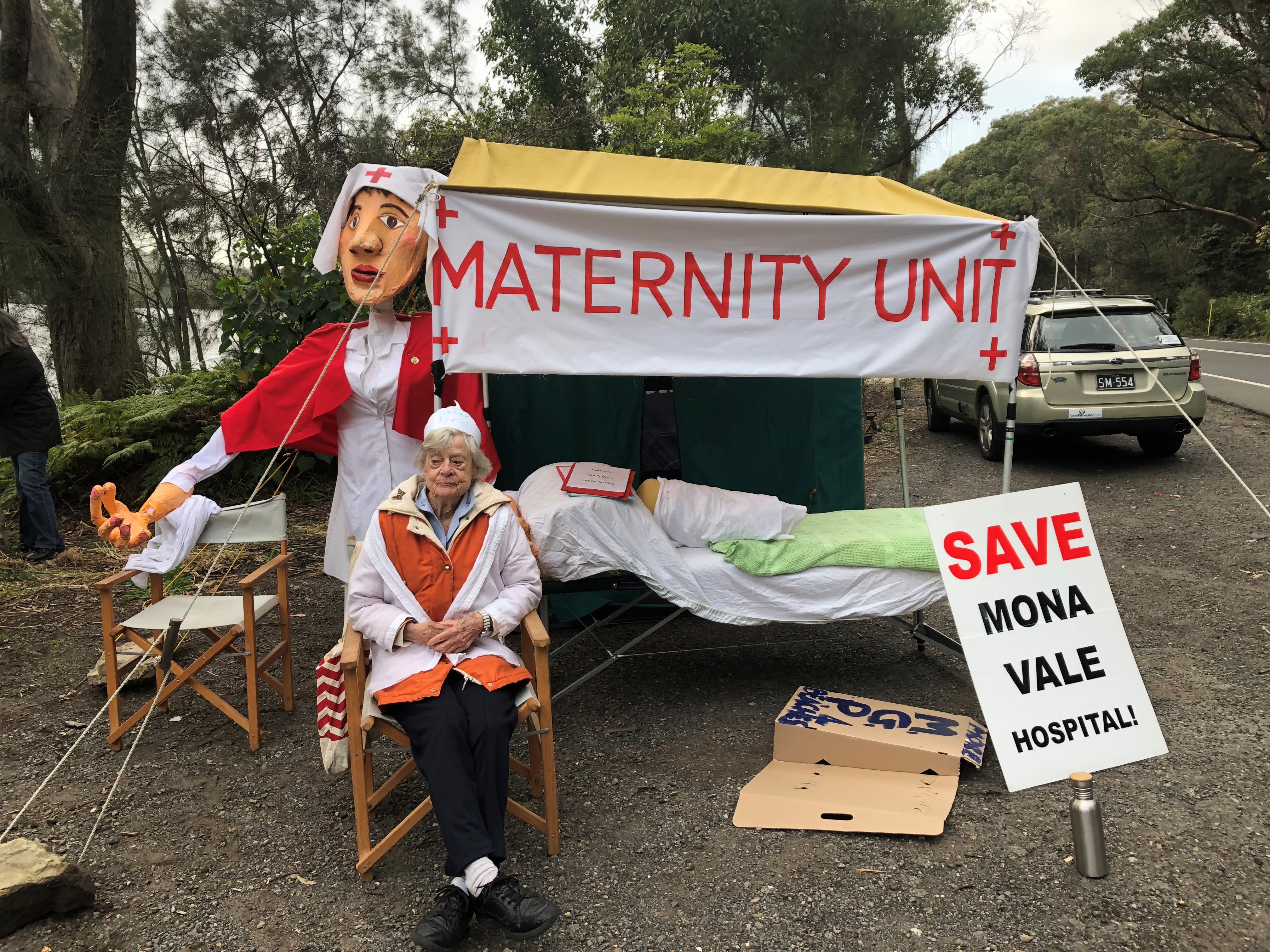 I then trained in midwifery at Crown Street Hospital. In 1957, I decided to try my luck in Europe and travelled by boat to London. That was the way you travelled to Europe then.

In London after a month’s trial, the Midwives Board registered me as a qualified English Midwife.

It was just as portrayed in Call the Midwife. We all made home visits on bicycles issued by the local health office. My bicycle was basically a death trap with no back wheel brake but two brakes on the front wheel! This meant the very real possibility of an emergency stop pitching me headlong over the top of the bike. When I appealed to the authorities I was allowed to take the bicycle to a bike repair shop, of which there were many as in those days more people had bikes than cars. Here, my bicycle was dated at about 1923, older than me. I nicknamed her Clarabelle after the daughter of the man who invented the penny farthing bicycle. Fortunately, they were able to put a brake on the back wheel as well.

After a while, I got itchy fear and contacted the International Federation of Nursing. They told me that with my qualifications I could nurse in Denmark, France and the U.S. As I could not speak French and did not want to travel to the United States, I chose Denmark and spent some time nursing in a Copenhagen hospital.

I got itchy feet again and left to work in a youth hostel in Norway.

I then returned to Australia in 1959. For a time, I worked for the Far West Home in north western New South Wales as a general nurse and baby health nurse. I was based at Inverell. Accommodation was quite basic, usually being a rented room with a hand basin if I was lucky in a local’s home. Fortunately, the Far West Home provided me with a car (rather than a bicycle!) for the many hundreds of kilometres I had to travel. In those days, safety was not considered to be an issue and I spent many long hours driving many miles from town to town on my own and renting fairly basic accommodation.

My next adventure was working on Cape York at the Presbyterian Inland Mission, First Aid post. Here, patients, many of them indigenous, came to me rather than me to them. The wonderful Flying Doctor Service came once a month.

I then returned to Sydney, as my parents were aging.

Nursing – what was the best part of this for you?

The best thing about nursing was that it gave you flexibility. I was able to find work as a nurse in so many difference places. I have always enjoyed travel and it meant I could travel to meet different people, and experience different cultures while doing something worthwhile.

I retired in 1982 and so have now been retired 39 years!!! This meant I was then able to indulge my love of travel even more with one memorable trip being across Asia with my sister.

Why is it important to you to contribute to our community?

For many years, and up until recently, I was a regular swimmer at Avalon Beach rock pool and enjoyed swimming and chatting with my friends in the swimming community.

I enjoy being a member of Probus because prior to Corona Virus it kept me active and aware of what was happening.

For a number of years, I volunteered at the Red Cross shop in Avalon and made some good friends through that.

I love Scotland Island, with its lovely walks. It seems remote but close by. I also like Palm Beach. It seems just such an open area with all the space and a great swimming pool.