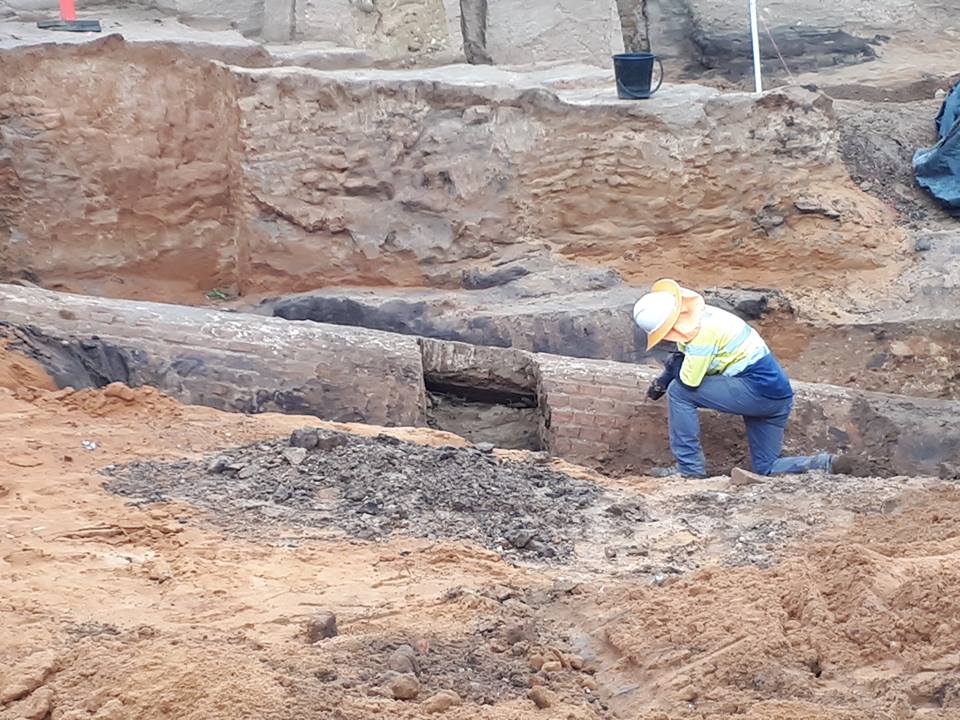 March 22nd, 2018 - "Work continues on brick barrel drain today. This is incredible 1814 infrastructure that Maquarie ordered to be built in 1814. Half of the cost of these drains were paid for with 350 gallons of the best quality Bengal rum. This will soon be covered with a high cement bridge." - photo and quote by Heritage Act below; taken Friday 23 March, 2018 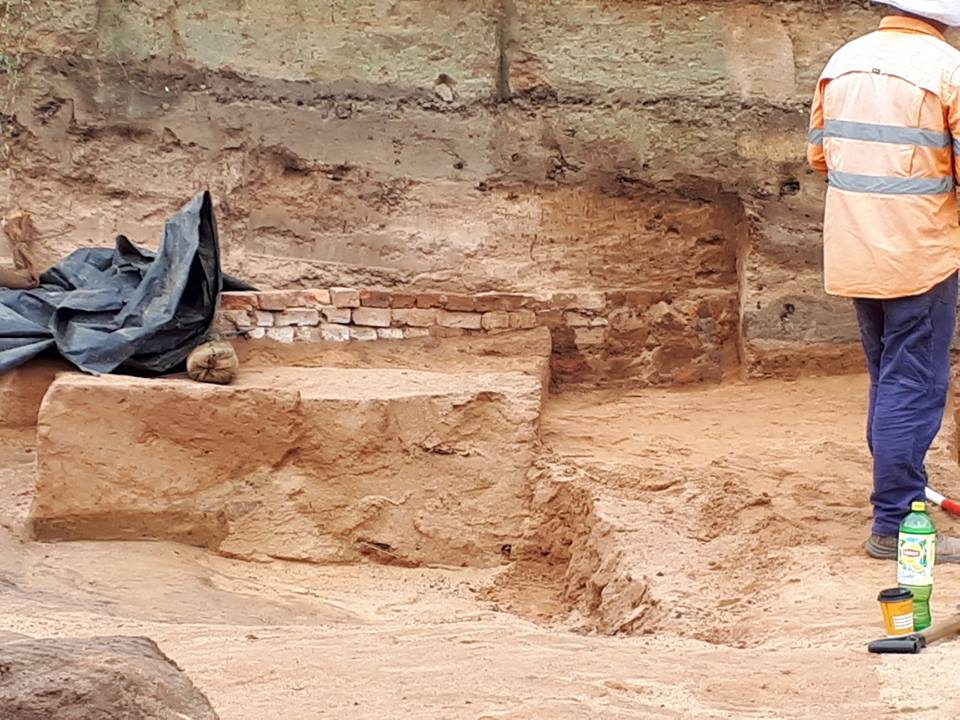 Below is an article written by historian Professor R. Ian Jack MA, PhD, FRHistS, FRAHS,  on the brick drains uncovered in Thompson Square.

Professor Jack has also authored many books, article and papers on heritage, particularly of the Hawkesbury and Macquarie’s Towns.

Please enjoy his article on the remarkable brick drains of Thompson Square.

Thompson Square in Windsor is recognised as having very high heritage values. Dating from 1795, it is the oldest civic square in Australia, the centre for government control and economic management in the newly settled area. Adjacent to the early farms which fed early colonial Sydney, its wharfage made it an important entrepôt at the head of Hawkesbury River navigation throughout the nineteenth century. It was named by Governor Macquarie in 1811 in memory of the first emancipist magistrate in Australia.

The heritage significance of Thompson Square has in 2018 been dramatically enhanced by the archaeological excavation of its early drainage system. What has been revealed under the surface in the lower part of the square is a complex and sophisticated series of brick drains which can be documented in an exceptionally detailed way. A contract for public works in the square, involving drainage, levelling and wharfage, was issued by Governor Macquarie in 1814 to two prominent, entrepreneurial Hawkesbury men, John Howe (who was the chief constable) and James McGrath. This original document and a related contract made in April 1815, both signed by Macquarie himself, were retained by the Howe family and are now in the State Library of New South Wales.

On 8 August 1814 Howe and McGrath agreed to complete three separate commissions within twelve months. One of these was:

This plan has not been located, but it is clear from local knowledge and confirmed by the current excavations that in 1814 Howe and McGrath elected to build a single central drain, with ancillary channels. The governor permitted the contractors to manufacture between 120,000 and 150,000 bricks 'on the Brick Ground now making at Windsor for Government’. Since bricks were not relevant to the other works in the contract, this substantial number was earmarked for the drains.

By 24 April 1815, the date of the second contract, well ahead of schedule, both the new wharf and the barrel drain had been completed. The new contract gives details of the remaining work. This was the very large enterprise of extending the wharf and reducing the steep angle of the square as it dropped down from George Street to the river.

It is this levelling of Thompson Square which explains why the barrel drain was found no less than 3.5 metres under the present surface. It also offers a satisfying interpretation of the archaeologists’ discovery of a series of brick-lined sump-walls going vertically up some two metres from the barrel drain to a brick box drain on the surface. The nature of the bricks found in all three strata is consistent with a Macquarie-period date.

Levelling the square was a substantial operation. Although only six months were allowed for completion, the fee was almost double that for stage 1 in 1814-1815 (£600 against £350, plus spirits in each case). The magnitude of the task was recognized by Macquarie, who added to Howe’s copy of the contract a note in his own handwriting, allowing the starting-date for the six months to be postponed for two months until 24 June 1815.

The methods to be used by Howe and McGrath were carefully specified. A new wooden ‘Wharf or Platform’ was to be created along the whole length of the riverside part of the square ‘in a line with the present Jetty or Wharf but three feet higher [than the deck of the wharf]’. There were to be three rows of piles, 550 in all, to support the new structure. The improved wharf was 276 feet long and 33 feet wide, according to the Sydney Gazette, whereas the first Howe wharf was only 50 by 18 feet. The piles on the landward side, taking the full weight of the infill, which was to reach the top of the new wharf, were to be:

well secured with Land Ties and Caps and planked with sound two inch Planks and not more than six inches wide to be spiked with five inch spikes.

It was envisaged that 5,000 such spikes would be needed from government stores. Although the dimensions of the vertical piles were not specified in 1815, the earlier contract had stipulated that each pile should measure between 16 and 18 inches and that the piles should be placed from three to four feet apart. Standing at least three feet above the land-surface, the reinforced landward side of the wharf was a substantial buffer for the weight of the fill required to diminish the slope.

Obviously the greatest quantity of fill would be required in the lower part of the square. Howe had already in 1814 and early in 1815 built the large barrel drain just below the original surface. To maintain an efficient drainage system, as the barrel drain was to be covered with a great deal of fill, an additional drainage channel on the surface would be necessary, connected to the barrel drain by a series of brick-lined sumps. The box drain now excavated was therefore added by Howe once the land-fill had altered the landscape of the square, particularly the part closer to the river. Further minor brick drains running to the surface box drain have been identified by the archaeologists.

These are the ‘Channels’ stipulated in 1814 but first constructed only after the initial levelling of the square was complete in 1815.

all the planking is carried away and there is no part of the wharf that can be built on again.

The 1816 flood would have implications for the new landfill and for the new surface drains. Under the direction of Francis Greenway, Howe and McGrath constructed a third wharf between 1816 and 1820 and it is probable that replacement infill, new box drains and new side-channels were required, with further repairs likely after the 14-metre flood of February 1817 and the 12-metre flood of March 1819 which postponed completion of the new wharf. Howe and McGrath received their final payment for ‘filling in Thompson Square and Erecting a Sewer and laying drains’ only on 15 February 1820.

Since 1820, there have, of course, been further changes in the topography and soils of Thompson Square through recurrent floods, the creation of road cuttings to reach Windsor Bridge after 1874 and various uses of the open parts of the square. These have affected the context of the drains, but they do not affect the interpretation.

The very precise terms of the contracts make the conclusion inescapable that both the barrel drain and the box drain were conceived and built between 1814 and 1820 as a striking realisation of challenging commissions to two local entrepreneurs.

What has been partially uncovered in Thompson Square early in 2018 should be understood as remarkable physical evidence of a complex drainage and land-fill system conceived under Governor Macquarie in 1814 and completed by 1820 through the energy of John Howe and James McGrath. This is the earliest public works of its sort surviving in the colony and the barrel drain is the key element in the sophisticated water management system. There is an overwhelming case for conservation, preservation and display.

Some more wonderful photos from Neil Dand showing the drains after having been cleared out. March 13, 2018

Renowned archaeologist Edward Higginbotham recently wrote; "The issue with the brick barrel drain at Thompson Square, Windsor is not only its significance, but that it is likely connected to the sites of many of the historical buildings that surrounded the square at a similar date, particularly the Commissariat Store".

The above article is shared courtesy of Community Action for Windsor Bridge (CAWB). The State Government and RMS want to demolish the existing, historic Windsor Bridge, and build new three lane bridge in its place - two lanes southbound, one lane northbound. This new bridge will have a high, wide concrete approach road built through Thompson Square, Australia’s oldest public space. (Option 1). The group is fighting to retain the existing bridge and to have a bypass built to take the bulk of the traffic away from the historic town centre.

CAWB is a grassroots organisation based in Windsor NSW, the third oldest settlement in Australia. We are dedicated to fighting for the most progressive infrastructure solution for Windsor and the Hawkesbury. The current plan by the RMS, known as Option 1, would see the demolition of the historic Windsor Bridge, the construction of a three lane replacement, and a major, arterial road bulldozed through Thompson Square, Australia’s oldest public space. Not only would this proposal be destructive to the unique and fragile heritage of an important part of our nation's history, it would also prove to be an ineffective solution to the ever increasing demands of road users.

Find out more by visiting: www.cawb.com.au

Roads and Maritime Services is continuing to work with heritage experts to determine the best way to interpret and document the brick barrel drain in Thompson Square.

A spokesperson said Roads and Maritime recently confirmed the brick barrel drain will remain in place in Thompson Square, with a design developed to protect the heritage find.

“The NSW Government understands the historic importance of the drain and intends to preserve and protect the drain by leaving it in place and building around it,” the spokesperson said.

“The drain is located close to where the southern approach of the new bridge will sit and Roads and Maritime is adjusting the retaining wall design in this area to ensure the brick barrel drain is not affected.

“Roads and Maritime has worked closely with the specialist archaeologists to determine if the brick barrel drain site can be left open for the community to view.”

The spokesperson said while this option has been considered, experts in heritage conservation have advised the drain has likely been buried for more than 150 years and believe the drain would further erode and deteriorate if left open to the weather conditions.

“A 10 metre section of the drain will also remain buried in the existing parkland of Thompson Square, which could be uncovered and studied if further heritage review is required in the future,” the spokesperson said.

“Archaeologists are continuing to analyse, date and catalogue the drain to ensure the history of the region is recorded.

“While Roads and Maritime works closely with heritage experts to ensure the find is documented for future generations, the community is welcome to provide comments by 2 April about possible heritage interpretation options.”

The spokesperson said specialist archaeologists are also continuing to carry out investigations to minimise any potential impact to Aboriginal artefacts.

“Aboriginal stakeholders are continuing to participate in the salvage work on site to assist with the identification and impact to Aboriginal artefacts,” the spokesperson said.

“There are a number of different options for the items of significance which are uncovered including traditional reburial, donating the artefacts to a museum or other culturally appropriate options.”

“The community is thanked for its ongoing interest in the Windsor Bridge replacement project and will continue to be kept informed as the project progresses.”

Comments about possible heritage interpretation options can be provided in writing to windsor_bridge@rms.nsw.gov.au.

To keep up to date with the Windsor Bridge replacement project visit rms.nsw.gov.au/windsorbridge. 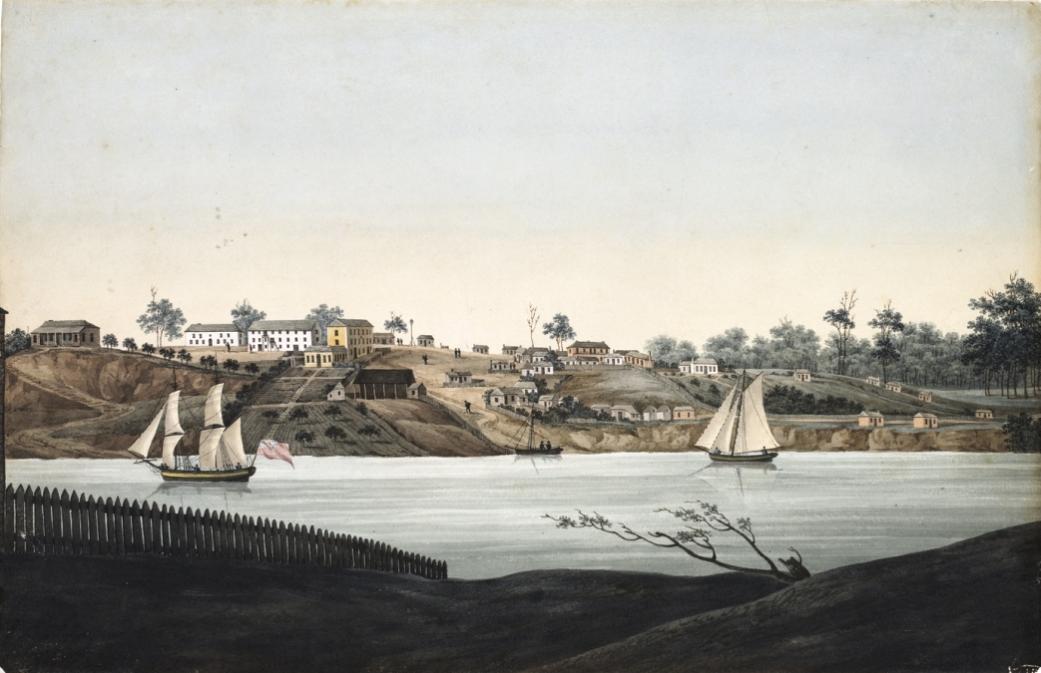