Community Rally Against Seismic Testing Off Newcastle States: 'No gasfield off Newcastle and the Central Coast!' 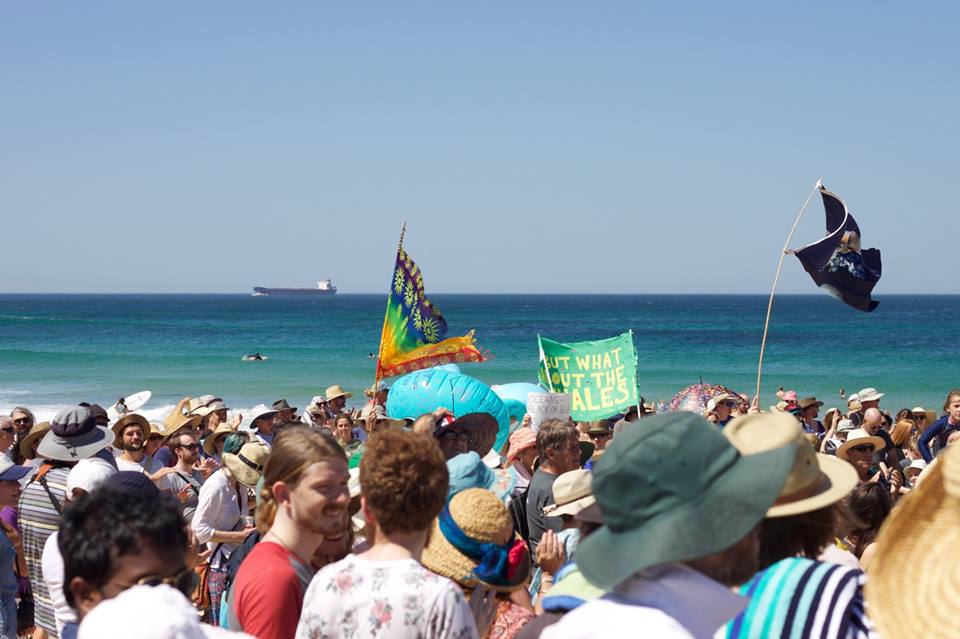 At Nobby’s Beach Newcastle, Sunday March 18th. Photo by and courtesy of Kieran Rezevsky
Over 500 people gathered last Sunday, March 18th to voice their dismay at Asset Energy’s approval to conduct the underwater acoustic testing in the coastal waters off Newcastle.

According to the NOPSEMA webpage the testing will commence on April 9th, 2018. Asset Energy was given approval by the National Offshore Petroleum Safety and Environmental Management Authority (NOPSEMA) in January to conduct testing, which involves sending repetitive sonic blasts into the ocean floor to identify natural gas deposits.

Opponents to the testing cite previous seismic tests being the cause of a reduction in fish life in fisheries in the same area that took years to recover from, not only damaging all in the sea but those who rely upon it for a livelihood.

Seismic and drilling operations have previously been undertaken by Asset Energy in PEP‐11 in the vicinity of the proposed survey area. The most recent offshore drilling campaign was in 2010.

“What we know about seismic testing, is that it has an incredibly negative affect for the environment,” Greenpeace’s Simon Black said.

“There is evidence that it can cause massive damage to not just fish, but also to the bottom of the marine food pyramid. It destroys the ecosystem right from the very bottom to the the very top – from plankton to whales.”

The Professional Fishermen’s Association have also expressed concern that seismic testing could have a detrimental impact on aquatic life in and around the test site.

In February, Newcastle City Council voted unanimously to oppose offshore testing. At State level, the NSW Resources Minister Don Harwin recently  voiced his opposition to the project in state parliament, saying the state was powerless to revoke the approval without Commonwealth backing.

Mr Harwin said the testing was “ill conceived” and the state was opposed to extending the survey for reasons including “very significant issues in relation to marine life”.

When seismic tests are to place to determine whether what they are seeking is present, only stakeholders may comment. This is limited to providing feedback on the environment, times proposed to do the tests (eg; originally these were slated to be run during whale migrations) or if this will affect another industry in the vicinity (fishers). How the tests may affect what lives in the waters does not come into consideration.

In recent years a spate of 'studies' commissioned by offshore mining companies have stated this does not affect fish life or whales. Other studies, not commissioned and paid for by proponents, have found the opposite.

If Asset decide to go ahead then the next stage does involved being able to provide public comment and submissions.

For all offshore projects, a proponent (the company proposing the project) is required to submit an offshore project proposal (OPP) to NOPSEMA for approval. The OPP process involves NOPSEMA’s assessment of the potential environmental impacts and risks of petroleum activities conducted over the life of an offshore project. The process includes a public comment period prior to approval and requires a proponent to ensure environmental impacts and risks will be managed to acceptable levels. Following approval, as 'following approval' seems to be the norm whatever public feedback or the risks and by-products and effects on all else in the aquatic environment may be, the proponents still require environment plan(s) to be assessed and approved by NOPSEMA before activities can commence.

The Rally attendees formed the shape of a dolphin on sand at Nobbys, one of the resident aquatic mammals expected to be in the seismic test zone.

It's "incredibly destructive" on the whole ecosystem, the rally organiser said.

"The federal government has imposed this blasting on our community without proper community consultation despite protests from NSW Resources Minister Don Harwin, despite unanimous objection from our council, and despite growing evidence of the dangers of seismic testing," said Ms Deen.

In the exploration for oil or gas, seismic testing involves blasts of air being fired every few seconds 24 hours a day for three to four days during that period. Air guns will also be employed to apparently deter any surface birds or mamals away from the area. The area is home to 22 threatened species, 23 migratory species and 32 whale species, according to the seismic survey environment plan.

While the annual whale migration officially begins on June 1, whales can be seen off the coast as early as the second week of May, Greenpeace Australia Pacific senior campaigner Nathaniel Pelle has previously told AAP. Sometimes they come north even earlier.

"Whale sightings off the coast of Sydney are an almost daily occurrence from the second week of May meaning there's a high likelihood that seismic testing could impact these much-loved creatures if it goes ahead at the end of the approved window," Mr Pelle said in a statement.

Petition: No gasfield off Newcastle and the Central Coast! (Wilderness Society).

Learn about the impact of noise on sea lifeand how it effects us all in the long term. Seismic testing for gas is about to commence off our coastline here and its development could have profound consequences.

This is an extremely important topic, the science of which is only just becoming known.

This is especially relevant as Living Ocean has been at the forefront of raising awareness regarding seismic testing scheduled just offshore here in the SEP 11 region off the northern beaches up to Newcastle.

Knowledge is the key to change.

"We value a Living Ocean"

Please indicate your intention to attend here so we can accommodate.

Sonic Sea ( http://www.sonicsea.org ) is a 60-minute documentary about the impact of industrial and military ocean noise on whales and other marine life. It tells the story of a former U.S. Navy officer who solved a tragic mystery and changed forever the way we understand our impact on the ocean.

Sonic Sea was produced by the Natural Resources Defense Council (NRDC) and Imaginary Forces in association with the International Fund for Animal Welfare (IFAW) and Diamond Docs.

(The survey comprises 46 2D lines of total length 208km.) -
NOPSEMA 'Not reasonably satisfied – opportunity to modify EP'
Decision date: 03/08/2017
Titleholder action Resubmission due date 3: 02/09/2017
Extension of timeframe: 17/08/2017 Titleholder action: 15/10/2017
Extension of timeframe: 05/10/2017 Titleholder action: 31/10/2017
Resubmission of EP: 31/10/2017 NOPSEMA decision: 30/11/2017
Request for further information: 30/11/2017 Titleholder action: 21/12/2017
Acceptance of EP: 10/01/2018 Titleholder action: 20/01/2018Decision notification (PDF 707 KB)
Submission of EP summary 19/01/2018 NOPSEMA decision 29/01/2018
Publication of EP summary 16/02/2018 - (not published/available at this date or yet - 25/2/2018)
Activity started 09/04/2018
NOPSEMA page: Baleen 2D HR Seismic Survey: Asset Energy Pty Ltd - also: Decision notification (PDF 137 KB)
From Decision notification:
Basis of decision
NOPSEMA has assessed the environment plan in accordance with its assessment policies and procedures.
On completion of assessment, NOPSEMA has decided that it is not reasonably satisfied that the environment plan meets the criteria below as set out in regulation 10A of the Environment Regulations:
(a) is appropriate for the nature and scale of the activity
(b) demonstrates that the environmental impacts and risks of the activity will be reduced to as low as reasonably practicable
(c) demonstrates that the environmental impacts and risks of the activity will be of an acceptable level
(d) provides for appropriate environmental performance outcomes, environmental performance standards and measurement criteria
(e) includes an appropriate implementation strategy and monitoring, recording and reporting arrangements
(g) demonstrates that:
(i) the titleholder has carried out the consultations required by Division 2.2A
(ii) the measures (if any) that the titleholder has adopted, or proposes to adopt, because of the consultations are appropriate
Titleholder requirements
For OMR decision In accordance with regulation 10, the titleholder is required to modify and resubmit the environment plan. Upon resubmission of the plan, NOPSEMA will continue to assess the submission in
accordance with its assessment policies and make a decision under regulation 10. After a titleholder has been provided with reasonable opportunity to modify and resubmit an environment plan, NOPSEMA will
make a final decision on whether to accept or refuse to accept the environment plan.
National Offshore Petroleum Safety and Environmental Management Authority (NOPSEMA) regulates all offshore areas in Commonwealth waters, which comprise those areas beyond the first three nautical miles of the territorial sea. This includes the Ashmore and Cartier offshore territories and offshore areas adjacent to all states and the Northern Territory.
NOPSEMA also regulates all offshore areas in coastal waters where a state or territory has conferred regulatory powers and functions. In jurisdictions where powers to regulate are not conferred, regulatory responsibilities remain with the relevant state or territory. 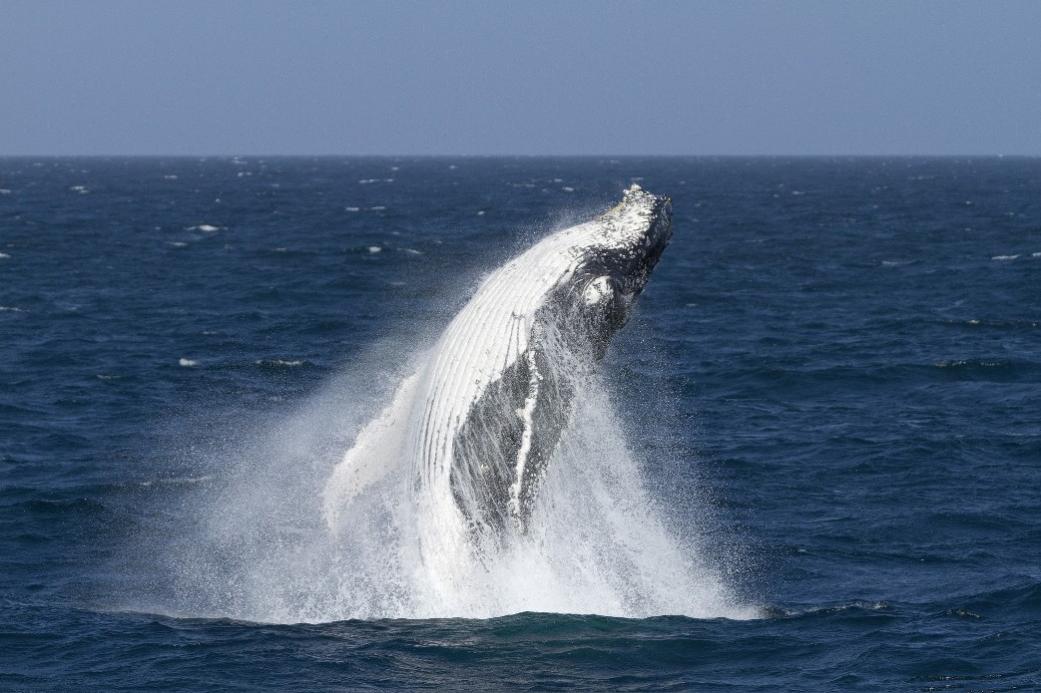