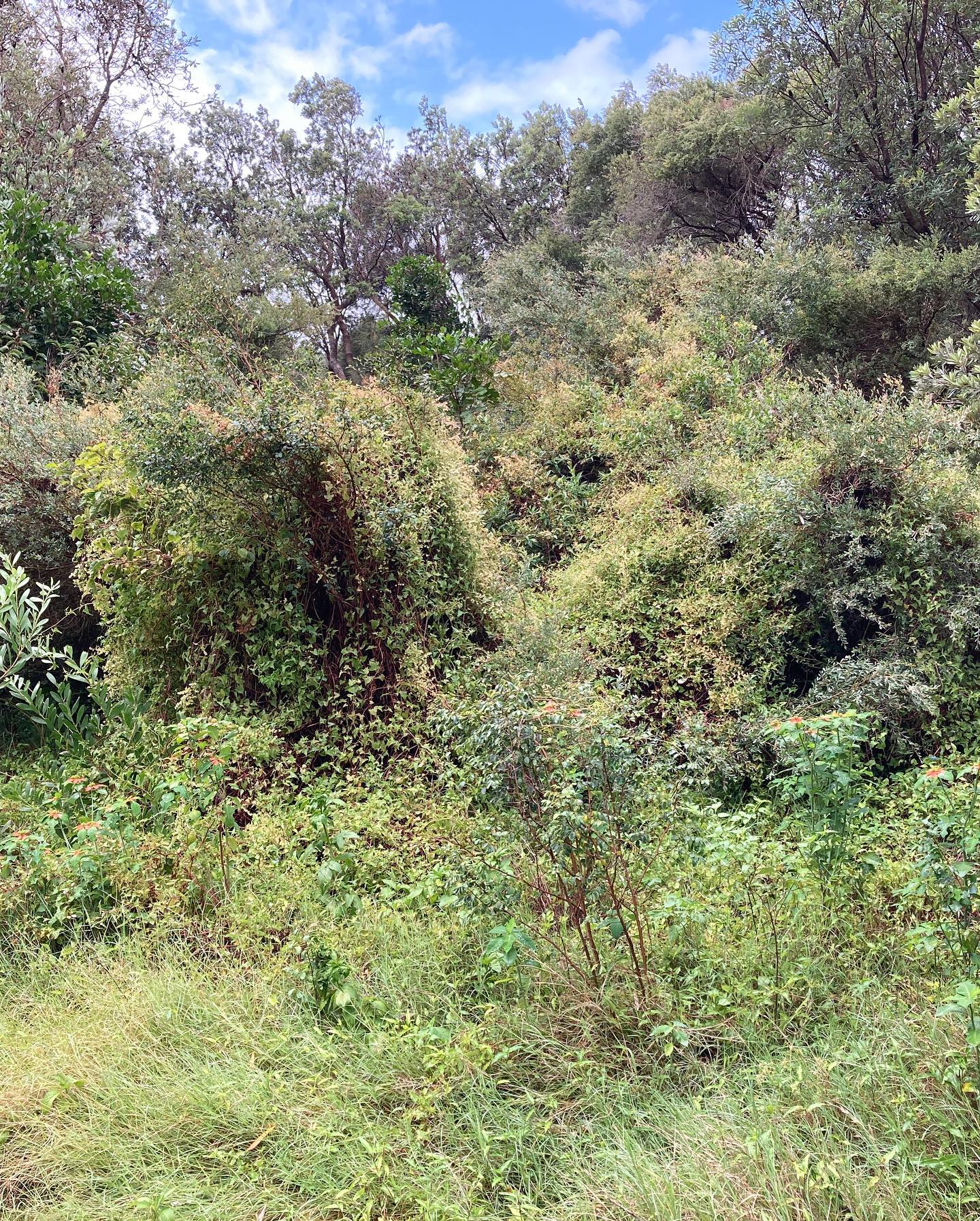 The weeds running rampant in Governor Phillip Park and those at Bangalley Headland Reserve have missed out on much needed funding, announced Tuesday, February 8th.

The NSW Government has stated it will invest $15.23 million from the Crown Reserves Improvement Fund in more than 250 projects to maintain and upgrade Crown land reserves and community facilities across the state.

“The NSW Government knows how important it is that we keep Crown reserves in top shape in order to support the communities that rely on these facilities. In doing so we are also protecting the environment and supporting tourism, business, and local economies,” Mr Anderson said.

“The Crown Reserves Improvement Fund supports projects in all areas of the state, particularly in regional NSW where we know communities make great use of facilities on Crown Land.”

“It will also keep our reserves healthy and protect native plants and animals by removing noxious weeds and controlling feral pests like foxes, rabbits and cats.”

The funding allocated to council has been announced in the summary of the 2021-22 successful applicants. Overall 109 locations and $2,653,802 has been allocated to weed removal and control.

Of this $198,859 was allocated to the local council for weed control.

These grants are given on the basis of these being Crown Lands and are provided by the state government.  Readers can access the full list of the 2021-22 successful applicants

As run in the Environment page last week, and since putting up a post listing the funding allocations on one of the Pittwater Online News social media platforms, Residents across the Local Government Area have contacted the magazine stating grass is overgrown in their local reserves and parks(grass is 50-75cm high in many local reserves, covering benches) and has been so for for months and for years in some cases.

The Council is also limited in what funds it can apply for to address the problem, should it be short of funds for maintenance, as all announcements coming out of the federal government are about protecting rural areas and agriculture or must target specific new weeds rather than the ones still prevalent.

The Delivery Program 2021-2025 and Operational Plan and Budget 2021/22 is not delivering good results. With so much money allocated in the Capital Projects for new Parks and Recreation works going outside of Pittwater, Council needs to review its budgeting priorities.

One email received this week on weeds in the Warriewood Valley reads:

I am writing to you as a very concerned citizen and long-term ratepayer. My concern is the overwhelming infestation of weeds throughout the Northern Beaches, but especially in the Warriewood Valley. We have lived in this once beautiful valley for 45 years and have never seen the weeds so rampant... choking waterways and native plants with their prolific growth. Every creek and settlement pond is now so full of Ludwigia, Parrot Feather, Azolla, Duckweed, etc, that they leave little room for the once prolific wildlife, especially the waterbirds. Along some creeklines the smell of de-oxygenated, rotting ponds is now unavoidable, with only a handful of waterfowl able to survive.

And beside the creeks the bushland is faring no better... mature banksias and other shrubs - and even large trees - are now so covered with Morning Glory or Madeira Vine that they are dying a slow death, and the ground itself is blanketed with Tradescantia, inhibiting any hope of native seedling survival.

Before the amalgamation, Pittwater Council appeared to be much more environmentally aware, willing to spend real money and effort on keeping the weeds at bay. In those days we would often encounter gangs of Council workers, many of them on hands and knees, pulling weeds out before they could gain hold. Ever since the amalgamation we rarely see any Council-sponsored weed control, with the result being that it has now gotten well-and-truly out of hand... and it will take a massive operation to bring it back to a controllable state.

So, I am asking Council to undertake that "massive operation". If you don't do this now we will have lost forever a once-valuable and unique slice of Australian bushland... and the animals that depend on it. I would offer to guide your officers to the worst areas of weed infestation, but it is bad throughout the valley, especially along the creeklines.

There are quite a few others, citing weed encroachment in all areas and all suburbs across Pittwater.

Currently the council's Community Strategic Plan is open for comment.

Our bushland, coast and waterways are protected to ensure safe and sustainable use for present and future generations Strategies

a: Protect and restore local biodiversity and bushland

b: Protect and improve ecological conditions in catchments, creeks and lagoons

c: Protect and manage the condition and safe access to the coast, lagoons, Middle Harbour, and Pittwater

d: Provide sustainable access to the natural environment, while recognising and protecting its cultural and heritage value.

Unfortunately the images below, along with peoples experience across Pittwater since May 2016, would make anyone think the above is just spin and a tick a box document produced to keep on legitimising the indefensible when so much clearly evident destruction of our environment is occurring unchecked.
This is the drop between ridges at Palm Beach dunes and Governor Phillip Park area on the Pittwater side - this area is now covered in weeds, has been for well over 12 months, to the point where the weeds are now strangling, to death, long established trees: 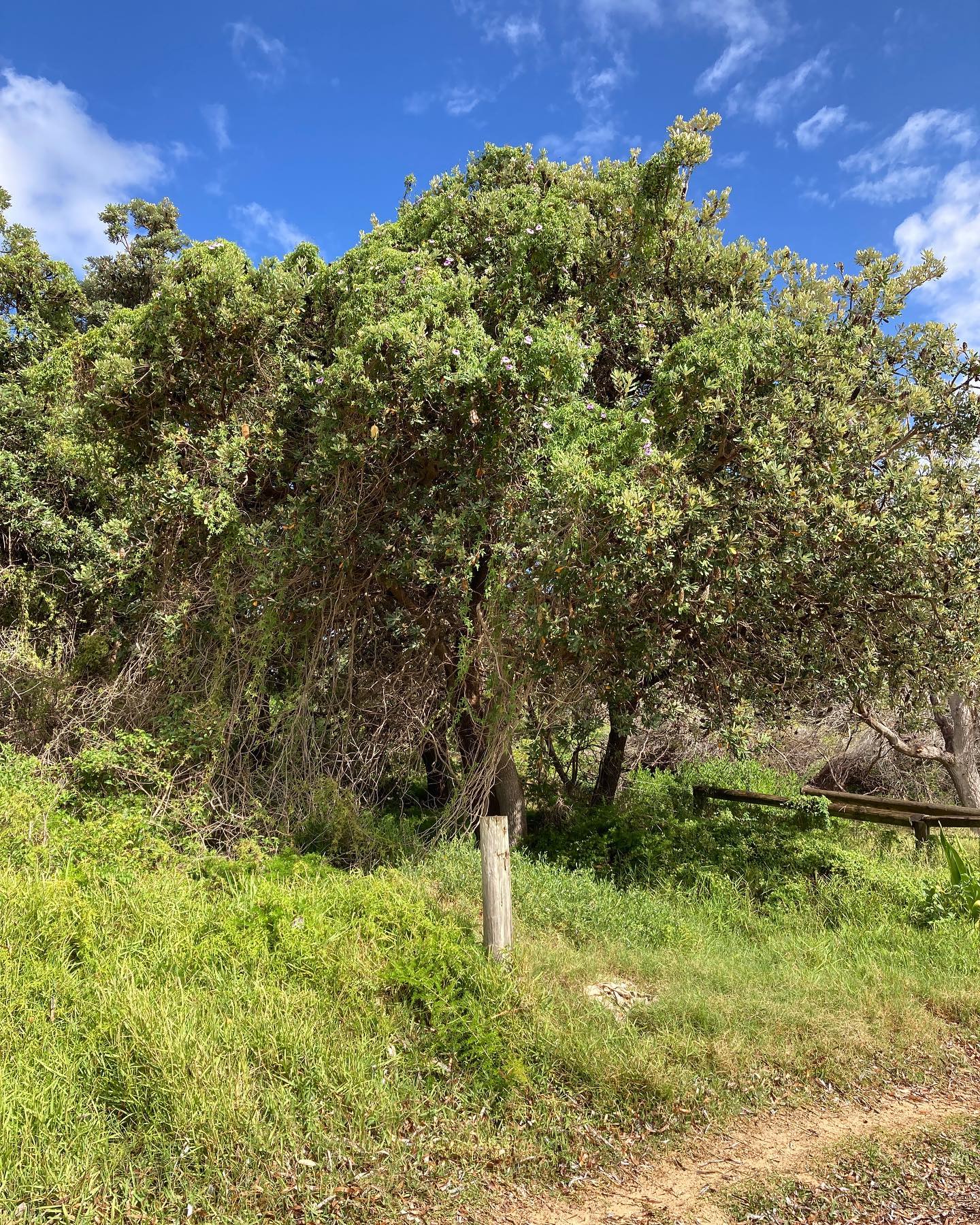 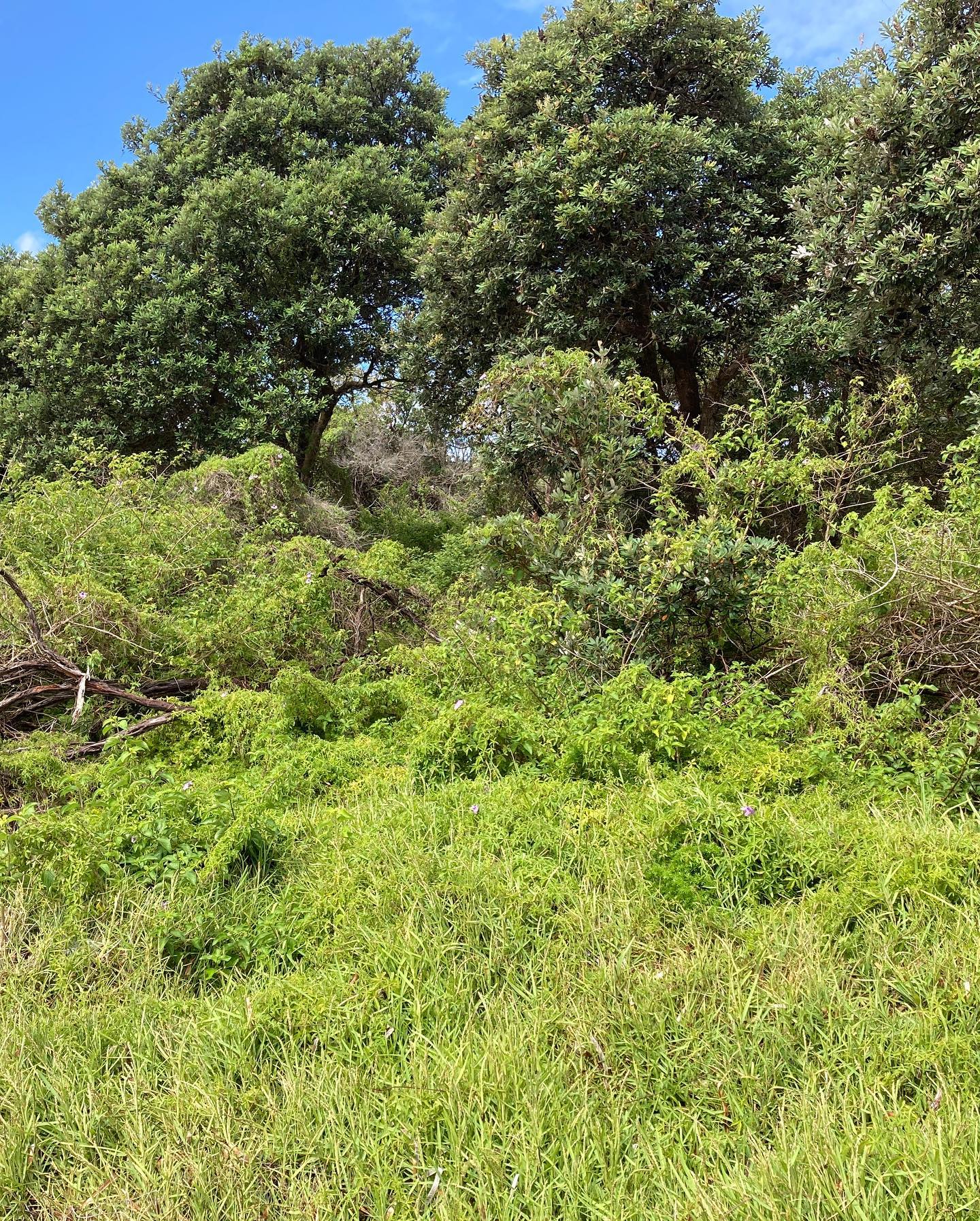 These older banksias and tea trees need to be able to have seedling offspring to replace them and keep the coastal vegetation healthy.
At the Whale Beach Rd track entrance to Bangalley Headland weeds have overrun the bush. This is too much for the volunteer bushcare group to manage and it has been stated there is not enough funding from Northern Beaches Council for the contract bush regeneration team: 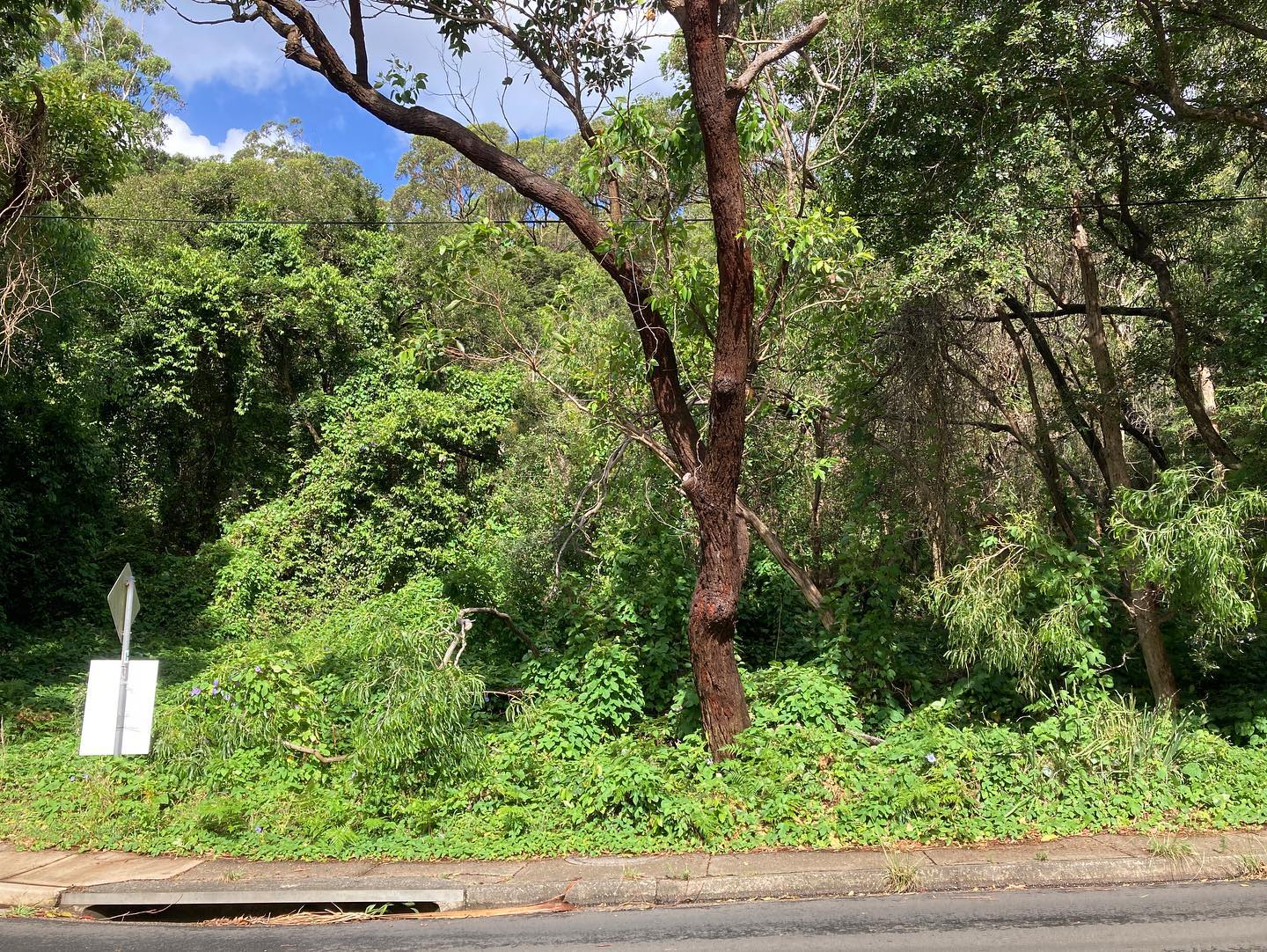 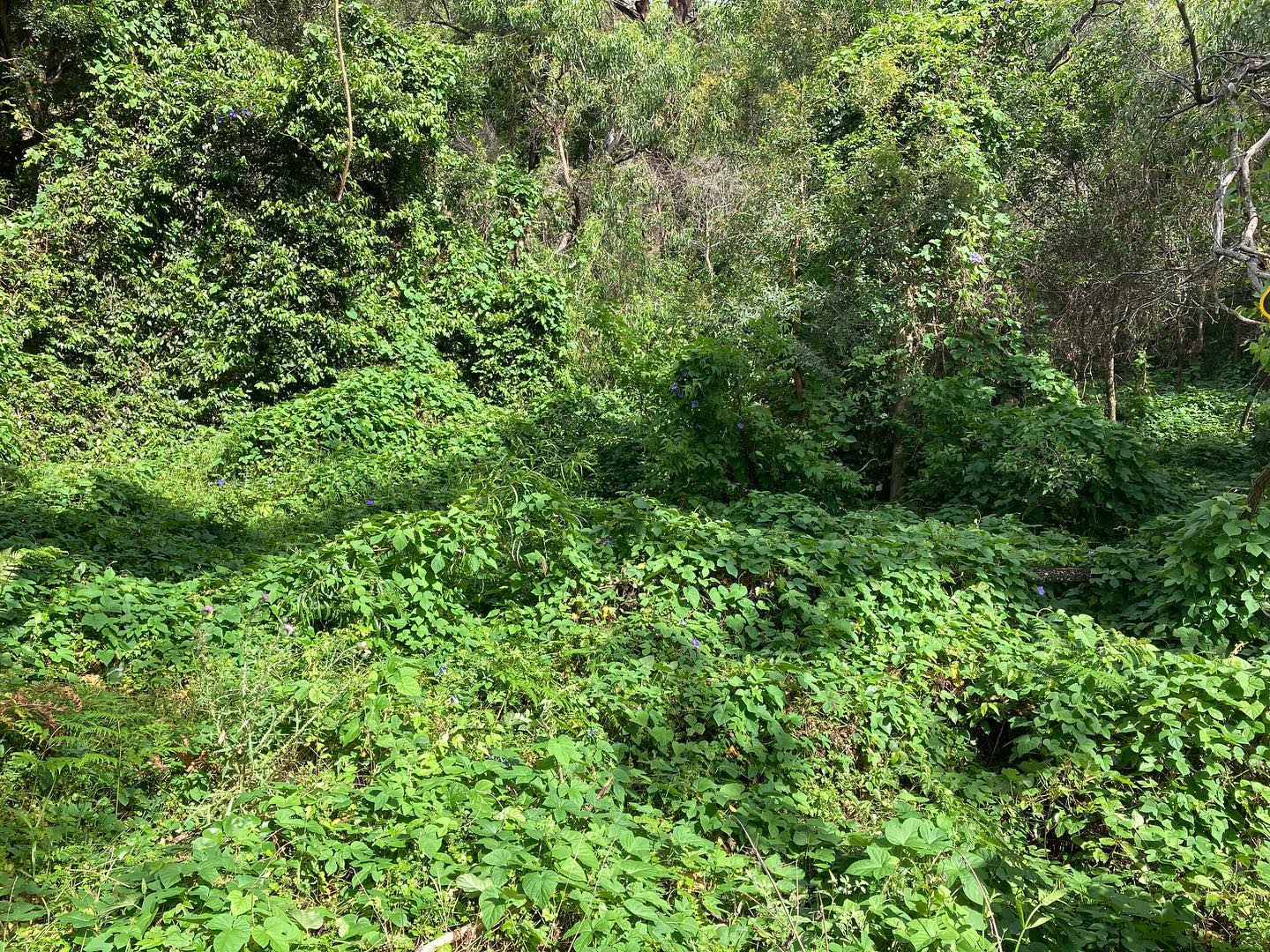 Part of this problem is the council's roster schedules allocates only so many mows of each park each year and with so much rain and humid conditions lately, the grass grows quickly. Playing fields such as Rat Park or Careel Bay have been getting mowed regularly but these smaller reserves, playgrounds and parks have not had their mowing schedule adjusted.
Although the council undertakes a scheduled maintenance program to control weeds in high use areas, including foreshore parks, and on sportsfields, those photographed 12 and 24 months ago at Palm Beach have not been targeted and have spread.
The council undertakes seasonal weed control in turf on sportsfields and some high use reserves using pesticides. Spraying programs are subject to weather delays.
Council's webpage on their spraying program for areas across the LGA in July-September 2021 is listed at: things-to-do/sports-and-recreation/spraying-program
Only Casper, used for post-emergence control of broadleaf weeds in established turf, was scheduled for Governor Phillip Park.
The council, as a local control authority, has the following functions under the Biosecurity Act 2015;
The Biosecurity Act 2015 also requires Council to appoint authorised officers to exercise its functions under the Act.
Residents can report weeds in the areas the council is responsible for to: https://help.northernbeaches.nsw.gov.au/s/article/Weeds-in-parks-and-gardens
Residents can report where vegetation is encroaching on parks and sportsfields, or impacting on road safety due to impairment to sight-lines to:
https://help.northernbeaches.nsw.gov.au/s/article/Vegetation-and-gardens-in-public-areas