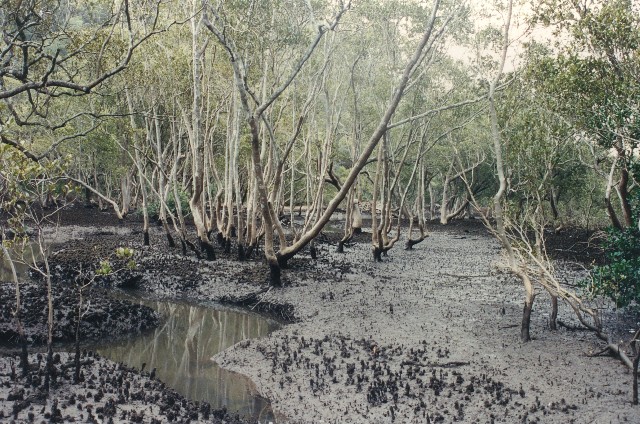 Above: Typical mangrove woodland in Sydney estuaries subject to daily tides. This summer mangrove fruiting has been very heavy and mudflats like these have thousands of young trees taking root. Very few will survive.

Above: The boundary from mangrove woodland, through saltmarsh dominated by beaded glasswort Sarcocornia quinqueflora, to freshwater reeds in the background. The difference in ground level may only be 15-20cm but that is sufficient to change soil salinity and degree of saturation providing conditions exploited by the different plants.

Below: New Zealand spinach Tetragonia tetragonioides, an interesting plant found on the edge of the saltmarsh. Captain Cook served this to his crew in New Zealand to combat scurvy. Joseph Banks took seed back to Kew Gardens and it became the first Australian and New Zealand plant to be ‘domesticated’ internationally. It was a critical part of the diet for the first settlers in Sydney Cove and in the early 1800s it was popular in Britain as ‘Botany Bay Greens’. Widely cultivated across Europe and America it became a weed in many places. Although recognised as ‘bush tucker’ there are few records of it having been used by Aboriginal people and that may be because the leaves have a high level of oxalic acid that limits their digestibility in the raw state.

Wetlands ‘ain’t wot they used to be’ and will change tomorrow.
By Dr Peter Mitchell

Following Phil Colman’s article in Issue 44 of Pittwater Online I think we should acknowledge the extent of the change that has occurred in wetlands along the Northern Beaches even within the span of our lifetimes. Whilst we admire the water of Narrabeen Lagoon and enjoy the recreational opportunities it provides how many of us are aware that the area of this lagoon, particularly its fringing wetlands and reed beds have been shrinking thanks to landfill activities since the 1950s? The same is true for every other coastal lagoon and estuary margin north from Manly.

Golf courses occupy parts of Manly, Long Reef and Mona Vale wetlands. Other playing fields have almost swallowed Curl Curl lagoon, and Narrabeen High School is built on part of a greater Warriewood wetland where there were once freshwater reed beds and swamp mahogany forest. The present day Warriewood wetland, saved by concerted community action over nearly 20 years is but a shadow of the original.

In Pittwater there have been lots of changes since 1940. Overall there has been a 96% decrease in saltmarsh (now a Threatened Ecological Community in NSW), 28% decrease in sea grass, and 121% increase in mangroves. In Careel Bay in 1940 there were 18 ha of saltmarsh, and 2 ha of mangrove (mainly on the banks of the creek). Kylie Wilton showed that balance reversed to 1.5ha of poor quality saltmarsh, and 12ha of mangrove by 1996. On Google images it is easy to see that part of the change was the 7 or 8 ha of wetland converted to playing fields but since 1996 the saltmarsh area has remained about the same but mangroves have covered another 5 or 6ha, expanding into the bay.

Careel Bay has some exceptional mangrove forest with an interesting boardwalk from Hitchcock Park, but the former saltmarsh may have been more valuable ecologically. This area is managed as a special environment partly to meet the Federal Government’s international agreements on migratory birds, JAMBA and CAMBA, but there are concerns that bird numbers have declined since the 1970s and we need to understand what is driving change.

Kylie listed a number of possible causes and it is very difficult to identify the more important ones:
•There may have been an earlier phase of mangrove clearing but no evidence has been found to support this.
•There may have been changes in the tidal prism and possibly compaction of the bay floor sediments.
•Rates of sediment supply and nutrient levels certainly increased as the catchment was urbanized.
•Changes in rainfall and flushing can affect saltmarsh boundaries.
•Sea level is known to have risen about 100mm in the 20thCentury (Fort Denison data), a rate consistent with global figures.
•All of the above!

Does it matter? Yes it does because this story is not limited to Pittwater as similar patterns of coastal wetland loss and paradoxical mangrove expansion have been documented in Botany Bay, Georges River, Lane Cove River, Homebush Bay, and in other places through to southern Queensland.  Setting aside the direct human causes it seems likely that we looking at early signs of climate change and sea level rise. If so, then what is the future of our coastal wetlands if sea level does increase as predicted by 380mm by 2050 and 890mm by 2100? Both of these dates are within the lifetime of some of today’s children. 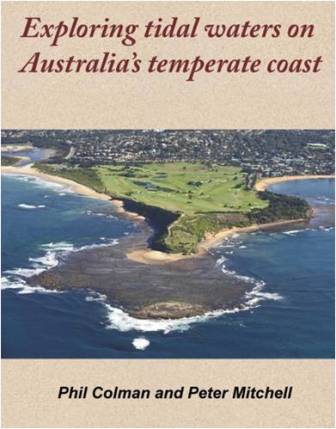