On the 25th of January, 1920 a young man who had in 1918 while 22 become the youngest Lieutenant-Colonel serving with the Australian Imperial Force, awarded the DSO, Military Cross, the White Eagle of Servia and the Croix de Guerre, drowned while trying to save the life of a woman at Palm Beach. The fatality sent a shock through the small community who would reside at this long stretch of sand each Summer, distressing both young and old and caused permanent residents and seasonal residents, all members of the Palm Beach Progress Association,  to seek a paid lifesaver for the following season. 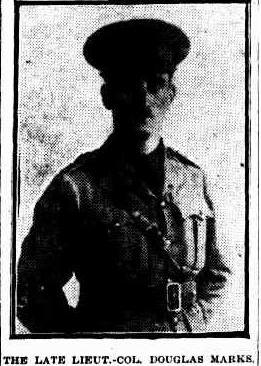 BRAVE OFFICER DROWNED. DOUBLE FATALITY.AT PALM BEACH.
In a brave but unsuccessful attempt to save a young woman who had been carried out by the undertow at Palm Beach yesterday afternoon Lieutenant-Colonel Douglas G. Marks, who served with distinction in the war, lost his life. Miss Johanna Mary Rogers, aged 32 years, whom he attempted to rescue, was also drowned.
THE LATE LIEUT-COL DOUGLAS MARKS
Miss Rogers, who resided at Catherine-street, Leichhardt, was surfing with several friends, when a strong current carried her out. Lieut.-Colonel Marks was on the beach at the time with another picnic party. He was fully dressed, but without attempting to divest himself of more than his coat he plunged into the water, carrying out with him a length of rope. After he had swum out some distance this broke, and he also was carried out by the undertow, and was seen to sink.

Later in the afternoon the body of Miss Rogers was recovered, but up till a late hour the body of Colonel Marks had not been found.

Lieutenant-Colonel Marks was 24 years of age, and resided with his parents, Mr. and Mrs. Montague Marks, at Lindsay-street, Neutral Bay. During the war he was awarded the Order of the White Eagle of Service. He served with the 13th Battalion, A.I.F., on Gallipoli, where he was present at the original landing, and later he went to France. He was manager of the Continental Paper Bag Company. BRAVE OFFICER DROWNED. (1920, January 26). The Sydney Morning Herald(NSW : 1842 - 1954), p. 6. Retrieved from http://nla.gov.au/nla.news-article15865249

Austin Dellit, an Eastern suburbs resident who camped with friends at Collaroy from 1909 on, and was among the founding members of the Collaroy Surf and Life Saving Club, formed 1911. Mr Delitt became Collaroy's first Beach Inspector in 1914. He was also friends with Jean  and Adrian Curlewis, names synonymous with Palm Beach and when approached to take on this position accepted to become Palm Beach's first official lifesaver for the 1921-22 season.

Next Summer the North Steyne club visited to provide a demonstration and instruction in current life saving techniques at the season's opening. The Surf Life Saving Association, striving to have beaches in the then Warringah Shire protected, provided and promoted such demonstrations on beaches that were without any form of a Surf Life Saving Club.

Shortly after the visit Len Palmer, a member of the Manly Club and frequent visitor to Palm Beach, discussed with the young men who would camp in the Reserve at the south end of the beach that they could support the new lifeguard as volunteers and form their own volunteer surf life saving club. A subsequent meeting at E.P.M. Sheedy's Palm Beach home on November 26th 1921, attended by permanent residents and summer permanents, proposed, and seconded by Arthur Goddard, the formation of a group of volunteer lifesavers and a Club to be named the 'Palm Beach Surf Life Saving Club'.

Those present at this meeting are the stuff of Pittwater legends and pioneer families; C. Larsen, Walter Rayner, J. Gonslaves, Arthur Goddard, L. Gallagher, Len Palmer, Roy Ellis, H.A. Wilshire, A. Milton, Geoffrey Oatley, Keith Oatley and Austin Dellit. Adrian Curlewis, who had witnessed the drowning the year before and was determined to see change,  was a member of the Committee from its outset.

The club badge, which no member could wear on his costume until he had passed his Bronze Medallion, featured a Cabbage Tree Palm on a circular backdrop. The Club's green and black colours stem from those of the First Battalion, AIF and were proposed by Great War veteran J.F. Mant.

Members trained hard this first season with 23 weekenders and permanent residents gaining their Bronze Medallion. They improvised for equipment; their first reel, secured permanently on the beach, homemade, with a ferry cork belt was supplemented in the southern corner a box line fixed to a post had to suffice.

The first Club House, a shed, was built beside the Peter's residence on land still owned, at that time, by the Barrenjoey Land Company. This too was made by members and afforded them a place to change and a place to stow club equipment. It was built to store the club's first surf boat.

Unfortunately the first surf boats were too heavy to be carried too far (they required 12 men to lift and move them) while the southern end of the Palm Beach, with its natural run out, was the best place to launch this craft from. It seemed sensible to leave the boat in the southern corner.

It is also worth noting, which became a point of contention later on when Warringah Council claimed the clubhouse and its materials as solely theirs, that much of the materials for this original structure was paid for by members or provided by their supporters:
PALM BEACH AWAKE. Palm Beach awoke from its Winter slumber last Sunday, and held its second annual meeting. The following officers were elected : Patron, W. J. Barnes ;president, A. J. Hordern ; vice presidents, J. Goldsmith, T. Peters, D. B. Wilshire and E. R. Moser; committee, J. Ralston, M. Loxton, A. Goddard, S. Gonsalves, L. Gallagher; captain, Adrian Curlewis ; boat captain, A. Goddard ;vice-captain, N. Holt ; hon. secretary, L. A. Palmer ; hon. treasurer, N. H. Erwin. R. D. Doyle, hon. Examiner in chief S.L.S.A.A., was the guest of theclub over the week-end. He made a fine speech at the annual meeting, and later instructed the members on the new R. and R. methods. The club is in a flourishing state. The annual carnival will be held on New Year's Day. Palm Beach will entertain all competitors at luncheon. A fine band has been engaged, and entry to all events is to be free. Mr. T. Peters has presented the club with a 600gal. tank, two showers, a pump, and sufficient guttering and downpipe for the completion of the clubroom. WHAT'S DOING ON THE SURF BEACHES. (1923, December 7). Arrow (Sydney, NSW : 1916 - 1933), p. 13. Retrieved from http://nla.gov.au/nla.news-article103537126

Warringah Council were approached with a request to build a second 'shed' for the boat on council land at the southern end. In the 1922-23 season, permission granted, the original shed was moved to Hordern Reserve and Dellit, reengaged for his second season, with these original members, carried out extensions and alterations. It was still a shed when completed but now had a verandah. In 1925 a shower room and fence around the clubhouse were added.

Club members were increasing rapidly too, much of this due to Adrian Curlewis' championing of the club and Palm Beach itself to fellow students at the University of Sydney's Law School and its residential colleges. Visitors and residents were kept safe, some rescued during these first seasons.

Palm Beach was still a fair way from the rest of Sydney then though and after these first seasons, and the proven necessity for full-time lifeguards during Summer, supported by squads of volunteers, membership fell away and Dellit, after four seasons as Palm Beach's Lifeguard, and Instructor for new members, did not take up a fith season. Three years, and three different lifesavers later, Captian of the Club, Adrian Curlewis, in examining the problem, knew the Club and Palm Beach residents had to provide better accommodation for the full-time lifeguard then that already in place in the ramshackle shed. He approached Warringah Council to build further extensions which would provide a modicum of privacy for the resident lifesaver during the season.

A.J. Hordern, whose Summer residence was beside the Reserve named after him, had, according to some residents, a growing dislike of this modified second 'ramshackle' shed, especially the way it interfered with the view from his balcony and the noise that came from it. He offered to finance the building of a new clubhouse as long as it was on a site other then where it was at present. He would then 'lend' one hundred pounds on improving this park.

The humble sheds, and all they represented in donated materials and members labour, were finished by December 1929 when, after years of squabbling between club members and manipulators within the community and Warringah Council itself, a new clubhouse, further up the beach was opened.

Warringah Shire Council has decided that the Palm Beach Surf Club's club-house must be pulled down and that any new structure must be erected on a more suitable site. The existing club-house, a plain erection on a public reserve, has been the subject of an offer by Mr. J. A. Hordern, who has expressed his willingness to lend the council £100 for improvements to the reserve, and to assist the club financially towards the erection of a new building.

It has been stated that the members of the surf club did not want to move, and Councillor Corkery said that if they would not go, the club should be disbanded and a paid life-saver put on the beach. It would never do to allow the council to be dictated to by the club, which was on the beach for the purpose of life-saving only. The council will have a meeting with Mr. Hordern and the members of the surf club, to discuss the question of finance. PALM BEACH. (1929, July 10). The Sydney Morning Herald(NSW : 1842 - 1954), p. 19. Retrieved from http://nla.gov.au/nla.news-article16546792

PALM BEACH CLUB-HOUSE.  In a letter to the Editor, the captain of the Palm Beach Surf Saving Club (Mr. Kenneth Hunter) states that there has been no dispute with the Warringah Shire Council. Discussions that have taken place with regard to new premises for the club have been of a most harmonious character. PALM BEACH CLUB-HOUSE. (1929, July 11). The Sydney Morning Herald (NSW : 1842 - 1954), p. 12. Retrieved from http://nla.gov.au/nla.news-article16568126

PALM BEACH SURF CLUB HUT.  The Palm Beach Surf Club's hut is to be removed from its present situation in a valuable public reserve to a more suitable site, near the centre of the beach. The Warringah Shire council will erect the new hut, which will cost £300. PALM BEACH SURF CLUB HUT. (1929, August 31). The Sydney Morning Herald (NSW : 1842 - 1954), p. 22. Retrieved from http://nla.gov.au/nla.news-article16579961 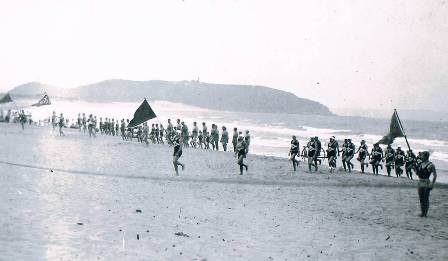 R&R squad competing in the first Surf Carnival to be held at Palm Beach on 1/1/1923, photo by Leon Cayley.