When I think of what we have achieved in only 20 years
My heart beats faster, and my eyes brim with tears.
Because we had a vision of how life could be
For the people of Pittwater it is now a reality.

Council saved the Warriewood Wetlands, then the escarpment fair
We were supported by the community because they really care.
I was proud to be Mayor for six and a half years, we worked as one accord
Then came the finest accolade, "The A.R.Bluett Award".

Judged the "Best and most Progressive Council in NSW."
Backed by environmentally aware residents how could we fail.
Then Winnererremy Bay, was threatened with medium density
We couldn't let that happen. Save it for the future was my plea.

On his last night at Council Eric Green said to me "save Winnererremy Bay"
A few days later an unexpected heart attack stole him away.
I said to GM Angus Gordon "we must save 'the Bay' but how?"
Council sold its waterfront depot. We have a wonderful regional park now.

We paid $4.5 million to the government to save Winnererremy Bay.
Now visitors corrie flocking  from many miles away.
Although we are a no frills council our commercial centres are looking great.
The Narrabeen Indoor Sports Centre is terrific. It took all spheres of government Local, Federal, State.

Now I don't like to brag but we all should take a bow.
We saved Mona Vale Hospital and Currawong - they are both protected now.
Should other tyrants rise we will fight, no fear of pain.
The first council to secede in one hundred years will march on again.

Being around Patricia Giles brings a smile to your face and a warm sense of family. Open, eloquent, engaging, with a minute to spare for anyone who requests it, this lady’s works, achievements and contributions on behalf of the community communicate a spirit that is clear, calm and bright.

Patron of Newport Surf Life Saving Club's Disabled Nippers Program, awarded the Distinguished Service Award by Surf Life Saving Northern Beaches, patron of the Mona Vale Girl Guides, patron of Bangalley Junior Touch Football, member of the Bicentennial Environment Committee, the Local Government Association Land and Environment Taskforce, the Ministers Migration Taskforce and the New South Wales Local Government Advisory Group, chairperson on the National Parks and Wildlife Advisory Committee, the lady who led the battle to retain and upgrade Mona Vale Hospital, plus the saving and keeping of the Warriewood-Ingleside escarpment, Bangalow Park and creating a regional park at Winnererremy Bay are what is visible. Add raising six children, running two businesses with backbone, kindness and integrity. Then competitive tennis and mediation work. For twenty five years in a row...Somebody up there likes this lady, an esteem and trust and love echoed by we here in Pittwater.

You have worked hard for decades serving the community; what led you to do this?

Before building on the Pittwater Grove Estate I had no interest in Local Government. I had six children two sets of twin boys and two girls. I taught yoga. I also ran my own opal jewellery business. When I moved to Mona Vale with my husband there were threats to Winnererremy Bay, *Lot 100 Mona Street, and to our local reserve. I formed a group called the Pittwater Grove Residents Group and became the President. I have never stopped campaigning from that time on. I met Sir Edward St. John (Former Warringah Federal MP) while working. He said “Be true to yourself, vote with your heart and never blindly follow the party line.”

I helped make a little reserve into a Bicentennial Park (Mona Vale). Helped save Winnererremy Bay. Helped stop the proposed medium density development on flood-lands (Lot 100) before I stood for Council.

A lot of the campaigns you've worked at have involved keeping or setting aside areas for parks for people and protecting pristine environments. Why has this been so important to you?

It seemed to me that forming Pittwater Council was a wonderful opportunity to save many of our pristine bushland areas for future generations. As each area was threatened I sought staffs help to work out a way to save them. Much of the Warriewood escarpment was in private ownership. Winnererremy Bay was owned by the government. Currawong was in private ownership. If each of these areas were developed Pittwater would be a different place. Today I am so proud of what this council and the Community have achieved. I am glad to have been able to influence these outcomes.

How do you see Pittwater being in 50 years ?

Pittwater will still be a little piece of paradise. In the 25 years I have been working in the community we have gone from strength to strength. The Pittwater residents have always shown massive support for each of the projects to protect and enhance our natural and built environment. I don’t see that changing. Most of the areas we have saved are fully protected so I don’t see that changing. We will still be the lungs of Sydney in 50 years time. Future generations will applaud what we have achieved as the first Council to secede in 100 years.

You're retiring from being a Councillor later this year; what are your plans for then?

I will find it hard to retire. I prefer to be active. I still do half an hour of yoga each day including head stands. I have only recently retired from competition tennis. I play social twice a week. I am a very keen Bridge player. I am an accredited Mediator. I am Mediator for the Manly Warringah Netball Association. Perhaps I will look to doing more mediation as I enjoy helping others find a way forward in any conflict.

What are three of your most memorable experiences from your time as a Cr. and the longest serving Mayor of Pittwater?

As Mayor I was thrilled when the first new council in 100 years won the AR Bluett Award as the best and most progressive Council in NSW. In 2006, on Australia Day, I received the Order of Australia Medal or OAM(for service to her local government and to the community of Pittwater). That was a great thrill. (Commonwealth of Australia Gazette 26.6.2006)

My biggest thrill was to help save Winnermerrery Bay from medium density development. I credit our General Manager Angus Gordon for coming up with the solution. We sold off our waterfront depot and paid 4.5 million to the government to purchase the bay as they had planned to develop it for medium density, which would have been a disaster. It is now a much loved regional park with a fabulous playground and kiosk.

If you could be a bird/fish/bush creature of Pittwater for one day what would you be and why?

I would choose to be a bird. Our wonderful bushland is a fabulous habitat for birds. I would not only enjoy this leafy paradise but I could see from the best vantage point our pristine beaches and beautiful Pittwater waterways. I love the fact that all residential areas and housing blocks provide canopy trees.
As a bird I could see and enjoy it all. The fact that council encourages homes to plant mature vegetation means that foods is not a problem. Yes, I would rather be a bird.

I love Barrenjoey Lighthouse. I was Chairperson of the National Parks and Wildlife Advisory Committee. There was a threat that as there was no money to refurbish the lighthouse and cottages that they should be locked and forgotten.
I convinced the committee that such an iconic treasure should be upgraded and preserved for futre generations. Most of the work has been done.
I have encouraged our local MP. Hon. Rob Stokes, to complete the newly finished road to the top. He has informed me that it will be completed next year. I hope to be present when they open the road. I will feel that my works is completed.

I have a few. My dad would say ‘The only way to deal with rubbish is to rise above it.’  I try not to let trivial things get me down.
As a Christian I like: ‘If God is for me, who can be against me.’ Romans 8:31
‘Be true to yourself and it follows as night follows day you cannot be false to anyone.’

‘The only failure is to give up trying.’

Above: Patron of Bangalley Junior Touch with Friendly (Brian Friend). 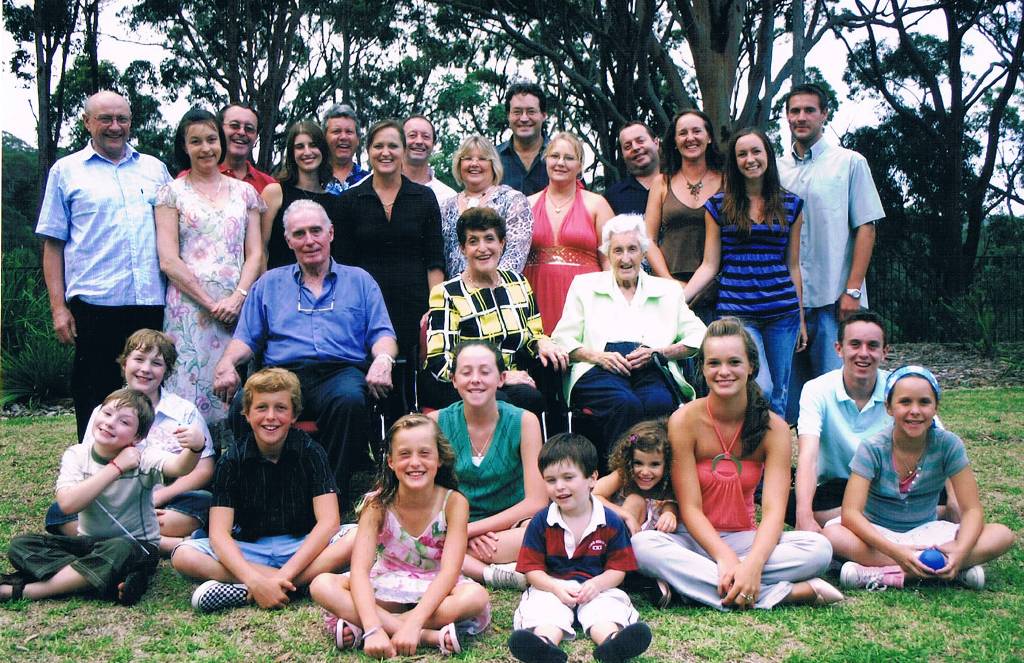 Photo of OAM celebration with my family 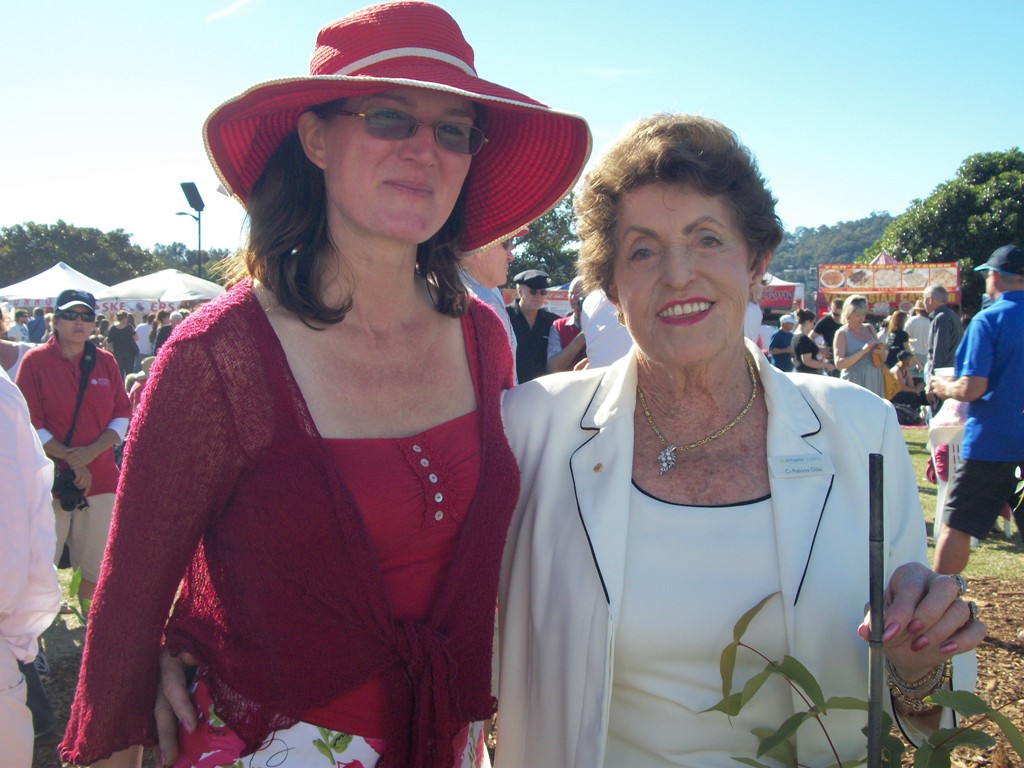 Karen and Patricia Giles at 20th Anniversary  of Pitwtater Council Celebrations, May 2012

I wanted to leave a legacy for future generations
From Barrenjoey Lighthouse to Narrabeen Lagoon
From West Head to the untamed shores of Pittwater
Where Captain Authur Philip saw our potential so soon.

The areas protected are not just for our lifetime
But for children yet to be born.
Pittwater Council was formed through blood, sweat and tears,
Mighty warriors ignored the scoffers scorn.

After 20 years what are our achievements?
What has the first council formed in a hundred years done?
Every cent raised in Pittwater spent in Pittwater
Gaining more than 120 hectares of public land since we first began.

Winning The Bluett Award in 2006 as the best and most progressive council in NSW
We realised we were on the right track and we would never fail
We saved the Warriewood Wetland and the Escarpment
Selling our depot to purchase Winnererremy Bay.

The government had decided to sell the land for medium density housing
The twenty hectares is a beautiful Regional Park today
The fight for Mona Vale Hospital and Currawong still fresh in our minds
The Narrabeen Indoor Sports Centre, Mona Vale and Avalon libraries
Were achievements not far behind.

You can see why I feel justifiably proud
Of what a new council can do.
We have wonderful professional staff and councillors
But the key ingredient in the mixture was you.

Our fabulous residents and our volunteers backed us all the way.
Pittwater is protected for the future and for that I thank God every day.
Pittwater is a piece of paradise, that is easy to see.
Looking back more than twenty years has been a privilege and a pleasure for me.

Above:  Winnererremy Bay. Picture by A J Guesdon.