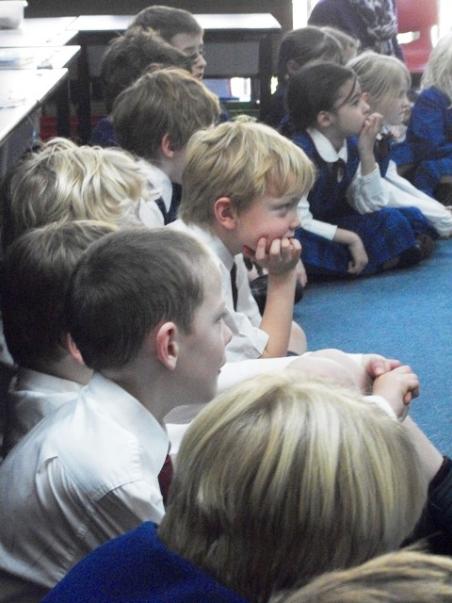 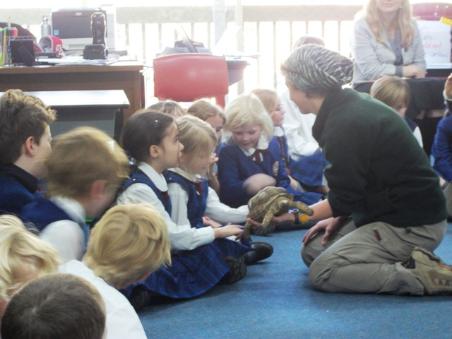 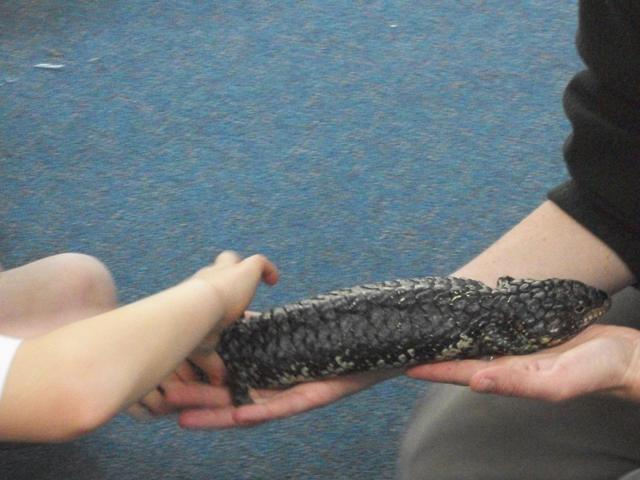 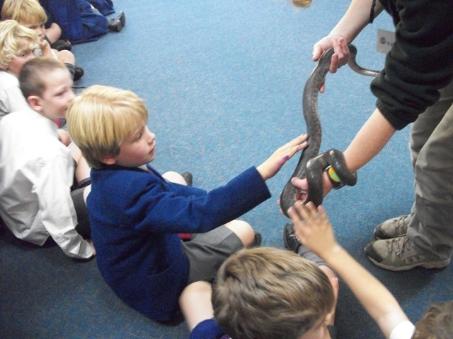 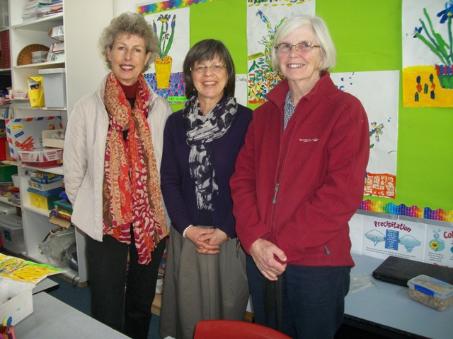 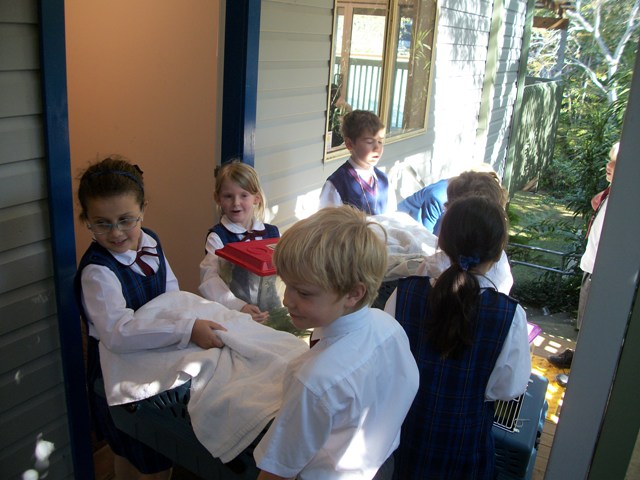 On Tuesday this week (28.8.2012) the Taronga Zoomobile visited classes 2BG and 2HM at the Loquat Valley Preparatory School at Bayview. As part of the Pittwater Environmental Foundation’s grant from the Hawkesbury Nepean CMA for bushcare and engaging the community with the Botham’s Beach site, Kerry Staker, teacher and zookeeper, brought a range of animals to teach the children about habitat, each creature’s habits and how these all work together to maintain healthy environments and species. The year two students are also currently engaged in a Sugar Glider and Squirrel Glider project and learning more about these Botham’s Beach residents and what they may do to encourage more to return.

The first creature Kerry introduced the classes to was ‘Philomena’ a female Goliath Stick Insect (Eurycnema goliath). Females can reach lengths of up to 20 cm while males are much smaller. These insects will, when disturbed it will display the bright red colour under its wings and the eyes-patterns between the thorax and rear legs. Philomena, who had lost one of her legs in escaping from a predator, a defence mechanism Kerry explained, allowed the children to understand that some creatures are food for others but can decide to drop a leg and head in the opposite direction if caught by a bird. They live in our eastern forests, feed mostly on eucalypt leaves, and can throw or ‘flick’ their droppings a few metres so they don’t give themselves away to predators.

Roy the Box Turtle from India, found in the suitcase of a visitor to Australia, and around 30 years old, was next to be introduced to the children. Kerry explained that he may live to 70 years, prefers eating anything pink and that she spends time ensuring she finds healthy pink foods, flowers, fruits and seeds, to meet his appetite and references.

Acorn a shingleback lizard, girlfriend of ‘Sludge’ made an appearance after Roy had been returned to his box. Her fat tail was pointed at as Kerry explained she stores water and food in there in the form of fat for when other food is not readily available. Acorn is 7 years old and her diet consists of spiders, snails and even dog food or mashed banana if these are left outside for the family dog. Shinglebacks (Trachydosurus rugosus) are relatives to the blue tongued lizards found in Pittwater but their known range is west of the Great Dividing Range.

Gibbon a green tree frog (Litoria caerulea) was the first creature the children could not touch. Kerry wetted her own hands before picking him up, explaining the frog’s skin is like a sponge and anything on our own skins will be absorbed and may harm these amphibians. As frogs live in ponds and streams, and trees in Gibbon’s case, the classes learnt that picking up schoolyard rubbish that may flow into these from rain storms will help them to see these lovely green skinned tree climbers more often.

Anna, a non-venomous spotted python (Antaresia maculosa) was brought from her pillowslip next. Kerry explained that she is 10 years old, that her scales are the same composition as fingernails, that she is very strong and ends her prey, usually micro-bats, to sleep by squeezing with her strong muscles. This snake was also a good way to remind the pupils that if they came across a snake outside they should walk away quietly and go and tell an adult.

Apani, a Bogle or Native Bush rat (Rattus fuscipes), was shown to the children in her grass and leaf nest. She was the first warm blooded mammal the classes met and also a marsupial with a pouch. Apani, like the frog, lizard and turtle, is one of the bush’s allies as she feeds on seeds, fruits and leaves, distributing seeds in her droppings and cleaning up refuse simply through diet for this species.

The last little Australian the children met was Tahlia, a ring tailed possum  (Pseudocheirus pereginus)  who had been in her mother’s pouch when a lady spotted her being attacked by a cat, rescued her and brought her to Taronga Zoo. Tahlia, brought up by Kerry just like any other baby, was more comfortable with being handled then what her mother, always a wild creature, is and has often made visits to schools as part of the Zoomobile. Tahlia helped the children understand that it is best to leave wild creatures alone as they are not the same as those that have been hand reared. Her mother’s experience, and long time in recovery at the Zoo’s hospital, was a good example of why domestic pets such as cats and dogs should be kept in when nocturnal creatures must come out of their burrows and nests to feed.

Tahlia, like the Squirrel Gliders and Sugar Gliders, needs a tree hollow to live in comfortably when in the bush. In Australia it takes 100 years for these to form in our trees. As we have lost or cut down so many of these, nesting boxes have been built and installed at Botham’s Beach.

The children really enjoyed meeting the Zoomobile animals. They were quiet because they knew they may frighten them being noisy, asked questions that broadened their insights and look forward to hearing more from Kerry about the Botham’s Beach Sugar Glider in the future. When students were selected to help Kerry carry the small cages back to the ‘mobile’ van just about every hand sprang up and two were assigned to carry the bigger cases. When asked if they enjoyed the presentation; “Yes ! It was great.”

We thank Kerry, Beth Glyde, teacher at Loquat Valley Preparatory School, and Marita Macrae and Lesley Stevens of the Pittwater Environmental Foundation, and all the children of 2BG and 2HM for their warm welcome and politeness. What a great school! What a great project.