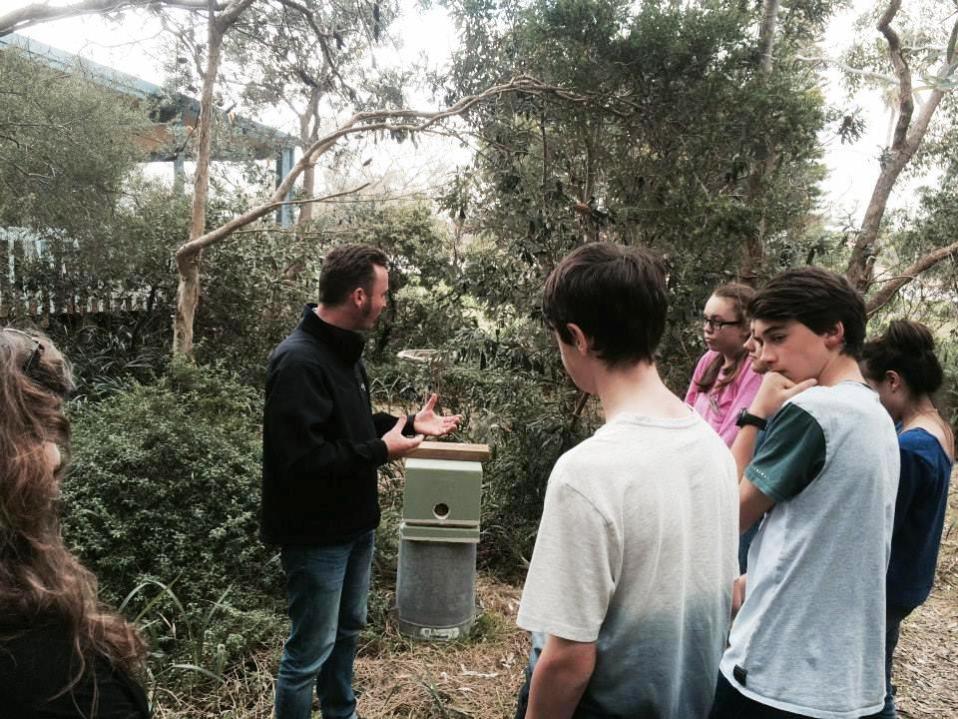 David of Coastal Environment Centre - Narrabeen giving a tour of the CEC and explaining its sustainability features.

Young people with a passion for the environment attended the hands-on sustainability congress “Youth Leading the World”, this week, September 2-4. This is the sixth annual event run by non-profit organisation OzGREEN in partnership with Pittwater and Warringah Councils at the Coastal Environment Centre in Narrabeen.

The congress has grown rapidly since the inaugural event in 2009 and is being facilitated at over 100 locations in Australia and overseas at different dates this year. Participants explore local and global sustainability challenges, look at their own eco footprint and work on ideas for change at home, at school and in their communities. On the third day of the congress, the attendees present their action plans to the community and seek support for their initiatives.

“The congress is a great opportunity to connect with other youth who share your environmental or social concerns, brainstorm new ideas to make our world more sustainable and turn them into reality. While the topics are serious, there’s a great energy at our congresses and it’s a lot of fun, too,” said Vanessa Moskal, Warringah’s youngest Councillor and Northern Beaches YLTW facilitator since 2009.

Participants do not need any prior experience in sustainability, just a keen interest to learn more and become involved.

OzGREEN has been working in environmental education for more than 20 years and started YLTW six years ago. “We were concerned by the lack of political action on critical issues and saw the need to foster a new generation of leaders who will actively work for a switch to sustainable living,” explains Sue Lennox, OzGREEN’s founder and co-CEO.

Founded in 1992, OzGREEN is a non-profit sustainability organisation, which educates and empowers young people, corporations and communities to tackle environmental challenges (such as climate change and water) and become leaders of social change. OzGREEN operates nationally in Australia and has established programs in Asia and Central America. The calibre of OzGreen and Sue Lennox’ work has been recognised via national and international awards including the Eureka Prize, Banksia Award and UN Media Peace award.

Lack of use and provision of public transport

Lack of spreading the word

Concern 5 and 6 had equal number of votes so the participants decided to include them both.

All is sustainable and everyone can look forward to a bright future. We interact and look after sea life while everyone can enjoy a litter-free ocean to swim in because there is no litter in the first place as modern technologies have changed any waste to be biodegradable.

Working on our vision - lots of sea life made it on to the butcher's paper ;-)

What an inspiring day. All action plans groups got down to work and produced very professional, engaging presentations for the Community Forum. The Forum was well attended with adults listening and offering support. Well done to everyone!

Here are more details on the Northern Beaches action plans:

Run a shark festival at Dee Why Beach to educate people about sharks, involve them in the issue and reach the ultimate aim of taking down the shark nets and stop the culling.

To be held this summer.

Put up posters in schools and around the beaches to remind people to take their rubbish with them.

Organise a Clean Up Day in conjunction with Clean Up Australia Day next March.

Cooperate with Surf Clubs to make regular announcements on the beach to take rubbish home and get their members involved in educational campaign.

3) RAIN FOR WATER (Natalie and Nadia)

Fundraise money at school to install rainwater tanks at the German International School.

Hold presentation about water wastage and lack of clean water in developing nations (drinking water / sanitisation) at school, start with their own class and then expand to whole school and other schools in the area.

Hold presentation on food issues at German International School, start with own class, then expand to whole school.

Run first fundraiser for OzHarvest (Organisation which rescues perishable food and distributes it to 500 charities in Australia).

Run regular fundraiser once every term or two terms to support food charities.

Congratulations to all those who participated in this year's YLTW Northern Beaches Congress - some great ideas and initiatives!

Report and Pictures courtesy YLTW Northern Beaches, 2014. Keep up to date with YLTW on their Facebook Page