The long, long trailer lives again. Remember the old movie? It is often on TV of a Saturday afternoon. Lucille Ball and Desi Arnaz travel around America in an enormous travel trailer or caravan as we call it. Lucy collects rocks. So many the weight brings car and caravan grinding to a halt on a long and dangerous climb through the Sierra Nevada mountains.

It is happening here in Australia. Every year more and more people head off in caravans and almost everybody does some fossicking.

They find opal at Lightning Ridge, sapphires at Inverell, petrified wood at Chinchilla and zircons in the Harts Ranges. Other finds include agate, carnelian, topaz, quartz crystal, jasper and chrysoprase.

What can you do with the rock you bring home?

Wingala Lapidary Club has the answer. It is the only lapidary club on the Northern beaches and by joining you can learn to turn your rocks into unique jewellery. What a thrill to wear something you found and personally crafted!

Right: Grinding a stone into shape for jewellery at Wingala Lapidary Club. After the initial shaping, the stone will be finished on fine sanding wheels and then polished on a rotary buff.

Wingala has all the equipment. If, unlike Lucy, you have no suitable rock, slabs are available for you to transform. New members are given a slab and coached through their first project.

The club was established in 1965 by a group of enthusiasts attending evening classes in lapidary at the Manly Boys High School. Two founding members, Marie Kinnersly and Ron Orth, are still active in the day to day operation of the club.

Wingala is in the south east corner of Harbord Park, adjacent to the corner of Wyadra Avenue and Oliver St, Freshwater. It is thought that Marie’s father built the Harbord Park premises for the local cricket club before World War II.

Before moving to Harbord Park, Wingala led a nomadic existence. From operating in members’ garages, it moved to Hibiscus Park Nursery at Warriewod, then to the Presbyterian Church at Allambie Heights before moving in 1971 to a disused kiosk at Brookvale Oval. A fire forced a move to the Hallstrom Pavilion at the oval and then another move took the club to rented premises in Harbord.

In 1976, Wingala moved to the Manly Surf pavilion before demolition forced another move in 1980 to Narrabeen. Sale of the premises forced storage of equipment for 12 months.

Since February 1985, Wingala has been in Harbord Park. New members are always welcome. When they join, they are coached through making a cabochon, or domed stone, suitable for jewellery. Members are all happy to pass on their knowledge and skills to newcomers.

The club currently has around 50 members. Many are retired but there is a growing group of younger members who work in the evening. 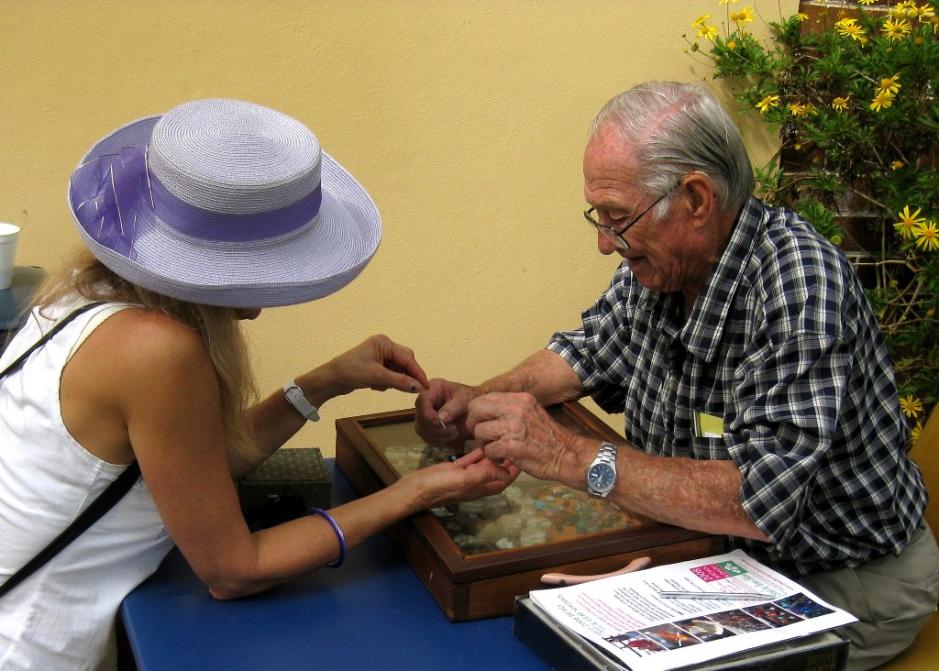 Ron Orth showing opals and other gems he found and cut. Ron was one of the founding members of Wingala lapidary Club in 1965. He still attends each week to work on specimens and pass on knowledge gained over the years to newer members. 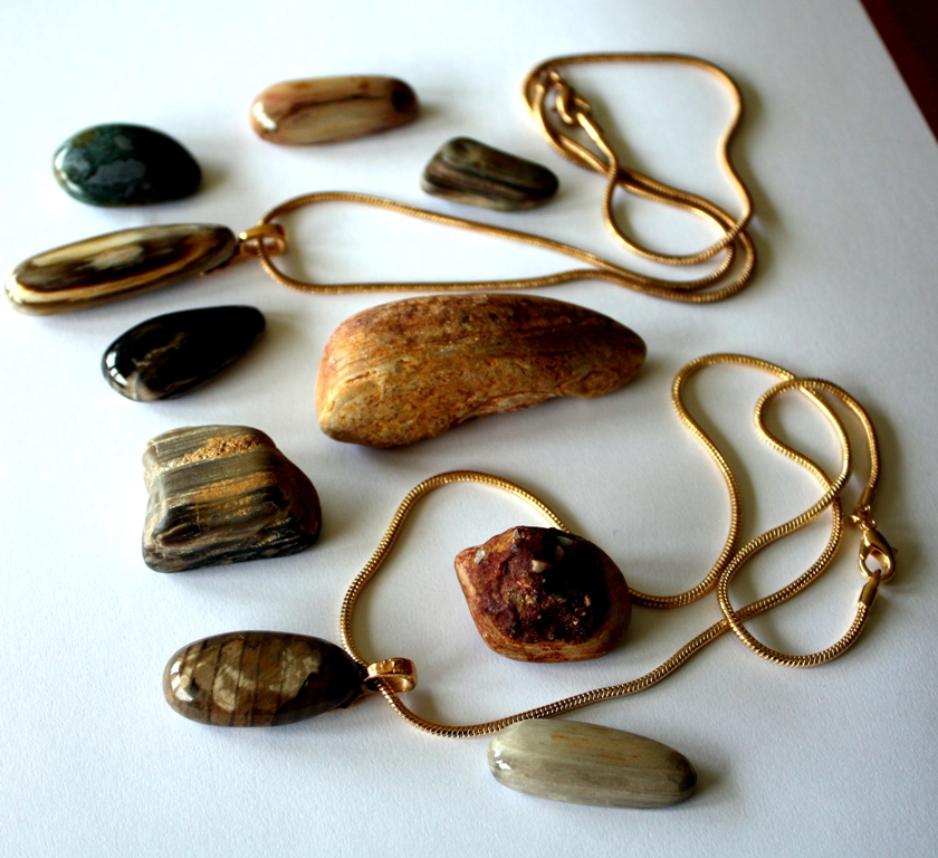 Who could believe that a dirty old stone, in this case a 100 million year old piece of petrified wood, can be transformed into unique and attractive jewellery. 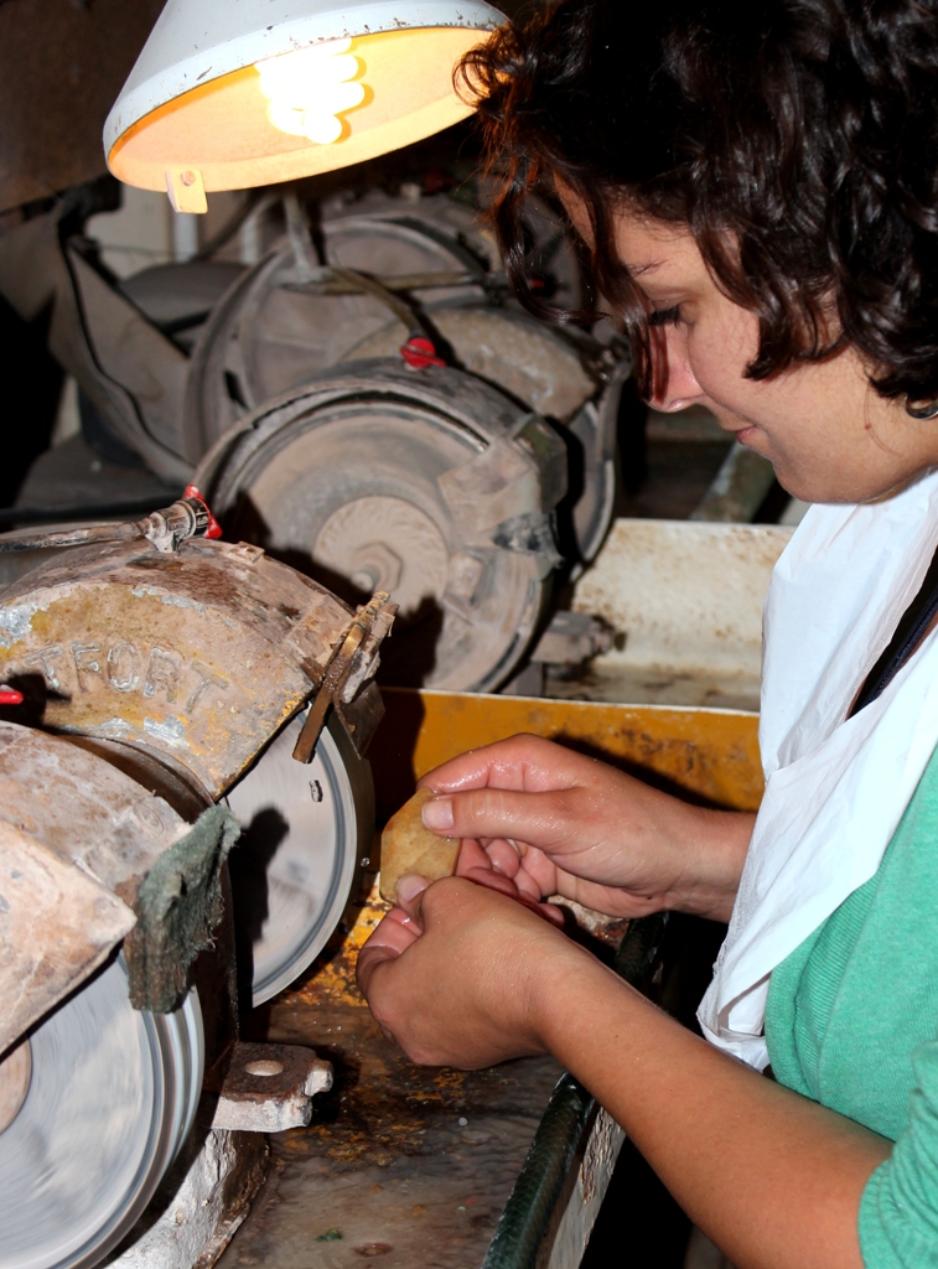 Michelle making her own jewellery at Wingala Lapidary Club