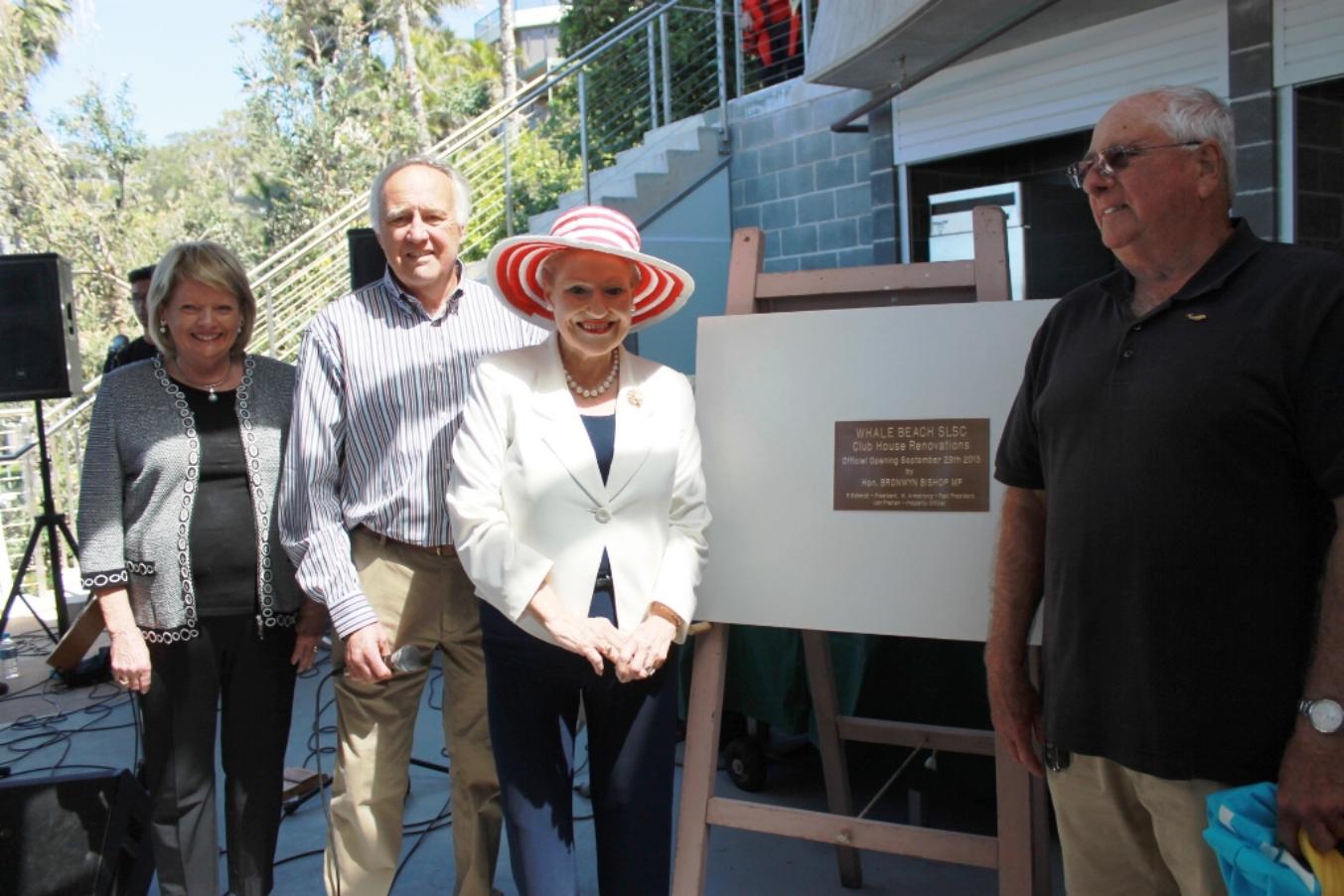 Many surf life saving clubs were open last Sunday as part of a Surf Life Saving NSW program to invite the public to visit their local surf clubs and learn more about the great work the largest body of volunteers in Australia performs each season. Happily Whale Beach had a triple reason to celebrate this year.

Club Captain Alek Petersen gave a welcoming speech to around 100 Whale Beach SLSC members and their guests last Sunday, 29th of September, at the official opening of the new clubhouse of this fine old Pittwater institution on their annual Gala Day.  It was also an opportunity to officially celebrate the 75th anniversary of Whale Beach SLSC (formed 1937) which they were prevented from doing on a large scale in January 2012 due to the extensions and refurbishments being incomplete.

For those of us who can remember Moby Dick’s as the place to go and see bands during the 1980’s, sip cold beverages on hot summer afternoons in the old upstairs bar or have New Year’s barbecues on the beach in front of the club, this building holds a lot of fond memories. The original two storey clubhouse was opened in 1953. During the past two years members and their supporters have funded an extensive upgrade of the clubhouse and its facilities. Whale Beach SLSC clubhouse is completely owned by members, one of only two surf life saving clubs in Pittwater to have achieved this. A large deck and barbecue area projecting onto the beach side of the clubhouse is now complete, as well as accommodation for members and a gym plus board and ski storage and an upgrade of the club’s rooms. The Whale Beach Surf Club has around 250 active and reserve active members and some 130 supporting associate family members.

The grand opening of the new multi-million dollar club facility included live music, rides and activities, Life Saving Demonstrations and competitions, Surf Boat and Inflatable Rescue Boat (IRB) exhibitions and a Westpac Rescue Helicopter Flyover and Jetski Display. The unveiling of a plaque dedicating the new building was performed by the Hon. Bronwyn Bishop, MP for Mackellar, to officially open the Club House.

The Hon. Browyn Bishop ackowledged the huge contribution of this surf club over its decades of service and all those who have given of their time and energy to serve those who frequent this hidden gem of Pittwater. Ms. Bishop also acknowledged a surf club built and funded wholly by its members, reiterating that the reasons so much has been done for so long is that all members and supporters believe in the Surf Life Saving movement.

"This movement in its essence has been formed to save other people's lives. People whose names you may never know, people who may never thank you for what you have done. But the aim is to have all people enjoying our beautiful beaches and to have someone watching over them when the water becomes a danger and they need assistance to live.

It is no suprise that so many of the people who formed this movement came out if World War I. They'd been there to fight for their country, they were used to relying on each other. Many of those people enthused that same ethos into the Surf Life Saving movement. Something we should never forget is the very origins of this nation, and what makes us great, is our dedicatio to looking out for our neighbour, is reaching out to someone who is in need of assistance. In building this structure, in completing it you are expressing what is our basis for so much here in Australia - a belief in your fellow man and fellow woman and the need to watch out for each other.

And so it is with those thoughts in mind that I have the great pleasure in declaring this building Open."

Richard Stewart, Life Member and ex-President, described by Alek Petersen as ‘one of the cornerstones of this great club’ gave the apologies for distinguished guests and members who could not attend before introducing current President of the Whale Beach SLSC, Mr. Philip Schmidt.

We are fortunate in being able to provide this address given by Mr. Schmidt for those who could not attend this ceremony. We thank Mr Schmidt for this courtesy.

Address given by current President of the Whale Beach SLSC, Philip Schmidt:

Distinguished guests, Branch President David Murray and neighbouring Club Presidents, Club Members, Club Past Members and friends. We are today celebrating two important occasions. They are our 75th anniversary which fell last year, and the opening of the clubhouse renovations. The renovations preventing us from celebrating our 75th last year.

We would not be opening the Club renovations if the club was not formed some 75 years ago by our forefathers. Some of them are remembered in the plaques adjacent to the entry steps. It is not forgotten that they had many loyal Whale Beach people as well as members travelling from outer suburbs serving with them. Some of their families are here today. Would you all join with me to wish Happy Birthday Whale Beach Surf Club – Hip hip – hooray.

I now turn to the renovations. They took one season more than predicted and thanks to Jon Pratten, Paul Hughes our handy man, Jon’s Building Committee and the Finance Committee for steering us through the difficult building scenario. We now have a magnificent building for Members and we own it.

Once again, thanks to our forefathers and their families.

During the building program we found it difficult  to train new recruits and therefore we are now in a situation of having to reinvent ourselves. We now have a large training program under Lara Boyle and we hope to attract more active and associate Members. Lara is manning a Member’s enrolment desk. Lara can join you online.

You will notice the new facilities to be used by Members include modern kitchens, BBQ’s and accommodation areas. On the weekends we plan to have drinks and coffee served on the deck.

Of course this building program could not have been realised without the financial support of our Members, Associate Members, our neighbours and the community. In recognition of their support we will be installing a ‘Wall of Support’ listing the names of people who have given generously over $500.00.

There have been two tranches of fundraising – those who donated when we first envisaged renovating will be recognised on the wall. Those who wish to donate today will be awarded Club Membership for one year.

Next to Lara there is a desk for those people who wish to further donate. Our cutoff will be the end of the Season.

I have previously said that we have to reinvent ourselves and rebuild our membership. We have a nucleus of enthusiastic young members who have, together with Chris King (King of the Kids) organised today.

We will build on this base and we now have two Boat Crews under Midget.

We will also endeavour to become competitive in the water as we would like to see Members compete in Surf Events.

Our thanks today go to the Gala Day Committee led by James Gellert and Chris Henrikson.

Some other activities over the coming months include:

. The traditional Neighbours Night, often referred to as ‘Pig Night’ to be reinvented as well - this will be held in the first week after the New Year

. The Sub Nippers over the Christmas period

. On the 14th of December this year we are planning Christmas Carols on the Beach by the 70 piece ‘Rock n’ Soul’ Choir. There will of course be Santa for the kids.

On behalf of all the Membership of Whale Beach Surf Club I thank everyone for being here today. I assure Members that the Management Committee will look after your asset and we encourage all who use the facility to do likewise.

I would also like to inform you that our restaurant tenants have invedted well over $400,000.00 to further enhance your asset.

I will now hand over to Cr. Bob Grace, who is representing the Mayor of Pittwater and then ask the Hon. Bronwyn Bishop to officiate the opening.

Councillor Bob Grace of Pittwater Council, who is also a Member of Whale Beach Surf Life Saving Club, expressed his pride to be attending the 75th anniversary celebrations and the Gala Day and more importantly for the official opening of the new facilities.

" This club began 75 years ago from those who would visit here on the weekends and from a small nucleus of local Whale Beach people. I wasn't aware until informed by the council that Whale Beach was the first Club to have female Life Savers. It is also the first Surf Club to have a MArathon Swim. This was initiated by Bob Lynch, father of World Champion surfer Barton Lynch, in 1974 and has coninued until the present. It has been a great success and the model used for annual marathon swims all over Australia.

The Whale Beach Surf Life Saving Committee are to be congratulated on what they have achieved with this renovation. Undertakings of this magnitude do not succeed unless you have committed people to drive the project and make sure it becomes a reality. I'd like to personally acknowledge someone who has been fundamental in this, John Pratten.

Mr Pratten has given almost two years of his life to make this a reality."

(Hear Hear - from crowd - and applause).

"...and I might add, to the detriment of his golfing handicap. I'd also like to acknowledge our President, Philip Schmidt for his leadership ability and for making this club free of debt and wholly owned by its Members.

When al is said and done, the people we really need to thank are our community. If the Whale Beach community hadn't been behind this project who know how it would have happened. You will remember that Pittwater Council was formed because the people wanted a separate council. The people are aligned with the Surf Life Saving movement, Pittwater Council is aligned with the Surf LIfe Saving community.

PIttwater Councl now has a Pittwater Ocean Series which has been running for three years and is a great success. The premeir event in this series is the Palm Beach to Whale Beach marathon swim.

In closing I'd like to thank the Whale Beach SLSC on behalf of Pittwater for this surf club upgrade for the people of Pittwater, and for the Life Saving movement itself." 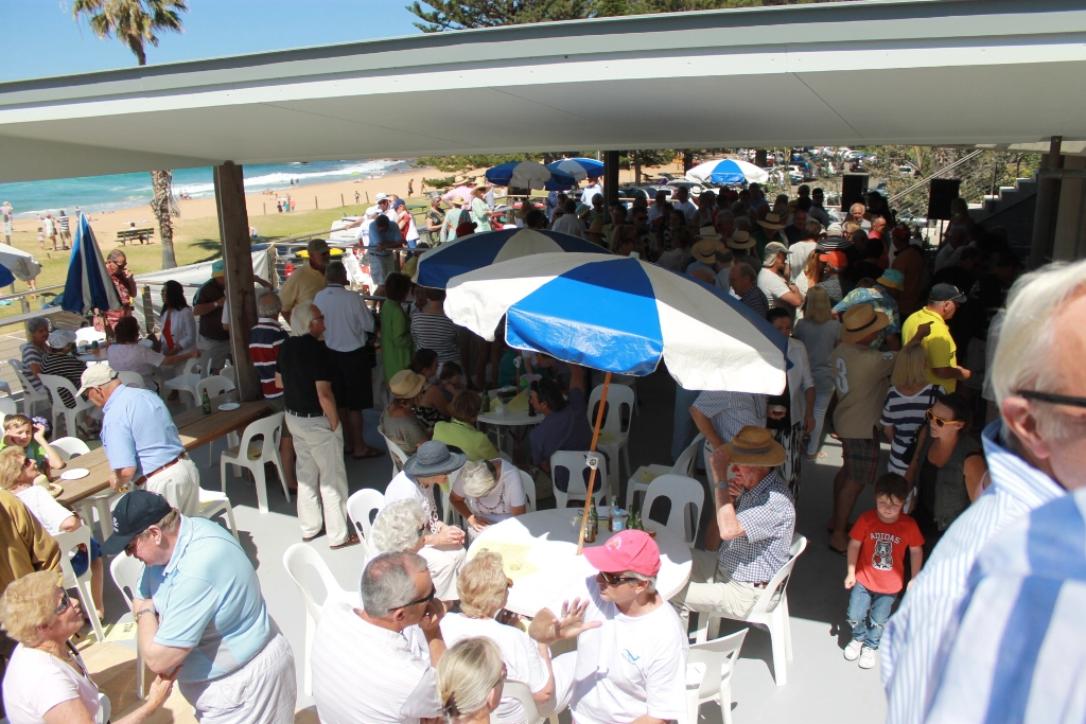 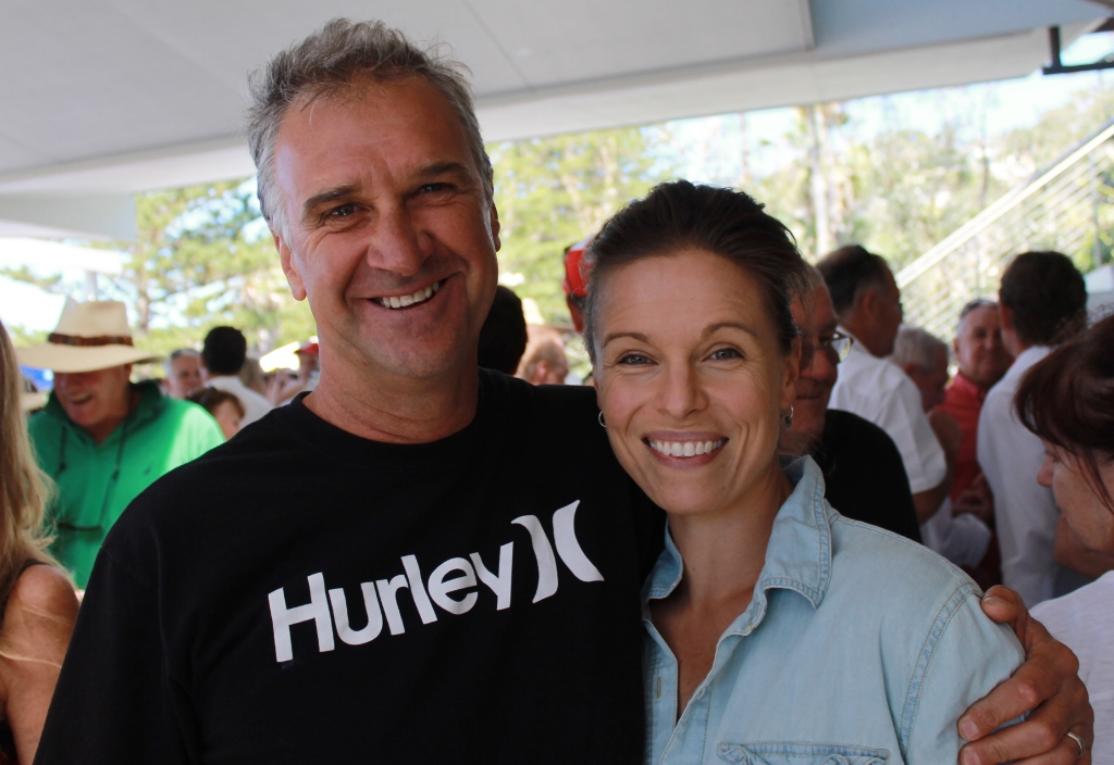 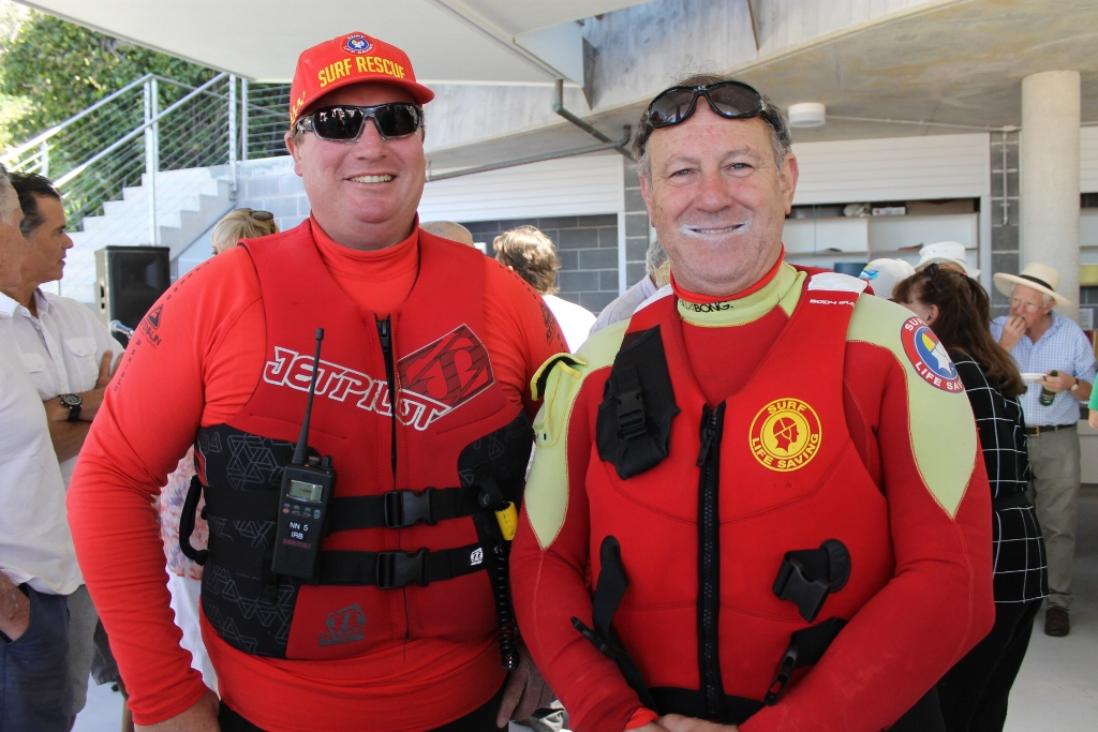 Glenn Jones and Geoff Hale showing what it's all about - being on Patrol and Saving Lives. 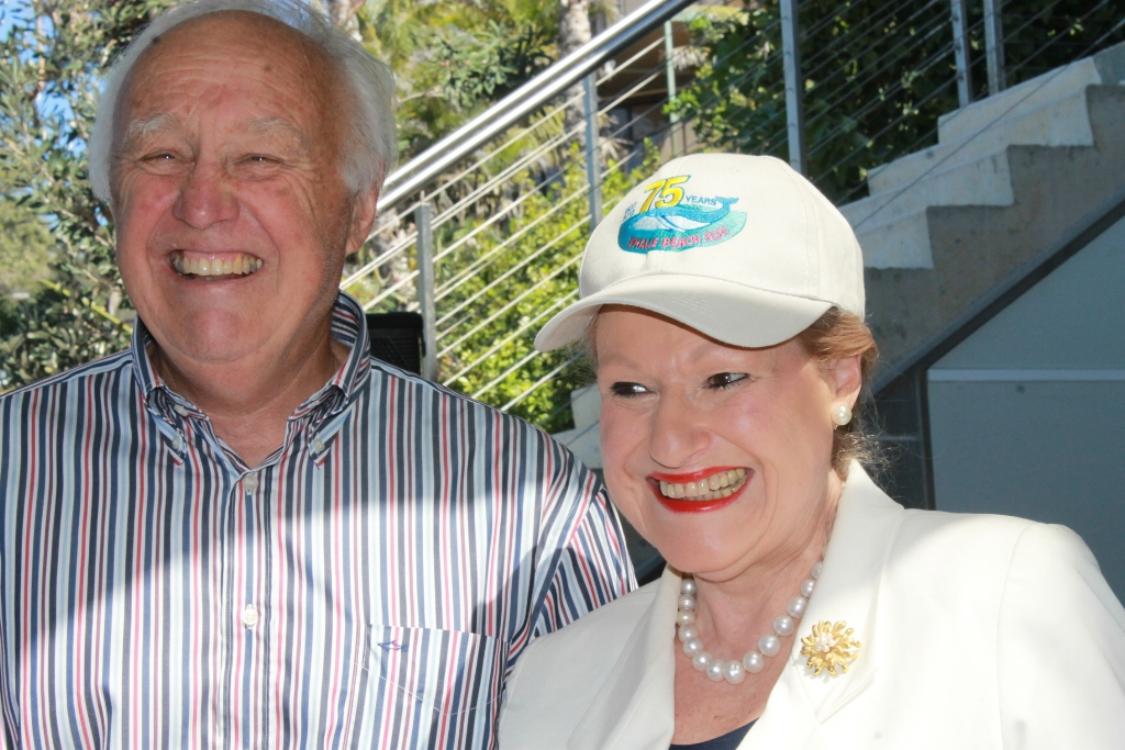 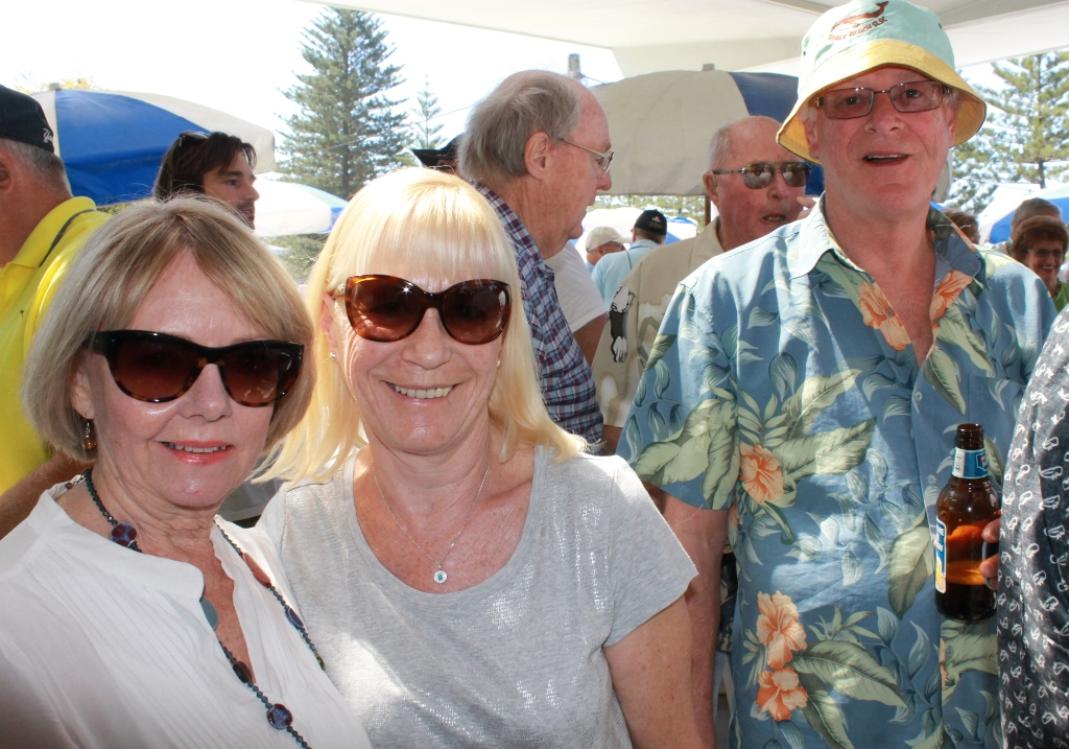 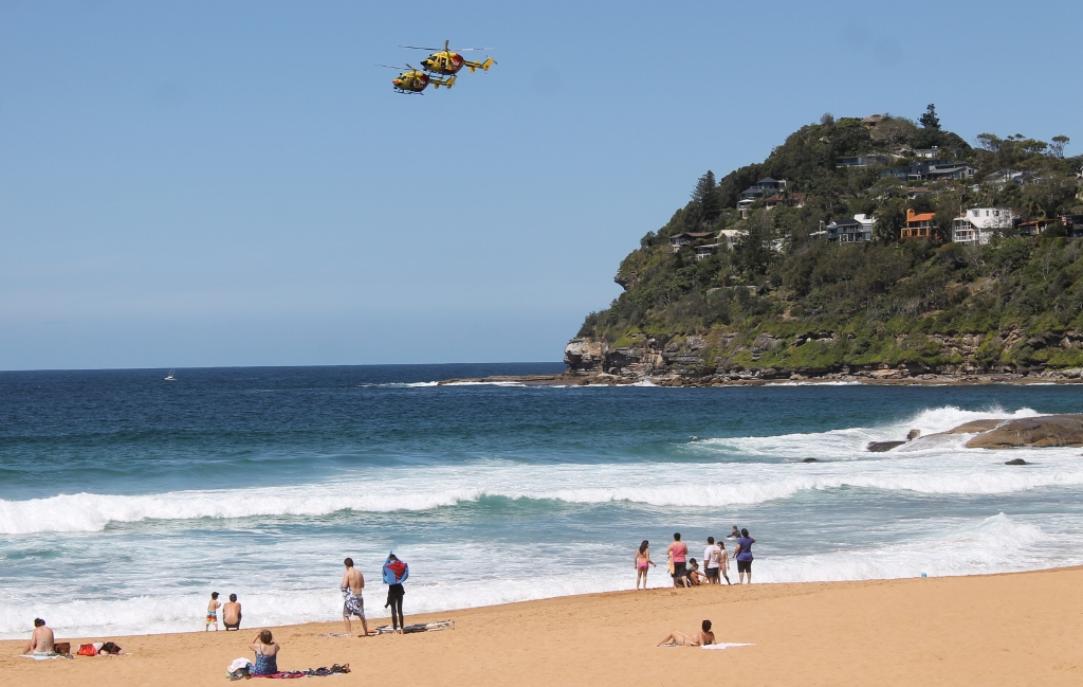 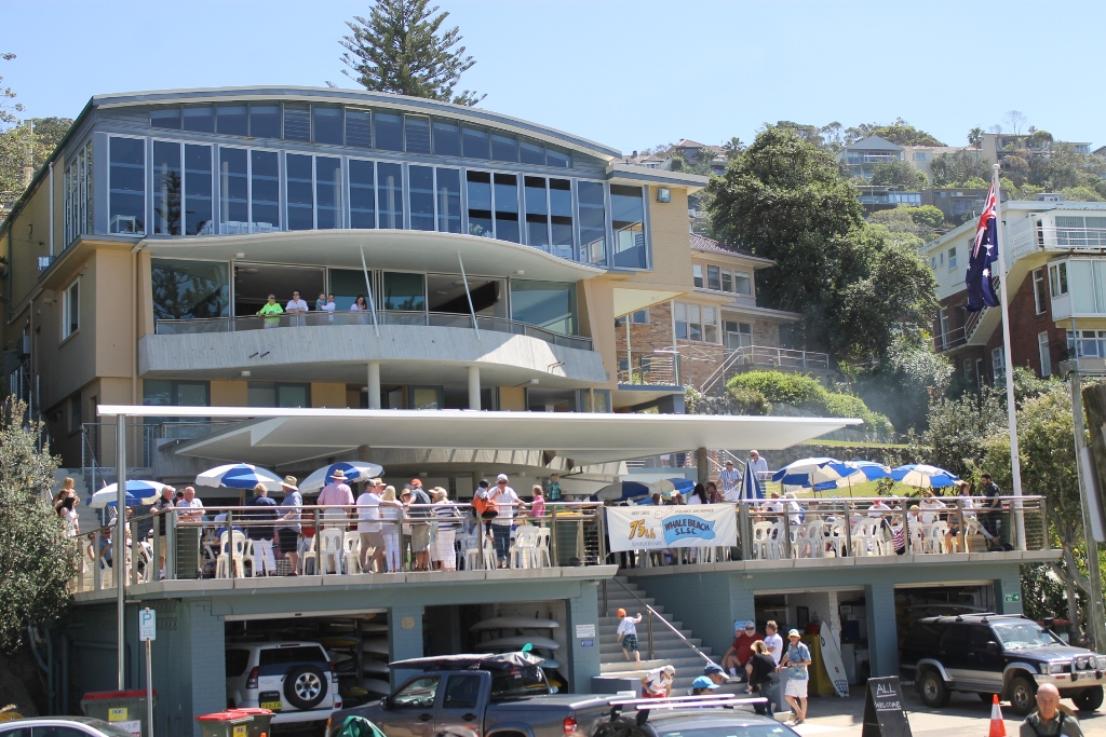