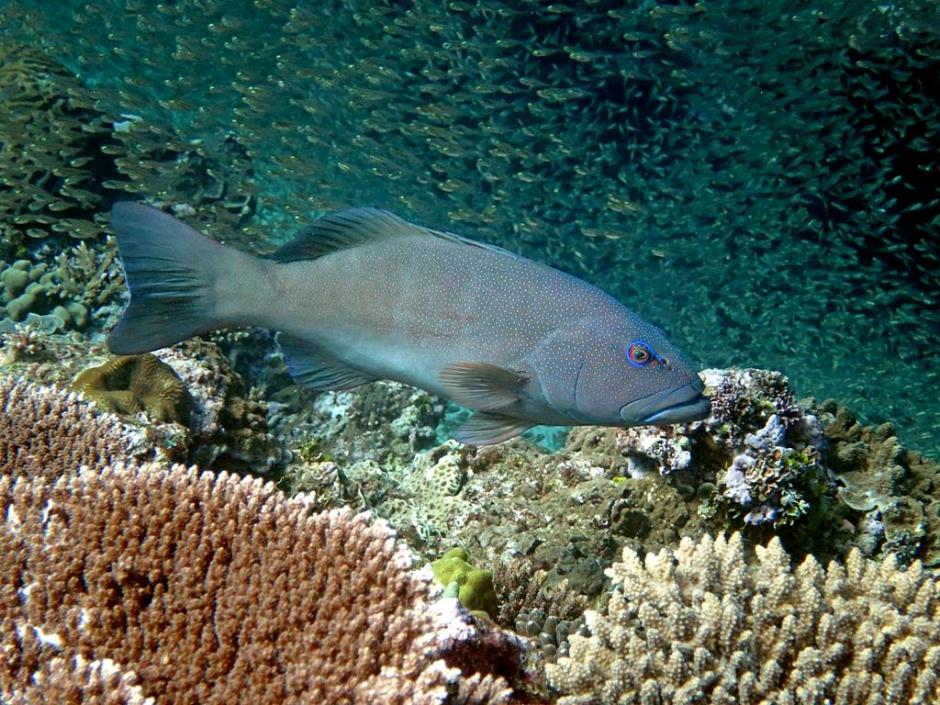 Coral trout in protected ‘green zones’ are not only bigger and more abundant than those in fished ‘blue zones’ of the Great Barrier Reef Marine Park, but they are also better able to cope with cyclone damage, according to a long-term study published today in Current Biology.

Coral trout biomass has more than doubled since the 1980s in the green zones with most of the growth occurring since the 2004 rezoning. These and other changes identified by the study show that the green zones are contributing to the health of the Great Barrier Reef and that similar approaches may be beneficial for coral reefs around the world.

The joint project between the Australian Institute of Marine Science and the ARC Centre of Excellence for Coral Reef Studies at James Cook University combined a vast amount of information from underwater surveys carried out from 1983-2012, on reefs spread across approximately 150,000 km2 (more than 40 per cent) of the Marine Park.

The Marine Park was rezoned in 2004, and marine reserves where fishing is prohibited (called ‘green zones’ because of their colour on the zoning maps of the Marine Park), were expanded to cover about one-third of the total Park area.  These green zones previously made up less than five percent of the Park.

The study demonstrated that the Reef’s network of green zones are yielding wide-scale population increases for coral trout, the primary target species of both the commercial and recreational sectors of the hook-line fishery.  It also found that reefs in green zones supported higher numbers of large, reproductively-mature coral trout, even after being damaged by cyclones—such as tropical cyclone Hamish, which hit the reef in 2009.

The findings provide compelling evidence that effective protection within green zone networks can play a critical role in conserving marine biodiversity and enhancing the sustainability of targeted fish populations.

“It’s heartening to know the green zones are working as we had expected,” said lead author Michael Emslie from AIMS. “Among the world’s coral reefs, fishing on the Great Barrier Reef is relatively light but it has still reduced the number and average size of the few fish species that are taken by fishers.  Data since the 1980s show that green zones have been effective in restoring numbers of coral trout to their former levels”.

David Williamson, a co-author from the ARC Centre of Excellence for Coral Reef Studies said “We expected to see some declines in coral trout biomass on reefs that remained open to fishing after the rezoning due to the increased concentration of fishing effort on those reefs, a so-called ‘squeeze effect’. Instead we found that coral trout biomass remained stable on fished reefs in areas that avoided the impacts of Cyclone Hamish, while it increased significantly on green zone reefs. Ultimately it has led to an overall increase in coral trout biomass across those regions. It’s a really positive result for both the fish and the fishery.”

The study suggests that the original Marine Park zoning plan that was put in place in the 1980s began to improve fish stocks, but that the expanded protection in 2004 greatly improved on this. Hugh Sweatman, also of AIMS and co-author of the paper, said “Australia’s Great Barrier Reef Marine Park is looked upon as a benchmark for large-scale reserve networks around the world. Unlike many places where coral reefs are found, Australia is a developed country where fishing is fairly light and well regulated. Yet even here we see clear effects of fishing – the benefits of no-take reserves would be much more obvious where large coastal populations depend on reefs for their daily food, so fishing is more intense and everything is taken.

The details of our findings suggest that effectively protected networks of no-take reserves will help reef fishes cope with some present and future stresses, and assist in maintaining coral reef fish populations as we know them.” 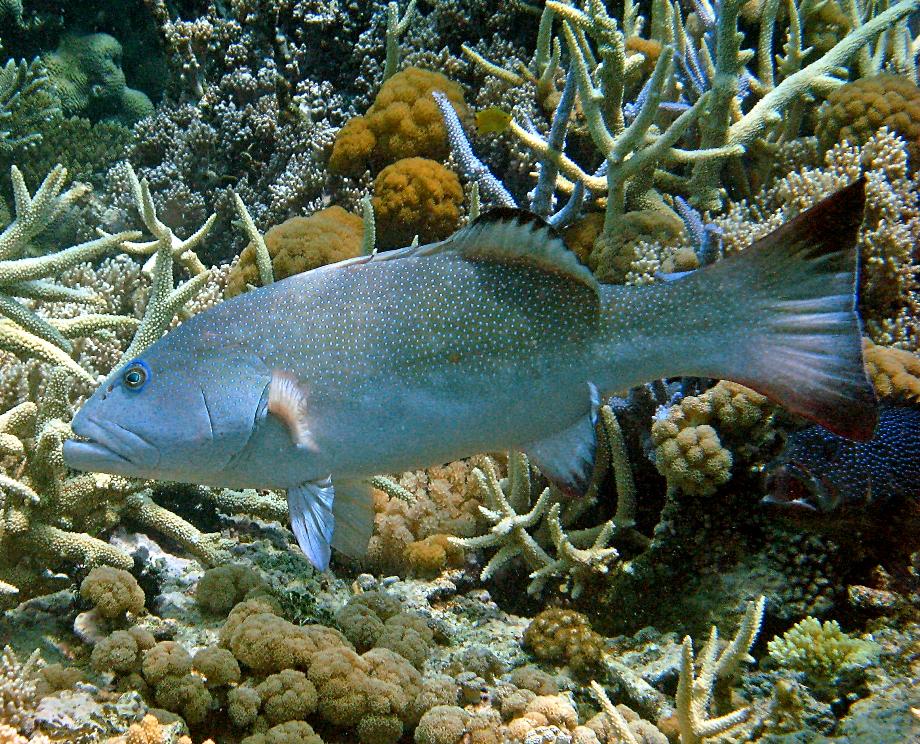 The numbers and size (biomass) of coral trout since the 1980s was on average 2.5 times greater on no-take green zone reefs than on reefs that are open to fishing.

Coral trout biomass has remained relatively stable in areas open to fishing since the early 1980s.

The number of coral trout declined by approximately 50 per cent after tropical cyclone Hamish in 2009, in both green and blue zones. However, coral trout biomass only declined on reefs in blue zones, as reefs in green zones retained more, larger coral trout.

The large breeding coral trout that remained on green zone reefs after cyclone Hamish may aid replenishment of nearby fished reefs where populations were depleted.

The fish species richness (a measure of biodiversity) was slightly higher in offshore green zone reefs than on fished offshore reefs.

Networks of no-take marine reserves (NTMRs) are widely used for preserving exploited fish stocks and for conserving biodiversity. We used underwater visual surveys of coral reef fish and benthic communities to quantify the short- to medium-term (5 to 30 years) ecological effects of the establishment of NTMRs within the Great Barrier Reef Marine Park (GBRMP).

The density, mean length and biomass of principal fishery species, coral trout (Plectropomus spp.), were consistently greater in NTMRs than on fished reefs over both the short- and medium-term. However, there were no clear or consistent differences in the structure of fish or benthic assemblages, in non-target fish abundance, fish species richness or in coral cover between NTMR and fished reefs. There was no indication that the displacement and concentration of fishing effort reduced coral trout populations on fished reefs. A severe tropical cyclone impacted many survey reefs during the study, causing similar declines in coral cover and fish density on both NTMR and fished reefs. However, coral trout biomass declined only on fished reefs following the cyclone.

The GBRMP is performing as expected in terms of the protection of fished stocks and biodiversity for a developed country where fishing is not excessive and targets a narrow range of species. NTMRs cannot protect coral reefs directly from acute or chronic regional-scale disturbances but, following a strong tropical cyclone, impacted NTMR reefs supported higher biomass of key fishery-targeted species, and so should provide valuable sources of larvae to enhance population recovery and long-term persistence.

The Australian Institute of Marine Science (AIMS) is a leading marine research institute in Australia and internationally.  It is based in Townsville. www.aims.gov.au

The Australian Research Council Centre of Excellence for Coral Reef Studies, based at James Cook University (JCU) in Townsville (JCU).  JCU has an international reputation for excellence in marine research. www.coralcoe.org.au 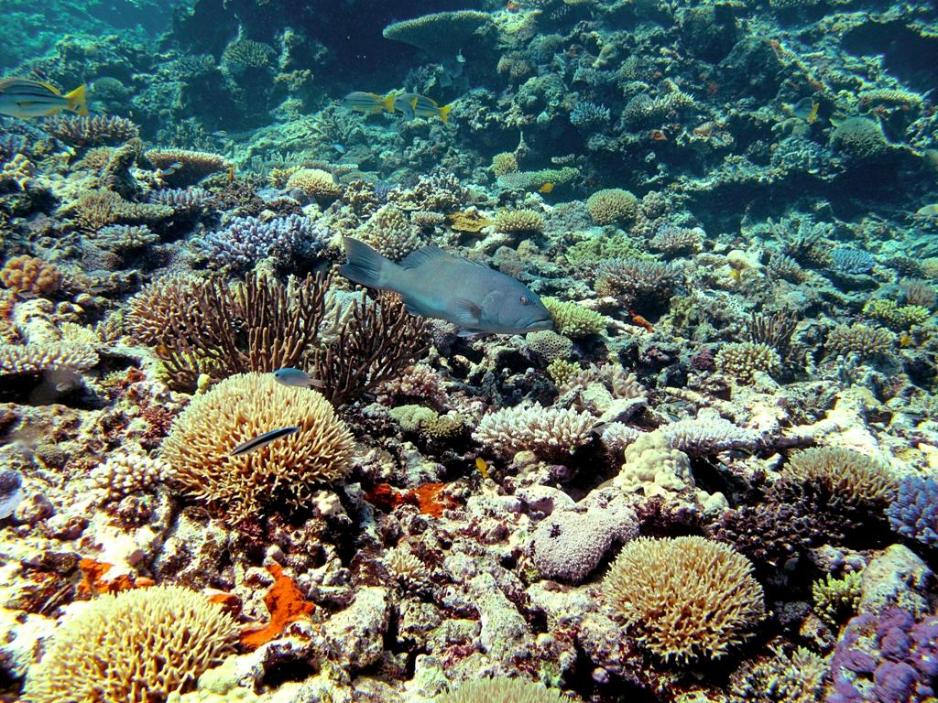 This coral trout (Plectropomus leopardus) was being cleaned by cleaner wrasse and posed for the photo. Image: LTMP © AIMS