This small flock of Galahs were photographed feasting on grass roots and seeds on Saturday afternoon. With pairs and young birds among them they didn’t seem too concerned by our resident bird-watcher. 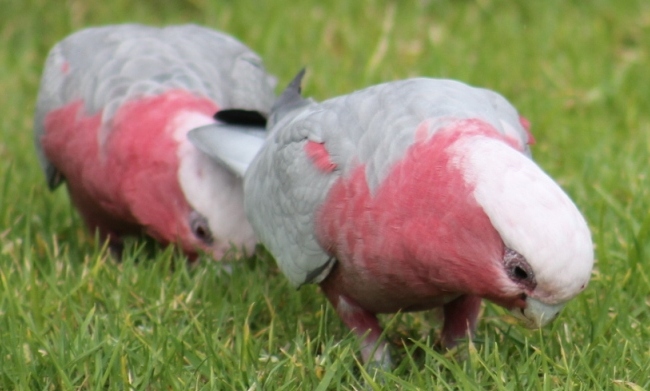 The term galah is derived from gilaa, a word found in Yuwaalaraay and neighbouring Aboriginal languages of southeast Australia. First Known Use: 1862.

Galahs are about 35 cm (14 in) long and weigh 270–350 g. They have a pale grey to mid-grey back, a pale grey rump, a pink face and chest, and a light pink mobile crest. They have a bone-coloured beak and the bare skin of the eye rings is carunculated. They have grey legs. The genders appear similar, however generally adult birds differ in the colour of the irises; the male has very dark brown (almost black) irises, and the female has mid-brown or red irises. The colours of the juveniles are duller than the adults. Juveniles have greyish chests, crowns, and crests, and they have brown irises and whitish bare eye rings, which are not carunculated.

Galahs form permanent pair bonds, although a bird will take a new partner if the other one dies. Like all birds they will display signs of depression if a mate dies prior to forming a new bond. The nest is a tree hollow or similar location, lined with leaves. Both sexes incubate the 2 to 5 eggs in each clutch and care for the young. New young can usually fly after six to seven weeks and will join flocks of other juvenile birds for around four years before pairing off. Galahs have been recorded breeding with other members of the cockatoo family, both in the wild and captivity. These include the Sulphur-crested Cockatoo, C. galerita. The voice is a distinctive high-pitched screech, 'chi-chi' which will increase if distressed or annoyed. Soft snuffling calls and facial grooming accompany courtship. They will live for 30 years in the wild and have been known to live for up to 80 years as pets. Known to be highly intelligent, social birds they will imitate humans voices when hand reared.

Galahs are classified, along with Major Mitchell's Cockatoo, as an early divergence from the white cockatoo lineage which have not completely lost their ability to produce an overall pink (Major Mitchell's) or pink and grey (galah) body plumage.

"Galah" is also derogatory Australian slang, synonymous with 'fool' or 'idiot'. Because of the bird's distinctive bright pink, it is also used for gaudy dress or to refer to someone who likes to ‘show off’.

The Galah, and Oolah the Lizard 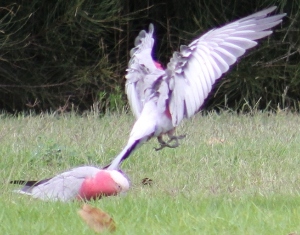 OOLAH the lizard was tired of lying in the sun, doing nothing. So he said, "I will go and play." He took his boomerangs out, and began to practise throwing them. While he was doing so a Galah came up, and stood near, watching the boomerangs come flying back, for the kind of boomerangs Oolah was throwing were the bubberahs. They are smaller than others, and more curved, and when they are properly thrown they return to the thrower, which other boomerangs do not.

Oolah was proud of having the gay Galah to watch his skill. In his pride he gave the bubberah an extra twist, and threw it with all his might. Whizz, whizzing through the air, back it came, hitting, as it passed her, the Galah on the top of her head, taking both feathers and skin clean off. The Galah set up a hideous, cawing, croaking shriek, and flew about, stopping every few minutes to knock her head on the ground like a mad bird. Oolah was so frightened when he saw what he had done, and noticed that the blood was flowing from the Galah's head, that he glided away to hide under a bindeah bush. But the Galah saw him. She never stopped the hideous noise she was making for a minute, but, still shrieking, followed Oolah. When she reached the bindeah bush she rushed at Oolah, seized him with her beak, rolled him on the bush until every bindeah had made a hole in his skin. Then she rubbed his skin with her own bleeding head. "Now then," she said, "you Oolah shall carry bindeahs on you always, and the stain of my blood."

"And you," said Oolah, as he hissed with pain from the tingling of the prickles, "shall be a bald-headed bird as long as I am a red prickly lizard."

So to this day, underneath the Galah's crest you can always find the bald patch which the bubberah of Oolah first made. And in the country of the Galahs are lizards coloured reddish brown, and covered with spikes like bindeah prickles.

Two females; one at front is a juvenile. Femails have red to brown eyes. 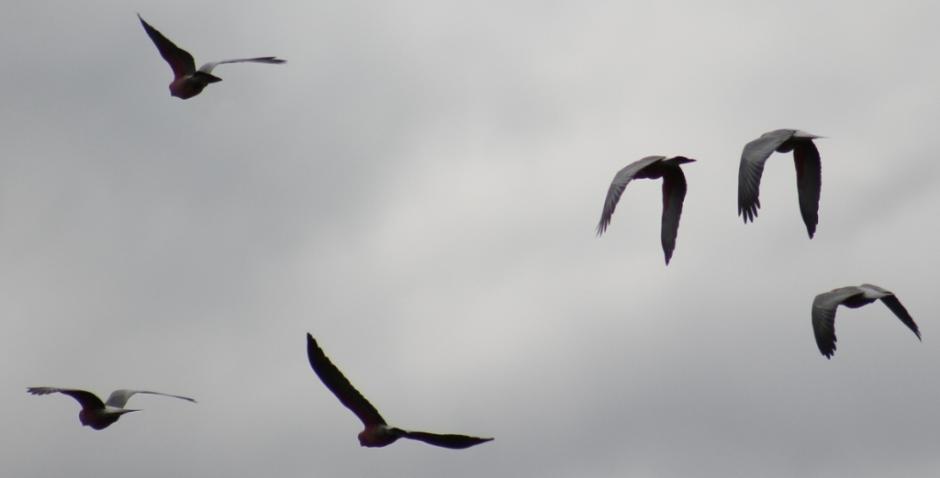