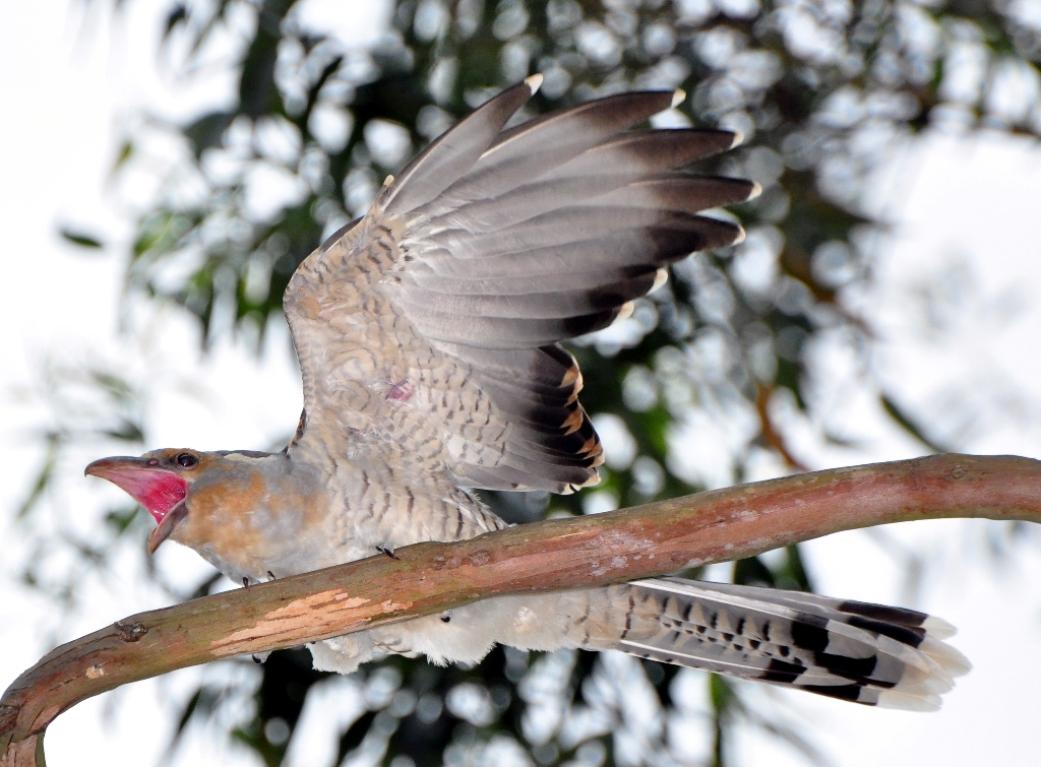 Above: Fledlgling Summer of 2013, picture by Jeffrey Sabri.

These great photographs were taken in the past few days by Bayview residents Andrew Tiede and Jeffrey Sabri (aged 16). Most of us would be accustomed to hearing the raucous sounds of protest of cuckoos or koels calling as Spring and Summer arrive and this time of year ensures all will hear and see these beautiful birds.

The pictures of a currawong feeding the cuckoo, a juvenile, illustrate part of the bird world which is reflected in our human world; the ability of those of another family housing, raising and feeding young that are not their own.

'Thanks mum' picture by Jeffrey Sabri.

The Channel-billed Cuckoo (Scythrops novaehollandiae) is a species of cuckoo in the Cuculidae family. It is monotypic within the genus Scythrops. The species is the largest brood parasite in the world, and the largest cuckoo. Migrating Channel-billed Cuckoos begin to return to Australia in October and leave in February through March, returning to New Guinea and even as far as Timor. The Channel-billed Cuckoo is the world's largest cuckoo, measuring between 58–66 cm (23–26 in) long and weighing between 550–930 g (19–33 oz). The bill is bi-coloured, with a grey base becoming straw-coloured at the tip. The bill is large slightly curved and reminiscent of the bills of hornbills. The juvenile is similar to the adult but has pale tips to the feathers of the wings, and the rest of the plumage is buff instead of pale grey. The bill is less massive and dirty pink in colour, and the skin around the eye is not red.

The Channel-billed Cuckoo lays its eggs in the nests of the Australian Magpie, Gymnorhina tibicen, the Pied Currawong, Strepera graculina and members of the crow family (Corvidae). Unlike many other cuckoos, the young birds do not evict the host's young or eggs from the nest, but simply grow faster and demand all the food, thus starving the others. Often the adult female will damage the existing eggs in the nest when she lays her own and she may even lay more than one egg in a single nest.

Cuckoo being fed by Pied Currawong, picture by Jeffrey Sabri.

Like the closely related koels, fruit forms a major part of the diet of Channel-billed Cuckoos, as well as insects. The only member of the genus Scythrops, the Channel-billed Cuckoo was first described by ornithologist John Latham in 1790. Its generic name is derived from the Ancient Greek skuthro-/σκυθρο- 'angry' or 'sullen', and ops/ωψ 'face', 'eye' or 'countenance'. The specific epithet novaehollandiae means of New Holland, hence Australian.
From: Channel-billed Cuckoo. (2012, December 1). In Wikipedia, The Free Encyclopedia. Retrieved from http://en.wikipedia.org/w/index.php?title=Channel-billed_Cuckoo&oldid=525784278

Cuckold derives from the cuckoo bird, alluding to the alleged habit of the female bird in changing its mate frequently and authentic practice of laying its eggs in other nests within its community. The association is common in medieval folklore, literature, and iconography. The original old English was "kukewold". It was borrowed from Old French "cuccault", which was made up of "cuccu" (old French for the cuckoo bird itself) plus the pejorative suffix – "ault", indicating the named person was being taken advantage of as by a cuckoo bird. Similarly the term ‘a cuckoo in the nest’ indicates or implies a parent who may be raising a child who is not their own.

Cost of the hosts
Given the detrimental effects avian brood parasites can have on their hosts' reproductive success, host species have come up with various defenses against this unique threat. Given that the cost of egg removal concurrent with parasitism is unrecoverable, the best defense for hosts is avoiding parasitism in the first place. This can take several forms, including selecting nest sites which are difficult to parasitize, starting incubation early so they are sitting on the nests when parasites visit them early in the morning, and aggressive territorial defense, which is why you may see a cuckoo pursued by a flock of other birds, seeking to drive it away. Birds nesting in aggregations can also benefit from group defense.

Not all cuckoos have an inability to raise their own young though (1);

Among the cuckoos (family Cuculidae), 53 of the 136 species are obligate brood parasites and always lay their eggs in the nests of other species, which act as hosts, incubating the parasite's eggs and then raising the parasitic chicks to independence. The other 83 cuckoo species raise their own young, just like normal nesting birds (Payne, 1997). Cuckoo-host interactions have proved to be a good model system for studying coevolution (Davies, 2000; Rothstein, 1990). Hosts have evolved defenses in response to parasitism (aggression against the parasite, egg rejection), whereas cuckoos, in turn, have evolved tricks to beat host defenses (secretive laying, egg mimicry). 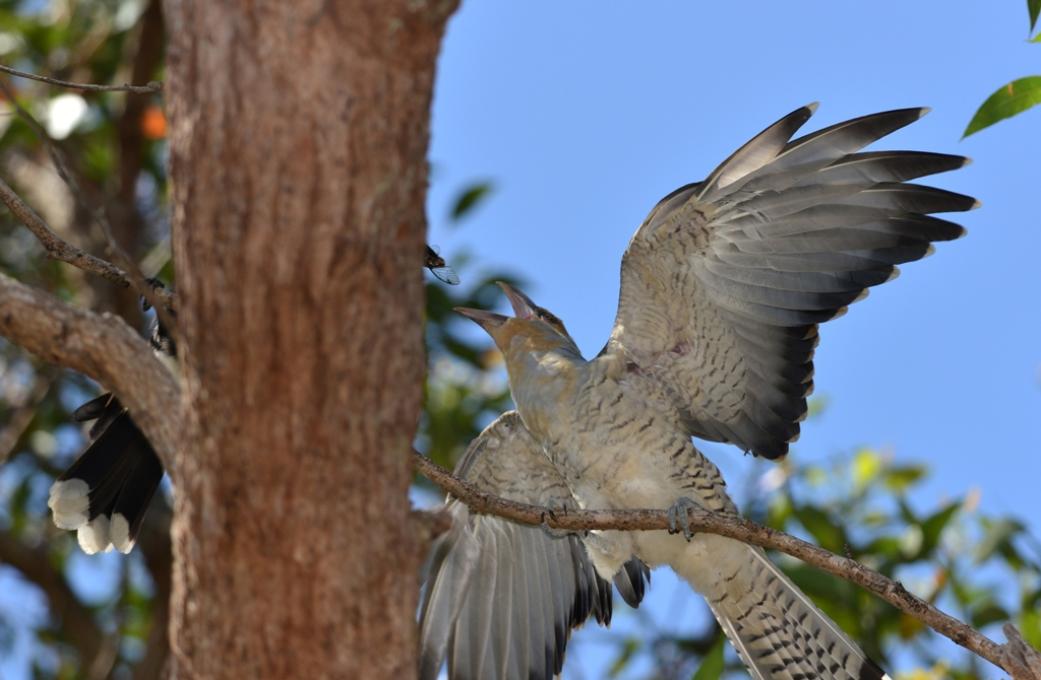 Above and Below: Channel-billed Cuckoo feeding, pictures by Andrew Tiede 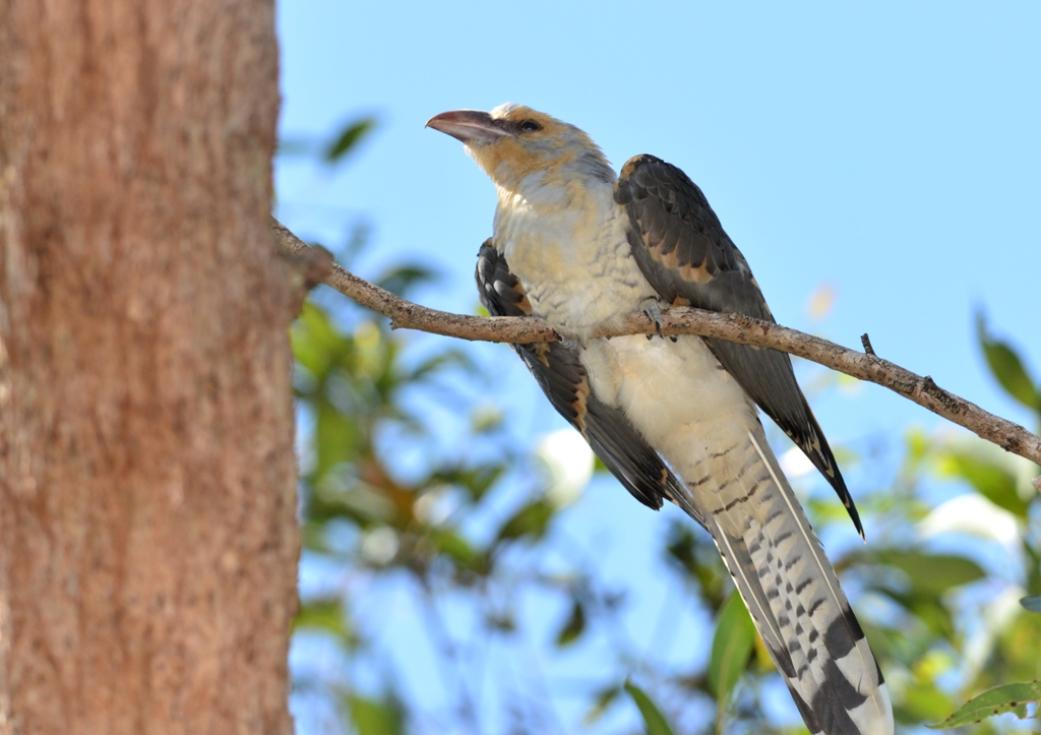 by Jeffrey Sabri and Andrew Tiede, 2013.