On Thursday afternoon (24.1.2013) a huge flock of Little Black Cormorants were seen fishing off Palm Beach, clearly having found a school of fish and sticking their wings up to close our January-Summer 2013 Saltwater mix with a sea bird. The Huon class minehunter HMAS Huon (M 82) is the RAN ship you can see in the background heading up the coast beyond Barrenjoey headland.

The Little Black Cormorant (Phalacrocorax sulcirostris), called the Little black Shag in New Zealand, is common in all states and inland areas where fish may be founding lake, rivers and streams. Once hunted by early settlers and even into the 1920’s due to their ability to fish rivers and lakes, these birds are common throughout Australia. They are around sixty centimetres long, and is all black with blue-green eyes and one of only two totally black cormorants in Australia, with the other being the much larger (70 cm - 90 cm)Great Cormorant, P. carbo.

The Little Black Cormorant was originally described by Johann Friedrich von Brandt in 1837. Its specific epithet is derived from the Latin words sulcus "groove", and rostrum "bill". Their backs have a greenish sheen. In their breeding season (Spring or Autumn), white feathers appear about the head and neck, with a whitish eyebrow evident. The plumage is a more fade brown afterwards. Males and females are identical in plumage. The long slender bill is grey, and legs and feet black. The iris of the adult is green and the juvenile brown. Immature birds have brown and black plumage like those seen at Palm Beach.

The Little Black Cormorant ranges from the Malay Peninsula through Indonesia (excluding Sumatra) and New Guinea (including the D'Entrecasteaux Islands) and throughout Australia.

It is strongly aquatic, seldom being seen on dry land, but is often seen resting on rocks, jetties and other perches in water.  The Little Black Cormorant feeds on fish, crustaceans and aquatic insects. It catches prey underwater, by diving and swimming using its large, fully webbed feet for propulsion. It has special nictitating membranes that cover and protect the eyes underwater. As their feathers are not waterproof, cormorants are regularly seen perched with their wings outstretched to dry after fishing. Considered more gregarious than other cormorants, the Little Black Cormorant can be found in large flocks. Groups sometimes fly in "V" formations.

Their nests are a small platform built of dried branches and sticks in the forks of trees that are standing in water and are often located near other waterbirds such as other cormorants, herons, ibis, or spoonbills. Three to five (rarely six or seven) pale blue oval eggs measuring 48 x 32 mm are laid. The eggs are covered with a thin layer of lime, giving them a matte white coated appearance. They become increasingly stained with feces, as does the nest, over the duration of the breeding season. Both sexes share nest-building, incubation and feeding of the young. They are nomadic, leaving coastal habitats when inland waters are plentiful.

Lindsey, T. R., The Seabirds of Australia. Angus and Robertson, and the National Photographic Index of Australian Wildlife. Sydney. 1986 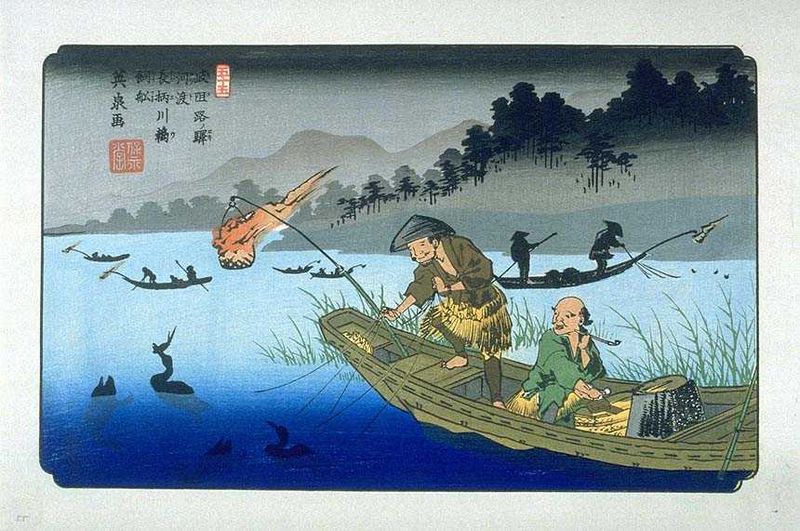 Keisai Eisen's print of cormorant fishing on the Nagara River during the Edo period. The Edo (capital of Japan now Tokyo) period or Tokugawa period was between 1603 to 1868 in the history of Japan. Cormorant fishing was a traditional fishing method in which fishermen used trained cormorants to fish in rivers. Historically, cormorant fishing has taken place in Japan and China from around 960 AD. Today this display is used mostly to entertain the tourist industry in China.