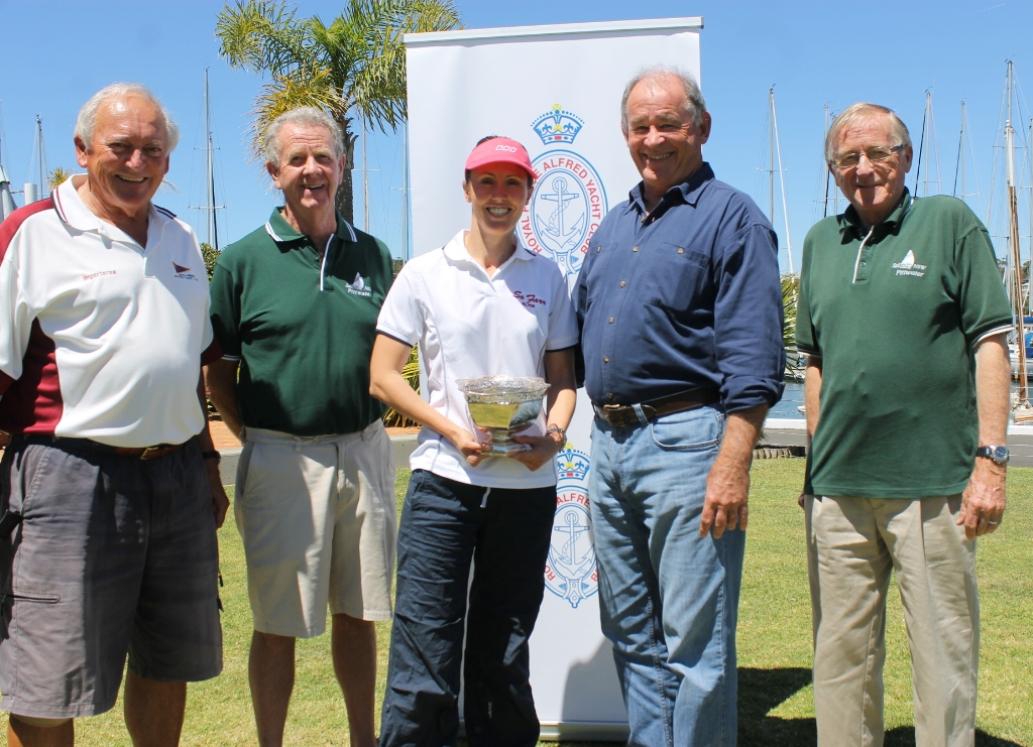 Two weeks ago we received a message from Robert Bennett, RPAYC member and sailor:

My yacht “SoFarr” with crew member Linda Buchan, a disabled sailor and a gutsy lovely girl, were the inaugural winners of the perpetual trophy in the Island Race today.

Fantastic, congratulations! was our reply – and then; “did you get a picture of Linda and you with the trophy?”

Someone did, apparently, and then disappeared back into the large crowd that gathered to support this event or participle in the Islands Race. The trophy itself was away from the club being engraved with the credit due, the usual practice post-race.

In the meantime we spoke with Linda;

How long have you been sailing?

What do you enjoy about it?

I just love the freedom that I get on the water and the fun and people that I have met.

Do you only go on Bob’s yacht?

No, I sail with Sailability as well. I sail in the little dinghies with them. It’s great fun when I’m racing people, especially the volunteers. They give up so much time for us, they are very special people.

How do you put up with Bob?

It was great. I was just saying to Bob earlier I haven’t won anything for 15 years and to finally win something it was quite exciting. The guys don’t really care about winning or losing but I was ‘yay!’. It was very good.

So did your crew get awarded a trophy?

Bob: Yes, last Sunday we had that. Every person that sailed received a bottle of wine and Linda received a voucher as well. The trophy, which shall be a perpetual trophy as log as the series continues, is being engraved with our names.

As crew on SoFarr – what were you doing during the Two Islands race?

At first I was just observing for Bob for three or four weeks. Last Sunday I steered for around a quarter of an hour and then I was on the main sheets for the rest of the race.

Bob: She had this gorgeous bloke called Andrew Gavenlock who is a sailmaker, very strong and very fit and what happened is Andrew and Vera Pickering, who is a Vet. from Mona Vale, actually sailed the boat and we just sat back and watched, talked about other things and then all of sudden the race was finishing.

Did you have to sail around Lion Island?

No we just sailed to a buoy on the Pittwater side of the island and came back – it was pretty straight forward. We started from Scotland Island.

Bob: Years ago there was a three island race – it used to go around Scotland Island, around Lion Island and then around Dangar Island up the Hawkesbury. This version is making it an easier race and faster for those entered.

Bob Bennett’s yacht SoFarr, is known as being a ‘serial nuisance’ in races at RPAYC, especially in the offshore races apparently, and has a nickname of ‘BLRB’ , which has now been formed into a mini yacht club by SoFarr crew members and stands for (the) ‘Bloody Little Red Boat’ yacht club. With this knowledge in mind, and with Bob attesting to his ‘laid back’ stance through much of the race, we were curious as to how he came first, even with Linda’s excellent help;

Bob: Before the start of the race I happened to be over there talking to all the powers that be who were organising the handicaps – they harangued you, threatened you with terrible things to induce you to hand over money. Being a man of great integrity, I refused outright and made myself as difficult as possible. Then I looked under the tables and saw all these little brown paper bags that had a musty smell emanating form them.

I said to the officials – ‘what are all these brown paper bags?’ – as it turns out, some of them were stuffed with money. So I relented, handed them fifty dollars and that got us five minutes off our handicap.

When the race started there were all these boats behind us, many of them yelling out good naturedly “Why are you sailing?!!” and so I yelled back “We’ve invested!!”

(…and sat back and let Linda, Andrew and Vera do all the work)!

What do you think of the Inclusive ‘Integrated disAbled Sailing’ Program launched by the RPAYC?

Linda: I think it’s amazing. At the Gala Dinner on the Saturday night details of upcoming plans were announced as well as a little about the 35 foot boat that Dan Fitzgibbons is trying to get up and running. But the part I love is the Integrated Sailing – which is encouraging people with disabilities to sail in the Competition.

Linda also had a quiet word when Bob was out of earshot, explaining Mr Bennett has spent a lot of time with her over the last six months teaching her all he can about sailing, "Bob has done so much for me. He tries not to let other people know but he has."

In Linda's opinion Bob is a wonderful person who has done so much for her and others, and she wants this acknowledged. Bob is always, in our experience, doing something for someone somewhere and threatens litigation if we let anyone know, putting it down to a simple wish to give back, to invest something into community now that he can – so please don't mention this report when you see him next.

Linda and Bob with Perpetual Trophy - see the 'BLRB' on Linda's crew shirt for SoFarr.

During the week Bob, Linda and three gentlemen from Sailability Pittwater kindly consented to let us re-photograph the trophy and themselves (above). The RPAYC has a long association with supporting the great work of Sailability Pittwater which continues to this day. Coach Keith Sinfield pointed out their vessels are still moored in Crystal Bay at Newport and exercises and training regularly occurs from the club as well as their Bayview base. Allan Jones, Commodore of Sailability Pittwater stated this new initiative by RPAYC was brilliant and that they were delighted with the opportunities it will provide for more people to experience Freedom On The Water.

Mr Jones also let us know there are a few exciting opportunities coming up for our local Sailability sailors with Alyse Saxby heading down to Victoria to compete soon and next year the Sailability Hiroshima Peace Cup (7th and 8th Sept 2014) may see some of our local sailors venturing to Japan.

RPAYC’s Damian Devine reports that it was a good day and over $20,000 was raised on the weekend. The results for all vessels are below:

Integrated disAbled Sailing is an initiative of the Royal Prince Alfred Yacht Club which integrates sailors of all abilities.  Funds raised are to purchase, modify and maintain a keel boat which can be sailed in the Club's regular racing program by sailors of all abilities.  Funds will also be raised to assist sailors with a disability to further their competitive abilities in the sport and attend competitions while also providing financial and continued in-kind support to Sailability.

IdS is a new initiative that gives sailors of ALL ages and abilities the opportunity to participate in the Club’s sailing activities. The program will promote and support inclusivity for all keen sailors, by integrating sailors with disability in the regular RPAYC racing fleets as well as providing support for the not for profit, volunteer based Sailability organisation.

To integrate sailors with disabilities into regular, inclusive for all, club racing events.

To support Sailability and its activities in introducing people with disabilities to sailing.

To provide support, coaching, training and high performance development to prepare for and compete in events.

Royal Prince Alfred Yacht Club aims to do this by:

The acquisition, modification and maintenance of a keelboat vessel which can then be easily modified to accommodate sailors with disabilities

Encouraging club sailors to compete with (or against) and/or provide volunteer support to sailors with disabilities, with their classes.

Supporting competition for sailors with disabilities such as attendance at regattas and hosting of regattas.

Fundraising will be primarily through events, donations and sponsorships in addition to grants from the Government, Yachting Australia and Clubs NSW. The RPAYC has applied for a grant through the Australian Sports Foundation (ASF) for the IDS Program, which will mean that your donation will be tax deductible. 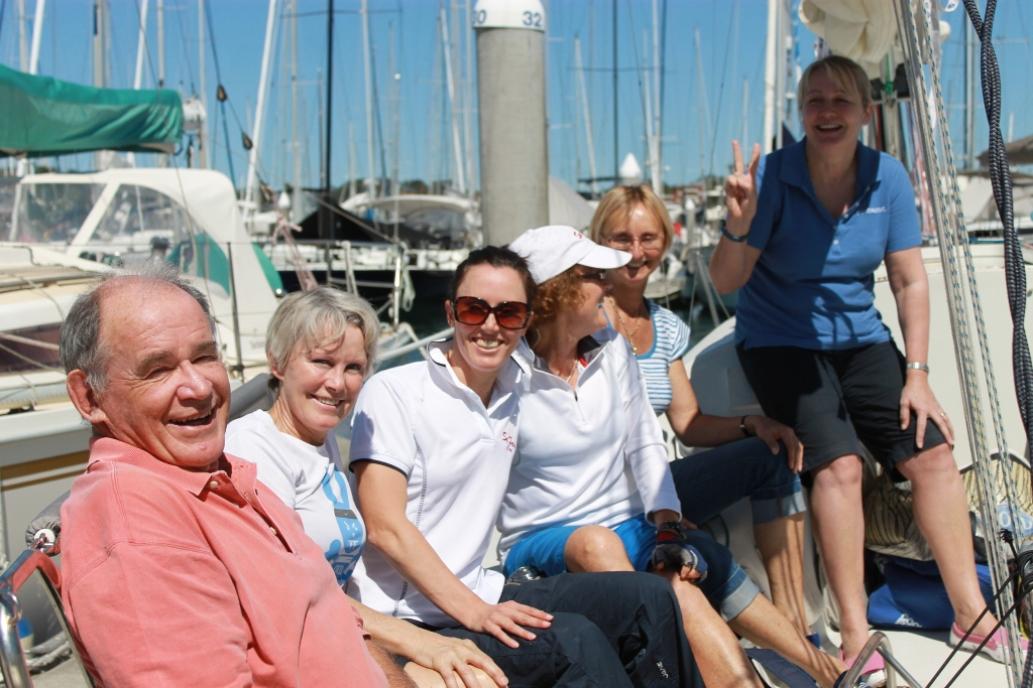