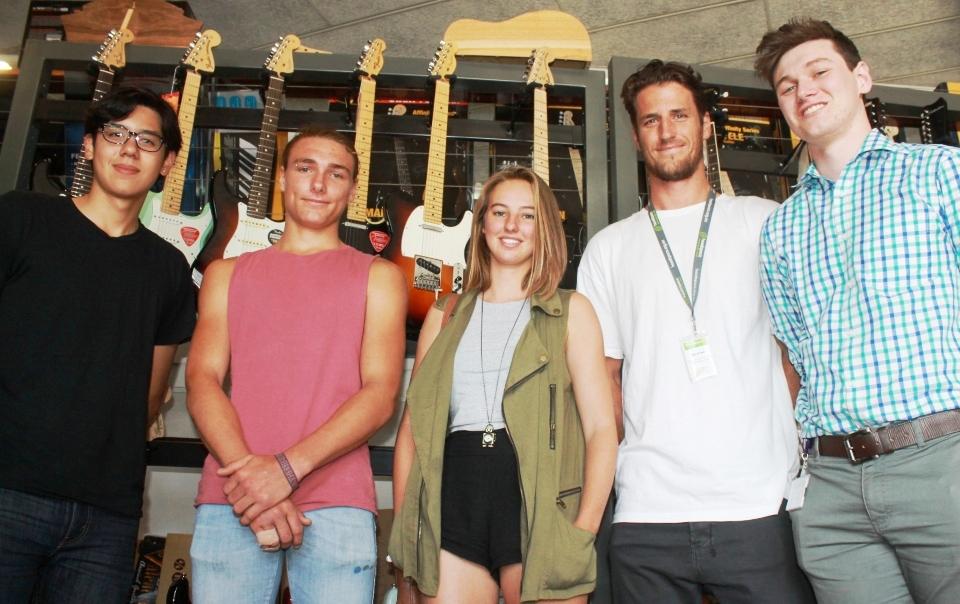 On Monday this week, January 11th, the Pittwater Youth Facebook page announced entries are open for the 2016 ShoreShocked Music Festival Battle of the Bands Competition (entries close January 31st) and on Wednesday details about a ShoreShocked Beaches Album Cover Competition (entries close February 5th) for those who like dabbling in painting or photography or many other mediums was opened.

Youth Week (April 8-17, 2016) is set to be bigger and better in Pittwater this year too with Village Park at Mona Vale hosting all sorts of activities such as music, movies and an inflatable wave for great fun and yes, there will be another Skate Comp. this year which will actually comprise three Skate Comps across Manly, Warringah and Pittwater. We’ll bring you further details as received.

On Friday we met some of the great people behind ShoreShocked at Mona Vale Music and two of the new Youth Consultants called for last year – you probably remember the Notice we ran in the Youth page. Council were inundated with people applying for this and ended up interviewing over 50 of you in all!

The twelve Youth Consultants now in place meet monthly for 2 hours in Mona Vale Library to provide guidance, ideas and to help develop events for young people. This is a paid position. They are supported by 26 volunteer members from the Mona Vale skate park working group which provided advice, recommendations and local knowledge to Council on behalf of skateboard, BMX and scooter users.

Pittwater Youth Consultants Evan Yii and Josh Wijnen, along with headspace Brookvale’s Dan Brown and Jess Lawson and Andrew Marselos from Pittwater Council’s Youth & Families Community Team spoke about the upcoming Battle of the Bands and being a Youth Consultant for Pittwater.

Evan stated he wanted to be part of the Youth Consultant team as he is a member of tour  youth population and that it’s important to help engage others in the community as there is a lot of potential and a lot of talent that may be realised if supported and given direction.
Josh said he simply wanted to help represent the people who don’t usually get represented, to give them a voice.

Dan Brown and Jess Lawson will be at ShoreShocked Music Festival Band Competitions and the Youth Week events. headspace Brookvale provides services to young people aged 12-25.  If you are a young person looking for health advice, support and/or information,headspace Brookvale can help you.

So what to expect this year? – from the ShoreShocked Facebook page
“Over the past 6 years we’ve had the pleasure of bringing some of the best heavy bands in the country. From Northlane and Carpathian to Graves and Hand of Mercy we’ve had a blast tearing up St Leonards Oval and providing the biggest and best all ages heavy music festival this side of Sydney.

In 2016 Shorefest will be moving back to being a rock/alternative/indie music festival. Out of respect for what we did with Shorefest the name will be changing back to Shoreshocked. We can’t wait to drop the line-up for Shoreshocked 2016 and bring you some of the best new bands around. Peace. The Shorefest Committee. – “ posted January 6, 2016

Northern Beaches Band members are invited to perform at Mona Vale Memorial Hall on 12 February from 6pm, with Northern Sydney Bands having the opportunity to battle it out at Chatswood Youth Centre on 19 February.

All band members must be aged 12-25 years of age and live on the Northern Beaches or North Shore area, with seven bands being chosen to play at each of these locations. All styles of music are encouraged to apply.

Submissions will be judged by a panel from the ShoreShocked Organising Committee.

Bands wishing to participate are requested to submit their entry online by 31 January at www.pittwater.nsw.gov.au/battle providing examples of their music and a brief biography, with entry to the competition free.

For those wishing to watch the bands they can pre-book tickets online for $5 at www.pittwater.nsw.gov.au/battle or pay $10 at the door (if not sold out). The ticket includes a drink and burger.

The event has been generously supported by Jason Mannell and Gavin Leach from Mona Vale Music, who will be supplying equipment and prizes.
Jenny Walsh from Northern Beaches Youth Bands is assisting with promotions.

The Pittwater Youth & Families Team are proud supporters of headspace Brookvale who will be running the BBQ for the event.
All ages are welcome to this drug and alcohol free event. For more information call 9970 1634.

SHORESHOCKED 2016 - BEACHES ALBUM COMP
Hit us up with your best album cover and get the chance to win some prizes. Keep it original and get them creative juices pumping. Take a selfie, get the paint brushes out, or whip out the camera. It can be your band, your mates face, the waves or a cup of tea. Whatever you need to make that album art shine…All you need to do is put “Shoreshocked 2016” on there somewhere and you’re good to go.
How to enter:
Simply jump on and upload a picture of your masterpiece to our Facebook page
OR
On Instagram by tagging us @youth_pittwater with the hashtag‪#‎beachesalbumcomp‬
The Top 5 Album Covers will be posted on the event page for a people’s choice vote
https://www.facebook.com/events/896736007099965/
Opening Date: 12th Jan 2016
Closing Date:5th Feb 2016
Prize: $100 gift card

headspace Brookvale provides services to young people aged 12-25.
If you are a young person looking for health advice, support and/or information,headspace Brookvale can help you with:
Mental health
• Physical/sexual health
• Alcohol and other drug services
• Education and employment services
If you ever feel that you are:
• Alone and confused
• Down, depressed or anxious
• Worried about your use of alcohol and/or other drugs
• Not coping at home, school or work
• Being bullied, hurt or harassed
• Wanting to hurt yourself
• Concerned about your sexual health
• Struggling with housing or accommodation
• Having relationship problems
• Finding it hard to get a job

Or if you just need someone to talk to…
headspace Brookvale can help! The best part is our service is free, confidential and youth friendly.

headspace Brookvale is open from Monday to Friday 9:00am-5:30pm so if you want to talk or make an appointment give us a call on (02) 9937 6500. If you're not feeling up to contacting us yourself, feel free to ask your family, friend, teacher, doctor or someone close to you to make a referral on your behalf.