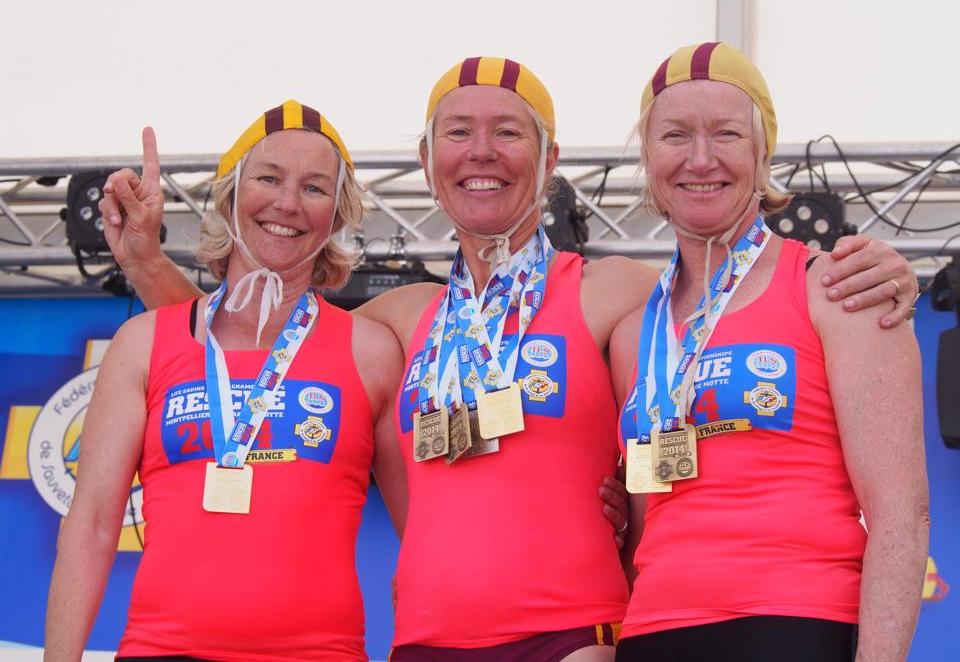 Day 1 of National Teams Ocean and Beach Events concluded 1.30am Australian Time, Sunday 21st of September with Day 2 to come later today, 5p.m. our time - the Australian Open men and women in the Finals coming in first in Rescue Tube, Board Rescue, with either New Zealand or host nation France on their heels. The Italian and German team members have also been among points collectors so it's going to be a very exciting final day for the Opens competition with a few breaths held back here.

Results for the Masters sees Eva Channells, Lise Barry and Christine Hopton from the Newport/Avalon Masters brightening everyone's week - and Avalon's Chris McGuckin collecting bronze in the board race and a 4th in the ironman, while Queenscliff's Masters Team have won so many medals in sprints, flags they will be coming home heavier even without all that wine and cheese. Collaroy Surf Lifesaving Club's Ross Langbein won Gold in the beach sprint, Dee Why's ski relay team the Bronze. Surfboat Results were still not listed this morning (2:14am Sunday 21st) - too much excitement perhaps?

It is this passion that will save lives on patrolled beaches this Summer.

On the Masters Day 1 Christine Hopton and Lise Barry won World’s Bronze in the Board Rescue, Chris came 4th in ski while Lise added a Bronze in the board, 5th in Ironwoman and a Silver in the ski. On Day 2 the ladies decided to go one better and collected Gold in the 150 years Ski Relay with Eva Channells.

“Thanks to my team mates Lise Barry and Eva Channells,” the President of Avalon Beach SLSC said after the win,  “great work in really tough conditions - extremely windy and tricky surf - many didn't even make it round the course.”

Further north of us the Terrigal and Avoca Surf Clubs have been collecting Gold, Silver and Bronze while Branch clubs further south have also made Sydney's Northern Beaches Surf Lifesaving Masters Teams a stronghold of World Championship medals.... the list is as long as all those who went.

The Youth and Open Team report up until we lost just a little sleep watching the Live Stream from a flat swell beach courtesy of SLSNSW:

Aussies circling the Black Fins after SERC silver at Montpellier

Australia will go into the final two days of beach competition at the World Life saving Championships, Rescue 2014 at Couchant Beach, La Grande Motte, 74 points behind defending champions New Zealand after a vital silver medal in the final event in the Antigone Olympic Pool, Montpellier yesterday.

Shannon Eckstein, Tim Schofield, Ryan Napoleon Andrew Bowden grabbed a silver in the 4x25m Manikin Tow Relay behind Germany with both teams swimming under the old world record in a thrilling final event on the program. The Aussie boys setting a new Australian record!

They will also be buoyed by the eight-gold medal haul by the Australian Youth team that blitzed all-comers in the two days on the beach and included a total of seven gold to Sydney’s latest star Georgia Miller, to wrap up their beach campaign.

The Australian SERC team (Simulated Emergency Response Competition), led by Shannon Eckstein, included experienced trio Andrew Bowden (Bronte SLSC/The Hills LSC), Christina Ruiz (Northcliffe SLSC/RLSS Qld)  and Pamela Hendry (Maroochydore SLSC/Brisbane Lifesaving). The team were hunting for their fifth straight victory in this event but had to settle for silver behind a French team that has shown the world they mean business in the chase for overall honours with Germany taking third place.

France will take a lead of 100 points into the two-day beach competition ahead of New Zealand, Germany with Australia in fourth.

But importantly in Australia’s points chase, they have picked up 14 valuable points on the Kiwis, who were 13th overall in the SERC.

Instead of behind 88 points down, they are now 74 which is still a monumental task.

“In rugby league terms, it’s like being 30 points down and scoring a vital try just before or after half-time,” said Australian Head Coach Danny Short.

Short has revealed he is now considering using Olympian Ryan Napoleon in the water events with the Currumbin Beach Vikings/RLSS Qld recruit and Olympian coming into contention for Australia’s surf race and rescue tube rescue events.

The Australians will start with its big guns first up on the beach with four-time Australian single ski champion and K2 World Championship kayak silver medallist Lachlan Tame lining up alongside the versatile Eckstein in the single ski.

Tame, a prospective Rio Olympian, has developed into a valuable component in Short’s plans and will play an important cog in an Australian wheel that will have to hit overdrive if they are to catch the determined Black Fins of New Zealand.

The Avoca Beach paddler will also line up in the board, the beach sprint, flags, beach relay and Oceanman (Taplin) Relay.

For the girls it will be room mates Olympian Naomi Flood (Manly LSC) and five-time Australian representative Kristyl Smith (Northcliffe) who will be first up for the Australians on the board.

“It’s great to have such swimming talent as Ryan Napoleon waiting in the wings; it just shows you how much depth we have in our swimming ranks,” said Short.

“It’s going to be a challenge for us but we are up for it and I know the team is ready to do whatever it takes to push the Kiwis to the limit.”

Meanwhile the next generation showed that come 2016 they will be ready to step up to the mark and push for positions on the National Team after a second day of dominance on the beach by the Youth team.

Eight gold medals from 10 events – including a total of seven gold over two days to Newport’s latest recruit Georgia Miller who added gold in the Women’s Oceanman, Oceanman Relay and individual surf and single ski races to her opening day wins in the board race, board rescue and rescue-tube-rescue.

The future is looking very, very bright for coach Brett Dowker’s amazing Youth Team! You will see these faces and hear these names a LOT more in coming years. An amazing day for generation next saw five 1-2 finishes to the young Aussies.

Here is a run down of “Domination Day” at La Grande Motte:

There was a 1-2 finish to Australia in women's Youth surf ski with Georgia Miller taking gold ahead of Prue Davies (Currumbin SLSC/RLSS Qld) in a stunning quinella.

Another 1-2 for in the men's surf race with gold to Dan Collins (Redhead) & silver to Brad Woodward (Shelley Beach, NSW/The Hills LSC).

Gold to Josh Brown (Byron Bay) in the single ski with Daniel Collins back in 5th in a tight group finish.

Gold and silver to Georgia Miller and Chelsea Gillett (Maroochydore/Brisbane LS)  2nd who blitzed the field in the women’s surf race.

An unbelievable sixth gold for Georgia Miller in the Oceanwoman. What a champion, who scooped the medals.

Gold for Australia ahead of South Africa and New Zealand in the Oceanwoman (Taplin) Relay and; Gold to Australia in an Amazing effort in a tight win over NZ in the Men’s Oceanman (Taplin) final. 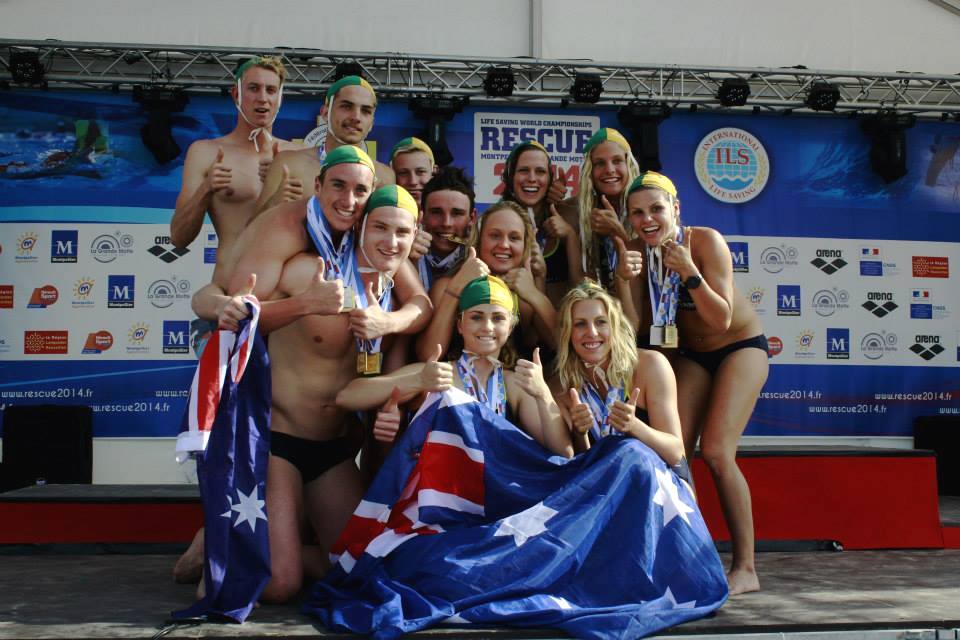