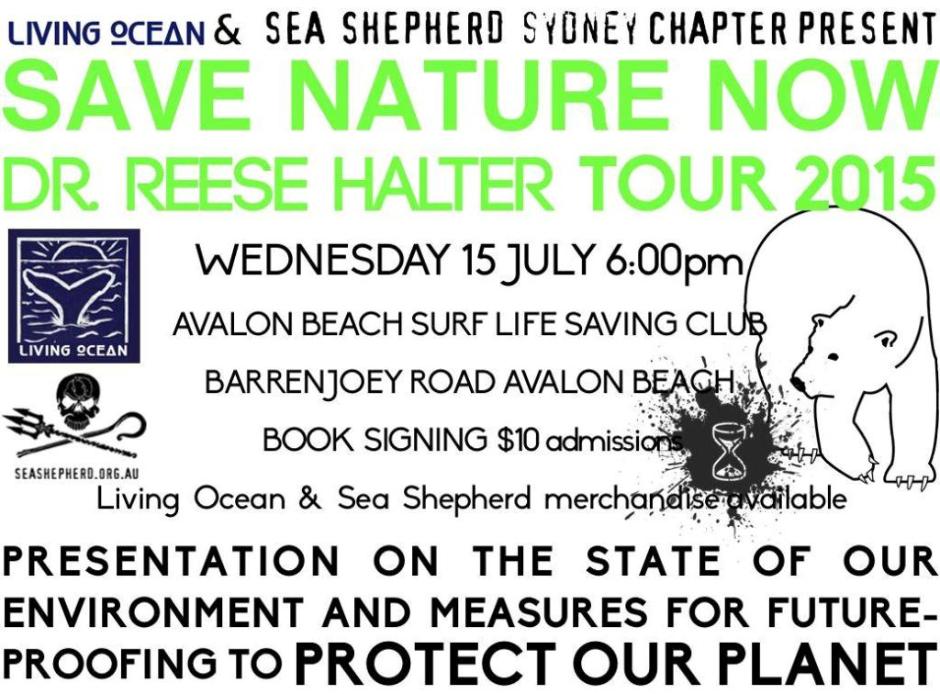 A very special gentleman is coming to Pittwater in a few weeks as part of his SAVE NATURE NOW TOUR 2015. Dr Reese Halter will be speaking at Avalon Beach SLSC on Wednesday July 15th.

This week we share a small insight into one of our planet’s most vocal and articulate voices for ensuring our planet survives what many recognise as a crucial time to Save Nature Now! 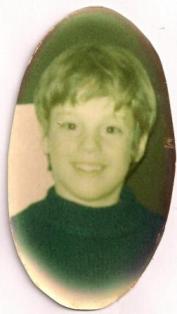 When were you born?
I was born on the Northern Plains a little over 40 years ago.
From the very get-go forests and the oceans were in my blood.

What and where were you sailing?
I learned how to sail one-man Lasers at a young age. Lasers go anywhere especially on the top of a ute so I’d go sailing mostly on the Pacific West Coast.

And how did the love for nature begin?
My dad, brother and I planted hundreds of trees. Our springtime tree planting ritual turned into my passion and my first foray into the world of science.

I went on to do my PhD in eco-stress Snow Gum physiology at The University of Melbourne, Forestry School in Creswick.

Why did you go to Melbourne University?
In order to become the best in the world, I studied with eminent Aussie scientists, lead by Professor Roger Sand and Dr David H Ashton at Melbourne Uni. I earned my "ticket to ride" under their supervision.

Dr. Reese halter on Mount Stirling, Victoria.
You returned to North America then?
I chose not to undertake a tenure position at university because nature needed a spokesperson and so I devoted all my time to writing and speaking on her behalf.

In 2008/2009, after a two-year successful nature television show called Dr Reese's Planet on PBS and Time Warner, I realised that soft selling nature wasn't working so I ramped up my message embarking upon activism. It was time to let people know just how bad Mother Earth was getting beaten up.

From 1998 to 2008, I wrote hundreds of articles that were published in just about every newspaper around the globe. Sadly since 2008, newspapers have lost vast audiences. So I continue to regularly blog for a few publications but now the emphasis is podcasting and two-minute YouTube enviro videos  YouTube.com/NaturesBluePrint

I also broadcast with MSNBC television out of New York as an environmental expert and with ABC Radio 774 Melbourne on their Overnights program.

What were the subjects of these articles?
I blog and broadcast on the war against nature and fossil fuel pollution.
Fossil fuel subsidies of $5.6 trillion annually, green energies and anything to do with nature especially fresh water, bees, food, trees and animals.

Where did it all begin though, what's the spark – you used to go planting trees with your dad and brother, there must be one moment where you knew ‘this is for me’? 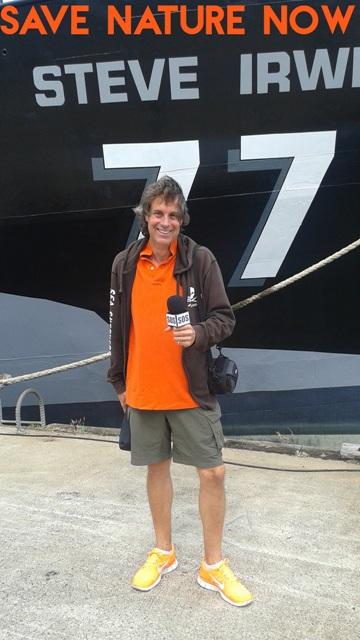 My dad loved trees and advised me to follow my passion,  study life on land and under the sea by immersing myself in it.

What do you think about this latest oil spill along the coast of Santa Barbara, California?
It’s tragic. What we do the ocean we do to ourselves. Now tar balls are coming up on our beaches in Los Angeles 110 miles south of the disaster.

You have begun a video-series online as well?
Yes, ‘Earth Calling SOS’ are two-minute YouTube enviro hits explaining what's going on in our natural world. There is a race afoot to capture the 20 something year olds who are disgusted with how adults have destroyed the Earth and have switched off television - and I intend to feed them the truth. I also do a daily podcast called ‘Earthcast SOS’. I'm pumping the information out there and loving every second of it.

Why these titles?
The oceans, forests and animals are dying quickly -- SOS is an emergency call. Humans are rapaciously driving the Sixth Great Extinction. Organised crime is leading the charges with $400 billion per annum in live and dead animal parts. It's just bloody awful and utterly unacceptable!

You are returning to Australia for the Save Nature Now Tour in July. What will this be about?

I'm visiting Avalon/Pittwater on my Save Nature Now Tour. Seven talks in six cities within a fortnight - coast to coast baby!

Aussies love nature. I'm returning since my 'Shepherding the Sea Tour' in December 2014 was a smash hit. The Save Nature Now Tour kicks-off in Los Angeles, goes Down Under before returning to America for a coast to coast foray. I'll be presenting new material as part of these events.

I released ‘Shepherding the Sea’ in Australia in December 2014. It is my ninth book and doing very well so I'll also be sharing insights into the state of our oceans including healing them.

Could we share an extract of this work so people understand what it addresses?

Chapter 1 -- End of a Bloody Poacher
On the early afternoon of July 15, 1979, a courageous 29-year-old Earth warrior, Paul Watson, on board a former North Sea trawler called the Sea Shepherd, sighted the notorious whale-poaching vessel Sierra, 180 nautical miles from the coast of Portugal. “You murdering bastard,” bellowed the passionate Watson. “You’ve killed your last whale!" The hunter became the hunted. The chase was on... 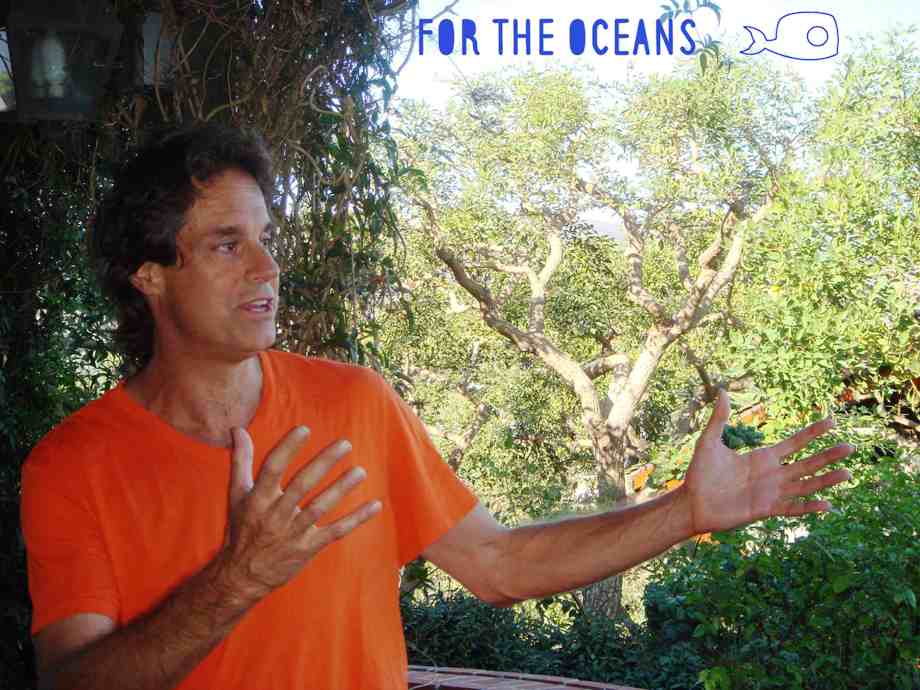 Chapter 3 -- Wonders of the Sea
When was the last time that you stood at the sea’s edge, gazed out upon the aqua marine wavy, windy surface, and inhaled a bite of brine whilst the surf lapped at your feet? Ever wondered how the Gray whale, the longest migratory marine mammal, navigates without a map? Or that 39-tonne (43-ton) Humpback whales sing, not just to attract mates, but also for their supper or, at least, while they hunt for it. Or, that when a fish is hooked it feels excruciating pain just like a human?

Chapter 5 -- How Much is too Much?
Once upon a time, the Grand Banks, off the south-eastern Canadian shoreline, were the richest fishing grounds on the globe. In 1497, the explorer, John Cabot, arrived along the Grand Banks and wrote that Cod was, “swarming and so plentiful that they could be scooped into baskets let down (and weighed) with a stone.” In 1774, within a couple months, 564 French fishing vessels with 27,500 fisherman took a mother-load valued at $5.5 billion (present US value) of Cod from the Grand Banks. It should, therefore, come as no surprise that by 1992 Cod had vanished from one of the most fecund fisheries ever. Was the Atlantic Cod's crash an indicator of the oceans’ health, globally? Technology, human population pressures, greed, duplicity and subsidies have all collided. In this case, the “Perfect Storm” has unimaginable consequences for all life, both marine and terrestrial.

Will you have any time off while you are here?
I'll be having a Captain Cook (look) at migrating whales and shooting SOS videos on Avalon Beach. I love watching sunrises and sunsets -- I'll be on the beach savouring them!.

What are your three favourite places in the world and why?
Mount Stirling in the Victorian Alps and the Snow Gums are close to my heart.
That's where I cut my teeth studying eco-stress physiology - life at the top of the mountains. The Woolybutts or Alpine Ash just beneath the Snow Gums on the mountain smell like scrumptious candy canes and the trees are huge compared to the Snow Gums.
I love Los Angeles. It’s a very special city with a healing energy force that super-charges me like no other city in the world.
Thirdly, I cherish whale watching anywhere – I love them, they’re extraordinary "Doctors of the Sea".

Do you think if you weren’t a human being you’d choose to be a whale?
Yah Baby - a majestic Blue whale!

What is your ‘motto for life’ or a favourite phrase you try to live by?
Protect our planet. 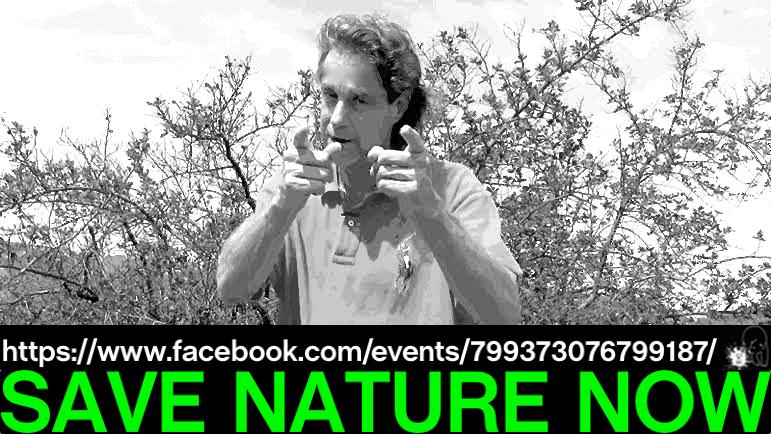 Welcome to this extraordinary event!! Thank you for your support!! You are here because you care about our planet. You care about the future.

Dr. Reese Halter shares your concerns and passions. His knowledge is vast and deep. From Bees to Trees to Seas he seeks to expose truths and proffer solutions. We are all connected.

You have the opportunity to experience Dr. Halter live. Please join him at any of the many presentations below. Please share and invite. If you are actually attending please fill in the pinned survey. 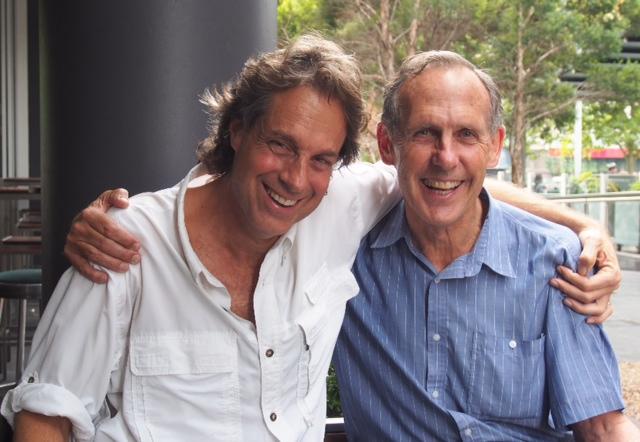 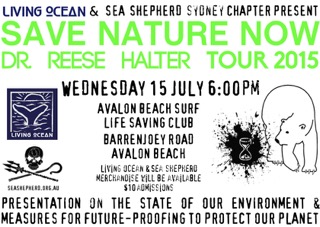 ABOUT EARTH DR. REESE HALTER:
Dr. Reese Halter is an extraordinary voice for nature. He works ceaselessly to protect our planet by presenting truths and solutions. Dr. Halter does this through a variety of venues. In person, Dr. Halter will get you excited and proactively informed in his crusade to Save Nature Now.

The Oceans are dying. Poachers are plundering sealife at an extraordinary rate. It is time to end this deranged ecocide because if the oceans die, we die. ‘Shepherding the Sea: The Race to Save our Oceans’ by Dr. Halter is a shocking expose on the dire state of the seas. Shepherding the Sea draws upon a quarter century of studies and observations by Dr. Halter, and lengthy interviews with legendary ocean conservationist Captain Paul Watson, founder of Sea Shepherd Conservation Society.

Dr. Reese Halter's passion for the environment is lifelong. He is a powerful voice for bees, trees, and seas and saving nature now. Dr. Halter is a distinguished biologist, broadcaster and writer. Shepherding the Seas: The Race to Save our Oceans is his ninth newly released book.

Dr. Halter has the unique talent of making current complex environmental issues accessible and compelling to any audience. He believes that human beings are exquisite problem solvers, and that for every problem there are at least 3 solutions. His passion to protect our planet is contagious.

Dr. Halter has studied nature for 4 decades. He holds a Ph.D. in eco-stress subalpine eucalypt physiology from The University of Melbourne. He lives in LA and is active in the community with children and schools. He enjoys quiet walks on the beach with his beloved Chessie.

Find out more and stay up to date on Facebook page