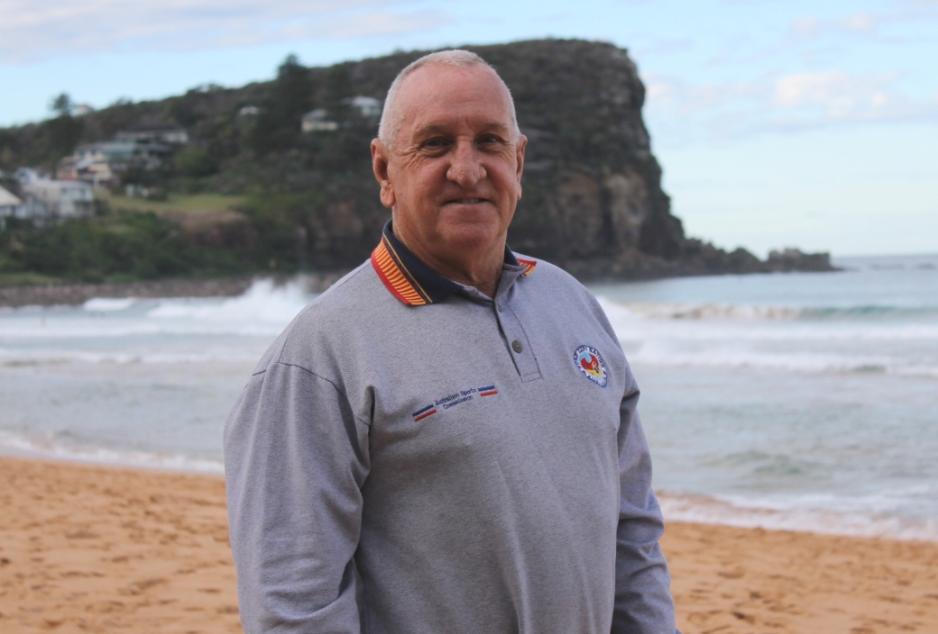 Monday June 9th the announcement’s included Dr. Stephen Nolan - OAM for ‘For service to international humanitarian and health care organisations, and to medicine’, Past Mayor of Pittwater David James ‘For service to conservation and the environment, and to local government’ and Life Member of Avalon Beach SLSC, Warren Young ‘For service to surf lifesaving’.

Warren has had an association with Avalon Beach since 1979 when he was an assistant age manager for the under 4s. Three years later, he obtained his Bronze Medallion and that was the start of his active career in lifesaving and he is still doing his patrols.
Throughout the years, Warren has been a Patrol Captain, Treasurer, Surf Swim Race Director, Junior Club President and was at the helm of the club as President for 11 years from 1990-2001, Vice-President twice from 1988-1990 and 2001-2009, Life Member since 1999 and served as President and Vice-President of the Junior Club.
Mr Young was also Vice-President of the Sydney Northern Beaches Branch from 1995-1999 and a Life Member from 2007. He was a Co-Founder of the Ocean and Open Water Swimming Association and founding Member of the Avalon Beach Ocean Swim.
He was awarded the Distinguished Service Award from the Sydney Northern Beaches Branch in 2003.
"I feel very humbled about this but it's also very nice to be honoured. I am also lucky to be involved in such a great club,'' he said yesterday when we spoke to him.
Current Avalon Beach President Christine Hopton says Warren has been part of the backbone of the club since he first obtained his Bronze Medallion.
"His involvement has seen him organise events outside the traditional surf lifesaving events, such as surf life savers attending Olympic celebrations,'' Christine said. "He has been Director of the annual Avalon Beach Surf Swim, which is a major fundraiser for our club, for the past 20 years and is also involved in the Avalon Historical Society and a committee member of the Australia Day Ambassador's Program for 15 years. He does so much for the community and surf lifesaving.''
Picture (Right): some of the Avalon Beach SLSC members held an impromptu dinner for 'Wazza' on Saturday night and presented him with a 'medal' someone got from the Red Cross shop! Pictures Courtesy of Roger Sayers.
When we spoke to Warren on Saturday afternoon he was still a little overwhelmed by the honour.
We asked him what surf life saving meant to him, he replied “It’s a way of life. A big family.”, adding “I’ve been involved with surf life saving such a long time now, all my kids have been through the club (Avalon).  My son Mark was NSW Professional Lifesaver of the Year and Australian Professional Lifesaver of the Year (2008). Simon is is Team Manager for Volcom in Europe, he organizes all the Surfing Comps. For Volcom and has lived in Frace for 10 years, and son Ben works at Insight Surfboards at Mona Vale and is their National Sales Manager.”
“I lost my lovely wife Barbara 15 years ago. She was very involved in community activities, trained people at Hertfort’s, was a member of Avalon Quilters. The people at Avalon Beach SLSC have been a family to me and my boys since. They’re a lovely bunch of people and I feel honoured to be among them.”
MEDAL (OAM) OF THE ORDER OF AUSTRALIA IN THE GENERAL DIVISION - Mr Warren Keith YOUNG
For service to surf lifesaving.

We also spoke to former Mayor of Pittwater David James this week to congratulate him as well:

Thank you for your congratulations. It is an honour I proudly accept on behalf of all the good people who worked so well together to secure the many great outcomes for our local environment which have occurred in the years from 1977 until the recent past.

Just two slight inaccuracies in the list of my endeavours. I was a founding member and on the executive as Chair of the Lagoon Committee from 1977 until elected to Warringah Council in 1980 but due to a quirk in the constitution (inserted on the advice of a sitting Warringah Councillor at the time of its formulation) to the effect that no sitting Councillor should be a member of exec and so I had to resign and carry on alone.

The second correction is that I was Chair of the Local Government Advisory Group to the Hawkesbury Nepean Catchment Management Authority but not of the Authority itself covering 23 Councils stretching from Picton in the south to Lithgow in the west and Pittwater in the North).

The formation of Garigal story is correct in that preservation of all the remaining natural bushland in the lagoon catchment was the major goal of the Narrabeen Lagoon Committee from its inception and in the years until its demise. Thereafter the fight was taken up and/or supported by others including President Julie Sutton of Warringah who was instrumental in taking up the offer from Dainford to trade off, free of charge of 875 hectares of invaluable bushland that founded Garigal,  in exchange for development approval for Dainford over their land on the western side of Forest Way.

A previously unrecognised driving force that led to Garigal was Madge Cockburn, Chair of Progress and Properties group of companies, that included Dainford at the time of the exchange. It was Auntie Madge and Hopewood Youth Welfare who fostered and ultimately gave away my wife at our marriage and with whom there were several, well-timed seminal discussions on the high, high conservation value of the catchment land in question.

As the old saying goes "Success has many fathers etc".

Notable others were the late, great Jim Somerville-environmental defender extraordinaire and mentor to me and also the late Jim Revitt. They were great men full of public spirit. I must also remind others of  Tom Webster and people like Angus Gordon, Maurie Gunter, Mark Edwards David Palmer, Phil Walker and many more such enlightened thinkers and doers, I know them and salute them all.


Medal (OAM) of the Order of Australia in the General Division - Mr David Lyndon JAMES
For service to conservation and the environment, and to local government.

Fomer Pittwater Mayor David James Honoured - 10 Jun 2014, from Pittwater Council
Former Pittwater Mayor David James has been honoured at this year’s Queens Birthday Awards with a medal of the Order of Australia (OAM).
The North Narrabeen resident has been honoured for his service to conservation and the environment.
David James worked for over 20 years in local government and was elected to Pittwater Council in 2004, becoming Mayor in 2007. He also served on Warringah Council between 1980 and 1983.
David James is a marine engineer by profession and worked on Sydney’s harbour. He has lived on the northern beaches all his life and was a former member of the Residents Association of Pittwater and the Narrabeen Lagoon Committee before his election to the Council.
Mayor Jacqui Townsend said David has always demonstrated a passion about preserving the beauty of the Pittwater environment and seeing action taken at a local level on climate change.
“David served Pittwater Council with passion and empathy for our precious natural environment. This passion was at the forefront of any decision he made and David went beyond his role as community advocate and exceeded all expectations as a councillor. He was also a stronghold in keeping our Council's financial structure strong,” said Mayor Townsend.
“David was instrumental in the Council achieving a lot in its short history, including saving Currawong, the Warriewood wetlands, the Warriewood escarpment and Winnererremy Bay along with improvements to the business centres at Avalon, Mona Vale and Newport.
“It is pleasing that David has been recognised in this way for his service to conservation and the Pittwater environment,” added Mayor Townsend.

Last but certainly never least is a gentleman whose tireless efforts to raise the standard and availability of health to our community and communities overseas is becoming more well known, Dr Stephen Nolan, who is also a Palm Beach SLSC member.
“He’s a good bloke to have in your corner when there are emergencies on the beach,’’ Palm Beach Surf Life Saving Club captain Tom Rees said during the week.
‘Doc’ Nolan has been a member of the Palm Beach Surf Club for 15 years and was awarded the Order of Australia Medal for his service to international humanitarian and health care organisations, and to medicine.Apart from his Director of Intensive Care roles at Hornsby Ku-ring-gai and Mater Hospitals, he is Chief Executive Officer, Sumba Foundation, Australia since 2008, contributing medical expertise during visits there, and is Community member of the Advisory Board, CanHelp, Nepal since 2008; sponsored the Education of five Nepalese children; provides advice to the Indigenous management and staff of CanHelp Nepal.


Medal (OAM) of the Order of Australia in the General Division - Dr Stephen Robert NOLAN
For service to international humanitarian and health care organisations, and to medicine.

Community Member of the Advisory Board, CanHelp, Nepal, since 2008; sponsored the education of 5 Nepalese children; provides advice to the Indigenous management and staff of Can Help Nepal.
Chief Executive Officer, Sumba Foundation Australia, since 2008; contributing medical expertise during visits in each year between 2008 and 2012.