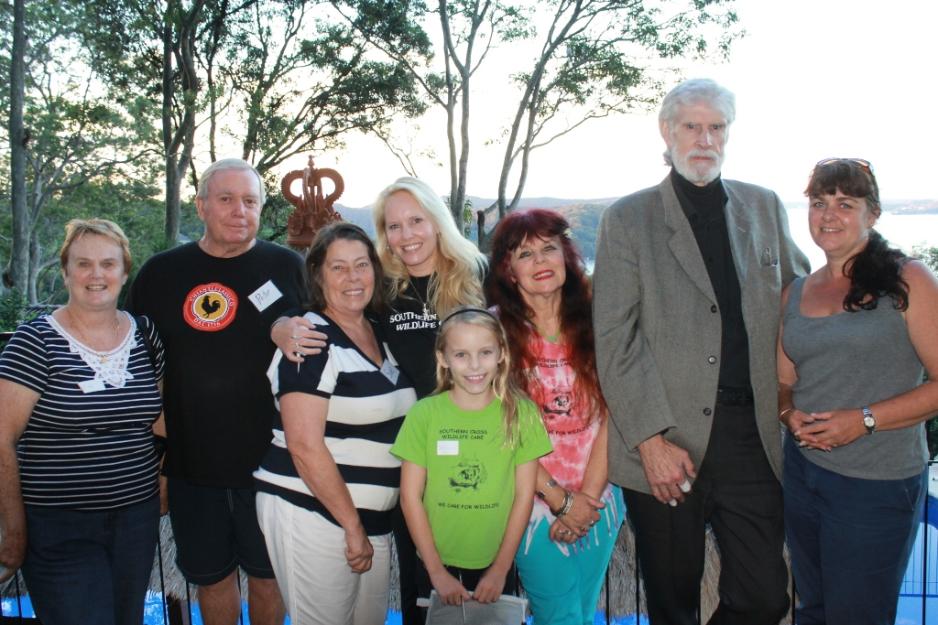 The Possum High Tea held at the aptly named 'Coomalong' (meaning 'possum meeting place') the lovely home of Peter and Sue Glasson attracted 100 visitors last Sunday. Scrumptious cakes, teas and even a glass of wine could be sipped while listening to stories from the Southern Cross Wildlife Care volunteers about the delightful and challenging aspects of doing their utmost to save thousands of creatures each year.

Founder of this vital non-profit organisation, Dr Howard Ralph, was a revelation, an obviously dedicated and very kind man who spends seven days a week  and sometimes 24 hours of those days performing vital surgery to save all the wide range of Australian animals people bring to him. The highlight of the afternoon was a presentation by Dr Ralph of some of the case histories of every feathered, furred, finned, scaled and 'other' creature operated on and saved.

Dr Howard Ralph has operated at a clinic at Mona Vale for decades. He has also built a surgery at Braidwood on the Southern Tablelands and spends time each week operating on animals brought into that clinic. Sonja Elwood, who began the Sydney Wildlife organisation, a group dedicated to the second phase of saving animals; caring for them after their operation or if they have been orphaned, feeding them, sometimes several times a day, changing dressings, provided a few insights. Dr Ralph has had to build the attachments for anaesthetics himself as there are none on the market to suit the wide range of animals needing ops – from 20 gram lizards up to 80 kg kangaroos. He has also had to develop the technology required and the chemistry of the drugs used – once again a 20 gram lizard is not going to need the same does as a 80 kg kangaroo. Another indication of the passion here are Dr Ralph’s fingers which are always taped from bites due to tending to these creatures. In the hundred or so photographs we saw of patients on Sunday each and everyone showed one finger or another and sometimes three on each hand taped.

The slides we saw were not as horrific as the carnage on our animals seen by this team. The incidents of cruelty, of animals shot by air rifles or scatter guns, or patients that are victims of our roads and their pathways through former green spaces at speeds 70 to 110 kilometres an hour have made some ‘unable to sleep at night’. Strange as it seems, there are human animals here who see a brilliant bird and want to shoot it, who see a doe eyed furry kangaroo or wallaby and run it over with their vehicle, then leave it agony. Although this would obviously point to symptoms of a sickness in these perpetrators it is unfortunately the doe-eyed and brilliantly coloured who bleed instead.

In 2010 the most widely publicised figure of roadkill within NSW was that produced by NSW WIRES in conjunction with Macquarie University. Their figure of 7,000 animals per day in NSW (or 2.55 million animals per year) was derived from six weeks of data collection over 199 km of road (1). Anyone who has driven up Mona Vale road will have seen our swamp wallabies as victims of the speeds some people go to in known crossing areas. NB Roadkill estimates we have only 400 in this colony left and we are losing an average of 10 of these a week – you don’t have to think too hard to realise we may lose all our swamp wallabies if we don’t begin to act. The stretch of road that runs down from the Bahai temple and up to Kimbriki tip is where we have seen these fatalities most often.

The other aspect of losing our native creatures is habitat reduction. Most people in Pittwater are aware that we have nowhere near the amount of wildlife we had a few short decades ago. We are aware that the koala has gone from Pittwater when generations heard their voices in trees from Bayview to Palm Beach. The reduction of their habitat, of their food trees which were one kind of euclaypt in one season and the need to move to another in due season, and no means to get there anymore due to masses of building in between and no planning for green corridors, as much as careless or thoughtless owners of dogs and cats, has deprived our children of seeing and hearing what we saw and heard other then when visiting a zoo.

We provide a few extracts from Dr. Ralph’s presentation and a small list of some of the case histories presented on Sunday to give you all an insight into the range of injuries and the brilliant skills applied to restore them to the world they belong to – our bush, trees and waterways.

The charity is called Southern Cross Wildlife Care. We started that some years ago with the object of trying to formalise the work that I was doing in the practice. Now because there was very little attention paid to the work we were doing in the practice we realised we needed to formalise that and make it a definite ongoing process so that when I fall off my perch, for example, then the process will keep going. That’s hopefully what will happen. So to do that we’ve done a number of definite things.

We established a care centre down south which was a lot of work and headache but it’s a fantastic place and I think it’s a centre of excellence and we all try very hard to keep it running at a top level, not only of capacity but a level of treatment that people come from near and far to find.

The critters that we look after include the following;
Mammals
Birds
Reptiles
Fish

There are lots of orphans, whether they be kangaroos or birds or others that don’t come to us because our main charter is to look after the medical or veterinarian, surgical and anaesthetic needs of all these animals. We do get plenty but there are others out there that are orphaned when mum was killed and they go to carers, including the ones in the local area and also some who are on the South Coast. These people look after the general succour of these animals; they all need extra special dedicated care.

One thing I’ll emphasise as we go through these images is that there is a misconception that wildlife cam be treated any old how. That’s not true – they need proper care; they need good anaesthetic and good medical treatment, they need proper surgical attention to detail, to be operated on in a sterile environment and proper care afterwards; they need all of those things.

A few examples of the sort of creatures that they do see – A juvenile wombat that has been orphaned by a mother being hit by a car and killed on the road. The photo showed this little fellow he was only partly furred, and still a baby, he had some serious injuries from a fox. His mother was killed and while he was in the pouch a fox came along and chewed off half his foot which left him with this terrible trauma.

Dr Ralph: We treated him for this – it took him a month or so to get over the initial infection but it left him with a non-functional foot – if you’re a wombat you need feet to dig a hole for your burrow. We went ahead and tried to repair this – under general anaesthetic we were lengthening tendons and shortening others and trying to end up with a functional foot which we did.  I saw this wombat last weekend and he’s now walking normally on that foot; he’s fine.

A swan came from Centennial Park with a belly full of fishing tackle. The swan had an operation to remove it all and is doing fine now.
A koala recovering from the bushfires –
Dr. Ralph: we do extend ourselves to go into the bushfires in Victoria and the bushfires in Coonabarabran, the floods and the cyclones in Queensland recently- We do extend beyond New South Wales when we’re asked to do so.

A baby glider that was tossed out of a tree, landed on the road, suffered some trauma, tore a membrane and had it repaired.  Fruit bats have recently needed to be treated for dehydration and heat stress. They also get injured when they fly into various obstructions like wire fences for example. Barbed wire fences have a terrible impact on Australian wildlife. Luckily the fruit bat pictured came under Dr. Ralph’s care and now he’s doing quite well.

An Echidna that couldn’t breathe properly – had an obstruction in the airway, a swelling in the larynx and needed an urgent tracheostomy which is to open the airway and provide a tube into the air way, without this procedure he would have suffocated. The echidna pictured is under anaesthetic ––has an airway inserted and the idea was to make this a permanent opening that will last a month or so until the problem has settled and then Dr Ralph can close it up.

This is just a miniscule example of the work undertaken. We asked how many wildlife animals he estimates he has treated and the figures are around 2-3 thousand creatures a year for twenty years, which is at least fifty thousand creatures. Lindy Stacker (Howard’s right-hand lady) has kept a count of all those treated in 2012 and it is over three thousand up until October, 2012. The statistics for up until April 2013 have not been compiled yet. All of these operations are performed without any charge – there is no one to charge in any case, there is no subsidy from any government at state or federal level for the vets who do attempt to save the wildlife brought to them – there never has been.

A gentleman audience member, Ross, a friend of Dr. Ralph’s for over thirty years shared a story of how he was quoted $650.00, this back in 1980’s to fix a problem his beloved dog ‘Goldie’ was having. A fair amount even now. Luckily he met Howard who charged a whole $35.00 to fix Goldie. As Ross said – “Howard will never make a lot of money but he will have a lot of friends.”

Anyone with a pet who has been hit by a car or become ill is well aware of the high cost of all the anaesthetics, antibiotics and equipment required to successfully save their furry family member. Imagine this times three thousand and you get an insight into why it is vital that we all support the work of these generous people by any means possible. Money may have made a mess of this place but it can also be used to shift in the opposite direction to clean our act up and look after all the wildlife under our care.

On Sunday a few minutes with Dr. Ralph when he picked up ringtail possum from a carer to examine this gorgeous baby, and find it had something wrong with a vertebrate almost immediately, also brought a very strong, very strong palpable sense of his instant connection with this creature. This man was made for this work and has become more so through decades of dedication. We need people with this level of intelligence, dedication and affinity with our wildlife to be supported so they can get on with what they do.

Please visit the kinks below for Southern Cross Wildlife Care and Sydney Wildlife and give whatever you can or volunteer to help out.

“The greatness of a nation and its moral progress can be judged by the way its animals are treated” – Mohandas Gandhi. 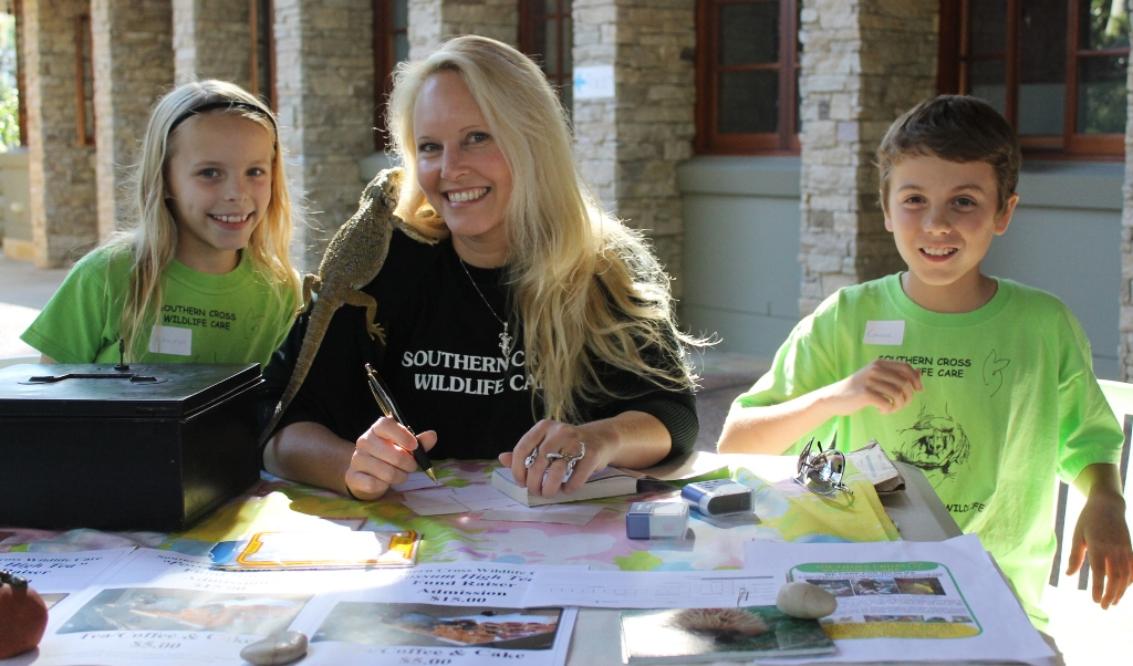 Kayleigh, Lynleigh and Connor Grieg with Veritas a bearded dragon currently in their care.  "Veritas means 'turth'. " Kayleigh taught us. 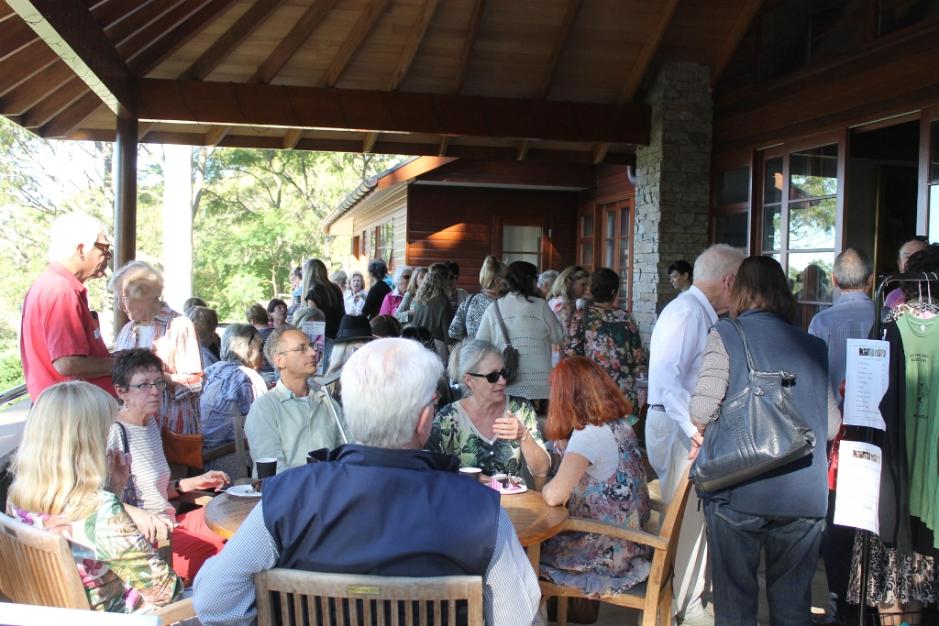 Guests at the Possum High Tea enjoyed beautiful food and the lovely gardens of Coomalong.