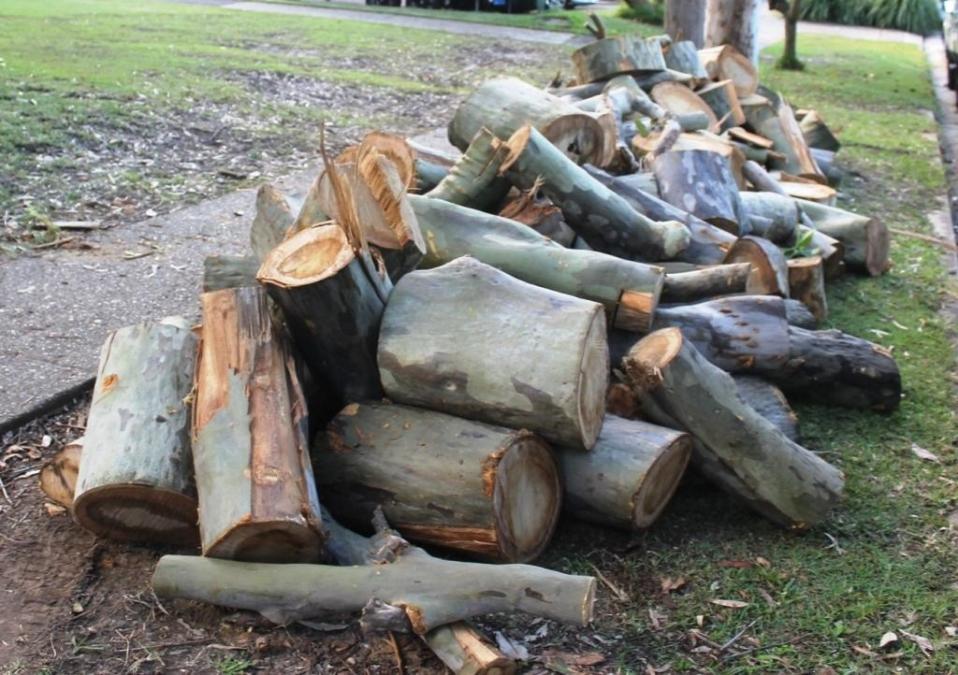 The 10/50 Code combined with the recent Sydney Storms has vastly changed the beautiful green look of Pittwater. During the week yet another beautiful Spotted Gum was found cut to pieces on the side of the road in Avalon. Is it a victim still left waiting collection from the storms, or a good time to sidle a beauteous giant out for collection?

God and those who did the deed know which it really is.

This gum is certainly not as dried out as the sole large Spotted Gum branch we lost from our stand of 20+ such beauties during the April 2015 storms - it was clearly alive before being felled.

Spotted Gums are a protected species in Pittwater -

The Scientific Committee, established by the Threatened Species Conservation Act, has made a Final Determination to list the Pittwater Spotted Gum Forest in the Sydney Basin Bioregion as an ENDANGERED ECOLOGICAL COMMUNITY on Part 3 of Schedule 1 of the Act. Listing of Endangered Ecological Communities is provided for by Part 2 of the Act.

Item 11. In view of the small size of existing remnants, the threat of further clearing and other known threats (listed in 9), the Scientific Committee is of the opinion that the Pittwater Spotted Gum Forest in the Sydney Basin Bioregion is likely to become extinct in nature in New South Wales unless the circumstances and factors threatening its survival or evolutionary development cease to operate and that the community is eligible for listing as an endangered ecological community.

It is clear we live in an environment that will regularly clean itself out of deadwood, and that if it doesn’t, we have the acumen, training and resources to keep our bushland surrounds as well as protect life and property. To pretend otherwise is false.

In a week filled with many reports of distressing Environmental Desecration, to see this once beautiful eucalypt cut to pieces reminds us that the 10/50 code is falling far short of its stated intent and some species should never have been removed from any protections – many of which took decades to establish.

A report this week from an eye witness in the Blue Mountains, where devastating bushfires in 2014 were the impetus for so much destruction, and used so wrongly by those seeking to push through developments that had been refused, or any of many other inexcusable ‘reasons’, shows the 10/50 Code has led to the illegal dumping of woodchipped trees which will themselves become firehazards when heating up while breaking down.

Eli Bendall states: “The dumping of woodchips in public places near fire-prone bushland in the Blue Mountains is out of control and escalating. This poses a serious danger to the community as it is creating a very large, community wide fire-hazard that puts us all at risk.”

Although some modifications were made to the 10/50 Code to try and stop those using this carte blanche approach to further personal dodginess, their reasons for doing so now, on or near deeply sodden grounds, makes a mockery of the original premise and clearly illustrates the 10/50 Code needs either a complete overhaul or a complete repeal.

Above: In Pittwater This week

In Text: In the Blue Mountains on Friday – picture courtesy Eli Ryan Bendall