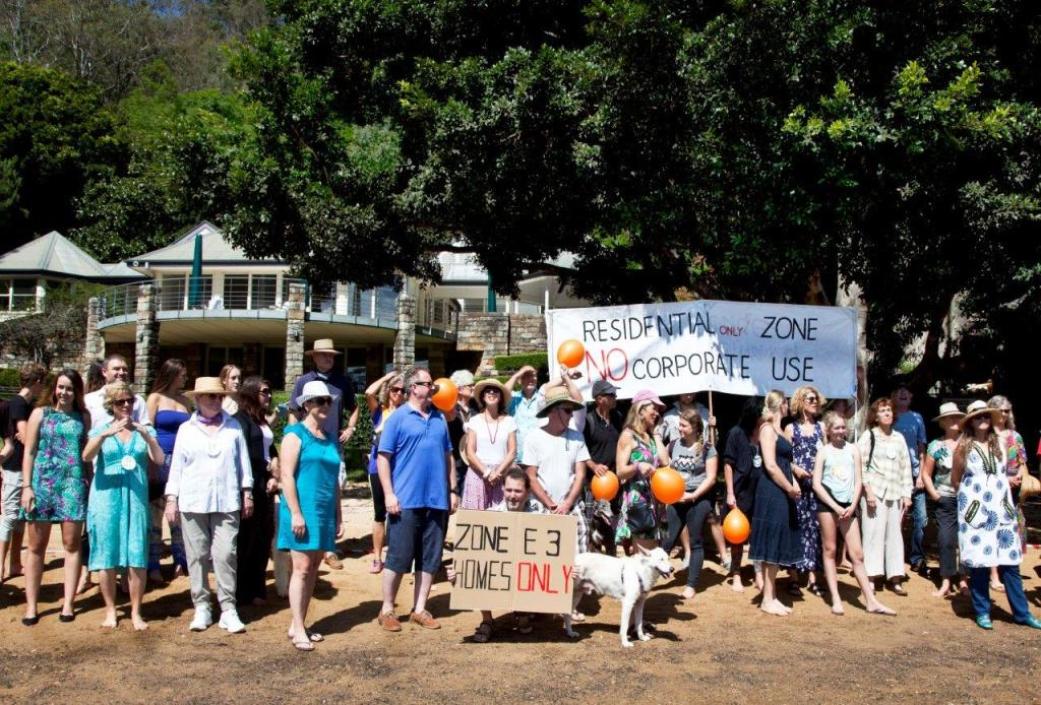 More than 70 Scotland Island residents gathered on the beach on the weekend at the iconic Yamba Estate to protest against a highly controversial commercial development on Scotland Island.

The proposal claims to be a new dwelling but closer inspection clearly demonstrates its integration with the existing property at Yamba. The resulting 14 bedroom resort, corporate retreat or training facility, as it has been variously described, is to be used for short-term stays by business executives.

“This is not a family home, this is not residential. It is a commercial development and clearly does not meet Council’s E3 zoning guidelines,’ said Scotland Island resident and Yamba neighbour Chris Goold. “These guidelines include a requirement to provide for low density, residential development in keeping with the land form and not visually prominent. It does none of these.”

With more than 15 formal letters of objection already lodged with the Pittwater Council, and another 35 to be delivered, yesterday’s protest of leading community members sends a clear message to Council members that this development application is completely unacceptable and should not be allowed to proceed.

“Scotland Island is an Environmental Management Zone with only residential accommodation allowed. This building is termed variously as a resort, corporate retreat and training facility and will be occupied by different people all the time that will come for short stays and go. They will  not care about or be a part of the community, ” said Western foreshore resident, Jennifer Knox who addressed the group.

“Apart from residential status, local residents are particularly concerned about the size, bulk, scale and design. The towering three-storey frontage, dwarfs the turn of the century Yamba homestead. The new building will have floor space more than 750 square metres, is not sympathetic to the landform, not low density and definitely would be visually prominent across Pittwater. The building is too large for the site but they are asking for exemption based on architectural merits.”

“How will this site possibly deal with the waste water of so many visitors?”  Not only is the Wastewater management Report based on a variety of optimistic assumptions, its main dispersal site is a 25 metre long trench that approaches within 10 metres of the foreshore.  Foreshore soils are not suitable for absorption and leakage of effluent into Pittwater is highly likely.

“The residence is subject to a development application that is being processed by Council under delegated authority. It is a clever application that is set up in the guise of a single dwelling however very clearly is a commercial development. The residents are urging council to not just assess the DA in terms of point by point compliance and variation, but to look at the big picture here. It has the potential of another Currawong-like reaction and, if approved, it sets a very disturbing precedence for all of Pittwater,” Ms Knox said.

Details of the application can be found here:

The proposed building would stand just to the north east of the existing main house on Yamba and would contain six bedrooms, seven bathrooms and two dining areas.

The main channel for communicating your views is via the Council website following the link above.

Scotland Island Residents Association (SIRA) invites comments in relation to the proposed development. Members are welcome to email us at secretary@sira.org.au or post here. 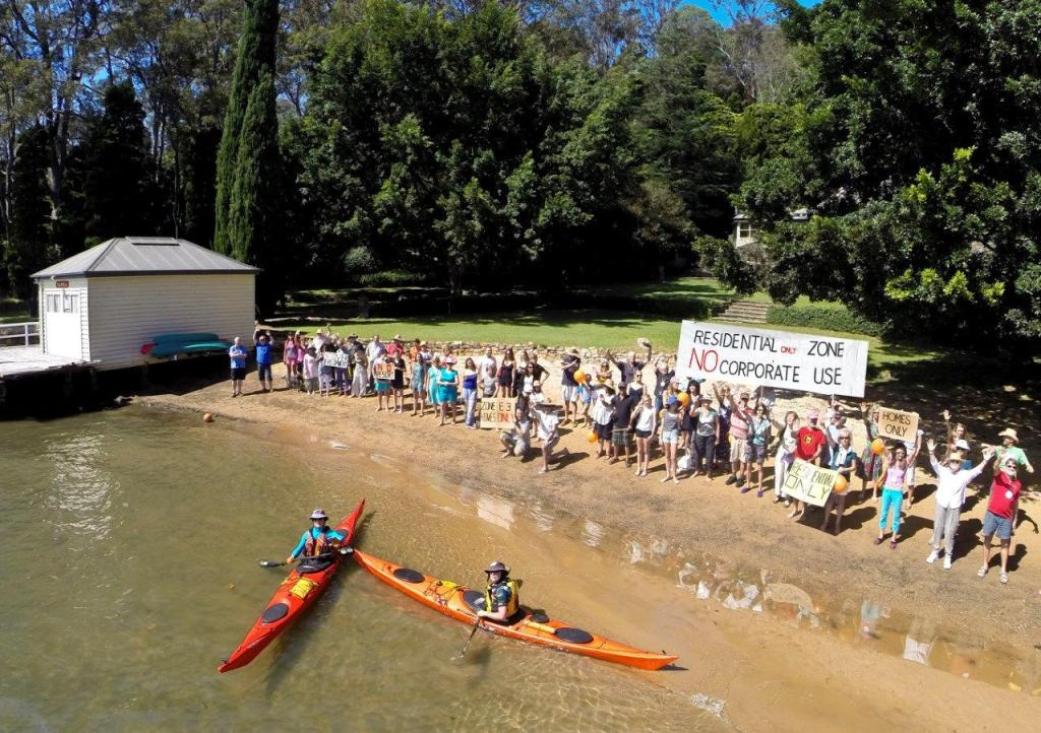 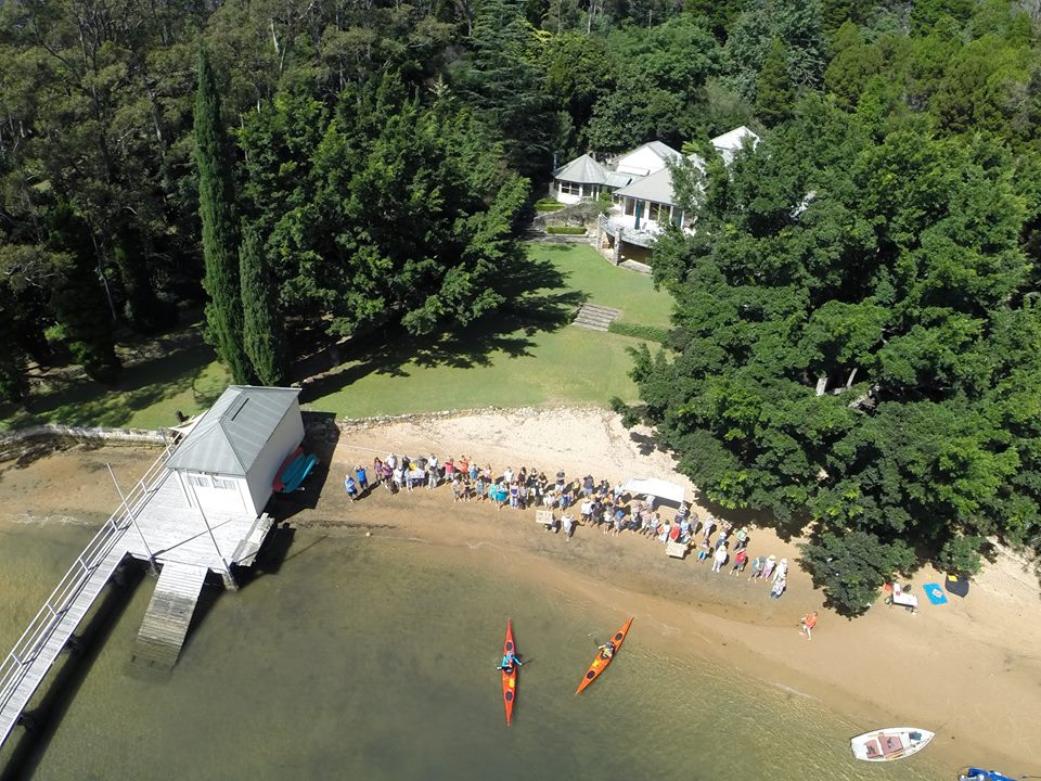