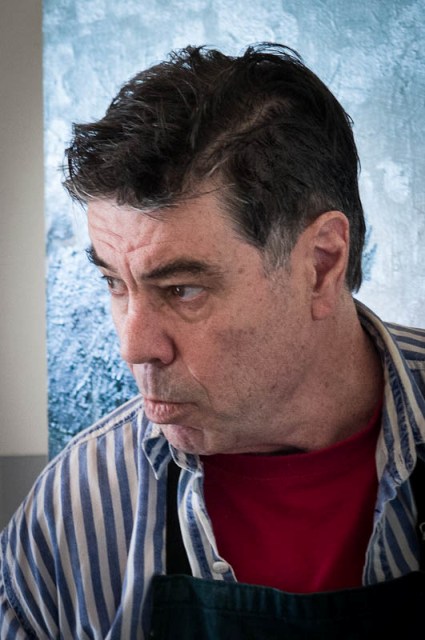 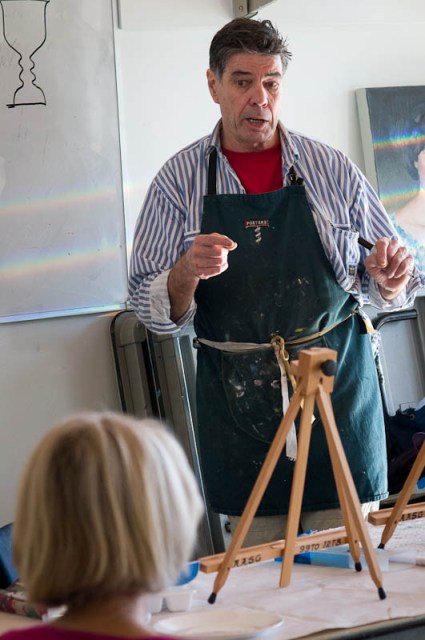 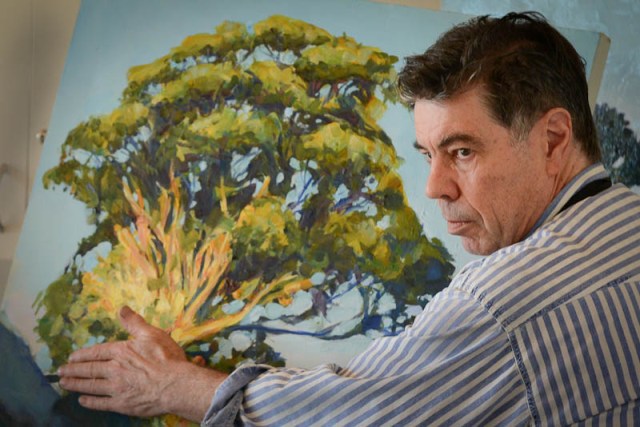 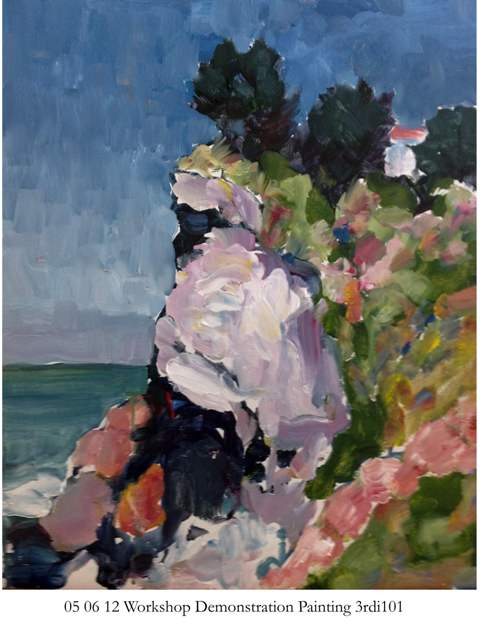 Employing the ‘third eye’ may seem a required exercise for anyone who wishes to create, but how often do any of us do this; let alone acknowledge such a facility and its capacity can thrive in us. Recently we attended a class given by guest tutor and Newport  artist Ted Blackall to the Art Group of Avalon Active Seniors in which he explained and demonstrated this method. The class was a revelation and Mr Blackall’s explaining that anyone can create, and create well, more then just encouraging for any would-be creative type in any medium. A lot of this has to do with suspending your doubts in yourself and allowing your emotional-intuitive female principle (right-brain.) to surface so you may begin ‘painting in the 3rdi’.

To understand the concept behind this theory and practice we need to explain a few fundamentals. Given that anyone and everyone can brush paint on to a wall, a window sill or a letter box, painting a work of art artistically is not just and more than just a physical act of craft. So for one to Paint art well it becomes necessary to isolate and identify the culprit that prevents or obstructs one from Painting 'well'.  The study of what Ted Blackall is calling 'Painting In The Third Eye' is based on an examination and appreciation of the contemporary scientific identification of the Quantum Field. Quantum physicists report that however deep or close molecular structure is explored there appears to be no matter and that all we can know of our reality is yet just a thought or a dream.

When applying this to the self: There [here] is but One [Mind] and Oneself  is not just a part of the one mind but the One Mind or unified Field in it's entirety- or all of creation itself. Taken further there is naught outside the Oneself, with the apparent exception for what appears to occur in this worldly life as a split off  illusion/dream of an individual BODY [me] in dynamic competition and relationship relationship with individual identities [them] 'outside' Oneself. Apparent other Sigmund Freud named this the "Ego".

Given the body is host to My Ego [me] the body's eyes act as its visual informant. It is this ego [self] informed by the  body's eye's sight, that judges, attacks, criticises, inhibits, separates and negates the limitless, encompassing, at once "vision" inherent in the in the One unified mind. It's perhaps why I and eye make the same sound-in the English language at least... in the One Unified Mind. Painting in the third Eye as a teaching seeks to isolate, observe, bypass and or circumvent the Ego's eye's in the act of creating art. The particular is obscured as the whole is apprehended.

In bio scientific terms writers and researchers have suggested that the third eye is in fact the partially dormant pineal gland, pituitary gland, thalamus gland (at center of brain) or all three in synchronisation with each other. Either way it resides between the two hemispheres of the brain. According to the teaching of Fr. Richard Rohr the concept of the 'third eye' is a metaphor for non-dualistic thinking, the way the mystics see. In Rhohr's concept, mystics employ the 'first eye' (sensory input such as sight) and the second eye (the eye of reason, meditation, and reflection), "but they know not to confuse knowledge with depth, or mere correct information with the transformation of consciousness itself. The mystical gaze builds upon the first two eyes—and yet goes further."

"It happens whenever, by some wondrous “coincidence,” our heart space, our mind space, and our body awareness are all simultaneously open and non-resistant. I like to call it presence. It is experienced as a moment of deep inner connection, and it always pulls you, intensely satisfied, into the naked and undefended now, which can involve both profound joy and profound sadness at the very same time."

How does all this help you paint better though? As Ted Blackall explained it, using the instance of Im Dong-Hyun Olympic Korean world archery Champion record holder who has 10% vision in one eye and 20% in the other, or the ‘Zen Archer’ as he refers to this champion. He 'feels' which way to aim his bow at the centre of a blur and allows his true aim to be and do just that; aim truly. Ted also points to the way we look at ourselves in a mirror before going out, tilting our heads to one side then the other to see the ‘whole’ picture and how that comes together rather then just focusing in on one small piece. For example; rather than seeing the brooch and shoes separately one sees how the brooch and the shoes go together at once.

An  introductory exercise in 3rdi painting is the standard medical eye test of holding the waggling thumbs shoulder high, just outside the field of sight, whilst 'looking' directly into the doctor's face, then slowly bringing them, waggling into the range of  eyesight at either side. The direct eye view of the doctor's face dissolves in a nameless [blur] as the "Third Eye" [peripheral vision] appreciates the waggling thumbs and all the elements within the entire field of vision at once.

Following a brief round of further drawing and optical exercises the initiate students sets up the easel with canvas, paint on palette and photographic reference of the subject i.e. a painting of 'Avalon Head'.

PAINTING IN THE THIRD EYE.

Under the verbal guidance of the teacher [plus an adjacent separate step by step demonstration], the student proceeds to paint from the subject reference in the 3rdi S M A R T' routine;

SELECT the particular detail of the 'Avalon Head' reference.

MIX on the palette and load the brush with the approximate colour and tone of the selected detail on the reference picture.

AIM with the focal eyesight the loaded brush head at the target area, [suspending the brush just off the canvas surface.]

RELOCATE the focal vision to a point at 10 o’clock away from but near to the target. [Thus distracting the focal eye - keeping the criticising, inhibiting, doubting ego busy elsewhere and otherwise occupied.]

THRUST the loaded brush head at the target area on the canvas, pushing the paint out and on to the canvas whilst peripherally [regarding] the contribution of this brush stroke within the context.

This routine is repeated until it quickly becomes a seamless steady series of movements - eventually completing the Painting to a perfect orchestration.

Intrigued? Inspired to learn more? Want to attend a class and see what you will manifest by negating the obdurate naysayer in you and opening up to the endless positive now? Please visit Ted’s website at  www.tedblackall.com/