The Horse and Cart Ferry
By Henry Lawson

Now this is a song of the ferry,
And a lay of the juice of the berry;
'Tis the ballad of Brown,
Who'd a business in town,
And commenced to go down
Very slow,
Don't you know?
By coming home just a bit merry.

By the Drunks' Boat-that's right-
On a Saturday night
He would often be past being merry;
With his back teeth afloat,
On the twelve o'clock boat,
And a spectacle there on the ferry
(A picture to all on the ferry).

But long before night
He'd most likely be tight,
And a subject and theme for George Perry;
And he'd cross to the Shore,
Somewhat worse than before,
And a nuisance to all on the ferry;
Singing-drunk on the passenger ferry.

And so it went on
Till his reason seemed gone,
And the Law, so it seemed, got a derry
On Brown. He went down,
And they sent him to town
One day, by "the trap," on the ferry-
The Government trap on the ferry.

He was sober and sane
When he came back again,
And the past he'd determined to bury-
Or, I mean, live it down-
And he crossed from the town
Like a man, on the passenger ferry.
(There were sceptical souls on that ferry.)

They say 'twas the jaw
Of his mother-in-law
Drove him back to the juice of the berry;
But he soon got afloat
On the passenger boat
Or adrift on the horse-and-cart ferry
(Wrongly called the ve-hic-ular ferry).

The drink had him fast,
And he drank till at last
He dried up-a withered old cherry;
And they thought him no loss
When they sent him across
In a box, on the cart-and-horse ferry-
In a low, covered trap on the ferry.

Which I rise to explain--
If the moral ain't plain,
And if you're a cove that gets merry--
Always stick, when "afloat,"
To the passenger boat;
Or else to the cart-and-horse ferry,
Or you'll make matters worse, like old Jerry.

From: Skyline Riders and Other Verses by Henry Lawson
In Full at: http://gutenberg.net.au/ebooks06/0607541h.html

THESE are songs of the Friends I neglected--
And the Foes, too, in part;
These are songs that were mostly rejected--
But songs from my heart. 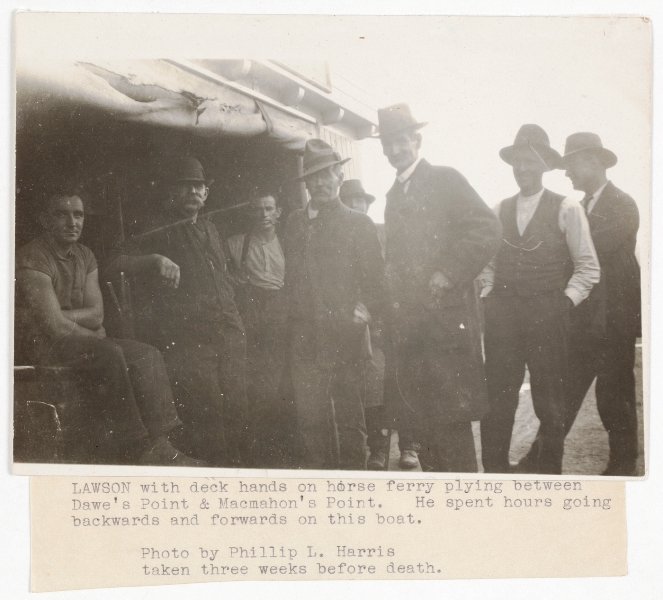 Photographs of Henry Lawson in North Sydney including his former residence, 1922?  photographed by Phillip Harris. Image a6161013, courtesy State Library of NSW.

LINKS WITH THE PAST.

The Horse and Cart Ferry.
(By "Redgum.")

When the Benelon and Bangaroo, the two old-time paddle-wheelers, which for 45 or 46 years have done good service carrying vehicles and passengers from the city to North Shore, tie up on the night of April 30,and finish the work for which they were built, another link in the old-day cable will have broken under the new-day strain ,and two more historic ferry steamers will be' added to the row of rotting harbour-going vessels, all of which have seen better days. Some other work might be found for the, old vessels to do, but the chance of further profitable employment on the waters of Port Jackson is only a slender one. Once the' ashes of the last fires are lifted out of the stokehold all the heart of the old vessels, will slowly wither away. 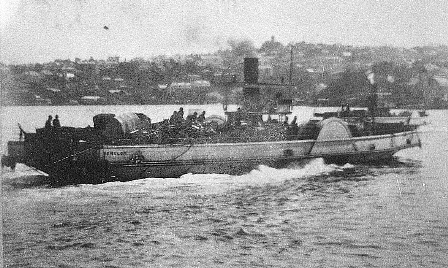 There was a time in the life of the Benelon and the Bangaroo when their skippers steered them with pleasure and pride. In 1885,¡ when Mr. David Drake, one of our cleverest builders, witnessed the trial trips of his latest creations, they were big ships for such1 work as was then being done on the "horse and cart" ferry. The name of steam punt was not in use in those days. That term was a latter-day creation. Punt only applied to a thing which had no power of propulsion. Both paddle-wheelers held conspicuous' places in the harbour trade, and were well thought of by the waterside fraternity and much respected by the boys who navigated cranky little dinghies through the rollers they left in their wake.

OTHER STEAMERS.
Other steamers have gone before them, in the days to come others also will be tied be-side them in some out of the way rotten row. Bad times and the building of the Sydney Harbour Bridge have altered, and will still alter, the harbour transport for passenger and vehicle alike.

Before the days of the Benelon and her mate other paddle-wheel steamers carried carts and horses across to North Shore, and carried them almost on the same track which these ancients travelled for so many years. The lowliest of the small vessels traded from Pottinger-street, off Windmill-street, on the Sydney side, to a wharf at Blue's Point, near to the docks where the steam punts load and unload their freights. 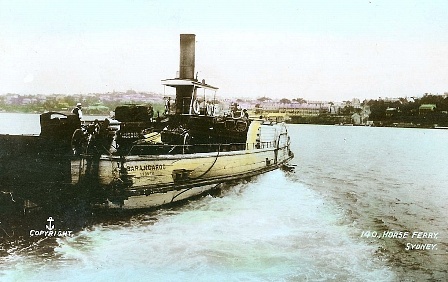 The actual date of the opening of the first ferry I am not able to mention. The beginning might have been made some time during 1847, when The Brothers, a 16-ton, two stemmed, side wheeler, with about eight or ten horse-power, took up the running under the command of Messrs. Gerrard Brothers, who for a long time were connected with the early ferry services. The Brothers, as far as I can learn, had the ferry work all to her-self for about eight years, and was allowed to spend her time between attentions to the ferry passengers and an occasional bit of towing for some of the queer old lime juicers of her day. At neither Job was she very proficient. She was just the best thing offering, and had to be made the best of. Passengers and drivers took their chances on a flush deck, unprotected from the weather, and paid well for the accommodation; the charge for pedestrians being 3d, for single horse vehicles and driver-horse and man were counted as one in those days-1/6; and for a two-horse vehicle 2/.

During 1855 a larger vessel, the Herald, one of our earliest iron ferry steamers, was built by a company to run with The Brothers in the North Shore trade. The steamer was brought from the Clyde in sections, and was pieced together in Campbell's Bight, on the northern extremity of the Quay, near where the  Government steamers and slip are now moored.

THE HERALD.
After a few years of service the original owners parted with the Herald, and she was taken over by Mr. E. Evans and Messrs. G.Hall and Son, for use on the same run and for tow work as well. The Herald did splendid service hi many ways. She had power enough to shift a bluff-nosed old whaler Into or out of Johnston's or Mosman Bay; she could carry the bullion to the P. and O. liners Avoca or Tanjore as they loaded at a buoy moored off Moore's wharf, eastward a little of Miller's Point, or she could carry the mail off an In-coming liner held up for inspection down about Watson's Bay. Mr. George Murden, theo ldest hand in the employ of the Sydney Ferries, Ltd., to-day, worked on both The Brothers and the Herald, and saw them both out of the service. It was the Herald which Mr. S. Russell, one of the earliest residents of Mosman Bay, hired occasionally to make a special trip from his home wharf at Mosman to Pottinger-street with his carriage and pair on a Saturday night, when his presence in the city was urgently necessary. Skipper, ship, and crew would wait and take the liberal, gentlemanly northsider back to his home again. Even the deck hand was remembered on those joyous occasions. Ferry work, towing, and any other job had to wait when Mr. Stuart Russell required the services of the Herald and her crew. 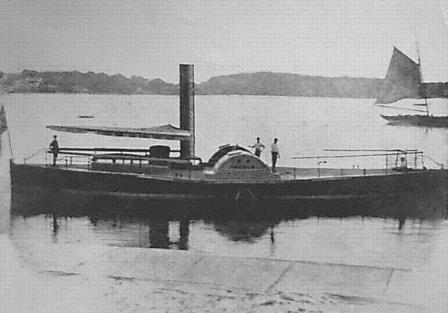 After the Halls had conducted the horse and cart ferry for some years, Mr. A. Milson entered the business, and opened up a trade between Milson's Point and a wharf at about the point where Macquarie-street now ends, between some sheds where the harbour police launches were moored and stored. He purchased a larger two-ended, side-wheeler named Transit, with 12 horse-power and about 50ffclong, from the Brisbane Ferry Company, and began operations some time during 1883. This vessel also was a flush-decked steamer, with no deck protection for anyone but the skipper and his mate. She did duty for many years after the Pottinger-street trade had been discontinued, and was known to everyone whose eyes and head were busy about the water-front. I think the Transit was displaced when the Benelon and the Bangaroo took up the trade between Milson's Point and the battery point from which one of the staunch old steamers took her name.

With the passing of these two paddle-wheel steamers another page 6.1 our port history passes away, but the mercury of these useful old vessels, their shape, their wash, and thelazy method of their coming and going will remain In the hearts and minds of many a watersider a long lot of days.

My story would not be complete without mention of three men who have spent the best part of their lives handling the engines of these almost out-of-date steamers. Their names are Mr. A. E. Pearse, who has practically retired from the shallow water work, and Messrs. George Hill and Joseph Cooney, who are still in charge of the cylinder and the starting bar. Each man has been in the service of the Sydney Ferries, Ltd., for nearly half a century. How many voyages they have made across the harbour they do not know.
But each in his own heart has a kindly place for the high or low pressure engine with which he has been associated for so many years. 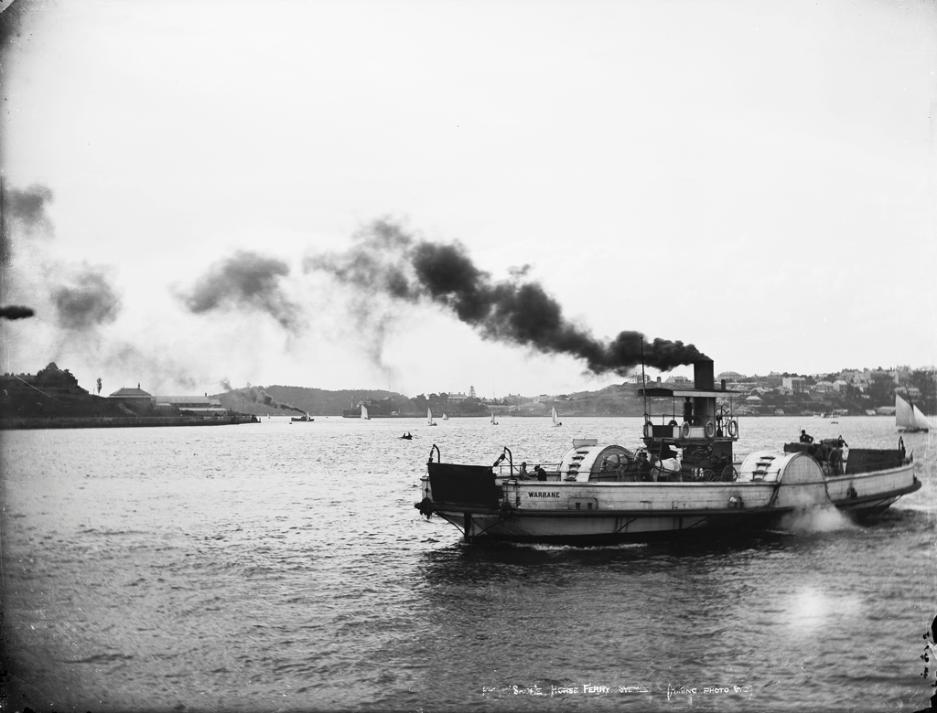 Above: North Shore Horse Ferry the Warrane - The paddle punt Warrane was built in 1883 and had an open wheelhouse. She was rated as being able to carry fourteen vehicles and up to 109 passengers." ref. Pictorial History of Ferries, Graeme Andrews, Reed 1982. Picture from Tyrell Collection of Powerhouse musueum on Flickr – image no 31606. Gift of Australian Consolidated Press under the Taxation Incentives for the Arts Scheme, 1985

Below: The horse ferry used to operate between Milsons Point and the west side of Fort Macquarie (Bennelong Point), from where this photo was taken. New South Wales. Department of Lands. Map of the city of Sydney, New South Wales [cartographic material] 1895. MAP RM 3443. Courtesy National Library of Australia 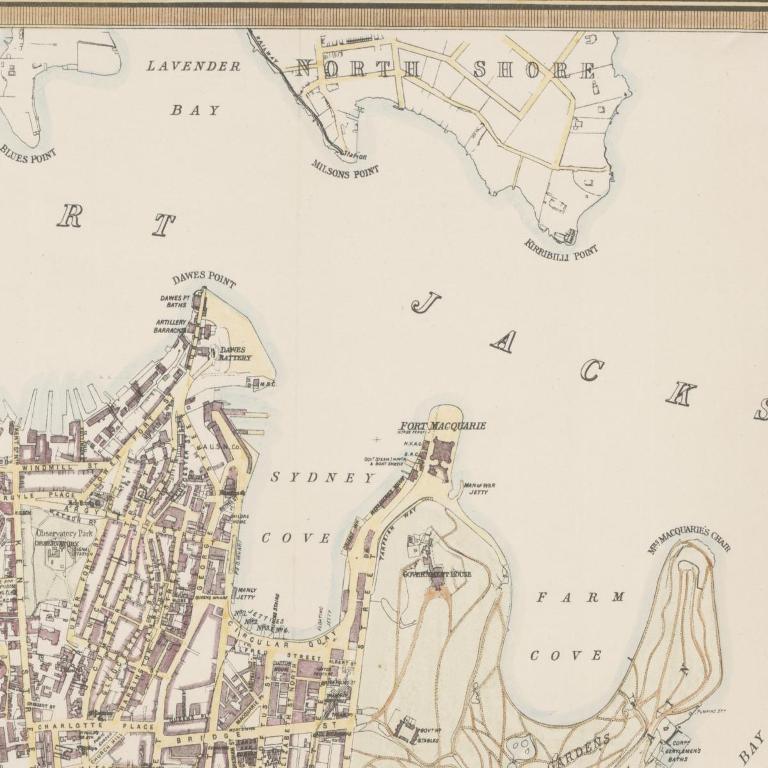