Right on cue the Feathertail Gliders have been sighted on Rocky Point. For the third year in a row the Gliders have appeared in Autumn to check out suitable nesting boxes for the winter.

This time they’ve come slightly earlier - April instead of the May. In past years they have hung around until September or October so it will be interesting to see if the same rough seasonal pattern holds true this year.

That means it’s definitely time to clean out the boxes, get rid of the ants, dislodge those spiders and put some inviting fresh bark scrapings, or scrunched up leaf material, or the soft inner bristles of the banksia flower, to provide a suitable bed for our smaller marsupials for these cold winter months.

In fact local polymath, Alan Yuille, tells us that it is likely to be the lower over-night temperature that drives them down from the escarpment at this time despite the plentiful nectar up there throughout winter.

And it’s not just the Feathertail Gliders in search of a warm bed by the coast. Mel Broughton reports her first sighting this year of a Pygmy Possum nest. This nesting box has been a favourite wintering hole over the last 2 years. Part of the attraction may be that the box is attached to a NSW Christmas Bush, which is also the nest material. Obviously the Pygmy Possums are time and motion students.

Jude James reports that the schedule seems to be purring along and that the new box numbers have already proved their worth. However be warned. Now that boxes are becoming active we may need to reschedule your camera time so that we can keep a camera on an active box.

As Project members will recall, we do have 3 nesting boxes up on the escarpment under the eagle eyes of our Sugar Glider Squad. One of the reasons for putting the boxes up there was to try to confirm that our small marsupials were choosing to live up there over summer and not just in another Bay.

In December Sugar Glider Squad member Ruby Cummings spotted something in one of the boxes and managed to take the photo below. A positive I.D. has proved illusive, but our best guess is a Pygmy Possum. (When I say ‘our best guess’ I mean of course Ecologist and Project Mentor Alf Britton)

The Squad subsequently trained a camera on the box in use. Sadly, this camera was stolen 2 weeks ago. It’s a short sharp lesson to us all that despite our best efforts at camouflage, nowhere is free from small opportunistic crimes, not even on these isolated shores.

Pandy, the Black Footed Tree Rat from Queensland was up to his old tricks

His peanut obsession, if anything, has got worse.

The visit was under the auspices of Taronga Zoo Senior Keeper the wonderful Wendy Gleen. Her knowledge and affection for all the mammals in the Nocturnal House felt like world’s best practice as did her rapport with the Squad. Our Sugar Glider Squad activities regularly feature in Wendy’s talks to school groups as she spells out some of the possibilities for those kids who wish to learn more about their natural surroundings.

It made us all feel very proud of our team.

Our visiting PhD candidate, Kobe Martin, has discovered that the repertoire of the Feathertail Gliders contains a really wide variety of sounds which is exciting but requires a lot more work. She also reports that they have a strange ear canal. This suggests that these Gliders might have higher frequency hearing than expected which introduces another more unexpected line of investigation.

‘My equipment only records up to 22 kHz’, said Kobe ‘and I've been thinking of setting up a recorder used for recording bats to see if they're producing any really high frequencies. It could be very exciting... or it could be nothing’.

And that’s all the news from the Nesting Boxes for now. Fingers crossed for those winter visitors…

While Feathertail Gliders, Antechinus and Pygmy Possums are all likely inhabitants - the monitoring team have set their sights on being the first to report and photograph the presence of Sugar Gliders in this area.

The ultimate goal is to report a sighting to the Atlas of Living Australia (www.ala.org.au ) joining other ‘Citizen Scientists’ in providing an ongoing record of biodiversity throughout Australia.

Last year (2016) year we have had two nesting boxes used continuously from May to October. Both nesting boxes (Sarah Gardner’s and Hazel Sullivan’s) are located on the north-facing side of Lovett Bay and both recorded a predominance of Feathertail Glider sightings with the occasional Pygmy Possum appearance.

Another 3 boxes have had nests made by some very camera-shy inhabitants.

Then we had the Broughton and Hoffmann Mace properties that have encampments of Feathertail Gliders marching across their roofs almost every night while ignoring the comfort of the comfortable nesting boxes on a nearby Christmas Bush and Banksia. 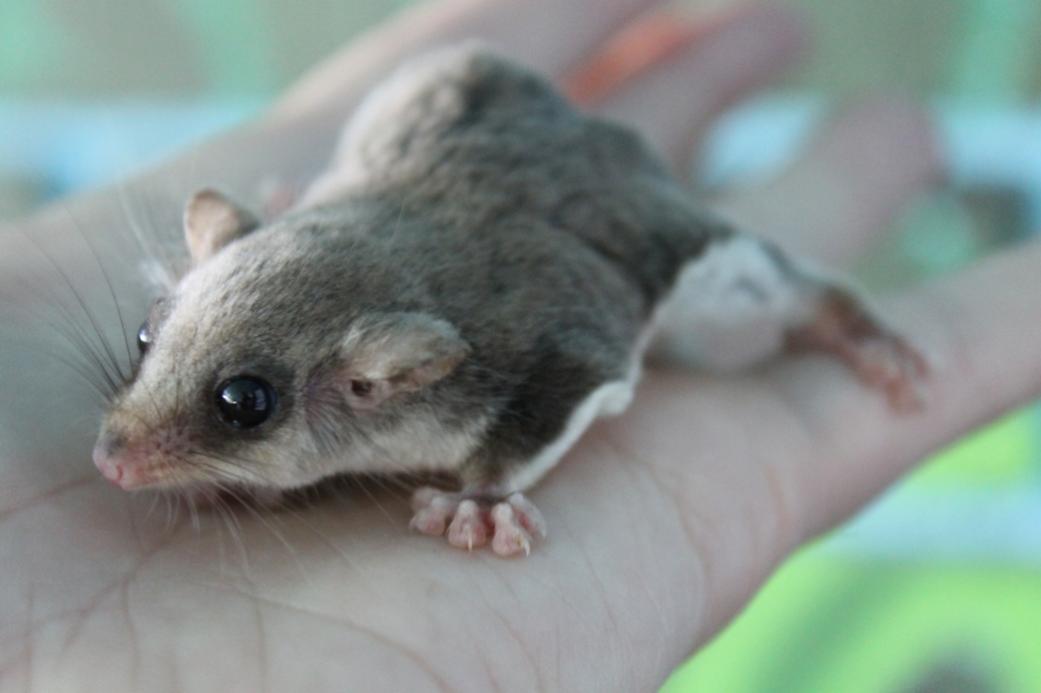