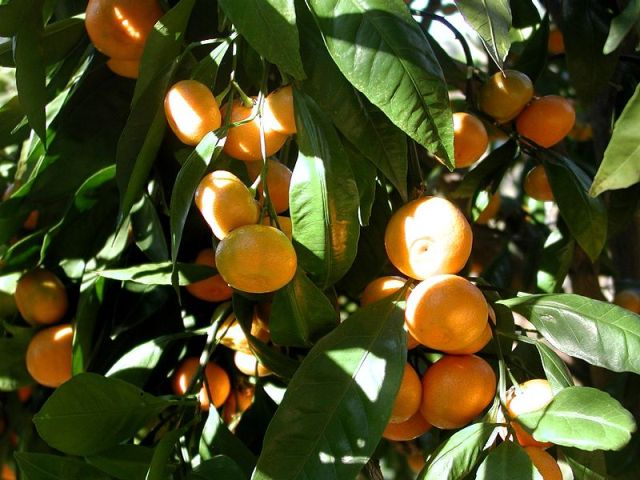 Thinned skin very sweet Mandarins are in markets at present at just over two dollars a kilogram and are great for warding off sniffles caused by Spring fluctuating temperatures of 34 degrees one day and 2 degrees the next. Filled with Vitamin C and fibre they are also a great digestive aid. Although they have a Chinese name they are said to originate from Japan, where the region of Satsuma was the first to export varieties to western cultures.
This week we share a little of the culture of this old citrus fruit and a few favourite recipes

For marinade, in a small bowl, combine the first nine ingredients. Pour 3/4 cup into a large resealable plastic bag; add the duck. Seal bag and turn to coat; refrigerate for 8 hours. Cover and refrigerate remaining marinade.
Drain and discard marinade. Transfer duck to a 1-1/2-qt. slow cooker; add reserved marinade. Cover and cook on low for 4-5 hours or until tender. Skim fat.
In a small saucepan, saute mushrooms and green pepper in butter. Combine the cornstarch, ginger and milk until smooth. Stir into mushroom mixture; add to slow cooker.
Cover and cook on high for 45 minutes or until sauce is thickened. Just before serving, stir in oranges. Serve with rice if desired.

Cointreau is a brand of triple sec (an orange-flavoured liqueur) produced in Saint-Barthélemy-d'Anjou, France. It is drunk as an apéritif and digestif. Use a small sharp knife to split the vanilla bean lengthways without cutting all the way through. Scrape the seeds into a large sauce- pan. Add the vanilla bean, caster sugar and water. Stir over low heat, uncovered, until the sugar dissolves.
Increase heat to high and bring to the boil. Add the mandarins and return to the boil. Reduce heat to medium-low and simmer, uncovered, turning once, for 10 minutes or until the mandarins soften slightly. Use a slotted spoon to transfer to a large serving dish.
Increase heat to high and bring syrup to the boil. Boil, uncovered, for 6-7 minutes or until it reduces by half. Pour over the mandarins. Allow to cool. Use electric beaters to whisk the cream and icing sugar in a medium bowl until firm peaks form. Stir in the Cointreau. Serve the mandarins drizzled with the syrup remaining in the dish and accompanied by a dollop of cream.

The Mandarin orange, also known as the mandarin or mandarine (both lower-case), is a small citrus tree (Citrus reticulata) with fruit resembling other oranges. When exporting began, local Mandarin oranges were named after their port of origin. The mandarin orange is a variety of the orange family. Cultivars and crosses between the original mandarin and other citrus fruits include:

Satsuma (Citrus unshiu), a seedless variety, of which there are over 200 cultivars, such as Owari and mikan; the source of most canned mandarins, and popular as a fresh fruit due to its ease of consumption
Owari, a well-known Satsuma cultivar which ripens during the late fall season
Clementine, sometimes known as a "Christmas orange", as its peak season is Winter; becoming the most important commercial Mandarin orange form, having displaced mikans in many markets
Tangerine sometimes known as "Dancy Mandarin"
Tangor, also called the temple orange, a cross between the Mandarin orange and the common sweet orange; its thick rind is easy to peel and its bright orange pulp is sour-sweet and full-flavored 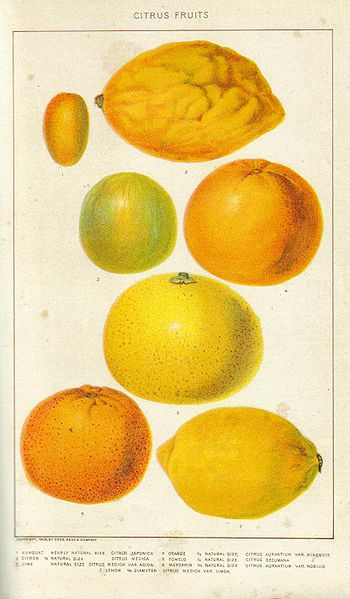 In traditional Chinese medicine, the dried peel of the fruit is used in the regulation of ch'i, and also used to treat abdominal distension, to enhance digestion, and to reduce phlegm. Mandarins have also been used in ayurveda (traditional medicine of India). Mandarin oranges, particularly Satsumas from Japan, are a Christmas tradition in Canada, as well as the United States. They are commonly purchased in 5- or 10-pound boxes, individually wrapped in soft green paper, and given in Christmas stockings. This custom goes back to the 1880s, when Japanese immigrants began receiving Japanese mandarin oranges as gifts from their families back home as gifts for the New Year. The tradition quickly spread among the non-Japanese population, and Eastwards across the country: each November harvest, "The oranges were quickly unloaded and then shipped east by rail. 'Orange Trains' - trains with boxcars painted orange - alerted everyone along the way that the irresistible oranges from Japan were back again for the holidays. For many, the arrival of Japanese Mandarin oranges signaled the real beginning of the holiday season."  This new tradition merged with older traditions related to the Christmas stocking. Saint Nicholas is said to have put gold coins into the stockings three poor girls so that they would be able to afford to get married. Sometimes the story is told with gold balls instead of bags of gold, and oranges became a symbolic stand-in for these gold balls, and are put in Christmas stockings in Canada along with chocolate coins wrapped in gold foil. Importation of these Japanese oranges was suspended due to hostilities with Japan during World War II. While they were one of the first Japanese goods allowed for export after the end of the war, residual hostility led to the rebranding of these oranges as "Mandarin" oranges.  The delivery of the first batch of mandarin oranges from Japan in the Port of Vancouver, British Columbia is greeted with a festival that combines Santa Claus and Japanese dancers -- young girls dressed in traditional kimonos.

During Chinese New Year, Mandarin oranges and tangerines are considered traditional symbols of abundance and good fortune. During the two-week celebration, they are frequently displayed as decoration and presented as gifts to friends, relatives, and business associates.

This mandarin is the famous and highly important Unshû mikan(Unshiu) of Japan.  The name satsuma, by which it has become known in the Occident, is credited to the wife of a United States minister to Japan, General Van Valkenberg, who sent trees of it home in 1878.  Satsuma is the name of a former province, now Kagoshima Prefecture, on the southern tip of Kyushu Island, where it is believed to have originated.   According to Ziegler and Wolfe (1961), the first recorded introduction into the United States (Florida) was by George R. Hall in 1876.

At the dawn of modern horticulture in Japan, five kinds, groups, or varieties of unshu mikans were recognized, three of the names of which refer to localities or districts, one to season of maturity of the fruit, and the other to antiquity of origin.  These horticultural groups are as follows:

1. Wase (Early)—All early-ripening clones were placed in this group irrespective of origin, known or otherwise.  Indeed, all varieties of Unshû are classified into two groups—Wase Unshû (earliest to ripen, hence very early) and Unshû (ripening later, but still early).  More recently the latter has been subdivided into the intermediate or midseason varieties—Nakate Unshû—and the late ripening varieties—Futsu Unshû.  Wase itself is therefore not a horticultural variety but constitutes a group of very early ripening varieties, each of which carries its own name.  In general, however, these varieties are distinctively different from the typical Unshû.
2. Zairai (Native, indigenous, or old)—This group is said to include what are considered to be the oldest clones of unknown parentage or origin.  Thus, Miyagawa, currently the most important of the Wasevarieties, is known to have originated as a limb sport in a Zairaitree.  Zairai does not exist as a named variety, however, though Zairaiclones as a group are usually seedy and inferior in other respects.  They are reported to have originated mainly in Fukuoka Prefecture of Kyushu Island where the Unshû was early taken from Satsuma Province.
3. Owari (an old province on Honshu Island, now Aichi Prefecture)—This group, much the most important, represents an old clonal variety which early became popular and predominant in Owari Province and may have originated there, although it is thought to have come from Ikiriki of Nagasaki Prefecture.  Because of its excellence, it spread throughout the country and until approximately 1940 was virtually the only variety planted commercially.  Since World War II, however, the plantings have been restricted largely to derivative varieties known to have originated as bud mutations in Owari trees.  Owari itself seems no longer to be propagated as a clonal variety, though it still comprises the bulk of the production.  As a group it is characterized by good tree vigor and productivity and flat fruit of good quality which, because of the firm consistency of the flesh and tough carpellary membranes, is especially suitable for canning.
4 and 5. Ikeda and Ikiriki (town or village names in Osaka and Nagasaki Prefectures)—These groups seem also to represent old varieties of local origin no longer propagated, though old plantings still exist—of the former, on Shikoku Island and in nearby Wakayama Prefecture on Honshu Island; of the latter, mainly in Saga and Nagasaki Prefectures of Honshu Island.
Ikeda is reported to be characterized by small, subglobose, and virtually seedless fruit of mediocre quality and relatively late maturity.  The trees of Ikiriki are said to be small, compact, and not very productive, but the fruit is reported to be seedless and of excellent quality.
Extracts from: The History of Satsuma By: The Citrus Industry, Volume I, Chapter 4, Horticultural Varieties of Citrus. Robert Willard Hodgson

Not to be confused with the Mandarin Duck!
The Mandarin Duck (Aix galericulata), or just Mandarin, is a medium-sized, East Asian perching duck, closely related to the North American Wood Duck. It is 41–49 cm long with a 65–75 cm wingspan. The species was once widespread in eastern Asia, but large-scale exports and the destruction of its foresthabitat have reduced populations in eastern Russia and in China to below 1,000 pairs in each country; Japan, however, is thought to still hold some 5,000 pairs. 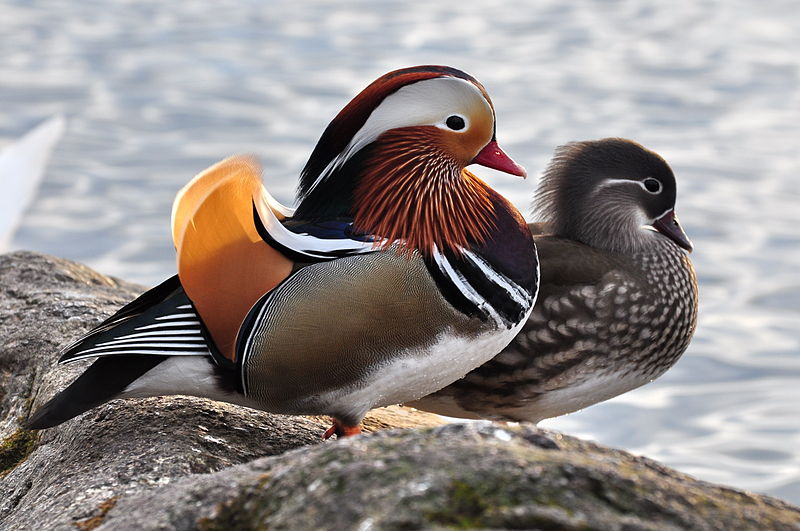 Mandarin Ducks are referred to by the Chinese as Yuan-yang (traditional Chinese; pinyin: yuān yāng), where yuan and yang respectively stand for male and female Mandarin Ducks. In traditional Chinese culture, Mandarin Ducks are believed to be lifelong couples, unlike other species of ducks. Hence they are regarded as a symbol of conjugal affection and fidelity, and are frequently featured in Chinese art.
A Chinese proverb for loving couples uses the Mandarin Duck as a metaphor: "Two mandarin ducks playing in water". The Mandarin Duck symbol is also used in Chinese weddings because in traditional Chinese lore, they symbolize wedded bliss and fidelity.
Because the male and female plumages of the Mandarin Duck are so unalike, yuan-yang is frequently used colloquially in Cantonese to mean an "odd couple" or "unlikely pair" – a mixture of two different types of same category. For example, the drink yuan yang and yuan-yang fried rice. For Koreans, Mandarin ducks represent peace, fidelity, and plentiful offspring. Similar to the Chinese, they believe that these ducks mate for life. For these reasons, pairs of Mandarin ducks called wedding ducks are often given as wedding gifts and play a significant role in Korean marriage.