SYDNEYSIDE SONGS.
No. 6.-REVISITINGS.
New ferries swing at Circular Quay,
New motors pack the swarming ways.
We see, but see them not, for we
Gained long ago the Inmost maze.
And hearts that here learned other days
Need little that the new can teach.
Careless what keels be now afloat,
We take, It seems, a phantom boat
For Manly beach.

For us the chattering crowds are not;
Back in our Village by the Sea,
We find some old familiar spot
Where peace, or dreams of peace, may be.
And northward lie, a kingdom free,
Lagoon and headland, mile on mile;
Still Curl Curl laps the lazy spray.
Still swims in blue at Broken Bay
The Lion Isle.

A score of years are shed like leaves;
Again with wondering eyes we grope.
Mist draws us on to golden eves.
Morn wakes us with whole earth for scope.
Here, with a world to win, came Hope,
And drank desire, and doubt, and dread.
Here, here was Fancy's Spanish Main
And middle age finds youth again
By Middle Head.
LANCE FALLAW.

SYDNEYSIDE SONGS.
NO. 5.-WATERWAYS.
I met a little raindrop
up on the Great Divide
I said, "Good day.
And what's the way
By which you hope to glide?
I guess you'll get a yard or two."
But said the little drop:
'I mean to go to Sydney,
The whole road to Sydney,
And nowhere short of Sydnev
Will I ever, ever stop."

So I laughed, but he left me:
He splashed from his leaf.
And lie met a merry brother.
And they travelled with each other
A grassy road and brief
Down a slope with many more,
Till they found a running brook:
And bank-high for Sydney,
By creek's bed for Sydney,
A brimming band for Sydney
Their pilgrimage they took

Oh, the pert little raindrop.
He swam by himself.
He led the rank.
Thro' Hawkesbury banks.
A racing river elf
Past Windsor and past Wiseman's
Till he came to Broken Bay:
And southward bound for Svdney
Past Lion's Isle to Sydney
( It's rougher now lo Sydney,
And saltier grows the spray.)

And so at last the raindrop.
With many millions more.
Mixed In the sea
Goes rolling free
To break on Sydney shore.
And a proud ship above them.
The North Head past.
Rides the king tide to Sydney,
The hundredth league to Sydney:
So they that fared for Sydney
Are together there at last.
LANCE FALLAW.
SYDNEYSIDE SONGS. (1930, May 3). The Sydney Morning Herald (NSW : 1842 - 1954), p. 11. Retrieved from http://nla.gov.au/nla.news-article16688209

I saw Australia's self, a spirit serene.
Was it where crowding peaks
Build the last, ridge that seeks
To make a couch on which broad heaven may lean?

Or where all sky presses the endless plain,
Save for one outlaw hill
Day-long pursued, until
Just as eve dies we catch It by the mane?

Then, as her gaze cut clean into my heart
With sword of stars, I cried:
"Hero must my steps abide,
Lest ever from my soul the spell depart."

But answered me the wind that was her
breath:
"Rather go hence, and bear
My accolade everywhere,
Since, having seen, thou knowest me to the
death.

"Whether thou seek the silent northern sea,
Or tread the city's ways,
Or thread the bushland's maze,
I and my chosen shall encompass thee.
"No rivers, no wide wastes, no rampant range
Shall sunder those, my sons,
For whom the record runs
Writ In the secret seals that mock at change. 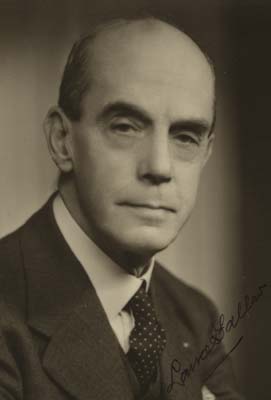 Lance Fallaw (1876-1959), born Gateshead, England, joined the staff of the Rockhampton Daily Record in 1908 after a period as a newspaperman in South Africa. He was later editor of the Charters Towers Telegraph, Cairns Post, Geelong Advertiser and associate editor of the Sydney Morning Herald (1929-1936). He published a collection of verse, Silverleaf and Oak (1906), before he arrived in Queensland; later volumes of poetry were The Ampler Sky (1909), Unending Ways (1926) and Hostage and Survival (1939).
JOURNALISTS; LUNCHEON.

Mr. Lance Fallaw (president of the N.S.W. Institute of Journalists) and Mrs. Fallaw,who are about to leave Sydney on a tripabroad, will to-day be entertained at luncheon by the institute at Farmer's. JOURNALISTS' LUNCHEON. (1937, February 26). The Sydney Morning Herald (NSW : 1842 - 1954), p. 7. Retrieved from http://nla.gov.au/nla.news-article17299405