The Australian King Parrot (Alisterus scapularis) is endemic to eastern Australia and found in humid and heavily forested upland regions of the eastern portion of the continent, including  eucalyptus wooded areas (wet sclerophyll forests like those in Pittwater) as well as in subtropical and temperate rainforest. They feed on fruits, seeds or small insects. The Australian King Parrot was first described by the German physician, explorer, zoologist, herpetologist and naturalist Martin Lichtenstein in 1818. Lichtenstein was responsible for the creation of Berlin's Zoological Gardens in 1841, when he persuaded King Frederick William IV of Prussia to donate the grounds of his pheasantry. 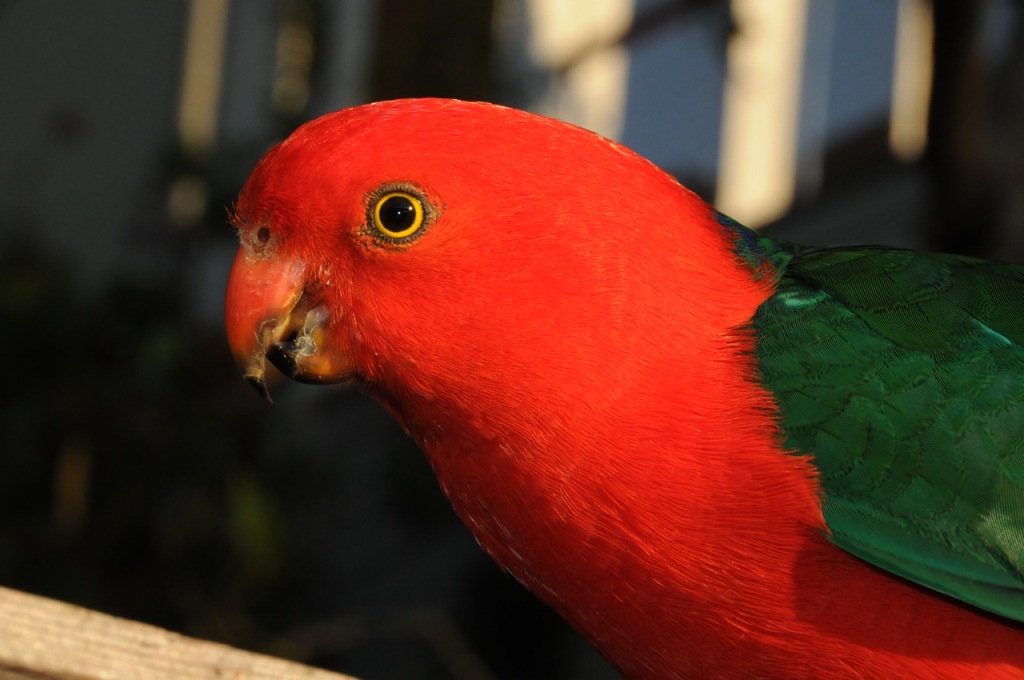 Adults King Parrots of both sexes are approximately 43 cm (17 in) in length from head to long tail. The adult male has a red head, breast, and lower undersides, with a blue band on the back of the neck between the red above and green on the back. The wings are green and each has a pale green shoulder band, the tail is green, and the rump is blue. The male has a reddish-orange upper mandible with a black tip, a black lower mandible with an orange base, and yellow irises. The plumage of the female is much different to the male having a green head and breast, a grey beak, and the pale shoulder band is small or absent. Juveniles of both sexes have brown irises and a yellowish beak, and otherwise resemble the female. Australian King Parrots range from North and Central Queensland to Southern Victoria. They are frequently seen in small groups with various species of rosella. 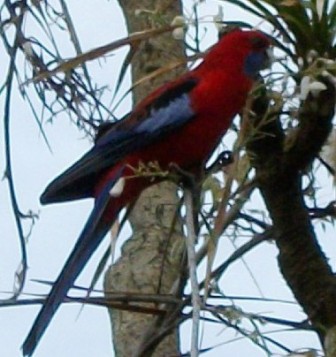 The adult Crimson Rosella, (Platycercus elegans), is similar to the male Australian King-Parrot, but differs by having blue cheeks, shoulders, and tail, a whitish, rather than red, bill and a dark eye. Immature Crimson Rosellas also differ from female and immature King-Parrots by having blue cheeks, a whitish bill and a more yellow-green rather than dark green colouring. King-Parrots lay their eggs on a bed of decayed wood-dust at the bottom of a deep hollow in the trunk of a tree. Often the entrance is high in the tree (10 m) but the eggs are near the ground (0.5 m). The one pictured here was looking into one of our hollowed out Spotted gum trunks in the front yard, possibly as a new nesting site.

Interestingly, although King-Parrots appear distinctly red and green to humans, when viewed under ultraviolet light, some feathers on the wings appear with a prominent yellow glow. Many birds have four types of cone in their retina, (compared to only three in humans) and see into the ultraviolet wavelengths. Their calls are a loud, high-pitched whistle, with a rolling "carr-ack" call in flight.

Female King Parrot by Adrian Boddy showing patches without melanin; in these cases feathers are orange to yellow. This is quite unusual for these birds.

All Photographs by Adrian Boddy and A. J. Guesdon, October 2012. All Rights Reserved.