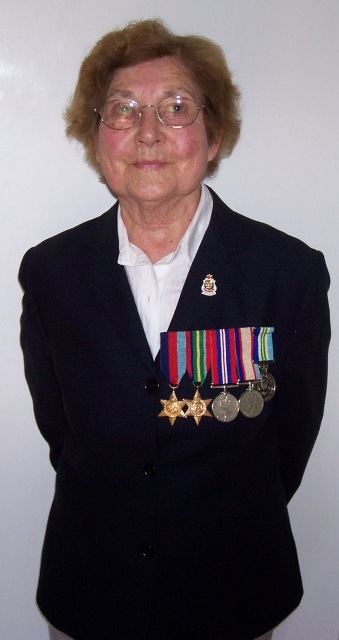 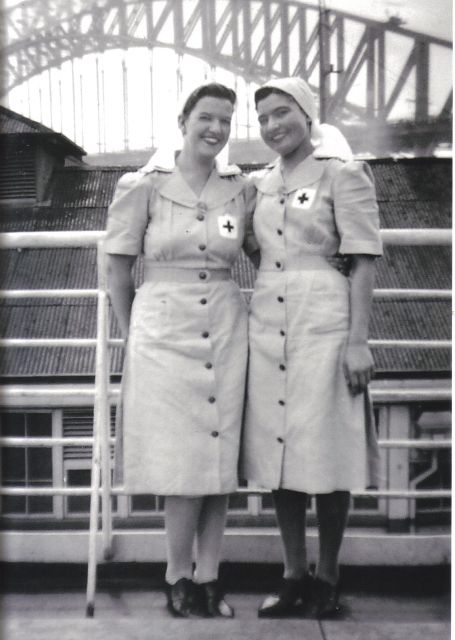 Above:  Joan and Peg in their Red Cross uniforms. Below: 1947 Bride. 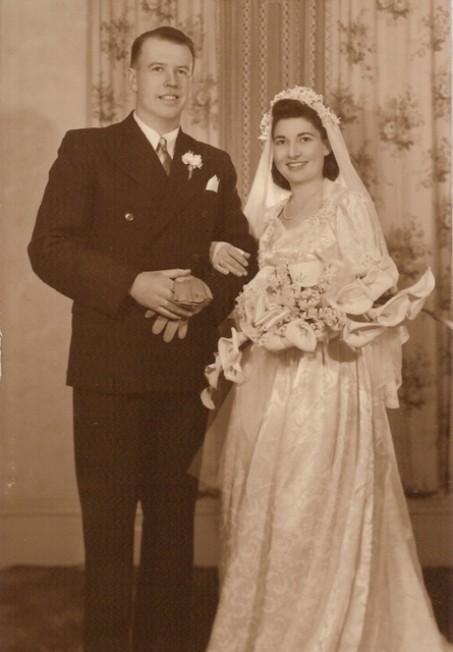 I wrote Come With Me – on a journey with one of the last surviving nurses who dedicated her life and love to service on a hospital ship and other AGH's in World War 11, the story of Joan Fisher along with Joan after she made contact with me as President of the Society of Women Writers in 2009. When she told me the name of the hospital ship, the Oranje, my ears pricked up as I too had been on that ship as a 21 year old, cruising around the Pacific. When she stated that she had also nursed on the Atherton Tablelands I was astounded as I had lived in Herberton on the Tablelands as a young girl. Was this serendipity? Was I meant to write this story? I believe so.

Joan and I have been on a remarkable journey. I interviewed her to get more details of her life from her handwritten note book in beautiful copperplate handwriting. Joan enlisted as a 21 year old, after becoming a VA (voluntary aid for the Red Cross) volunteering her services at various Sydney hospitals in her spare time. After enlisting she was sent to Kenmore hospital (outside Goulburn) to get it ready to take our wounded soldiers. It was here that she went that one step further in her cleaning of a vestibule that took matron's attention and she decided Joan would be included in the nurses to go on the hospital ship.  Joan felt it was an honour to be chosen and always felt she had God on her side through the dangerous times.

The Oranje had been given to the Australian and New Zealand governments as a hospital ship and Holland even paid for the refurbishment. The ship made many trips to Aden to pick up English and Australian wounded soldiers and transport them to hospitals in Durban in South Africa. Once the war in Africa was over, the Oranje made its final journey back to Australia via New Zealand. Once back in Sydney it was decided that Joan and her fellow VA's would now have to become AAMWS (Australian Army Medical Women's Services) and do a rooky course which the girls found quite hilarious. They wondered how all the marching and rock climbing was going to assist their nursing.

It was while doing this course that Joan found out about the sinking of the Centaur which had half their crew from the Oranje aboard. She lost many good friends that day. Only one nurse survived, Nell Savage. Joan finds it hard to talk about even today as her orderly George Ockwall of whom she was very fond, died also, along with Matron Jewell. It is wonderful that the ship has been located and will forever be a memorial to the lost souls on board that dreadful day. Joan then nursed the wounded coming back from New Guinea on the Atherton Tablelands in a tent hospital. Here they were called upon to provide entertainment for our troops who were training there to go into the jungles in New Guinea to fight the Japanese.

After the war was over Joan and her fellow nurses were sent to Borneo to nurse the prisoners of war who were in a pitiful condition. Joan saw some dreadful sights as these poor soldiers as well as civilians and children were brought to their hospital to be fed and cared for until well enough to be repatriated.

Once their duty in Borneo was over Joan came back to demobilize as she did not want to remain in the army or to continue nursing. Joan and her fellow nurses found it difficult for quite a time as their families did not want to talk about the war. Many hours were spent on the telephone to nursing friends who understood each other's situation. Not long after, Joan met Mac Fisher, a school teacher and it wasn't long before Mac asked Joan to marry him. Mac was sent to many different schools as headmaster and Joan taught sewing. They had two sons, John and Les.

Joan became very interested in spinning and weaving, having helped the occupational therapist with this craft on the hospital ship. Later she became the President of the Spinners and Weavers Guild for many years.

Joan feels her story needs to be told to honour those she worked with, those she nursed back to health and to those who died. She especially wrote it for the young students who study WW 1 and 11 and to whom she has spoken many times about her experiences in recent years at the Miranda RSL Club. I asked Joan what Anzac Day means to her and she replied, 'It means a lot to all Australians because our fighting men in all wars helped keep our country free.' Joan also remembers the mateship and realising that human beings can be so close to each other and her proudest moments were nursing the sick and injured back to health as well as holding the hand of someone who was dying. Joan still marches every year on Anzac Day with the children of the Centaur victims. As Joan said 'it was an honour to nurse the wounded men' and I say it was an honour to write Joan's story. It is truly inspirational.

In the June honours list for 2011 Joan was awarded the OAM of which she is very proud. Well done Joan, it is truly deserved.

Ed.: We rang Joan to ask her for her 'motto for life' and she kindly related how she had recently been in the city and watched a young woman in her twenties moving along the street, with a poodle in a pram, asking passers by for change as she and her dog could not find anywhere to live. Joan saw people ignore her and was saddened that so many could not 'put themselves in other's footprints' nowadays. Joan, being the generous soul she is, gave this young woman what coins she had. Her motto or the phrase she considers her favourite and one she lives by:

Do unto others as you would have them do unto you

Joan's book Come With Me has been re-printed and is available at Dymocks at the Warringah Mall and from Pam Bayfield on her web site – www.pambayfield.com.au. 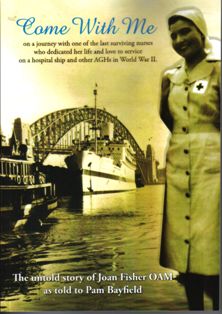 Recent OAM Recipient Joan Fisher shared her story of Nursing in the Defence Forces with local writer Pam Bayfield who then wrote Come With Me. To Celebrate her award this book has been re-released and is available at http://www.pambayfield.com.au/ and at Berkelouw Books in Mona Vale.