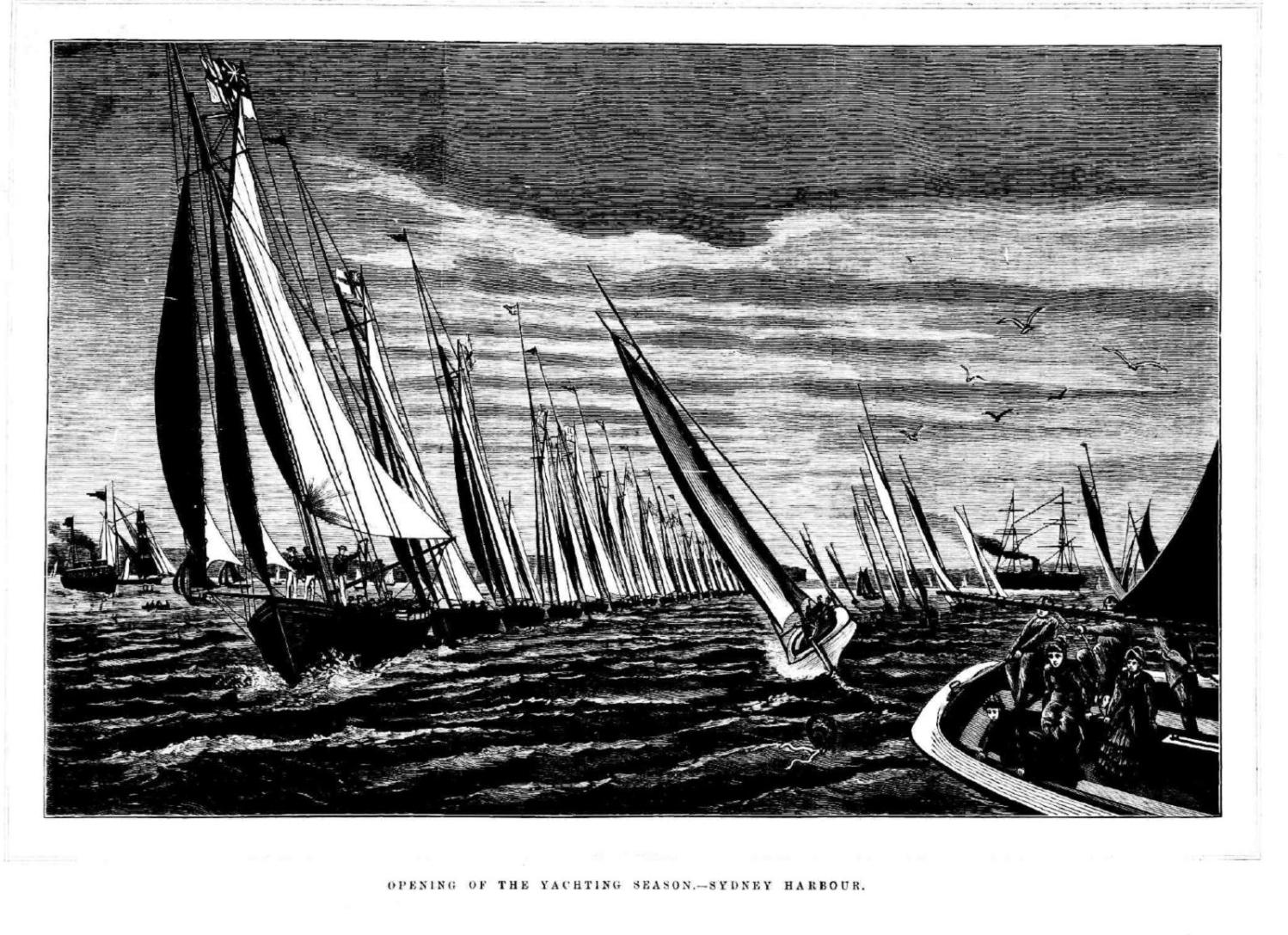 While researching an upcoming History page and the beginnings of sailing regattas in Sydney when this city was a mere town, colony and an outpost of the British Empire, we came across the below article and above accompanying engraving print. The sight of these aligned vessels makes us wonder if this is how the International Fleet Review, to celebrate the centennial of our own Royal Australian Navy, will look. There are many ways you may particpate in this, apart from being a spectator. The Australian Maritime Musueum's HMB Endeavour, a replica of the original Captain Cook vessel, is offering places (see Events page for details) and there are bound to be Manly Ferries you can get a place on during the review as well as other activities, displays and vessels that will be made available to visit and view.  We're already excited and looking forward to this one and shall find some interesting background histories during the coming months to share with you. There may be 128 years between these two events but it will be the same harbour and the same seasonal winds for all sailors!

On another note, this year's Avalon Tattoo, which in the rota of Army, Air Force and Navy, will see a celebration of all things nautical on the green at Avalon on Saturday 15th of June, 2013 and we will be focusing on the Navy in Pittwater to whet your appetite in May 2013's History pages. There's some pretty interesting people and events that have occurred here from settlers days up until quite recently.

At any rate, for all you who would rather be on the water, a small insight into our past and details of the International Fleet Review follow:

Opening of the Yachting Season.

THE opening of the yachting season was formally inaugurated by a great and exceedingly interesting demonstration on Saturday, 3rd October. There was a large muster of yachts and sailing boats, and the scene presented was at times very striking, and one of the most beautiful ever witnessed on the waters of Port Jackson. The day was somewhat dull, with a cloudy sky, a circumstance that, perhaps, made the aquatic pageant less bright and brilliant than it might have appeared in the full brightness of the early summer sun. But, apart from this consideration, the condition of the weather was much pleasanter, both for those engaged on the water and for the onlookers from the shore. The fine engraving which we give in this issue graphically illustrates a phase of the interesting scene. The following remarks in reference to the event are extracted from the columns of our leading morning contemporary of the 5th October :

" The yachtsmen and boat-sailers of Sydney Harbour are to be congratulated on having at length arrived at a general-agreement in regard to the formal opening of the aquatic season, as indicated in the combined demonstration which took place on Saturday last to celebrate the beginning of the season 1885-86.Hitherto it has been the custom for each of the various clubs to hold an opening demonstration of its own.' This custom may be regarded as anomalous, except in so far that as it has a bearing upon the commencement of the programme which each club may have arranged for the season. In so far as the evolutions and banquet which visually mark the opening day are intended as a welcome offering to the favourable breezes and sparkling waters of the summer, anything which will tend to make that celebration more imposing and attractive should follow as a matter of course. There is general unanimity as to the time , when we may once more go afloat in flannel and jersey, and where the pleasures of sailing form such a prominent branch of amusement it is only natural and appropriate that the whole community of sailors should join in a demonstrative expression of their satisfaction. at resuming their beloved sport ; in fact it may be wondered at that a combined demonstration on such occasion had not become the rule long ago.. But, now that it has been established, we may expect to see the yachting season ushered in each year with a carnival worthy of the character of the sport and of the position of the boat-sailing community in Sydney. And as the undertaking becomes more popular, provided that novel features are introduced, it may take some more attractive form than the procession and evolution of a combined squadron, until it takes rank as an aquatic event second only to the national regatta itself.

The demonstration on last Saturday was decidedly a success, in the face of a few circumstances which acted against it. Such, for instance, was the fact that many boats have not yet been put in commission for the season, so the muster was not so large, either of yachts or sailing boats, as on the last occasion when the boats held a combined fete. The weather was also, to some extent, against the affair from a popular point of view, as the grey sky looked threatening, and the southerly wind blew rather cold. This did not, however, prevent the attendance of a considerable number of ladies on board many of the boats taking part in the procession, and for sailing purposes the breeze was very suitable. The weather and some counter attractions, may also have reduced the number of onlookers, who were conveyed 'by the steamer Admired, but the boat, as it was, had a fairly full compliment. Several other steam launches followed the evolutions. The boats, to the number of about 50 assembled off Fort Denison at about half-past two, and the water from Farm Cove to Kirribilli was dotted with all kinds of sail. Shortly after this, on the arrival of Commodore Fairfax, the boats formed squadron in obedience to the signal from the Magic, and spread themselves out in a pretty line following the commodore along under the pressure of a stiff breeze till the squadron reached the Sow and Pigs. Here the head of the line waited for a few minutes to allow the other boats to close up, and then went over to Watson's Bay, where the Magic turned again up the harbour, flying the signal to form two lines astern of the divisional leaders.

The formation was well carried out, and presented an attractive spectacle. It was preserved during the passage up the harbour to H. M.S. Nelson, where the squadron again formed lines astern of the commodore, and rounded the man-of-war. On again reaching Watson's Bay, the commodore went about, and signaled the squadron to form line abreast to starboard. This brought the boats well up together, but the line could not be well dressed, owing to the difficulties of the breeze. The squadron again went under the stern of the Nelson, exchanged salutes as they passed, and then as in any of the boats as could remain in the water went over towards the rendesvouz at Double Bay, where they received the signals to salute and part company. The clubs represented were the Royal Sydney Yacht Squadron, in which were merged the yachts of the Prince Alfred Yacht Club, the Sydney Amateur Sailing Club, and the Double Bay Sailing Club. The leaders were Magic, commodore's boat ; Waitangi, starboard divisional leader ; Peri, port divisional leader. A well-got-up programme of the proceedings, printed by Mr. E. Smith, was published for general information." Opening of the Yachting Season. (1885, October 24).Illustrated Sydney News (NSW : 1853 - 1872), p. 11. Retrieved from http://nla.gov.au/nla.news-article64036647

From 3–11 October 2013 the International Fleet Review will offer a spectacular program of naval events to celebrate the centenary of the Royal Australian Navy’s fleet arrival in Sydney Harbour on 4 October 1913. On this day, the flagship HMAS Australia led the new Australian Fleet of seven cruisers and destroyers (HMA Ships Melbourne, Sydney, Encounter, Warrego, Parramatta and Yarra) into Sydney Harbour for the first time.

Vice Admiral Griggs said the International Fleet Review would be the nation’s most significant commemorative naval event in the past 100 years. The Royal Australian Navy will be represented by at least 17 ships and submarines from across the Navy.

A significant naval aviation component is also planned with more than a dozen current and former naval aircraft types represented, including the Australian Fleet Air Arm’s current Sea Hawk, Squirrel, Bell 429 and MRH90 helicopters alongside historic aircraft from Navy Historic Flight. Tall ships from around the world will embark on an exciting journey to Australia to help celebrate the centenary of the Royal Australian Navy’s fleet entry into Sydney Harbour. Australian and foreign tall ships will visit Fremantle, Melbourne and Hobart prior to gathering in Sydney on 3 October 2013 then take part in a special regatta race to Auckland, New Zealand.

Many of the Australian and international warships will participate in Exercise TRITON CENTENARY off the east coast of Australia and visit other Australian ports before and following the International Fleet Review. From: http://www.defence.gov.au/defencenews/stories/2012/oct/1023.htm

The International Fleet Review is being held to commemorate the centennial of the arrival of the Royal Australian Navy Fleet in Sydney on 4 October 1913. On this date, the flagship HMAS Australia led the new Australian Fleet of seven cruisers and destroyers into Sydney Harbour for the first time. The Australian Fleet was greeted by thousands of cheering citizens lining the foreshore and this was a moment of great national pride and importance, one recognised as a key symbol of Australia’s progress to nationhood.

The International Fleet Review is a significant commemorative event for the nation and the state of NSW. It is the Royal Australian Navy’s flagship event for 2013. It is anticipated that 40 warships and at least 12 tall ships will participate. This historic event is being held in partnership with the NSW Government and City of Sydney.

Visit the Schedule of Events page for a full listing of all planned events. 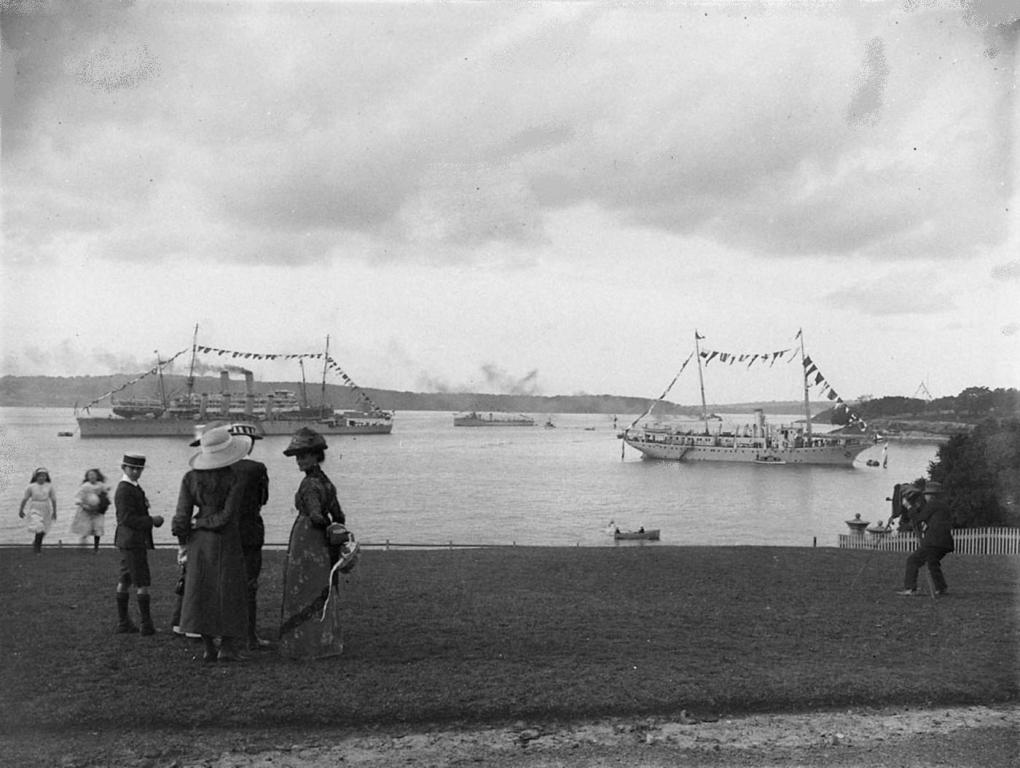 Taken from lawns of Government House Sydney late on the day of the battlecruiser HMAS AUSTRALIA [I]'s arrival and the RAN's first Fleet Entry, this photo has that Edwardian feeling - the Governor's elegantly dressed guests relaxing at the end of an exciting day. Still fully animated however is the photographer on the right who has eyes only for the ladies of the Harbour. Is it perhaps the famous Sydney ships photographer Sam Hood himself? The photograph is attributed Hood - but we're wondering if he has somehow used a colleague to get himself in the picture.

Meantime, on the left here is a Modified Town Class cruiser, which must by HMAS MELBOURNE [I] or HMAS SYDNEY [I], with a unidientified passenger steamer approaching Fort Denison In the middle of the picture is one of the River Class destroyer torpedo boats, which must be HMAS PARRAMATTA or HMAS YARRA. We have had the handsome vessel on the right is the identified as the RN steam survey sloop HMS [later HMAS] FANTOME, but the SLNSW records identify it as the German yacht 'COMET [sic] it was KOMET, the German New Guinea colonial administrator's yacht which the descrptive notes suggest has been sent for the occasion. Ironically, KOMET was captured by the RAN in New Guinea a year later after the outbreak of WWI, and became the patrol sloop HMAS UNA, and postwar pilot vessel AKUNA.