Fennel
A Winter vegetable, this ancient bulb is packed full of what you need to ward off sniffles at this time of year and can be used in a salad, for those of us longing for something lighter this close to Spring, or in soups, curries or simply braised. There are also many recipes that have come to Australia from other cultures and involve using the leaves as well as the seeds.

If you ever find any growing, and it is considered a weed in Australia, the seeds and stems have a sweet aniseed flavour which has been used for centuries as a breath freshener. In Ancient Rome it was considered the herb of eyesight and more recent studies have shown it may work to clear glaucoma.

Leek and Fennel Soup
2 tablespoons olive oil
3 large leeks, cleaned and thinly sliced
4 large stalks celery, thinly sliced
3 large white onions, peeled and halved
1 large fennel bulb, thinly sliced
2 large baking potatoes, peeled and cut into 1/2-inch cubes
1 tablespoon salt
1 1/2 teaspoons ground black pepper
8 cups water
2 vegetable stock cubes
Put the olive oil, leeks, celery, onions, fennel, potatoes, salt and pepper in a large pot and cook until the onions are translucent and the vegetables have begun to soften; about 10 minutes.
Pour 8 cups of water over the vegetables, bring to a boil, reduce the heat, and drop in the vegetable bouillon cubes. Simmer over low heat, stirring occasionally to dissolve the cubes, until the vegetables are tender and the potatoes have begun to thicken the soup, about 30 minutes.

__________________________________
Fennel (Foeniculum vulgare) is a flowering plant species in the celery family Apiaceae or Umbelliferae. It is the sole species in the genus Foeniculum. It is a hardy, perennial herb with yellow flowers and feathery leaves. It is indigenous to the shores of the Mediterranean but has become widely naturalized in many parts of the world, especially on dry soils near the sea-coast and on riverbanks.
It is a highly aromatic and flavorful herb with culinary and medicinal uses and, along with the similar-tasting anise, is one of the primary ingredients of absinthe. Florence fennel or finocchio is a selection with a swollen, bulb-like stem base that is used as a vegetable.
Fennel is used as a food plant by the larvae of some Lepidoptera species including the mouse moth and the anise swallowtail.
The word "fennel" developed from the Middle English fenel or fenyl. This came from the Old English fenol or finol, which in turn came from the Latin feniculum or foeniculum, the diminutive of fenum or faenum, meaning "hay". The Latin word for the plant was ferula, which is now used as the genus name of a related plant. 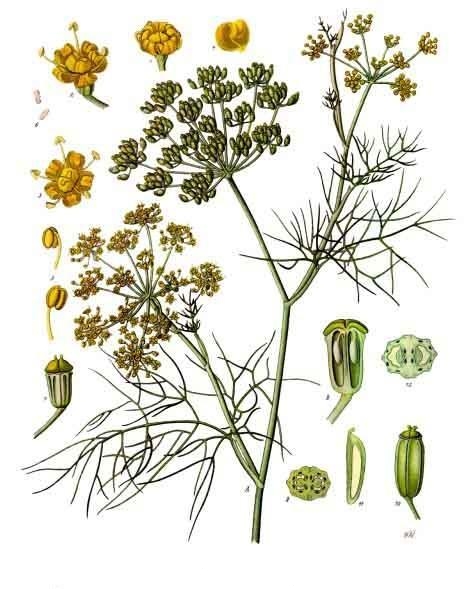 As Old English finule, fennel is one of the nine plants invoked in the pagan Anglo-Saxon Nine Herbs Charm, recorded in the 10th century.
In Greek mythology, Prometheus used the stalk of a fennel plant to steal fire from the demigods. Also, it was from the giant fennel, Ferula communis, that the Bacchanalian wands of the demigod Dionysus and his followers were said to have come.
The Greek name for fennel is marathon (μάραθον) or marathos (μάραθος), and the place of the famous battle of Marathon (whence Marathon, the subsequent sports event), literally means a plain with fennels. The word is first attested in Mycenaean Linear B form as  ma-ra-tu-wo.
The name Funchal, was applied by the first settlers that landed on its shores due to the abundance of wild fennel where, as tradition goes, the primitive burg was built. From the Portuguese word "funcho" (fennel) and the suffix "-al", to denote "a plantation of fennel":
"...Funchal, to whom the captain gave this name, because it was founded in a beautiful forested valley, full of fennel up to the sea..."

Florence fennel (Foeniculum vulgare Azoricum Group; syn. F. vulgare var. azoricum) is a cultivar group with inflated leaf bases which form a bulb-like structure. It is of cultivated origin, and has a mild anise-like flavour, but is sweeter and more aromatic. Florence fennel plants are smaller than the wild type. Their inflated leaf bases are eaten as a vegetable, both raw and cooked. There are several cultivars of Florence fennel, which is also known by several other names, notably the Italian name finocchio. Foeniculum vulgare 'Purpureum' or 'Nigra', "bronze-leaved" fennel, is widely available as a decorative garden plant.
Fennel has become naturalised along roadsides, in pastures, and in other open sites in many regions, including northern Europe, the United States, southern Canada, and much of Asia and Australia. It propagates well by seed, and is considered an invasive species and a weed in Australia.
Many cultures in India, Pakistan, Afghanistan, Iran, and the Middle East use fennel seed in their cookery. It is one of the most important spices in Kashmiri Pandit and Gujarati cooking. It is an essential ingredient of the Assamese/Bengali/Oriya spice mixture panch phoron and in Chinese five-spice powders. In many parts of India and Pakistan, roasted fennel seeds are consumed as mukhwas, an after-meal digestive and breath freshener.
Fennel leaves are used in some parts of India as leafy green vegetables either by themselves or mixed with other vegetables, cooked to be served and consumed as part of a meal. In Syria and Lebanon, the young leaves are used to make a special kind of egg omelette (along with onions and flour) called ijjeh.
Many egg, fish, and other dishes employ fresh or dried fennel leaves. Florence fennel is a key ingredient in some Italian and German salads, often tossed with chicory and avocado, or it can be braised and served as a warm side dish. It may be blanched or marinated, or cooked in risotto.
In the Indian subcontinent, fennel seeds are also eaten raw, sometimes with some sweetener, as they are said to improve eyesight. Ancient Romans regarded fennel as the herb of sight. Root extracts were often used in tonics to clear cloudy eyes. Extracts of fennel seed have been shown in animal studies to have a potential use in the treatment of glaucoma. Fennel may be an effective diuretic and a potential drug for treatment of hypertension.
Historical anecdotes suggest that fennel is a galactagogue, improving the milk supply of a breastfeeding mother. This use, although not supported by direct evidence, is sometimes justified by the fact that fennel is a source of phytoestrogens, which promote growth of breast tissue. However, normal lactation does not involve growth of breast tissue. Two case reports resulted in illness for the newborn child: Both mothers had been drinking more than 2 liters daily of an herbal tea mixture reportedly containing licorice, fennel, anise, and Galega officinalis. The authors attributed the maternal and infant symptoms to anethole, which is found in both fennel and anise; however, the anethole levels were not measured in breastmilk, nor were the teas tested for their content. Symptoms resolved in the children after their mothers discontinued the teas.
Syrup prepared from fennel juice was formerly given for chronic coughs. It is one of the plants which is said to be disliked by fleas, and powdered fennel has the effect of driving away fleas from kennels and stables.
Fennel. (2014, August 2). In Wikipedia, The Free Encyclopedia. Retrieved  from http://en.wikipedia.org/w/index.php?title=Fennel&oldid=619524417 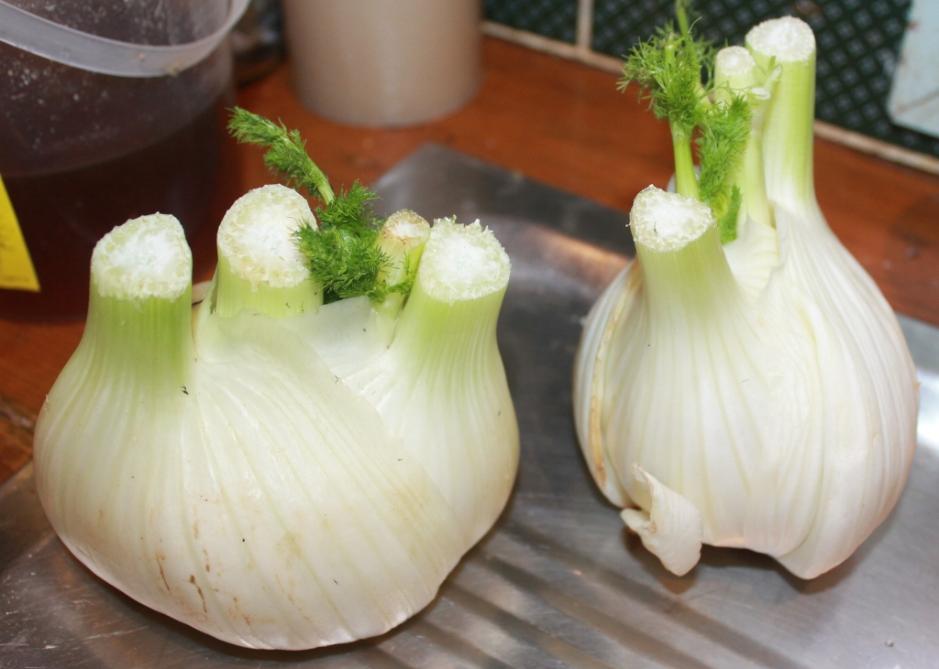