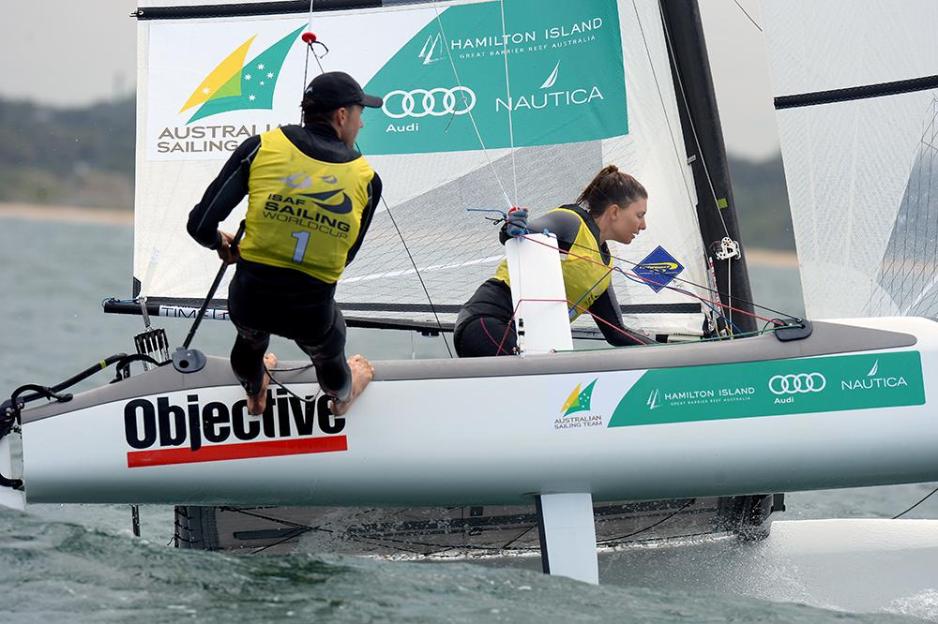 A second and final set of medal winning performances brought the 2014 ISAF Sailing World Cup Melbourne to a close on Sunday December 14.

Some of the day’s highlights on the Stadium course included Tom Burton’s trifecta of gold medal Laser wins at this World Cup event, the Australian identical twins out-sailing the Portuguese brothers in the 470s and the final epic Finn grudge match between Great Britain’s Ed Wright and Oli Tweddell that went the Brit’s way.

Racing began in cool and gusty southerly 15-20 knot winds on Port Phillip Bay and similar to yesterday’s first round of Medal Races dialed back to light and patchy by the time the top ten Laser Medal Race contenders took their starting positions.

Unlike Saturday the fan cranked back up again to a consistent 17 knot and the Medal Race sequence carried on without delay through to perfect regatta closer, the final Men’s and Women’s Kiteboard Medal Race in brilliant summer sunshine and 20 knots.

Hundreds of competitors are this evening making their way home, whether driving a couple of kilometres to a nearby suburb or boarding international flights back to one of the 33 countries with their flag flying proudly at the longstanding World Cup host, Sandringham Yacht Club.

The following sailors have qualified in Melbourne either as class winners or the home country representative for the Abu Dhabi Final, from October 29 – November 1, 2015;

Australian Sailing Team (AST) athletes and cousins, Jason Waterhouse and Lisa Darmanin, were the powerhouse multihull crew at the ISAF Sailing World Cup Melbourne. Their ample point advantage going into the Medal Race meant the gold medal was already theirs. Up the track from them in the Medal Race and before a full house at Sandringham Yacht Club, a thrilling sail-off for second unfolded.

“We had a big point advantage so we just went out there to get around the course and stay out of trouble,” said Darmanin. “We tried to sail our own race and put a bit of action in there for the spectators. We are really happy to come home with the gold; it’s a really good way to start the season, to get back on top of the podium.

“I was pretty disappointed we couldn’t make Abu Dhabi, now we know we’ve qualified it will be nice to put that one on the calendar and to lock it in,” Darmanin added.

The dynamics in a two-person boat can’t be underrated. Waterhouse says Lisa’s structured approach and his natural instinct are complementary. “We know the dynamic is a huge thing, we see it as an advantage for us.” From this first round of the 2015 World Cup Waterhouse says their takeaway is trialing new sail, rig and board configurations, and their heavy air boat speed.

Olympic silver medallists and AST teammates, Darren Bundock and Nina Curtis, finished silver medallists by one point. “It’s our first week back since the championships in Santander,” said ‘Bundy’.“This week has been a good mix of conditions. We still have a few challenges to go. Jason and Lisa are sailing really well and that lifts the bar for us.”

It was game on between brothers Alexander and Patrick Conway (AUS/ASS) and the Portuguese team of Antonio and Joao Rosa in the Medal Race. The wind was up to 15 knots from the SW by the time the men’s and women’s fleet lined up for the final battle.

The Rosas had the advantage at the start, but the Conways went tack-for-tack with them to gain the advantage by the top mark the second time around. From there they blasted down the last run and across the finish line, leaving the rest of the fleet well clear.

Their Medal Race victory assured them of the first Men’s 470 qualifying slot for the 2015 ISAF Sailing World Cup Final in Abu Dhabi in 2015.

“It’s been a very good battle all week; we have been very close to each other every race. It’s been exciting, and interesting,” Patrick said. “We are excited and relieved. It’s really exciting for us to have qualified. It’s another regatta where it’s going to be the top 15 or 20 boats in the world, it’s going to be a Medal Race every single race.”

It might have been a two-boat race, but Sasha Ryan and Amelia Catt (AUS) still pushed their hardest racing in among the men’s fleet. They won the Medal Race while two-time Australian Olympian Jeni Lidgett-Danks and her crew Jaime Ryan (AUS) finished with a U flag penalty.

Both Ryan and Catt were surprised by the news that their result secured them the first Women’s 470 qualifying spot for the 2015 ISAF Sailing World Cup Final in Abu Dhabi.

“We've only just teamed up earlier in the year so it has all been about processes and building the team at this regatta,” Ryan said. “We feel like a lot of things have come together this week and it’s been good to race with the boys. I think they’re a little bit more aggressive than the women usually. It’s been a real challenge for us, but really good fun too,” Ryan added.

“It’s awesome to qualify for the World Cup final and we’re really excited. It's a big bonus for us and something to work towards over the next year.”

The contest in the big man’s division at the World Cup between Ed Wright, his mate and former countryman now living in and sailing for Australia, Oli Tweddell, and 21 year-old Jake Lilley captivated the boat park and the following international audience.

Prior to the pointscore leader Ed Wright (GBR) and second-placed Oli Tweddell (AUS) leaving the boat ramp, the housemates for the week openly discussed their strategy and the fact they were both gunning for the win. Tweddell, the hometown hero, was sick of finishing runner-up at his local regatta and Wright, on form in a borrowed boat, had no qualms relegating Tweddell to the silver medal position for the fourth consecutive year.

“Oli was the only threat I had to cover. I didn’t care about winning the Medal Race, but I did!” Wright said on his way to the medal presentation at SYC.

On the conditions Wright said, “the first upwind was really lovely with breeze up to 20 knots, then it dropped out. I was quite upset because when we were out there practising before the start the downwind conditions were epic. In the race I managed to hold onto the lead and cover Oli quite tightly on the on the second beat, then pulled away in some nice waves. I chartered a boat and the old girl went well this week…. I think I might take her home with me,” he joked.

“I should have given him a worse boat, it was already leaking but I should have made sure it leaked a bit more,” offered the good natured Tweddell, silver medallist and Australia’s country qualifier for Abu Dhabi. “Ed sailed really all week he didn’t drop out of the top two, he deserved the win. I’ve been working on quite a few things with my coaches and on my fitness. I’ve got a lot more work to do to get to where I want to be. I’m stoked about qualifying for Abu Dhabi.”

Tweddell is an ISAF Sailing World Cup - Melbourne ambassador with this message, “Melbourne has hosted a great event yet again. It’s great to see so many international sailors here racing in the full range of Melbourne conditions. Hopefully next year we can get more of the overseas Finn boys and internationals from other classes.”

Third overall at the end of the Finn’s eight race series was Jake Lilley (AST).

World number one Laser sailor Tom Burton wore the yellow pointscore leader vest from day two onwards. Lemon yellow turned to yellow gold when Burton stood on the dais to accept the highest honour at the opening round of the 2015 World Cup series, his third consecutive gold medal in Melbourne.

Burton had the series and his trifecta of wins sewn-up prior to the Medal Race, commenting, “it was pretty interesting, we launched in 20 knots and big waves and winds and we were watching the Finns duke it out then the breeze shifted and died. We raced at 5 knots or even less. I sailed well all week, Abu Dhabi was a good lead up for here. It’s good to qualify for Abu Dhabi next year and be able to defend the title.”

Second placed by 21 points was ASS athlete Matt Wearn who believes Burton is beatable. “I think I’ve proved he can be beaten. We were closer in the stronger winds. Another year of sailing is my best shot. Today was light airs and close racing. I’m happy to consolidate for second and to go into next year fighting and ready to take him [Tom] on. Things get heated out on the water as you’d expect when it’s tight racing but on shore we are good mates and it’s great for the team to have good training partners going into 2016.”

The final Olympic class Medal Race for the 10 Laser Radial sailors from the qualifying series went head-to-head in a fast race. Alison Young (GBR) came to the start line with an unassailable pointscore lead, but there was a good chance of the minor podium places shuffling as the talented fleet took off in fresh conditions.

“It was quite a tricky Medal Race we had there,” Young suggested. “It was pretty light beforehand and then the breeze pumped in and there were pretty big gains on the right hand side. It was quite tense on the first beat,” Young said.

On securing a place in the ISAF Sailing World Cup Final she added, “it’s a nice way to end the year, or start the season, depending on how you want to look at it. I am pleased about how the week has gone. I will take the lessons from here forward.”

Holding onto second overall after a disappointing final race was Tatiana Drozdovskaya (BLR) and the bronze medal went to Norway’s Line Flem Host.

Ashley Stoddart (AUS) was the best placed Australian, finishing fourth overall and qualifying for the Laser Radial class at the Abu Dhabi Final given her country hosted this World Cup round.

The Men’s and Women’s Kiteboard fleet put on a spectacular exhibition in the pressured-up conditions on the Stadium course right in front SYC where those all packed up and enjoying some downtime gathered.

The top four in the Men’s 22-board fleet went through to the Medal Race. The fleet just couldn’t break Riccardo Leccese’s title hold, the Italian surging to take his tenth consecutive race win of the series and the gold medal.

The Women’s fleet was dominated by Ariane Imbert (FRA). In second place was Australia’s Lisa Hickman who was determined to compete today having missed the rest of the series nursing a tendon strain. Third overall went to fellow Aussie Gina Hewson.

Kiteboarding is part of the Melbourne Sailing World Cup and kiters will be at Weymouth and Portland, Great Britain and Abu Dhabi, UAE and possibly other rounds.