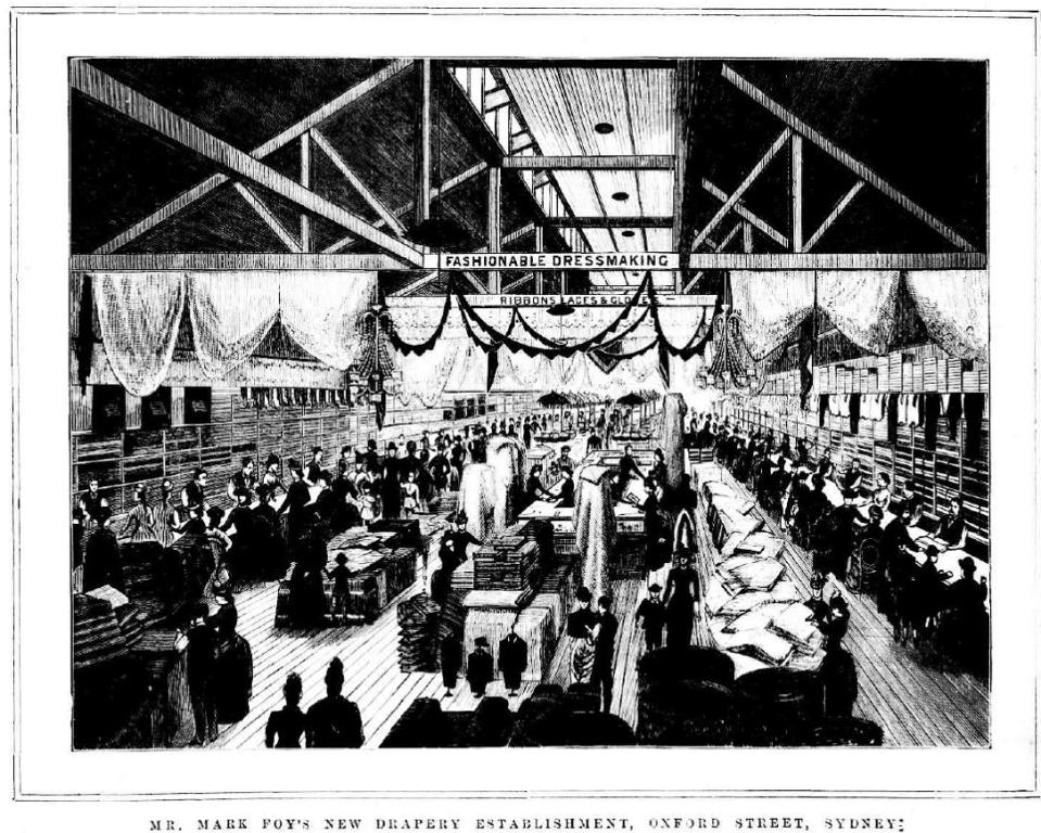 Emporium: Selling the Dream in Colonial Australia
by Edwin Barnard

A few weeks back a wonderful new book by Editor, Author, and Historian and Avalon gentleman, Edwin Barnard arrived at our office.

We last spoke with Edwin when the National Library of Australia had just released his book, Capturing Time - Panoramas of old Australia.

This new work is just wonderful and should appeal to all ages and both to those who love to shop as much as everyone who love all things historical and all the many items early newspapers in Australia advertised.

Advertisements can reveal a great deal about an age. Gleaned from the pages of long forgotten publications, such as The Sydney Gazette and New South Wales Advertiser, Australian Town and Country Journal and Australasian Sketcher with Pen and Pencil, together with dozens of regional newspapers, they paint an intriguing picture of the world of our great-great-grandparents. With over 450 images, this book is one to pore over and enjoy: perhaps that electric hairbrush really did cure baldness and wouldn’t it be wonderful of those strange cannabis cigarettes did relieve asthma? Advertisements for condoms? It was just a matter of knowing what to look for.

Look at the Hilzinger washing machine, costing £3 in 1880. It certainly seems rather primitive but did it get the clothes clean and how hard was it to operate? And what about Dr Allen’s belt, powered by the magic of electricity? Could it really help with rheumatism and lumbago, as its maker promised?

In some ways it is striking how little has changed. It comes as no surprise, for example, to discover that colonial women found it hard to resist a ‘bargain’, nor that they worried a great deal about their complexions and the ‘sweetness’ of their breath.

Colonial men had their own concerns, prominent among them those old bugbears of advancing baldness and retreating virility. For those seeking to revive flagging passions there were always the ‘racy’ tales advertised each week in the illustrated papers (price one shilling, posted in a sealed envelope).

Equally striking are the many differences in attitude and outlook revealed by old advertisements. It is curious, for example, that for most of the nineteenth century nobody—except perhaps the very young—seem to have been much concerned about body shape. It was only in the 1880s and ’90s that advertisements began to appear offering products designed to deal with ‘unsightly’ corpulence or to plump out that ‘underdeveloped’ bosom. It cannot have taken advertisers long to realise that they were onto a good thing exploiting those particular anxieties.

Emporium uses collections of advertisements as starting points in assembling a series of self-contained ‘snapshots’. Introduced by a section on shopping, a succession of double-page spreads, each with its eyewitness accounts and contemporary descriptions, work to paint a lively and entertaining picture of everyday life in the Australian colonies.

Although this is a book about advertising, it is really also all about the everyday lives of nineteenth-century Australians. The focus throughout is on the lives of so-called ordinary people—the working men, women and children whose struggles all too often merit little more than a footnote or two in many of our national histories. How did they go about getting married? How did they plan their families? How did they keep clean?

How did they cook their food? Advertisements can answer all these questions.

Humorous – quirky – fascinating – you will find this book compulsive!

We had to have a chat to Edwin about this new work:

What was the most unusual items or stories you found and why did you consider it so?

There are some pretty unusual items in the book but I suppose the 'electrical' garments spruiked in the 1880s and 1890s are probably the most bizarre. By then—having witnessed the introduction of the telegraph, the electric light and the telephone—it was beginning to dawn on the general public that electricity was set to change their lives. Few understood how electricity actually worked, so when manufacturers began marketing garments and appliances fitted with tiny 'galvanic batteries' it seemed at least plausible that electricity's 'magic rays' might have curative properties.

The 'electric' corsets, belts, pendants, insoles, hairbrushes and even toothbrushes that were marketed widely throughout Australia were, of course, entirely useless. Not that that troubled their promoters. Dr Scott's electric hairbrush—which, incidentally, contained a magnet but no batteries—was, according to its advertising, 'warranted to cure nervous headaches in five minutes, prevent falling hair and baldness, cure dandruff and diseases of the scalp, make the hair grow long and glossy, and immediately soothe the weary brain'! 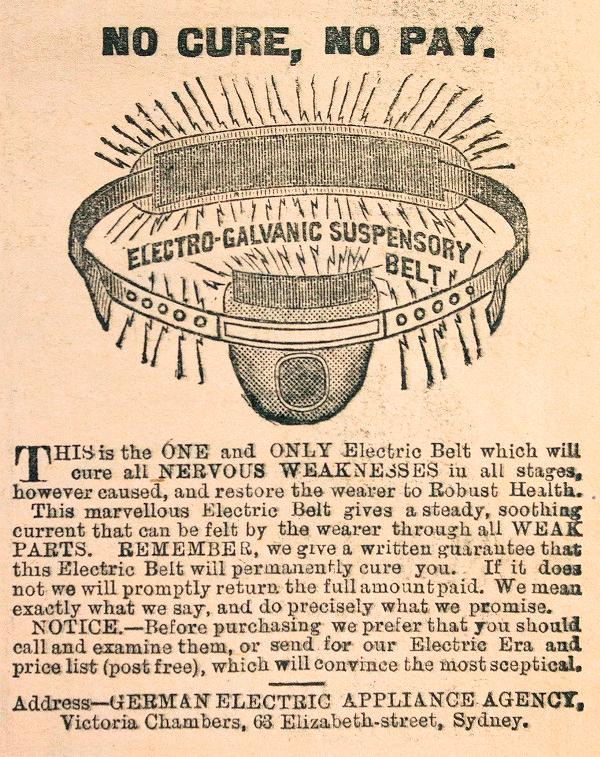 Please share an example of an advertisement/s  that shows how far we've advanced in medicines and how what was considered correct once has since been proved not so good;

Where to start! Colonial Australians were as gullible as we are when it came to their health, and just as keen to embrace concoctions that promised to cure, or at least alleviate the symptoms of the host of minor complaints humankind is heir to. A 'medicine' didn't have to actually do anything, it just had to promise to do something.

The three most widely advertised nineteenth-century medicines illustrate the point. Fortunes—literally tens of millions of dollars in modern terms—were spent advertising Beecham's Pills, Eno's Fruit Salt and Dr Williams' Pink Pills for Pale People. And what were the magic ingredients in these 'wonder' cures?

With no TV, and no Radio, Advertisements of the Colonial period were also an information service - how much of the social conditions of this time are reflected in these listings? - and please share two examples that are poles apart

Advertisements offer an interesting insight into the hopes, fears, anxieties and dreams of those they seek to influence. That was as true in the nineteenth century as it is today. Naturally enough, most money was spent trying to sell things to the well-to-do. The working class majority had trouble simply putting food on the table so there wasn't much point trying to interest them in the finer points of wallpaper design.

There is, however, one area where we do catch a glimpse of the social divide, and that is in the kitchen. Food had to be cooked, and away from the bush and a ready supply of free firewood there had to be a way of cooking it. Late nineteenth-century advertisements illustrate a fascinating range of stoves—everything from the giant coal-fired, cast iron ranges that dominated the kitchens of large houses to tiny spirit stoves costing only a few pence. One can only feel sympathy for the cooks—both the servant who had to sweat over the cast iron monster and the labourer's wife attempting to prepare a meal for eight over a single flickering flame. 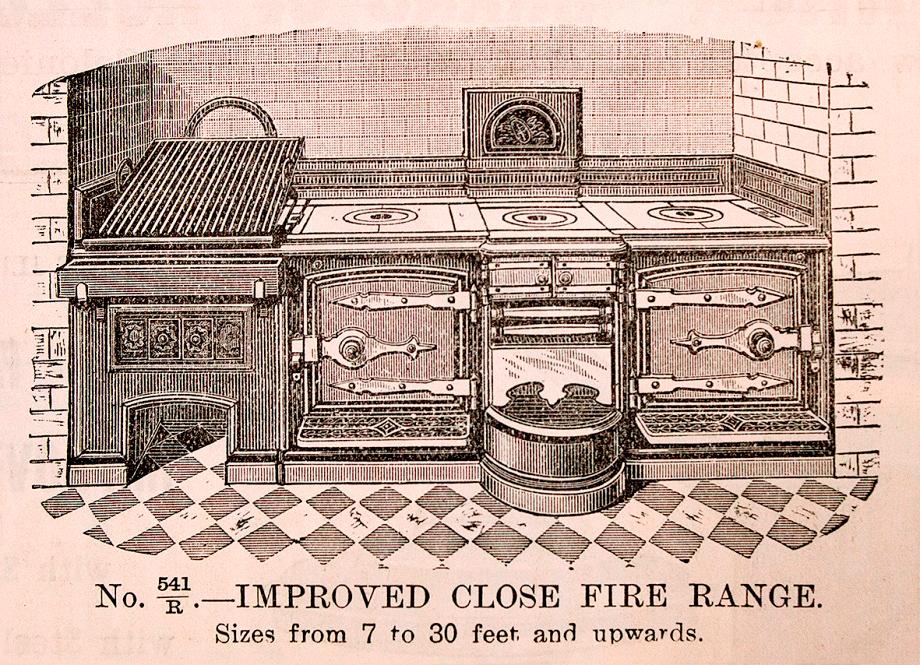 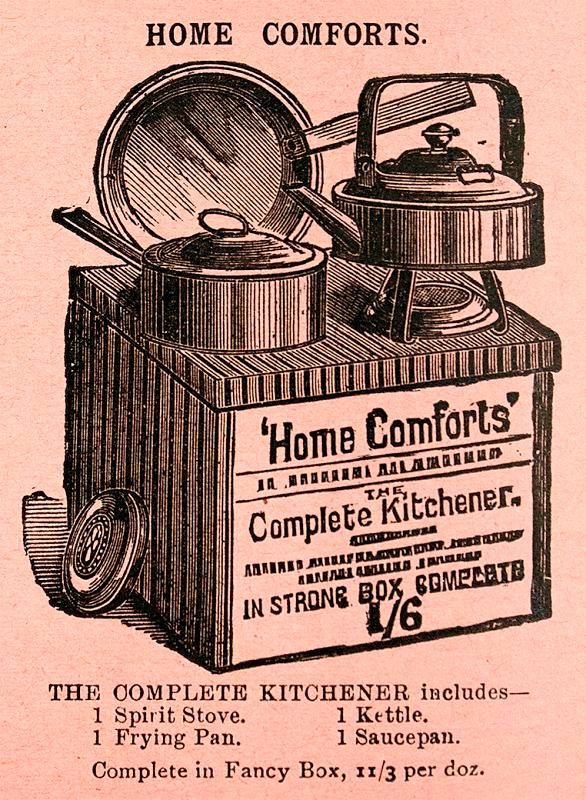 Fashions!: There are some rather attractive corsets on display here - how 'modern' would these have been once collected and did fashion take a while to keep up with the Joneses in the periods covered?

Corsets were essential items in any nineteenth-century woman's wardrobe. Infants of both sexes often wore unboned corsets—known as stay bands—until the age of about six when girls graduated to a lightly-boned corset and finally to the full adult version.

When a tiny 'wasp' waist became fashionable in the latter half of the nineteenth century, girls would subject themselves to the most frightful torture to look the part. In the 1890s one dressmaker told her shop assistants that they had to achieve a 480 mm (circumference) waist or lose their jobs. A few even managed 420 mm, a circle that would measure about 134 mm from side to side. Go on, get out a ruler, and see what 134 mm looks like on you! 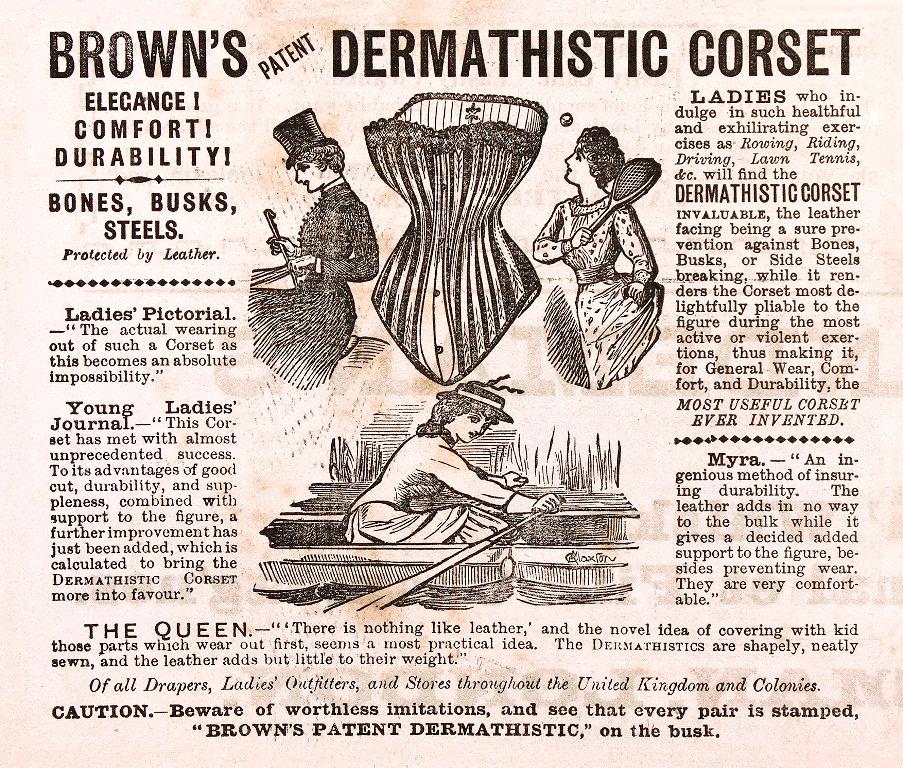 Illustrations were the forerunner of today's photographs prior to the broad use of photos - did you learn much about the Illustrators and the methods (woodcuts/engravings etc. ) used?

Illustrated advertisements only became common after about the 1870s, thanks to the popularity of the great illustrated papers of the period—publications such as The Illustrated Sydney News, Town and Country Journal and Australasian Sketcher— and it is interesting to see how advertisements changed over this period as sellers grappled with the challenge of making the best use of words and pictures. Before the introduction of illustrations advertisers had to rely on words alone to get their messages across, which makes some of the advertisements from this period the most interesting in the book.

In 1848, when Hobart baker John Dean wanted to explain to his customers why he had to charge 2½d for a loaf while his competitor was selling bread for 1¾d, he took out a lengthy advertisement in the Colonial Times. The fact that Dean was willing to take the time (and spend the money) needed to explain his actions in such logical detail is very persuasive and we can only hope the appeal worked.

When illustrations became available the lengthy messages disappeared and the language became strangely flat. Items were described merely as 'durable', 'reliable' or 'cheap'. Only towards the end of the century did advertisers start to get the hang of using words and images to maximum effect. 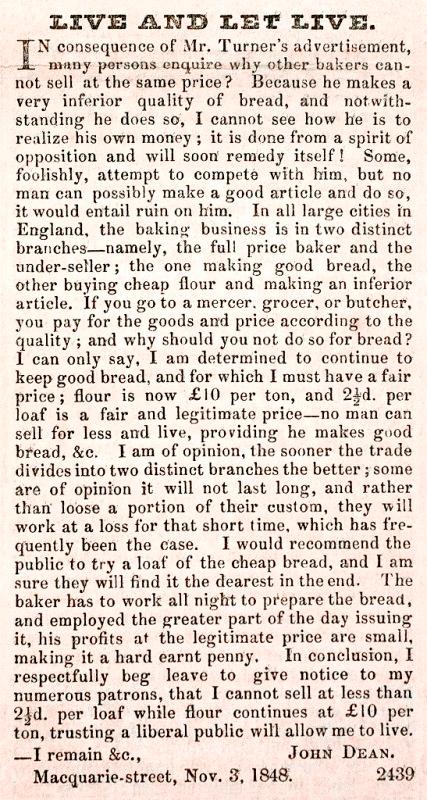 What are your three favourite items covered in the eight chapters categories?

It's hard to choose, but three of my favourites are: 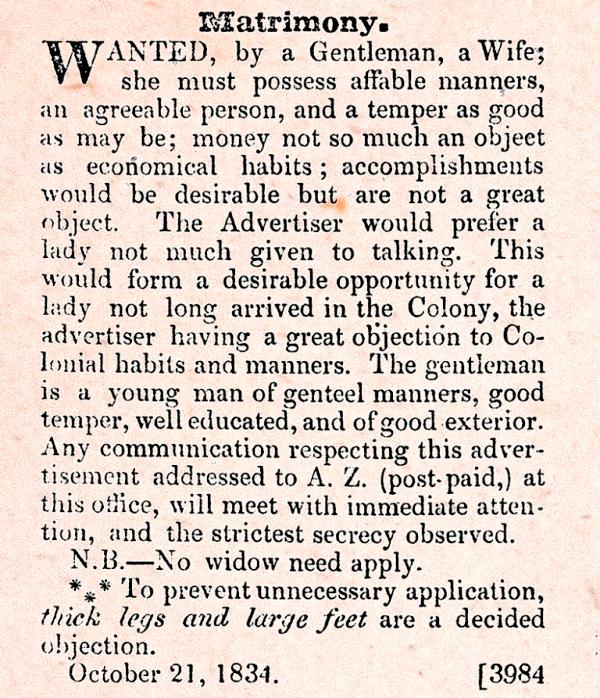 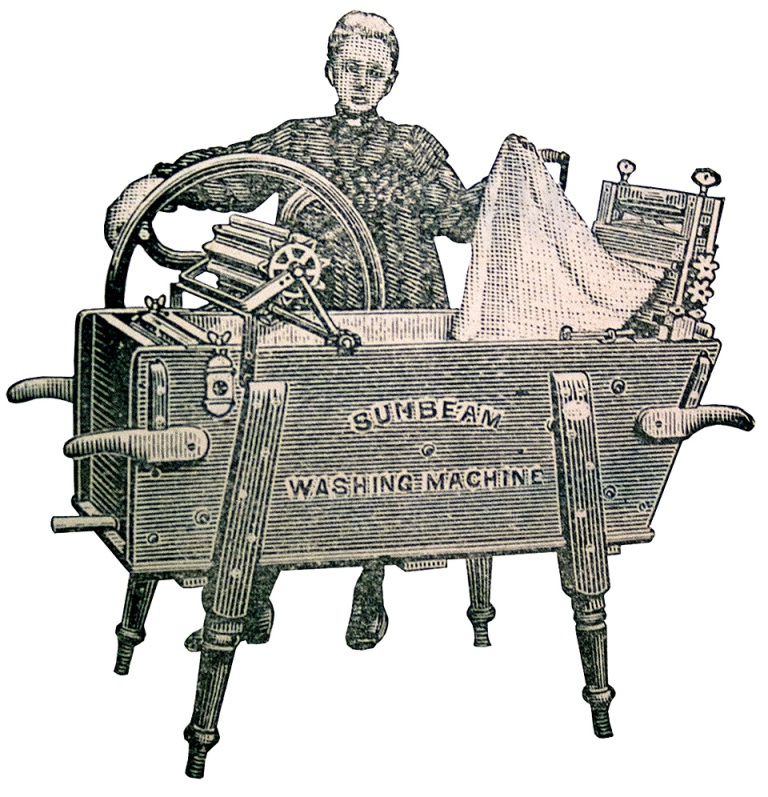 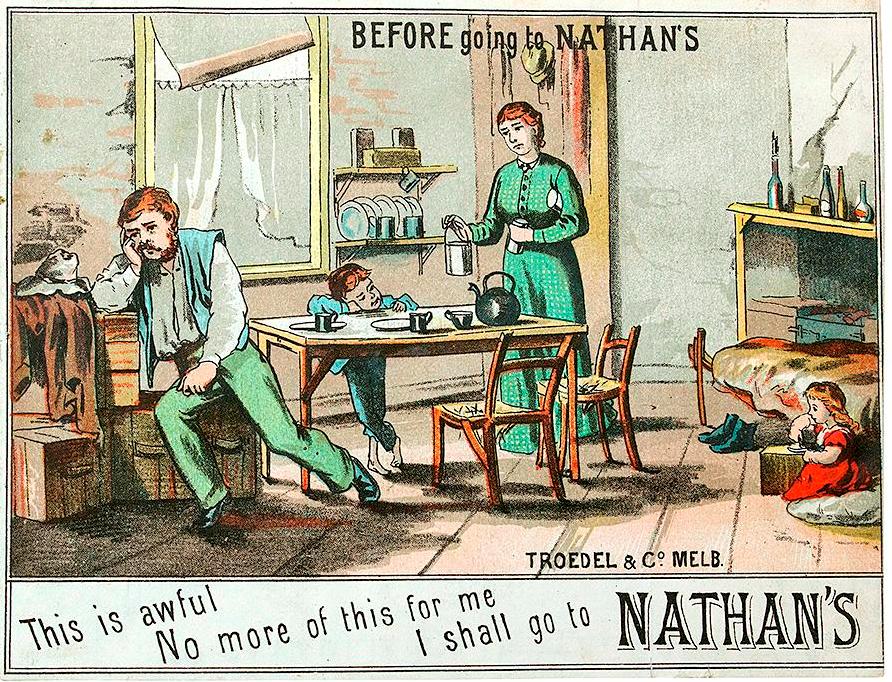 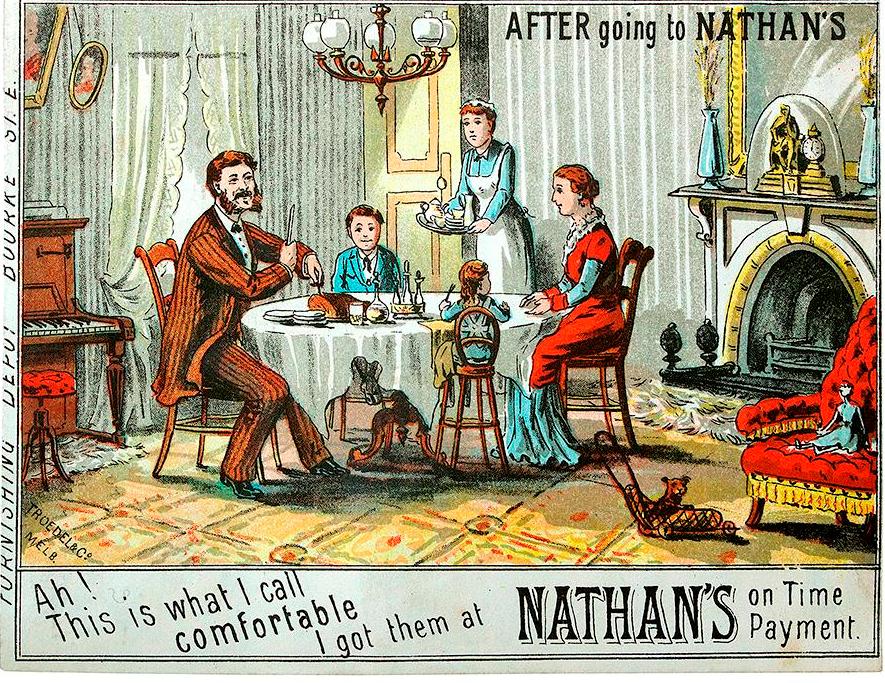 Edwin Barnard is an author and designer with an enduring interest in the everyday lives of nineteenth-century Australians. His previous books include Exiled for the National Library of Australia and the aforementioned Capturing Time - Panoramas of old Australia.

Emporium: Selling the Dream in Colonial Australia is released March 1st and you can buy it online from the National Library of Australia and in any great bookshop.