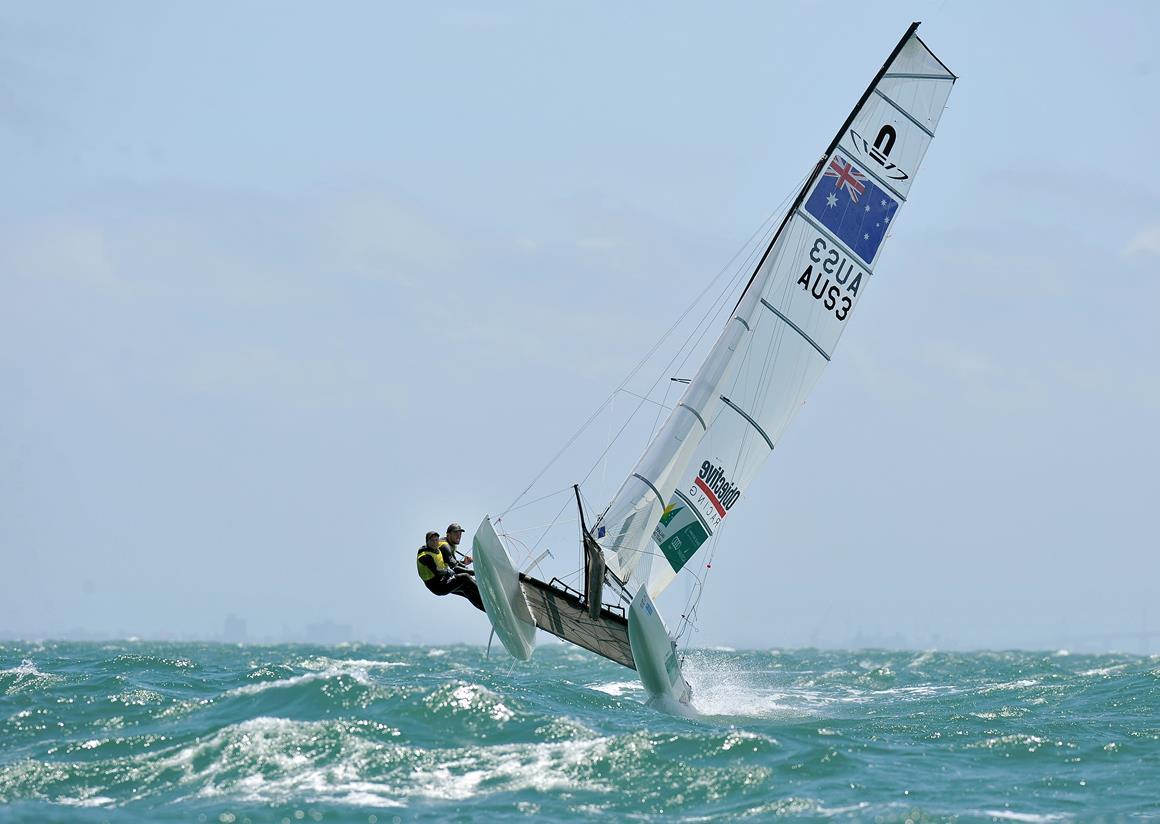 Above: Jason Waterhouse and Lisa Darmanin

Thursday 11 December 2014: Day four of the ISAF Sailing World Cup Melbourne produced the most thrilling action yet off the front of Sandringham Yacht Club, and the most drama. Southerly winds were manageable at an average 22-24 knots, it was the vertical rouge waves and cranky sea-state that brought on some seasickness, cancelled starts and reduced the original racing timetable. Four classes from the first session were sent out - Nacras, Lasers, 2.4mR and SKUD18 - and they all managed to put two more scores on the board. Photos by  Sport the Library -Jeff Crow.

The first day of Medal Racing at the ISAF Sailing World Cup Melbourne produced gold medallists in half of the Olympic classes and the Paralympic divisions announced their series winners.

Howling morning northerly winds gusting up to 30 knots had backed off to 17kts by the time racing on the Stadium course began for the weekend crowd gathered on the northern deck of Sandringham Yacht Club and enjoying the driest seats in the house.

The 49er skiffs opened the batting order and were blessed by the best of the breeze. By midway through the second Medal Race for the 49erFX, family, friends and members of the public watching the double point play-off saw the action unfold in slow motion thanks to the weak bay-side zephyr.

Temperatures continued to rise up over 30 degrees and squeeze the life out of the northerly, forcing a postponement in between the Men’s RS:X and Women’s RS:X deciding race and a long delay for the Nacra 17 fleet.

Their Medal Race start time came and at 17:30 the Nacra teams are ashore expecting official confirmation on their start time. If they are unable to race they will close out their series tomorrow. This creates some logistical challenges for crews with flights booked and other travel arrangements made to leave Melbourne this evening.

Men’s 470, Women’s 470, Finn, Laser and Laser Radial have their turn on the Stadium course tomorrow in the forecast morning northerly winds 15-20 knots shifting south to south-westerly 10-15 knots in the middle of the day. The classes that didn’t complete their qualifying series today will carry their current points forward to the Medal Races. Racing is due to commence at midday on Sunday December 13, 2014.

A cautious start put them sixth place around the first mark and from there the Chazz Michael-Michaels and Jimmy Macelroy of skiff racing built a powerful performance in front of a cheering spectator gallery.  A sizeable pre-race buffer meant the gold medal sail-off was perfunctory, but still they entertained the crowd with their comeback.

“We had a good downwind and got closer to the pack and then sailed a really good second beat. There was a massive left hander and we were the only ones on port for some reason. We then got into the lead and spent the rest of the race just watching the action behind us,” Outteridge said.

“It’s awesome to quality for Abu Dhabi. We didn’t get a chance to go this year due to scheduling conflicts. This year we are the first boat to qualify and will make sure we have it in the calendar for next year,” Outteridge said.

The cool kids of the Olympic classes like to be fashionably late to the start and according to most Outteridge and Jensen in particular cut it fine, leaving the ramp at SYC 10 minutes before their Medal Race was due to start. Next up for the pair is racing against each other at the Moth Worlds at Sorrento, Victoria, in January.

The Australian Sailing Squad’s Joel Turner and Lewis Brake finished second overall and ahead of the first Europeans, Austria’s Nico Delle-Karth and Nikolaus Resch by 1.8 points.

Everything was riding on the Medal Race in the women’s skiff, one point separating first to third pre-race. The ultimate gold medallists Ragna and Maia Agerup (NOR) went out set up for windy conditions and found themselves in the wrong mode and over tensioned in the 6 knot breeze midway through the race.

“It was so nerve-wracking so much up and down and the shifts were coming from everywhere,” described Ragna. “It was hectic and a very tactical race, we were just doing the right decisions thinking all the time and we learnt not to give up. I’m so relieved. We are really happy.”

Winning the first round of the 2015 World Cup series and qualifying for the Final in Abu Dhabi is definitely a confidence booster says Maia. “We have been competing here for three years in a row; it’s good to see we can finally be competing for a spot on the podium. We are really looking forward to Abu Dhabi and the fact we already have that secured is such a relief.”

Second by five points were Norwegians Helene Naess and Marie Ronningen, who consistently delivered this week to remain in touch with the top of the scoreboard, as did third placed ASS athletes Tess Lloyd and Caitlin Elks.

“We were obviously pretty disappointed with how today went,” admitted Lloyd. “It was very tricky conditions, but it’s third overall and we are the first Australians which was our main goal. We are very happy to be on the podium ahead of the other Australian crews. Today gives us even more determination to keep pushing.”

Series leader Juozas Bernotas (LTU) was relaxed at the start of the day knowing that with his good results from earlier in the week he just had to finish the Medal Race to take home the gold medal.

In the puffy northerly breeze Dmitrii Polishchuk (RUS) was quick off the line and moved comfortably to the lead to take out his first win of the series while Bernotas recovered from a disastrous start to put on a masterful display of good tactics.

“It was really good racing,” said the gold medallist. “My goal was to have a clear start, a clear race and cross the finish line. I tried to catch Dmitrii, but I came second. To qualify for the World Cup Final is a really nice for me and not a bad Christmas present as well.” He hopes to now go to Miami for the next World Cup event.

On the overall pointscore Bernotas finished nine points ahead of Polishchuk and secured the first of the Men’s RS:X ISAF Sailing World Cup Final positions. In third place was a very disappointed Alexander Askerov (RUS) who finished 12 points behind after going DNF in the last race.

The Women’s RS:X line up was dominated by Europeans and Russia’s Stefania Elfutina a cut above the rest. Her final net points tally was half that of the second placegetter, Australia’s Joanna Sterling. Both have qualified for the ISAF World Cup Final next year and for Sterling it’s her first World Cup podium finish. The bronze went to Norway’s Maria Aadland Mollestad.

“Today was really difficult and interesting because wind was shifty and not stable, it was hard,” said the gold medallist back on the beach at SYC. “I did really bad start then first upwind I was pumping and second upwind the wind was 2-3 knots, it was so hard to pump.

“I finished second but I have a lot of points in front so now I am first. I am happy because it’s a World Cup, and really tired. It’s a dream to race in Abu Dhabi with top leaders but I should work much more harder to show the same result.”

It’s been a successful return to racing for London Paralympic gold medallists Dan Fitzgibbon and Liesl Tesch (AUS/AST). In the final day of the series the duo put away another two wins, but not without some good competition from the fleet.

Tesch noted that the rest of the fleet showed improvement over the week. “There were lots of changes of results. That is really important for Australia going ahead with its Paralympic SKUD class. You know we only won the last race by a metre. That was fantastic,” she added.

“It’s been a good training regatta for us and I think we have improved during the week. We now have Christmas off and then head to Miami for the second of the ISAF Sailing World Cups. The regatta was also good practice for us as we have the world championships here next year,” Fitzgibbon added.

Paralympian and AST athlete Matthew Bugg couldn’t wipe the smile off his face as he described his final outing at the ISAF Sailing World Cup - Melbourne as another perfect day on the race track.

With two firsts to wins to close the series Bugg comfortably secured first overall. “It started fairly windy today, but then dropped off quite quickly. The second race was a light air race which I am always quite good at,” Bugg said.

First place in Melbourne is an encouraging start to his 2015 racing season as he prepares to head to Miami for the next World Cup event.

Second overall on the pointscore was Paul Francis (NZL) and in third was Peter Russell (AUS).

Event winners from each ISAF Sailing World Cup regatta qualify for the 2015 SWC Final while the best placed ‘home continent' sailor in each round also qualify. The top three finishers at the 2015 Class World Championships (if already held) will qualify to the 2015 SWC Final. The remaining SWC Final places will be awarded via the ISAF World Sailing Rankings.

The following sailors have qualified as winners and/or as the home continental representative for the ISAF Sailing World Cup Final to be held in Abu Dhabi in November;

From 25 January to 1 February 2015 the second event of the ISAF Sailing World Cup in Miami, USA returns to the waters of Biscayne Bay.

Results for all Invited classes are available at http://sailmelbourne.com.au/website/results.html 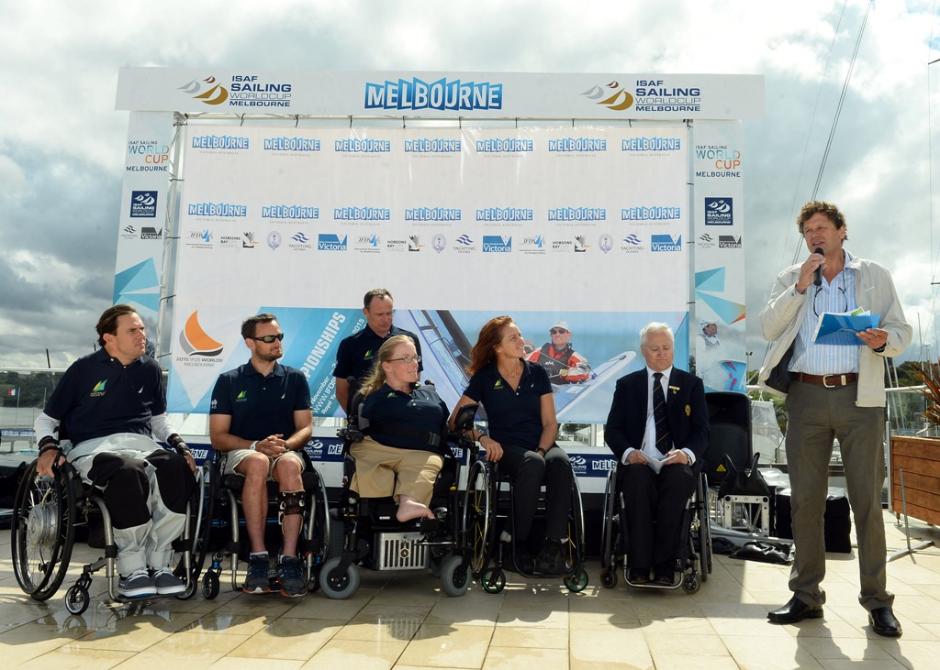