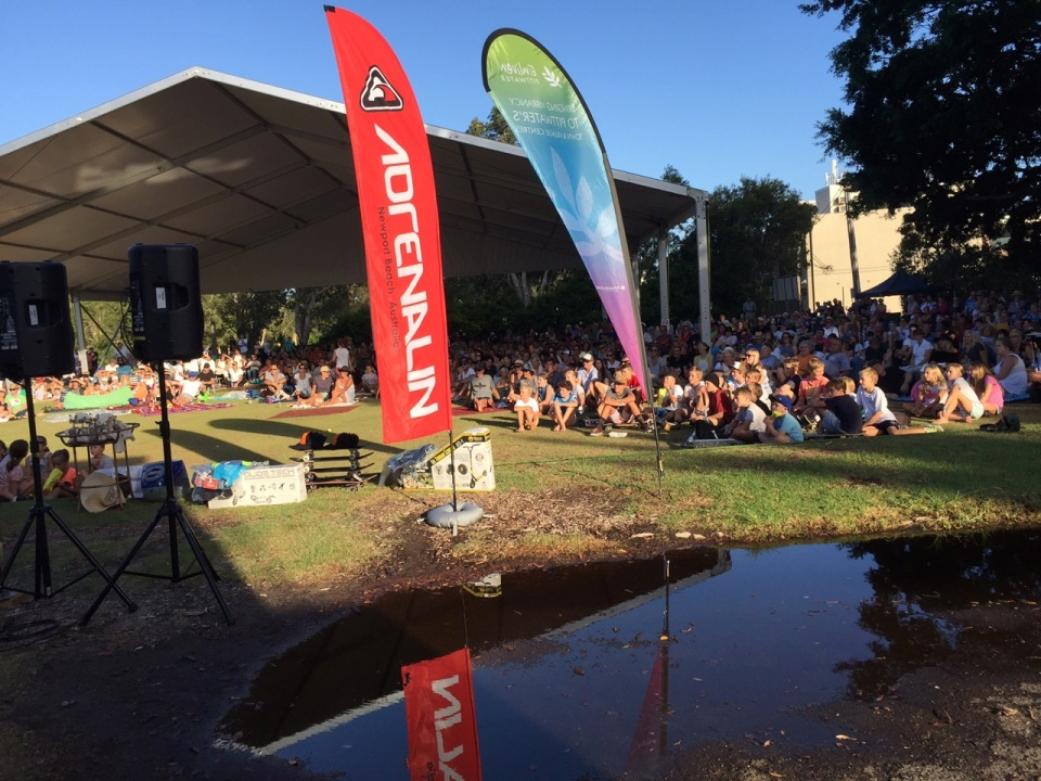 The Creative Creatures Film Festival drew an audience of 1,000 to Avalon Beach Bowling Club for its fourth festival on Sunday February 21st, 2016.

It was a case of apples and oranges among the Willbe winners this year, puns intended!

With an MC in local painter Paul Sinclair (AKA Gravy) who made his Dorothy inspired dress and painted his own 'very uncomfortable' red shoes, a ‘there’s no place like home’ film journey through some of the best offerings in the Creative creatures film festival to date kept everyone from 3 to 93 well entertained.

“He was an absolute star among stars” said festival founder and organiser Katy Young.

The Wizard of Avalon in his Sunday best??!!

Katy and Paul - the Close-Up!!

The Theme 2016 for a new image or reference to be included in everyone's 3 minute edit was to relate to: “recycling”, plus one only of the previous year items of a rabbit, wave or apple.

This years over 16yrs winner was Mathilda Robba for her film 'Mission Orange' which was beautifully shot, cast and directed and worthy of winning the $1,000.00 first prize and Gold 'Willbe' trophy sponsored by local post production house Rash Media.

The winner of the under 16 yrs 'Willbe' trophy were a group of lads from Northern Beaches Christian School for their film 'The Apple'.

Nic O’Keefe, Matt Watt, Miles Johnston and Nelson Pyl, all boys from Northern Beaches Christian School won the Gold "Willbe" for under 16yrs for "The Apple" and showed us...Apples can take you anywhere!

Creative recognition prizes including ‘best actor’ and ‘most out there’ were donated for the fourth year in a row by local surf brand Adrenalin.

Euan Harris who won 3rd place for under 16yrs for "Seth" (seen in pic with him) and also received a commitment to film making after entering the festival for all 4 years.

The all weather tent, which was paid for by local shops and businesses due to last years downpours, was put to good use in the morning when the heavens opened up, and ended up providing much needed relief from the bright sun in the afternoon.

The 1,000 strong audience enjoyed soulful tunes from Nativosoul who have played at the festival all 4 years, free choc tops from The Avalon on Avalon Beach, great food from Lucy's diner and a fabulous range of films which did the film makers proud.  Av Bowlo, as it is affectionately known, sold cold beers and the festival's silver sponsor Joiy Wine introduced their bubbles to the very receptive crowd.

A wonderful festival vibe from beginning to end showed the audience love this local festival.

The Creative Creatures  Film Festival will continue with a new image or reference item to be included of 'Red Shoes' for those films that will debut in February 2017.

This year’s films will be loaded into the Creative Creatures website this week.

One of the winners shown below