Yesterday Liz Kelly of the Learn2Swim program at Narrabeen Rockpool and Sally Powell of the CEC (Coastal Environment Centre) in Narrabeen allowed us to accompany them and children from the swimming classes on a Coastal Platform walk. The two hours we spent with them were great; informative, educational and good fun. To begin with Sally spoke about a few safety rules such as not running on the rocks, slipping over and falling on oyster shells and to not touch anything they could not see (not put their hands under rock shelves) as there are, although rare, poisonous Blue Ringed Octopi in the area. Sally did want the children to feel those marine molluscs and animals which she would be telling them about though so they could notice the textures and differences between sea plants, shelled living rock platform residents and the many kinds of sea snails and sea stars in our seashore backyard.  Looking and listening are always better in learning experiences where you get to handle what is being spoken of.

Each child was then given a beautiful poster on rock platforms by Liz as well as information sheets, a colouring in page and information on how all of us can contribute to helping look after our coastal environment.

The environment we were venturing into was defined as an ‘intertidal area’ (sometimes referred to as the littoral zone), and described as the area that is above water at low tide and under water at high tide (in other words, the area between tide marks).As we headed down the path to the pool Sally asked us to pause and look at the sign reading ‘Narrabeen Head Aquatic Reserve’ explaining that this means it is a marine reserve and similar to a National Park or bush reserve with the same restrictions on not damaging or taking away anything you find there.

Some information about what we saw here, with a big thanks to twins Riley and Keira, Clare and all the other great children who were assistants in helping us photograph them, is below.

Sea Snails: same as garden snails almost; they are herbivores; eat algae and the beautiful patterns of their tracks we see in the sand that gathers on the rocks is their movement in search of this food. This is what they look like:

Sea Stars: camouflage themselves by becoming same colour as rocks they are on. Will also ‘grab a lift’ off the sea snails by attaching themselves as snails are faster then them. This is what they look like:

Sea anemone: these felt a bit slimey and soft in places. This what they look like:

Starfish; can flip over as has all these legs when we put them on their backs; eating a bit of octopus in this photo. A 'flip back over demonstration' by Sally and one that was bright red-orange:

Chiton: has an articulated shell. They are small to large marine molluscs, and are sometimes called 'sea cradles' or 'coat of mail shells. “Looks like a cockroach!” said one of the children. This is what they look like:

Clam: a burrowing bivale of the mollusc family. This is what they look like:

Elephants snail (mollusc): named for the way they swing their tentacles from side to side; This is what they look like from on top and from underneath:

Sea Hare (Hairy Sea Slug): they have a soft body, a small internal shell and large 'wings' or parapodia, which can be used for swimming. They too are molluscs. This is what they look like out of and in the water:

While handling these molluscs without shells Sally said: “wet your hands first and then you won't hurt them. They live in the water and get sick if out of it too long"

Sea scallops: are in the mollusc group called 'bivalves'. The name "scallop" is derived from the Old French escalope, which means "shell". This is what they look like:

Periwinkles: these are a small edible sea snail, a marine gastropod mollusc that has gills and an operculum and have dark or black  coloured shells. This is what they look like:

Neptune’s Necklace (sea plants): like all plants, even sea ones, they need sunlight to photosynthesise and this is why you find no plants in the depths of the ocean and why these ones are so close to the saltwater’s surface.

Sea Kelp: grows off the rock shelf; the spikes are ‘shock absorbers’ to help it not bump too violently and damage itself. It has a mucus component which protects ot from the sun, like a built in sun block. Here Sally is holding one up for the children to feel its textures:

Conniwinks Shells and eggs. (Sally was down here two weeks ago and there were masses of them filling all the crevices on the rock shelf). The shell here has a few 'freeloaders' catching a faster ride;

Cowrie shell: some cultures use these for money, also attractive to sea shell collectors but mmust be put back when found in an Aquatic Reserve.

Skin of an octopus shed; until held this looked similar to a  piece of plastic discarded by a litterbug.

Holdfast; (sea plants: which to the girl who brought it to Sally to be identified and named was “Like a lollipop”: they are the rootlike structure that some plants and algae use to attach themselves to sea rockshelfs.

Zebra Snails have a black-and-white striped pattern on the shell.

Limpet with barnacles on it: Limpets are a marine gastropod mollusc that has a low conical shell. Barnacles on top are are marine and estuarine crustaceans and related to crabs!

The children thought the colourful variety of some shells were; “like Rainbows”. Of the Starfish;  “beautiful colours”; the gardens under the sea and on rock platforms of salt water and salt air.

The many marine gastropods present beside each other illustrated the difference between Herbivores and Carnivores in this sea snail world. Sally explained that the Mulberry Whelk (named for pattern/bubbles on shell structure)is a carnivore whereas a Conniwink is a herbivore; you can tell by turning them over and looking at their mouths what kind they are;’ herbivore or carnivore.

Even though the rock shelf was fully exposed when we first began the tide started to roll in and a rising swell was an opportunity for Liz to remind the children about safety in these environments; “We must always be careful on rock platforms and watch the waves. A good thing to remember is every seventh or 9th wave is the biggest in a set.”

Liz completed the Coastal Ambassadors Program, the highly regarded CEC Program that is now being integrated across NSW. Her brother Ian, a member of Newport Surf Club who completed the same course a few years ago, also runs a program, his project is Newport Reef with the Nippers aged 8, 9 years old. This Club has the programme running yearly with the Nippers. Liz also plans to conduct a yearly tour and shared information on how others may get involved with this great initiative:

The Coastal Ambassadors Course is funded by the NSW Natural Trust (Sonja Elwood, CEC) has all the information you require on the exact requirements. It is generally run through Surf Life Savings NSW as an education programme for Surflife Saving members and how as a group they can impart ecological programme within the Club Community and the community in general. Sally Powell is also part of this program, and recently has been teaching Primary School children about stormwater drains and how everything that goes in these flows out to our lagoons and the ocean. Sally also teaches High school students about our catchment and marine environment, and is at the Manly Environment Centre.

Fortunately we didn’t encounter any plastics or discarded fishing tackle on this platform yesterday or see any of our shorebirds with fishing hooks in their beaks or lines dangling from their mouths as we have in years past. Perhaps due to the to the way this particular rock shelf has no boulders on its shoreline in which to ‘hide’ such refuse. Narrabeen Lagoon’s foreshore and on North Narrabeen Beach front is not so lucky and an abundance of line, bait bags, hooks, sinkers and glow stick wrappers are left lying on the sand or in the water. These drown, cause infections or starvation through being unable to eat when they come into contact with our shorebirds. Hopefully soon we may see TAnglar Bins with multilingual signs at entrances to our waterways and beaches so visitors can dispose of these items properly.

The children really enjoyed being introduced to the world that thrives on our coastal rock platforms. They are a daily reminder of how lucky we are to live here, to have this as our backyard and get to see the sea everyday and dwell in its gardens.

The Learn2Swim programme at Narrabeen has 80 children enrolled and teaches 50-60 of these each Saturday morning. Eight teachers oversee, on a one on one basis, these lessons. Liz Kelly who has been teaching here for 25 years, encapsulated what was the point of yesterday, apart from a great morning outdoors;
“Feed them now (about the environment) and they’re good forever.” 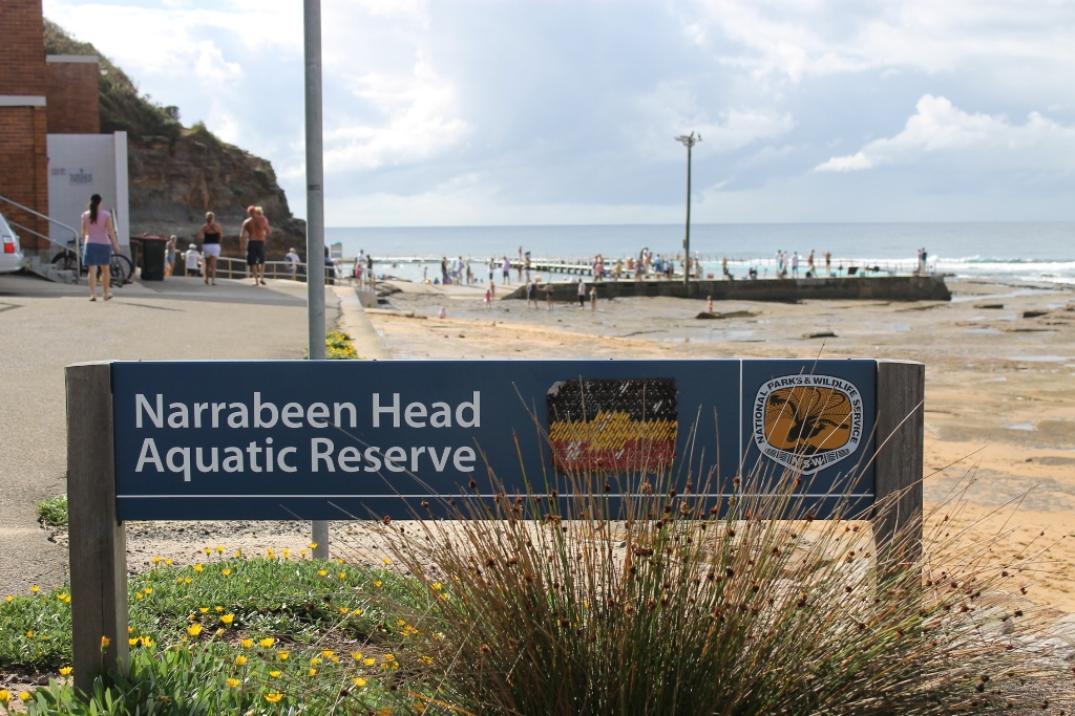