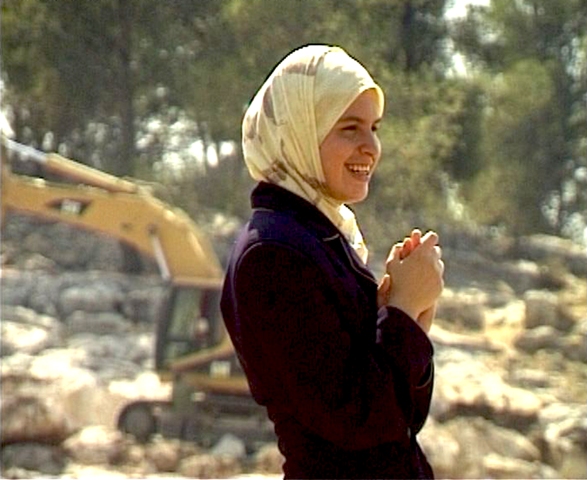 Above: Iltezam Morrar, 15 year old women's leader in Palestine village Budrus. Below: Budrus Fence; both images are from the film. 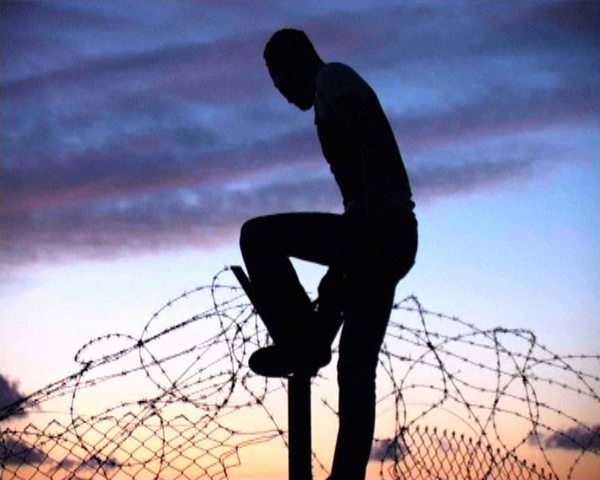 It takes a village to unite the most divided people on earth.
by Kath Moody

The award winning film “BUDRUS” was screened at  Avalon Baptist Church last Sunday 23rd Oct. The film was made by Julia Bacha from Brazil and shows the non-violent struggle of the people from Budrus village, whose lives were  being destroyed by the Israeli Separation Barrier.   The barrier was being built through the village groves of olive trees that had provided their sustenance for more than 3,000 years.

Led by a community organizer and his 15 year old daughter( who brought in the women) the villagers protested for many months and were able to unite the divided  factions even in that land of violent conflict . The village people were supported by Fatah, Hamas and many Israelis, in their protest. They were able to save the village.

This has provided an example for further non-violent protests in Palestine where the survival of Palestinian people is threatened by the loss of their land and livelihood. The success of non-violence is rarely mentioned in the Press.
The audience was moved by the film and also by speaker Dr.Vacy Vlazna. In a powerful and inspiring talk she compared the situation of the Palestinian farmers, who had been land holders for thousands of years, to that of our indigenous people and their battle for land rights.   She pointed out that those in power use similar  excuses in the dispossession of Palestinian people as authorities have used here in Australia.  She reminded us of the effects of our intervention as explained by Jeff McMullen who spoke at “Our Generation” screening in July. That film was a similar cry for respect, for justice and for land rights.

We were fortunate to have in the audience Professor John Sheehan a legal expert in native title and land rights from the University of Sydney and he was able to add valuable insights to the Q and  A session.  Professor Sheehan has worked also for Bedouin landowners in Palestine who have been dispossessed and was seen earlier in the year in a Dateline programme on SBS: (a Bedouin version of Australia's indigenous land rights  Israel’s Mabo? ... to reclaim land taken from his family by the Israeli authorities  www.sbs.com.au/dateline/story/about/id/601031/n/Israel-s-Mabo )

Mr David James from Amnesty International’s  Urgent Action network also contributed to the discussion.  Avalon Group of  Amnesty International were able to get many signatures to a petition in appeal to the Israeli  Government to  desist from the demolition of a Palestinian Primary School  under threat at the moment.
Dr Vlazna  said in conclusion: “Budrus affirms people  power . We, in democracies, have great power  because we elect  politicians who are in our service.  Unlike the people of Egypt, El Salvador, Burma, East Timor we don’t  have to risk our lives when demanding justice and yet the majority of us are passive or indifferent.

Activism for justice at all levels of life is a  profoundly spiritual act- and more so when we  demand justice for the Other, for the  vulnerable members of the human family whom we may never meet.

So let us use our power to write to our political leaders ,to relevant embassies in Canberra, to the media,  to demand justice and peace for Palestine and Israel. You don’t have to write a treatise- a single line is enough. It is your voice alongside other voices that matters.”
Dr Vacy Vlazna is co-ordinator of the website “Justice for Palestine Matters” www.palestinematters.com
Donations were made to Amnesty International.
Avalon Baptist Church and Avalon Group of Amnesty International Aust. served a delicious free supper of soup and rolls.  We plan to screen another film relating to human rights in March next year.   See: http://avalonbaptistchurch.net/