Australia’s most well-travelled multihull, Shaun Carroll’s black beauty called Morticia, is one of the starters for January’s Club Marine Pittwater to Coffs Yacht Race. Off the back of a busy 18 month Australian circuit the trimaran has just completed New Zealand’s Coastal Classic; a race skipper Chris Williams affectionately calls a “drag strip derby”.

Carroll and Williams have spent the last two years cutting down sail area on the Sea Cart 30 so it better suits the Australian adopted Offshore Multihull Rule. For the arbitrarily handicapped Coastal Classic from Auckland to Russell along the North Island’s eastern fringe, the plan cost them.

“Over there when you can’t get your multi to go fast enough you put a bigger rig in and big carbon or aluminum racks out the side, like an 18 foot skiff. In NZ it’s about being the person brave enough to glue extra bits on and put the most sail up. It’s like a drag strip derby. There’s horsepower to burn!”

Morticia was boxed up in a 40-foot container and shipped to Auckland for the country’s biggest yacht race. “It was a great experience that lasted 8hrs and 12 minutes. As I said to Shaun, it would be the most expensive 119 miles we’ve ever done, but it’s given us a new lease on life when it comes to the boat. The Kiwis really know how to sail their multihulls.”

Williams says it would be great if Australia adopted the same attitude to multihull racing. “Over there the two fleets have kissed and made up. The Coastal Classic is largest yacht race in NZ and it’s run by the New Zealand Multihull Club, and they invite monohulls to enter. A few Australian yacht clubs could take notice.”

For the second year the Royal Prince Alfred Yacht Club at Newport on Sydney’s northern beaches has invited eligible multihulls to compete in its major annual offshore event, the Club Marine Pittwater to Coffs Yacht Race.

Prior to the Coastal Classic Morticia’s 18 month program spanning Queensland to South Australia put 20,000 kilometres on the boat trailer’s odometer. On bouncing from event to event Williams say, “It’s been good fun. We’ve laughed a lot, drunk a lot of beer and had some success. The sweetest was defending our national multihull championship title at Port Lincoln in January.”

Two of the crew for the Pittwater to Coffs are qualified sail makers. All are good at talking underwater. The requirement for RPAYC’s Cat 2 race is five crew, though Morticia prefers less weight. At just over 900kgs suited up and ready to go, the tri is very light and agile – and tippy. “Once you know it’s limitations you sail it accordingly,” Williams assures.

So how much water comes over the decks? “It’s dry suits only, all the time. It’s an underwater experience 24/7. We all end up rather pruney, but we are never out there that long.” Still, Williams reckons there are worse boats to go to sea on.

Between now and start day, January 2, 2015 Morticia’s crew is looking forward to the Extreme 40s coming to Sydney Harbour in December. They’ll be the spectators drooling along the race track perimeter.

Straight after the 2015 Coffs race, when Morticia’s crew hope to defend this year’s PHS multihull overall win, the black trimaran will be packed up and put back on its trailer heading south to Geelong for the Multihull National Championships starting January 17th, and potentially the Festival of Sails immediately following. A couple of the crew will also be caught up with 16ft skiff and F18 nationals, making January one helluva busy month.

Darren Drew’s Pittwater based catamaran Indian Chief is up for sale and could be off his hands pre-Christmas. If that happens Drew has his eye on a Queensland based 50ft Crowther called Top Gun and says he could potentially turn a new acquisition around in time to be among his multi mates come the start at 1pm on January 2nd north of Barrenjoey Headland.

Sean Langman, another passionate peddler of the plusses of offshore multihull racing is returning with his Orma 60 trimaran, Team Australia.  The Club Marine Pittwater to Coffs multihull race record holder set a fastest time of 17hrs 3mins 5secs back in January for the 226 nautical mile middle distance race. Team Australia’s year has been low-key in terms of ocean escapades. Instead Langman and the crew have raced locally as part of Middle Harbour Yacht Club’s new Multihull Short Offshore Series for the 2014-15 season.

The Notice of Race and online entry is available from www.pittwatertocoffs.com.au / Applications for entry close Friday December 5, 2014.

Club Marine, Australia’s largest provider of pleasure craft insurance, is proud to be the title sponsor for the third year. 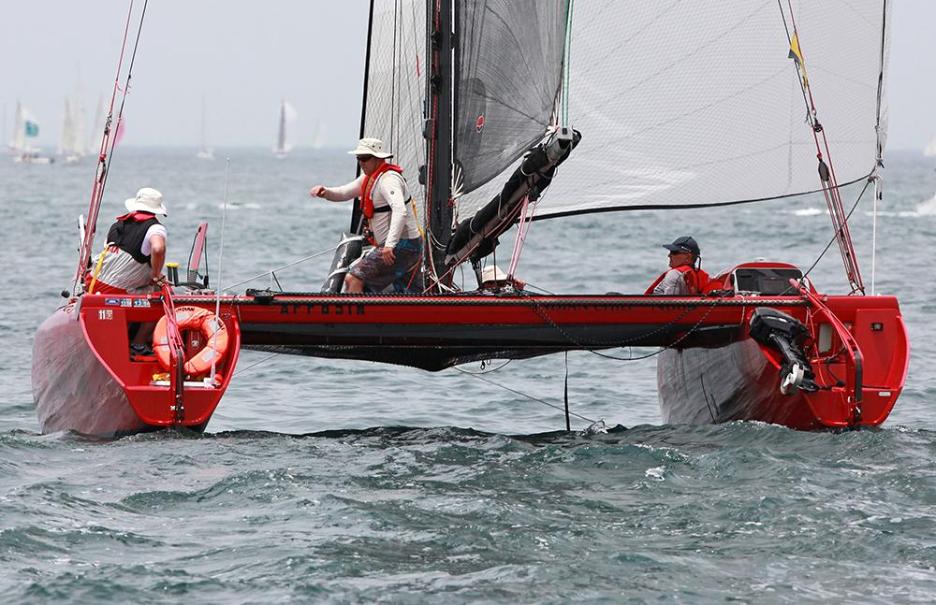 Darren Drew’s  Indian Chief at the start of the start 2014 Pitt water to Coffs Race. Photo by Crosbie Lorimer